bride Shamima Begum says she is afraid to die in her refugee camp after Syrian and Turkish forces surged at the war-torn border.

Begum, 19, is living nine miles from the border at al-Roj camp within Turkey’s ‘safe zone’ which they began pounding with artillery earlier this month.

The teenager from Bethnal Green, , no longer dons her black hijab but wears an open-faced cloak with a nose stud and trainers and says she keeps a bag packed at all times, ready to move fast ‘like in the early days of ISIS.’

‘I am scared, really scared,’ Begum told when they met her at the camp on on Wednesday. ‘I am afraid I could die here. The camp is very tense. We don’t know what is going on. When the Turkish offensive began many of the women here waited to take advantage of it to hurt those who had left ISIS.’ 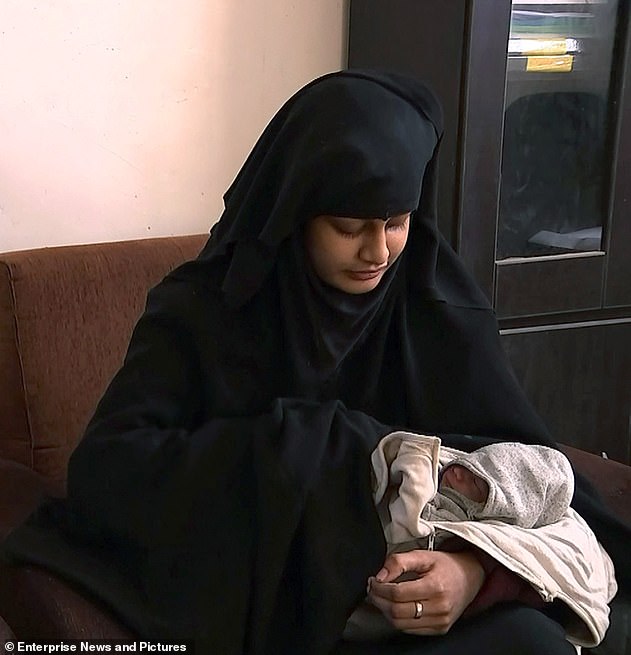 Begum, 19, is living nine miles from the Turkish border in al-Roj camp within the Turkey’s ‘safe zone’ which they ferociously began bombing earlier this month

Under the agreement reached between Russian President Vladimir Putin and Turkish leader Recep Tayyip Erdogan this week, Kurdish forces – who have been guarding some 10,000 ISIS fighters and their families – must withdraw from the buffer zone.

That encompasses Begum’s al-Roj camp and the authorities running it told The Times there have already been escape attempts by jihadists.

They also said women deemed to be disloyal to the so-called caliphate had been targeted in the diminishing security. 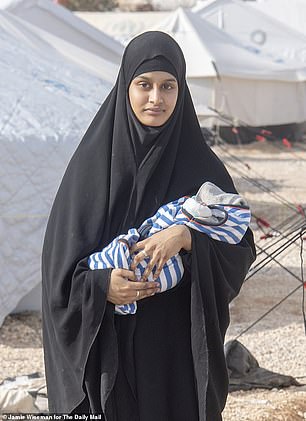 Begum said she was married 10 days after arriving in Raqqa to a Dutchman who had converted to Islam, Yago Riedijk, who she claimed was later arrested, charged with spying and tortured

Begum told The Times: ‘There is the fear that if the Kurds leave there could be chaos here, anarchy, and that our lives would be at risk from dangerous people in this camp. There are some psychotic women in here.’

She spoke to the paper the day after the Special Immigration Appeals Commission began hearing her case as her lawyers launched a bid to bring her back to Britain.

During the four day hearing Mrs Justice Elisabeth Laing is expected to deal with, among other things, whether depriving Begum of her British citizenship rendered her stateless and was therefore unlawful.

Individuals appealing to SIAC usually remain anonymous, however it is understood that Begum has waived her right to anonymity.

Begum told The Times: ‘I feel the only way I could have a normal life is to go back to the UK, it’s the only real option I have.’

Former Met Chief Superintendent Del Dabu said that Britain has an ‘international duty to give her the chance to come back to country and brought through the criminal process.

He said: ‘We have a responsibility as she was groomed on our watch.

‘We have to take responsibility for young girl’s who were groomed and influenced on our watch.’

Begum, then aged 15, was one of three schoolgirls – along with Kadiza Sultana and Amira Abase – from Bethnal Green Academy who left their homes and families in February 2015 to join a fourth Bethnal Green schoolgirl, Sharmeena Begum, who had left London in 2014, in Syria.

In February, Begum was found by The Times, nine months pregnant, at a refugee camp, telling the paper that she would ‘do anything required just to be able to come home’.

Begum said she was married 10 days after arriving in Raqqa to a Dutchman who had converted to Islam, Yago Riedijk, who she claimed was later arrested, charged with spying and tortured. 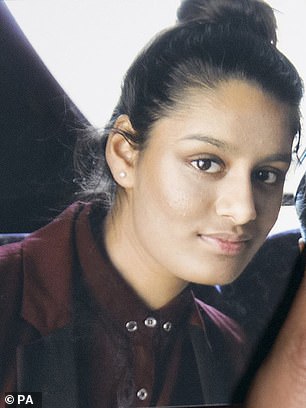 Shamima in an undated photo from police

She eventually left Raqqa in January 2017 with her husband but her children, a girl aged a year and nine months old and a three-month-old boy, both died.

Her third child, a son, also died shortly after he was born.

Riedijk, a 27-year-old jihadist from the Netherlands, has been placed on an exclusion list and is currently being held in a cell in northern Syria.

He has been banned from entering Britain because he poses a national security risk.

Riedijk was jailed for six years in his absence last year in his home country the Netherlands for membership of a terrorist organisation.

He has spoken about his love for his wife in an interview with The Times. He said: ‘We got very close very quickly. The perfect wife. She was so young and innocent’.

Begum told The Times she had ‘mostly’ lived a ‘normal life in Raqqa, every now and then bombing and stuff’.

She added: ‘But when I saw my first severed head in a bin it didn’t faze me at all. It was from a captured fighter seized on the battlefield, an enemy of Islam. I thought only of what he would have done to a Muslim woman if he had the chance.’

The Home Office revoked her British citizenship later in February – a decision which is only lawful if it did not leave Begum stateless.

It was speculated at the time that Begum may have Bangladeshi citizenship, but Bangladesh’s minister of state for foreign affairs Shahriar Alam has denied this.

Home Secretary Priti Patel told The Sun last month that Begum would not be able to return to the UK, telling the paper: ‘Our job is to keep our country safe.

‘We don’t need people who have done harm and left our country to be part of a death cult and to perpetrate that ideology.

‘We cannot have people who would do us harm allowed to enter our country – and that includes this woman.

‘Everything I see in terms of security and intelligence, I am simply not willing to allow anybody who has been an active supporter or campaigner for IS in this country.’

Last month Begum begged to come back to the UK to get therapy after saying she now hates the Islamic State (IS).

Since being part of IS she says she has given birth to three children, all of whom died from disease or malnutrition.

Ms Patel responded to her plea by simply saying: ‘No way, no way.’

Begum said: ‘My mental health situation is not the best.

‘My physical health is OK. I am still young and I do not get sick. That is not my problem. Mentally, though, I am in a really bad way. I need therapy to deal with my grief. It is so hard. I have lost all my children.

‘None of the people I am living with in here know what I have experienced. They are not like my school friends who I could always talk to. They do not understand what I have been through.’

Who is Shamima Begum’s lawyer? 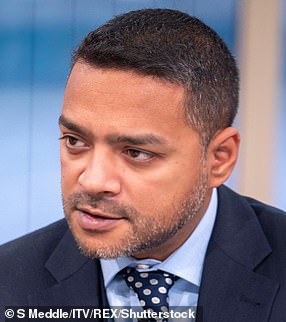 Privately-educated lawyer Tasnime Akunjee has represented the families of the three girls from Tower Hamlets, east London, who fled the UK to join Islamic State, including Shamima Begum, since 2015.

Since she was found in a Syrian refugee camp in mid-February, Mr Akunjee has caused controversy by comparing the 19-year-old ISIS bride to a First World War soldier and said she had been treated worse than Nazi war criminals. Mr Akunjee has been spearheading the campaign to get Ms Begum repatriated to the UK.

Previous clients of the criminal defence lawyer include one of Lee Rigby’s killers. He once blamed British authorities for ‘creating’ Fusilier Rigby’s killer, suggested Theresa May has ‘Nazi blood’ for trying to root out extremists and urged Muslims not to cooperate with police.

Twice married Mr Akunjee, 41, has worked for a series of law firms since 2008, while also working as a legal adviser to the East London Mosque.

It is believed he may have met the families of the runaway Tower Hamlets girls as part of this role.

Mr Akunjee said he is handling the Begum case ‘pro bono’, meaning free of charge. It is unclear whether that would continue if the case came before the British courts in future.

According to his LinkedIn page, Mr Akunjee, the son of a Bangladeshi doctor, studied at the £18,000-a-year City of London School for Boys.

He went on to study law at the Universities of Sussex and then Westminster.