Chaos unfolded at Uluru when a young couple tried to skip an enormous queue of climbers aiming to scale the sacred landmark before it officially closed for good.

Footage taken last week showed the furious climbers try to turn back the defiant couple as they made their way up the rock before its permanent closure on Saturday.

The video emerged as hundreds of climbers were forced to wait for hours for strong winds to die down on Friday so they could scale the rock for the last time.

Chaos erupted just after 11.30am, as the climb reopened and visitors from across the country and globe began sprinting up the sacred landmark.

The chair of Indigenous Studies at the University of Melbourne responded to footage of the large crowd lining up by tweeting ‘a curse will fall on all of them’. 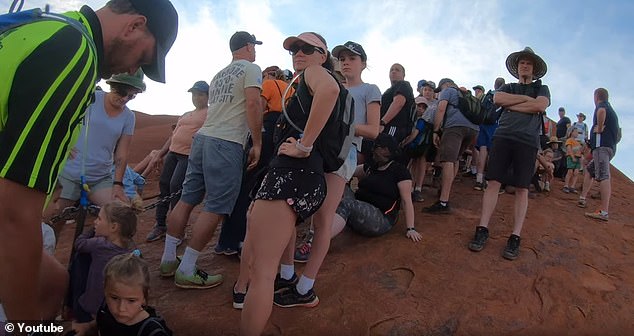 A young couple tried to skip an enormous queue of climbers to scale Uluru last week (above, furious group waiting in line). The climb will be banned forever on Saturday 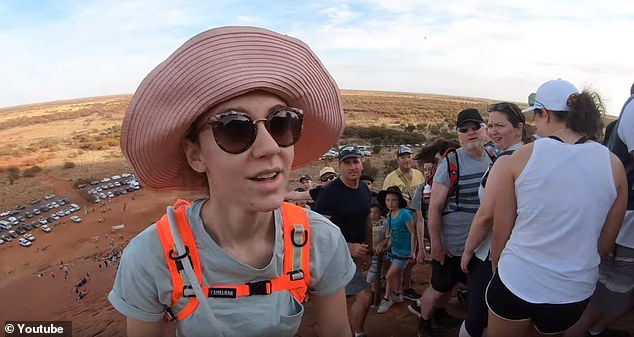 Despite the taunts from the crowd to climb the rock using the safety chain and wait in line, the defiant couple said they didn’t need the help and pushed in 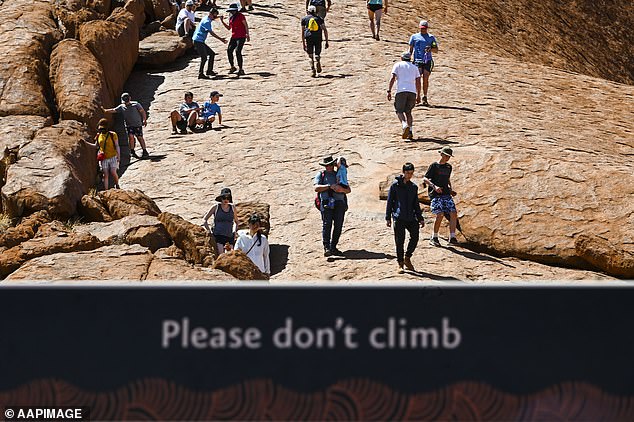 Footage of the young couple attempting to push past other climbers shows just how desperate travellers are to make it to the top.

The pair slowly walked up the side of the rock, past a line of waiting climbers holding onto the safety chain at the sight.

In an attempt to further antagonise the crowd they filmed the entire incident while egging the group on for a reaction.

A vigilant climber called out to the pair to stop and said they couldn’t go any further.

‘You can’t push in front of us,’ another one added.

Despite the taunts from the crowd to climb the rock using the safety chain and wait in line, the defiant couple said that they didn’t need the extra help.

An irritated climber claimed management would turn them back if they continued ahead.

‘You’re going to need the chain, let’s be real. Down the side guys. No one’s coming up,’ one climber said.

The climbers around him applauded and cheered, though the couple pushed on and continued their climb under the glaring stares of the waiting group.

A few more urged the couple to turn back, but they insisted, ‘We don’t need the chain.’

The couple finally scaled the summit without injury. 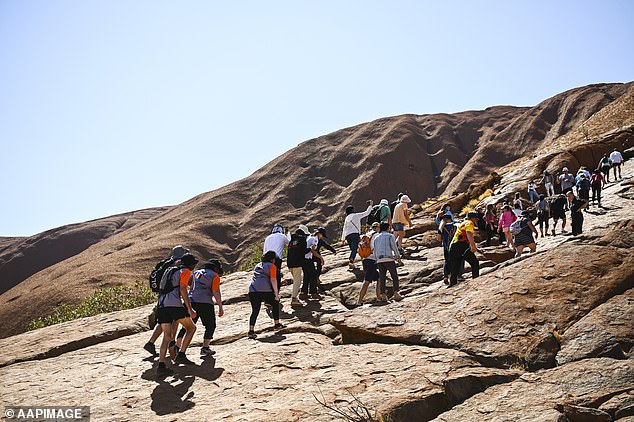 The climb was closed during the morning due to strong winds, but reopened just before midday 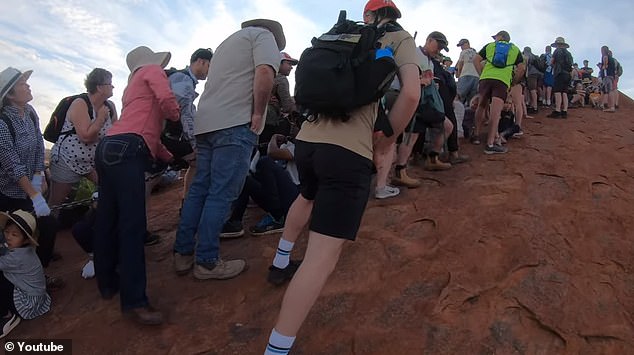 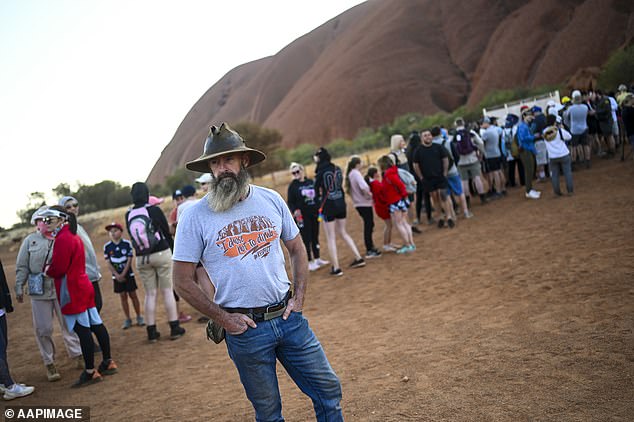 A local traditional owner, Vincent Forrester, booed at the crowd when they started climbing on Friday. Pictured above is a protester wearing a ‘I chose not to climb’ t-shirt

WHY DID ABORIGINAL ELDERS ASK FOR A BAN ON CLIMBING ULURU?

It was announced in November 2017 that climbing Uluru, considered a sacred site by the local Anangu people, would be banned from October 26, 2019.

Uluru-Kata Tjuta National Park’s board of management, made up of a majority of Aboriginal traditional owners, unanimously decided to close the climb.

Traditional owner and board chairman Sammy Wilson said on behalf of the Anangu people it was time to do so.

‘We’ve talked about it for so long and now we’re able to close the climb,’ Mr Wilson said. ‘It’s about protection through combining two systems, the government and Anangu.

‘This decision is for both Anangu and non-Anangu together to feel proud about; to realise, of course it’s the right thing to close it.

‘The land has law and culture. We welcome tourists here. Closing the climb is not something to feel upset about but a cause for celebration. Let’s come together, let’s close it together.

‘If I travel to another country and there is a sacred site, an area of restricted access, I don’t enter or climb it, I respect it. It is the same here for Anangu. We welcome tourists here. We are not stopping tourism, just this activity.’

On 26 October 1985 Uluru and Kata Tjuta – formerly known as the Olgas – were handed back to the Anangu people.

Hundreds of people started lining up from 4am on Friday to climb the 348-metre high landmark in Alice Springs.

But at 7am, when the rock climb usually opens, rangers put up a sign declaring it was closed.

This was in line with regulations requiring the climb to be closed when strong heat, wind or rain occurs, following numerous deaths at the rock in the past. The wind threshold is 25-30km/hr.

Hundreds of visitors and tourists quickly began moving toward to rock face to make the climb.

A local traditional owner, Vincent Forrester, booed at the crowd.

At the front of the queue early on Friday morning were Adelaide couple Joseph and Sonita Vinecombe, who flew into the area on Thursday.

Mr Vinecombe said they were aware of the cultural sensitivities around the climb.

‘You want to be respectful, and I do respect the issues regarding it. There’s thousands of people doing it and it is a conundrum,’ he said.

Behind them were the Derks family, including mother Kelly and her daughters Madison and Georgia, from Victoria.

Madison, 19, was climbing for the second day in a row.

‘It was good to climb it, you feel really proud, and you’ve got to do it while you’ve got the chance,’ she said. 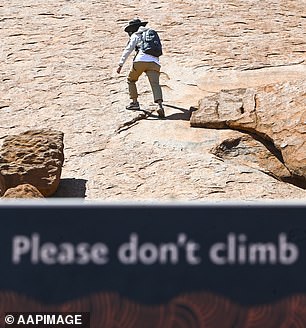 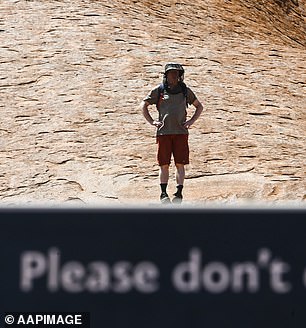 Pictured: Climbers begin their ascent up Uluru, in front of a sign that reads ‘please don’t climb’ 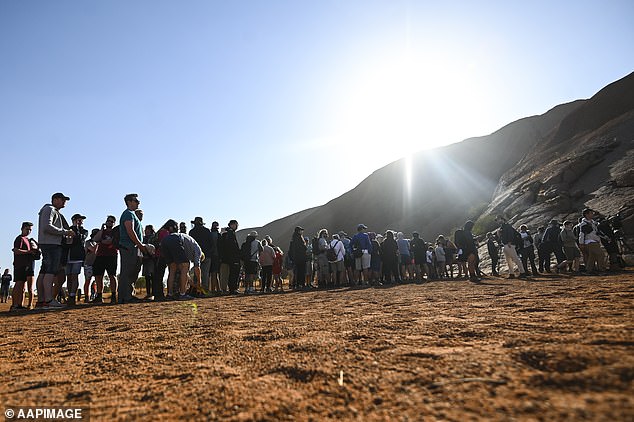 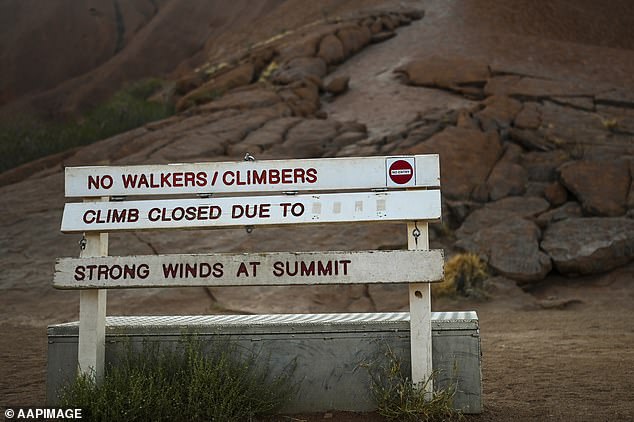 There were fears Uluru would stay closed on its last day due to high winds, but they died down and rangers eventually opened up the landmark

A mild 33-degree forecast for the area on Friday means the heat will not be an issue for climbers.

The rush to beat the ban on climbing the rock from Saturday, or crazy ‘climb fever’ as the Uluru Kata Tjuta National Park ranger in charge Greg Elliot calls it, has shown no signs of abating.

After the last of climber comes down on Friday, workers will immediately start removing all evidence climbing was ever allowed on the red sandstone rock, which is arguably Australia’s most famous landmark.

The chain handhold, built in 1964 and later extended, that enables visitors to get up and down the sheer western face of what used to be known as Ayers Rock, will also be removed.

The National Park board decided in 2017 to ban the climb from this Saturday, which marks 35 years since the land title to the Anangu was given back on October 26, 1985.

Uluru is a sacred site and of great spiritual significance to local Aboriginal groups, including the Pitjantjatjara Anangu traditional owners who live in nearby Mutitjulu.

The Anangu people will celebrate with a ceremony at the rock on Sunday night.

The scarring from millions of pairs of feet scrambling up the rock for decades will take a long time to erode, possibly hundreds of years or even longer. 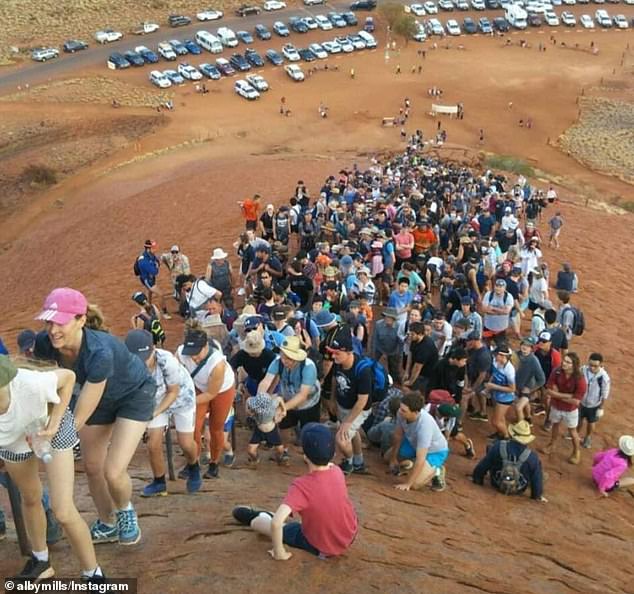 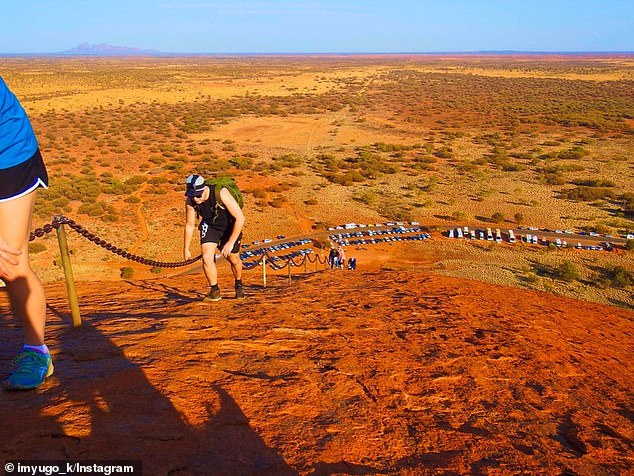 California slayings suspect yells 'I am not guilty' to...
Britain's greatest bridges: Historian travels the length of UK to chart nation's crossings
Grindr serial killer Stephen Port's drug dealer is found guilty of murder
Lolly-waving workman berates woman for leaving pet in her car
Prince William appears in high spirits as he dons a suit and tie for charity gala
Ukrainian passenger plane carrying 180 people crashes near Tehran - local media
Priti Patel faces fresh bullying claims as allies insist she is a victim of 'malicious gossip'
Goodfellas mobster who masterminded the Lufthansa heist to be released from jail because coronavirus