She suffered a close call on Wednesday after becoming trapped underwater in a lake.

And Emmerdale fans were unconvinced by Moira Dingle’s great escape from the lake as they questioned how she survived underwater for 15 minutes on-screen.

Taking to Twitter viewers quickly noted the on-screen blunder after Moira was accidentally knocked into the water, as husband Cain discovered her steamy affair with farmhand Nate Robinson. 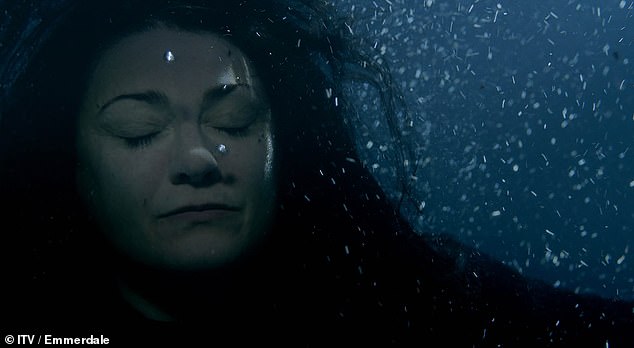 Bizarre: Emmerdale fans weren’t convinced by Moira Dingle’s dramatic escape on Wednesday, as they questioned how she managed to stay underwater for 15 minutes

In the dramatic scenes, Moira (played by Natalie J. Robb) was pushed into the water by the sail of her boat as Cain (Jeff Hordley) scuffled with Nate (Jurell Carter).

It came following the explosive bombshell that Nate was Cain’s son, which meant that he had actually been sleeping with his stepmother.

The scenes of Moira entangling herself in the weeds underwater lasted around 15 minutes on-screen, and she did not come up to the surface for air until the first ad break. 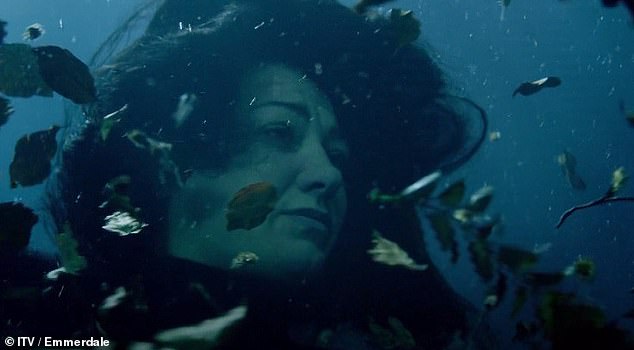 Close call: Moira was trapped underwater by some weeds after accidentally being knocked into the water, after her affair with farmhand Nate Robinson was exposed 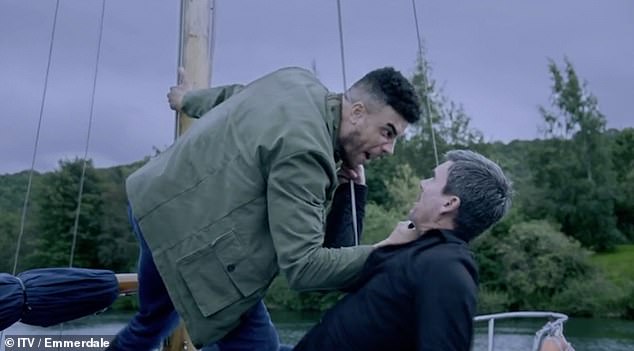 Scary: In an episode fraught with drama, Nate dropped the bombshell that he was Cain Dingle’s son, meaning he had actually been sleeping with his stepmother 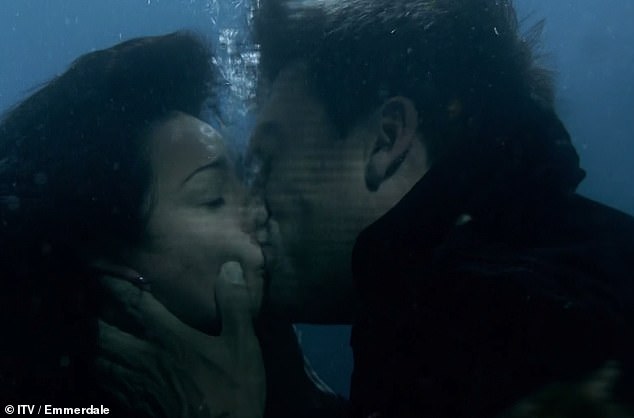 Made it out: Cain rescued Moira and gave her mouth-to-mouth, but viewers were still bewildered that she survived being underwater for so long

Luckily Moira was eventually rescued by Cain who gave her mouth-to-mouth, but viewers were still bewildered that Moira could have survived the ordeal.

One tweeted: ‘So Nate’s spluttering like mad after being knocked into the water and Moira was underwater for 15 minutes and isn’t even coughing?’ 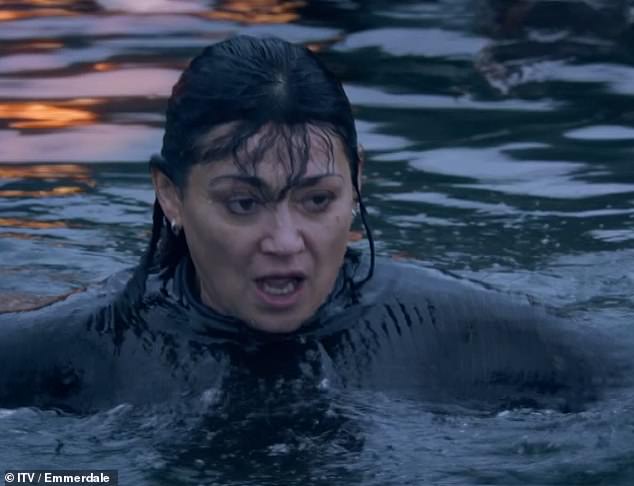 She made it! Eventually Moira made it to the surface, but several viewers pointed out that she had been underwater for around 15 minutes on-screen

Odd: Several viewers took to social media to point out the lengthy time, questioning the unlikelihood that someone would survive underwater for so long

One fan also posted: ‘For somebody who virtually drowned five minutes ago, Moira is pretty alert and energetic.’

Another added: ‘Oh and how did Moira stay underwater for that long? She was unconscious at one point, her body would surely have tried to breathe? No f*****g way she’d survive that long.’

A third also tweeted: ‘Most far-fetched episode of #Emmerdale I think I’ve ever watched! How Moira survived being trapped underwater all that time I’ll never know! Disappointed after last night’s episode!’ 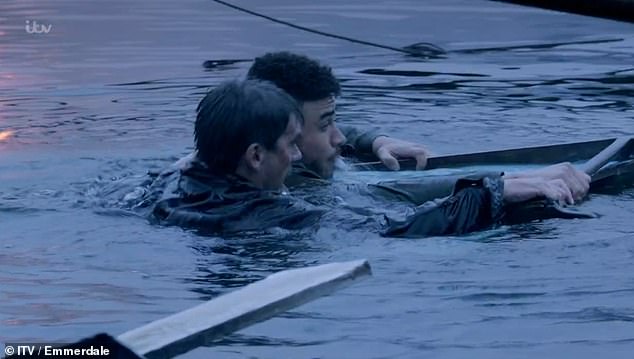 They made it! After the boat exploded Cain also rescued Nate, and it remains to be seen how they will move forward after the dramatic bombshell

Strange: More viewers then took to Twitter to question the impossible scenes, with one simple branding the show ‘far-fetched’ 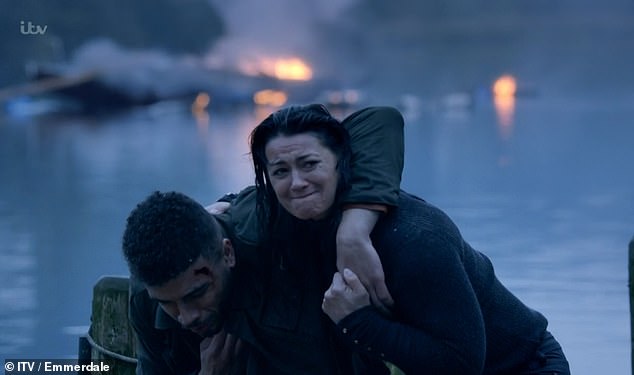 What next? Cain quickly abandoned Moira and Nate by the lake after rescuing them and it remains to be seen whether his marriage will recover from the infidelity

Despite the anti-climax of Moira surviving her ordeal, the episode still ended on a dark cliffhanger, as Cain abandoned her and Nate after learning about his true identity.

Nate revealed that he was Cain’s son and had been abandoned years earlier, and went onto imply that his affair with Moira was nothing more than part of his elaborate revenge plot.

It remains to be seen how Cain will cope with the news that he has a son, especially given the fact that he appeared to be seconds away from killing him before the bombshell.

Emmerdale continues on Thursday at 7pm and 8pm on ITV. 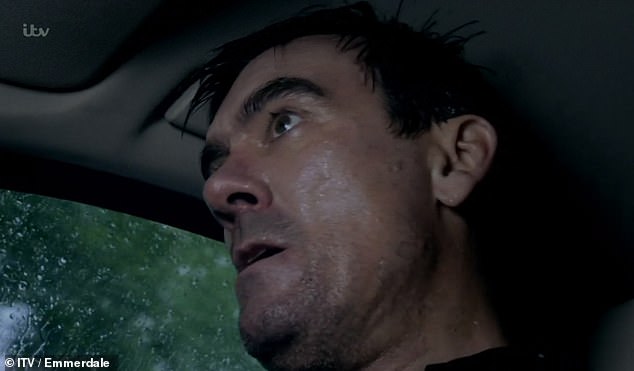 Back soon: Emmerdale continues on Thursday at 7pm and 8pm on ITV

Katie Price raps 'I love coke' as she dances at 'wild party in Mallorca'
Victoria Beckham looks sleek as she exits her Manhattan hotel in an all-black ensemble
Jessie J and Channing Tatum enjoy late night pool party with friends
Madonna faces backlash for performance at Eurovision Song Contest in Israel as fans call to BOYCOTT
Kate Moss 'angers celeb friends over ongoing loyalty to sultan-owned Dorchester hotel'.
Love Island: Curtis DUMPS Amy as he tells her he 'can't promise' that his head won't be turned
Ex of Winter Love Island's Connor Durman says split was recent
Sinitta suggests her on-off romance with Simon Cowell was 'never really over' until mogul had son