The British Tribe Next Door sees Moffatt and her family move into an exact replica of their County Durham home in Otjeme, a remote village in Namibia, complete with running water, electricity and wardrobes full of clothes – as well as WiFi.

The Moffatts are living alongside the semi-nomadic Himba tribe of cattle herders for a month in the show.

However, it has been slammed on social media, with viewers criticising Channel 4 for green-lighting it. 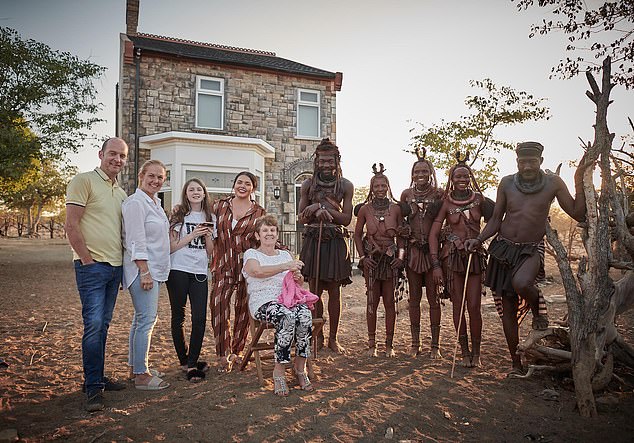 The British Tribe Next Door sees Scarlett Moffatt and her family move into an exact replica of their County Durham home in Otjeme, a remote village in Namibia 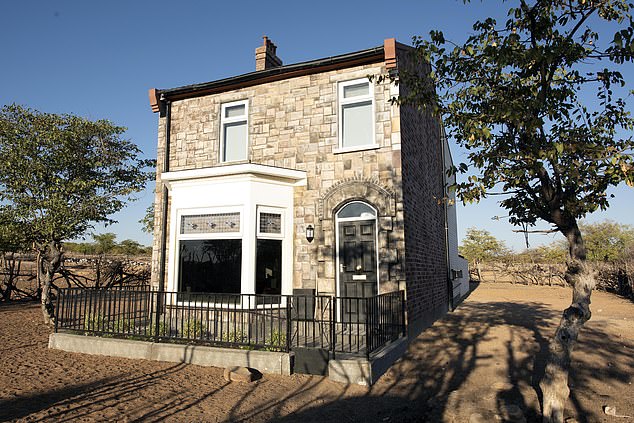 The Gogglebox star and her family had an exact replica of their house built in Otjeme, complete with running water, electricity and wardrobes full of clothes

And one of the Himba tribe even questioned the programme, saying: ‘We want livestock. What are we going to do with a house?’

Scenes from the programme include members of the tribe popping in for tea, taking a tour of the house and being astonished at seeing themselves in a mirror for the first time.

One user wrote online : ‘How on earth did @Channel4 think this was OK?? I’m totally shocked and appalled at #TheBritishTribeNextDoor’

Another commented: ‘Absolute gutter TV as Channel 4 start promoting The British Tribe Next Door. Culturally insulting and exploitative in the highest order.

‘Building a house on this tribes’ land is bad enough, then add a ‘reality star’, makes for grotesque TV!’

While a third added: ‘ Like……. Who the f*** decided that this ‘show’ would be a good idea? Building a British terraced house in the middle of an African village to prove what exactly?’

It was also branded exploitative, with one Twitter user commenting: ‘What the hell are Channel 4 execs thinking?The British Tribe next door is a shockingly awful idea -reality TV at its worst. It smacks of colonialism & cultural exploitation & will probably destroy the group who took part. Utterly irresponsible.’ 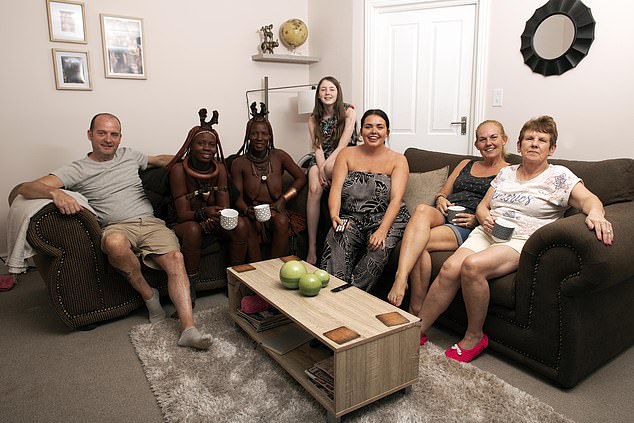 Scenes from the programme include members of the tribe popping in for tea, taking a tour of the house and being astonished at seeing themselves in a mirror for the first time

Tonight’s episode saw Scarlett show tribeswoman around her terraced house, with the guests commenting on how much ‘stuff’ the Gogglebox star has.

The Moffatt family had 20,000 possessions moved in, as well as running water and WiFi – with the nomadic Himba tribe forced to watch them enjoying their luxuries.

But one of the villagers admitted they were excited, saying: ‘We will see things we’ve never seen before.’

Another commented: ‘The height scared me. Who would sleep up there?

Scarlett said: ‘We have fresh bread and water, but I think our society is full of stress. It’ll be really interesting to live with people who live completely differently. I’m just really curious to see what they can offer us and what we can learn form them.

‘Most bonkers, bizarre, amazing thing we are ever going to do in our entire lives. I’m sh****** my pants.’ 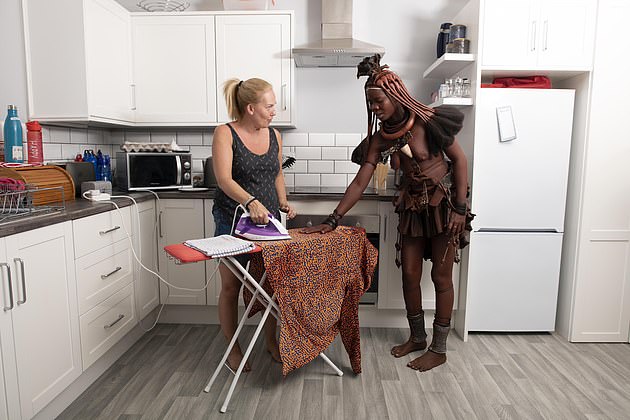 How we do it: Betty Moffatt introduces a Himba woman to the joys of ironing. The local women wear goatskin skirts, as well as a range of neck pieces and hair styles

During the show, the tribeswomen were stunned by the stairs, questioning whether they would fall off them.

They also asked Scarlett about clothes and why she doesn’t dress like them.

The Gogglebox star refused to take her clothes off and go topless like the tribeswomen, dressing in a swimsuit despite their pleas.

She said: ‘The idea of even walking about in a bikini makes me sick. It makes me ill thinking of people looking and judging. I’ve always struggled. Even when I was slim, I looked in the mirror and didn’t see someone I liked.

‘I’m really envious they can walk around with their boobs hanging out.

However, Kandiskio, one of the tribeswomen, said: ‘I find it very strange for a person to have so many clothes. Scarlett doesn’t need so many things. We just own a single stone to put our head on.’

Scarlett amazed the women by revealing she had veneers and nail polish.

They told her: ‘You should dress up like us.’

Scarlett replied : ‘I’ve been going to start a diet every Monday for about a year now. I think the last time I looked at myself naked in the mirror fully was when I was 18 maybe.’

The women are insistent though, with Kandiskio and her best friend determined to get Scarlett wearing the Hima clothes.

Kandiskio said: ‘I think if she wears them, she will feel confident.’

Scarlett admitted: ‘In our society,I think there’s a lot of pressure to have a perfect Barbie figure. Since I was young, I have struggled with body confidence. You always feel like why do people like me and you doubt yourself a lot more.’

The tribeswomen told the reality TV star that she was scared and lacked confidence, saying that people cover themselves with clothes because they are shy.

However, some viewers were more positive towards the show, praising it for its insight into the tribe’s life

Kandiskio went on to speak to Scarlett, saying: ‘I wish I had bigger breasts like yours. I want my tummy fat to roll. Like the creases of my finger. I want what you have.’

Scarlett was also stunned when one of the women found a tiny snake in the water hole.

Despite appearing to be the size of a worm, the women told Scarlett: ‘It is a very dangerous snake, it kills people.’

Scarlett replied: ‘I will never take water for granted again, just pouring from the tap.’

However, despite the negative reaction, there was some positive responses to the show.

Another commented: ‘I think The British Tribe Next Door is going to turn out as one of the most fascinating programmes I have ever seen. It’s not insulting to the Namibians, but a total wake up call for us. By the end of it, I bet we’ll all look differently at our lives.’

How to go vegan when your man’s a meateater (without killing each other!)
Citizens Advice is concerned the electricity grid won't cope with EVs
PETER OBORNE: I'll put this diplomatically, Baroness Scotland... sling your hook
PAUL THOMAS on... BBC's huge wages
Tate Gallery is 'on lockdown' and a teenager has been arrested after a boy was injured
Family of 'youngest death truck victim', 19, beg for her body to be returned home
Coronavirus UK: Prince Philip, 98, thanks key workers
Homeless 16-year-old carjacked Jeep then friend told him to drive to CHOP 'for safety'