Prime Minister Boris Johnson has today said that people traffickers ‘should be hunted down and brought to justice’, after 39 bodies were discovered in an Essex lorry container.

It comes as Home Secretary Priti Patel has also pledged for tougher sentences for human traffickers.

Police today began the task of identifying the victims, including a teenager, discovered at the Waterglade Industrial Park in Grays early on Wednesday.

Police said the lorry driver, a 25-year-old man from Northern Ireland, had been arrested on suspicion of murder. 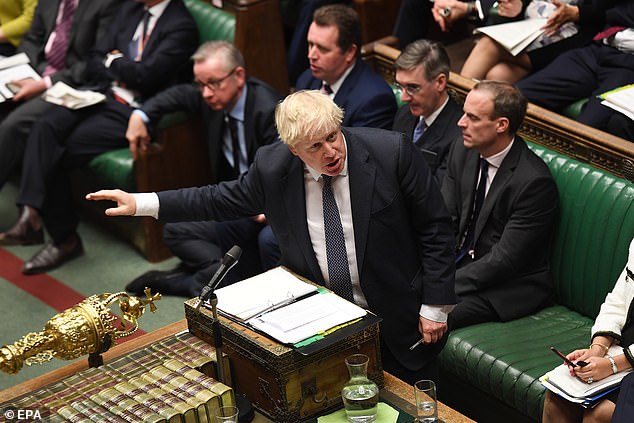 Putting the Brexit crisis aside, he said the ‘full force of the law’ would come down on those responsible.

He added: ‘I know that the thoughts and prayers of all members will be with those who lost their lives and their loved ones.

‘I’m receiving regular updates. The Home Office will work closely with Essex Police as we establish exactly what has happened.’

The lorry is from Bulgaria and entered the UK at Holyhead in north Wales, one of the main ports for ferries from Ireland.

Police have said tracking the route of the lorry ‘will be a key line of inquiry’ amid concerns it may have made its way to the British mainland unchecked by avoiding the ports of Calais and Dover, which have more stringent monitoring of people smuggling. 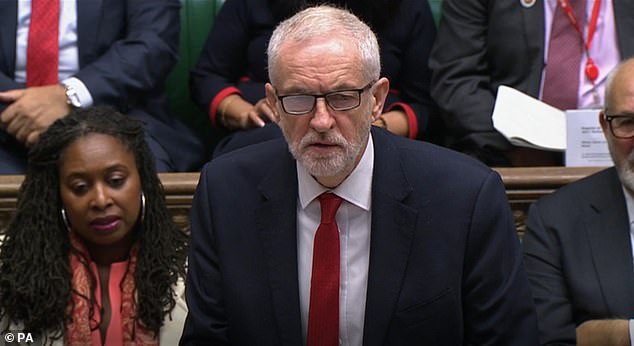 Jeremy Corbyn (pictured above) also reflected on the tragedy, branding it ‘unbelievable’.

He said: ‘Can we just think for a moment of what it must have been like for those 39 people, obviously in a desperate and dangerous situation, for their lives to end, suffocated to death in a container?’

Richard Burnett, chief executive of the Road Haulage Association also said drivers are targeted by the groups ‘week in, week out’.

He told the PA news agency: ‘It’s posed a massive issue to hauliers for years. 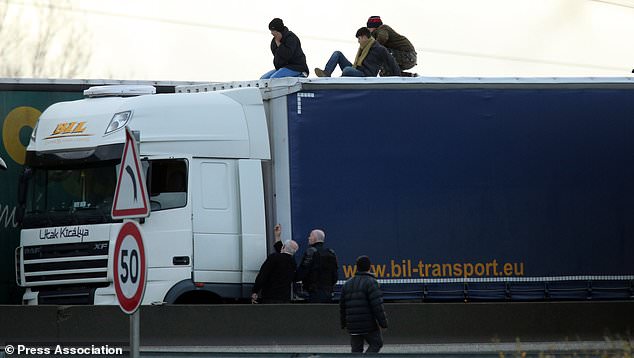 Migrants on the roof of a lorry as it moves along the A16 in Calais, France

‘There’s a set of rules laid out by the Home Office to ensure that hauliers and drivers are checking to make sure they haven’t got any migrants on board.

‘This has been a long term issue.’

Mr Burnett said several drivers have been attacked in recent weeks and one was ‘woken in the early hours of the morning by gun shots’.

Migrant gangs are ‘very sophisticated’ in how they go about accessing trailers, he explained.

Stars join thousands waiting to learn wildfire's damage...
Mick Jagger taking a month off after a routine scan discovered 'something untoward'
Miner who became Eurotunnel poster boy after punching through to French side is a BREXIT supporter
REVEALED - The secrets of England's stunning win including a Beckham team talk
Mission Control is back to its former glory: Apollo facility is restored 50 years after moon landing
Paul McCartney enjoys a Beatles reunion with Ringo Starr at the Abbey Road 50th Anniversary bash
Husband found GUILTY of shooting dead pregnant ex-wife with a crossbow
Spray that costs pennies and kills viruses instantly could be a simple solution to Covid nightmare