faces the first massive tests of his deal today as Remainer MPs try to kill the legislation in crunch votes.

The Prime Minister has fired the starting gun on a 72-hour dash to get crucial legislation implementing the package through – urging the House of Commons to ‘take back control’ from Brussels.

But MPs have voiced fury at ‘appalling’ efforts to rush the laws through Parliament in just three days, and the government is desperately struggling to fend off amendments that would keep the UK in the EU’s customs union or force a referendum.

Critically for Mr Johnson, former Tory rebels including Rory Stewart and Ken Clarke have indicated they could go against the government.

Downing Street has been increasingly optimistic that the numbers are in place to win the first big vote on the legislation tonight, known as the second reading. There are claims that Labour could abstain, although sources were playing the idea down this morning.

However, there are mounting fears that MPs will use the ‘Titanic Tuesday’ showdown to take an axe to the PM’s plans to push the measures through at breakneck speed.

Defeat of the so-callled programme motion – which sets out a tight schedule for passing the EU Withdrawal Bill – is essential for Mr Johnson to keep his ‘do or die’ vow to secure Brexit by October 31. 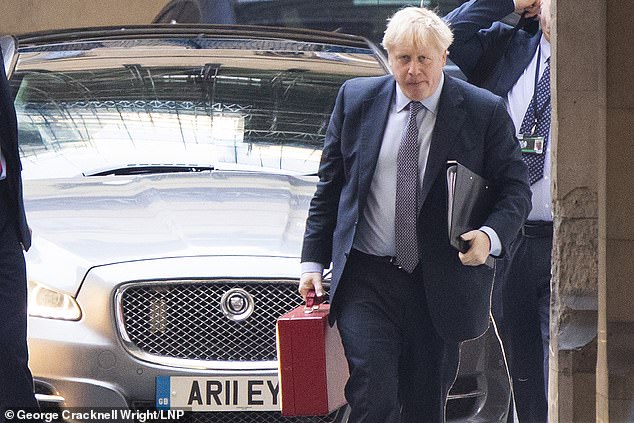 Boris Johnson has published his 110-page Brexit Withdrawal Bill just hours before MPs will debate it amid Commons anger that it is being rushed through (pictured: Prime Minister Boris Johnson arrives at The Houses of Parliament on Friday) 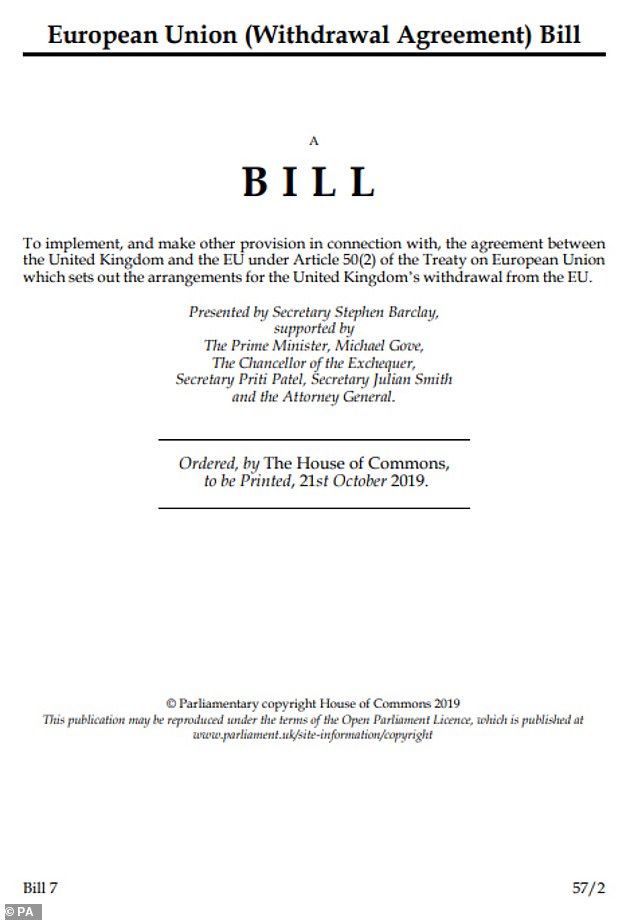 But Remainer MPs hope that if they drag their heels the EU will agree to delay the date for months.

A spokesman for the PM would not comment on whether he would pull the Bill if a customs union was added, although No10 suggested yesterday that the process will be at risk.

Tuesday: Potentially the most critical day for the Brexit deal. Debate on the WA legislation will begin in the Commons, with crucial second reading votes expected in the evening.

If the Bill is torpedoed at this point, the Brexit process will be back to square one.

The programme motion will also need to be approved, setting out the timetable for legislation being passed, if Mr Johnson is to have much chance of getting Brexit through for October 31.

Wednesday-Thursday: Assuming the second reading is successful, detailed scrutiny will be carried out in the Commons and the Lords.

There could be votes on amendments calling for customs union membership and a second referendum.

All being well, final approval should be given at third reading on Thursday night.

Friday-Sunday: The Bill moves to the Lords where another fight for surpremacy beckons between the government and Remainers.

October 28: The EU has suggested an emergency summit could be held on this date to consider a Brexit extension if the deal has not gone through Parliament.

Overnight Mr Johnson appealed to MPs to back his deal ‘so that we can leave without disruption and provide a framework for a new relationship based on free trade and friendly co-operation’.

The PM said: ‘I hope Parliament votes to take back control for itself and the British people and the country can start to focus on the cost of living, the NHS, and conserving our environment.

‘The public doesn’t want any more delays, neither do other European leaders and neither do I. Let’s get Brexit done on October 31 and move on.’

Government sources said there was a ‘good chance’ the deal would pass its first Commons hurdle today when MPs vote on whether they support it in principle.

But there is a growing revolt over Mr Johnson’s plans to push the deal through quickly to meet his ‘do or die’ pledge to leave by October 31.

Commons leader Jacob Rees-Mogg stunned MPs by announcing a 72-hour timetable for pushing the 110-page Withdrawal Agreement Bill, which will put the deal into law, through the Commons.

Along with the Government’s publication of the bill tonight, No. 10 released a promotional video on its Twitter page accompanied by dramatic music and a montage of images.

It said: ‘Our new deal with the EU means we can leave on October 31. Take back control of our laws, borders and money .. This new deal will allow us to move on and focus on the people’s priorities.’

But there are aspects of the Brexit deal which will raise eyebrows among staunch Leavers, including:

MPs will vote on the programme motion just after 7pm tonight. If ministers are defeated, the Government would lose control of the timetable, meaning there would be almost no chance of getting the law passed by October 31.

Former Tory chief whip Mark Harper said anyone voting against the timetable would be trying to wreck Brexit, adding: ‘They cannot hide in plain sight. They will be frustrating Brexit and this House’s ability to deliver on the EU referendum result.’

Brexit Secretary Stephen Barclay yesterday called on MPs to ‘respect the referendum’ by backing the Bill, warning them: ‘This is the chance to leave the EU with a deal on October 31.’

The DUP says it will vote against the deal in protest at proposals for requiring customs checks on goods travelling to Northern Ireland from the rest of the UK.

But the vast majority of the so-called Tory Spartans, who voted against Theresa May’s deal three times, have indicated they will back the plan.

And ministers believe up to a dozen Labour MPs from pro-Leave seats could now back it under pressure from their constituents.

However, they fear that the loss of the timetable motion could allow MPs to string out approval of the legislation for weeks, potentially forcing Mr Johnson to accept a Brexit extension from the EU he has vowed to resist. 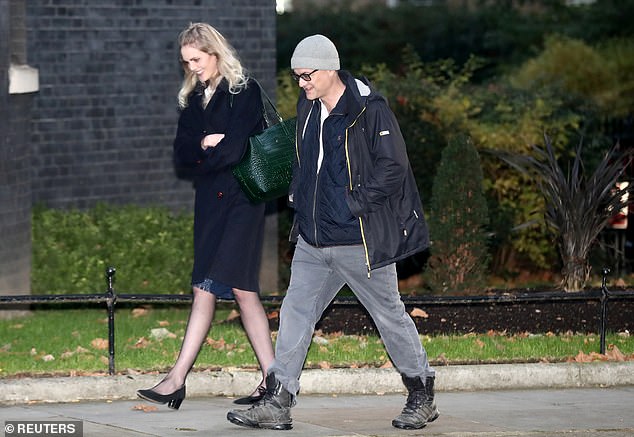 Under the provisions of the Constitutional Reform and Governance Act (CRAG), an international treaty – such as the Brexit deal – must be laid before Parliament for at least 21 sitting days before ratification to take place.

However in order for the Government’s timetable to be met, there is a provision in the WAB which ‘disapplies’ the relevant section of the CRAG.

After the Bill was introduced for a first reading in the Commons last night evening, shadow Brexit secretary Sir Keir Starmer accused the PM of ‘trying to bounce MPs into signing off a Bill that could cause huge damage to our country’.

Independent Group for Change MP Chris Leslie said the Government was ‘ramming through’ the Bill.

He said: ‘We know for example that Commons committee stage of the Treaty of Rome was not three days, or two days, it was 22 days.

‘For the Maastricht Treaty, 23 days in committee stage. The Treaty of Lisbon 11 days. Treaty of Amsterdam five days.

‘This is an unprecedentedly short period of time to dedicate to a massive and momentous piece of legislation.’

He added: ‘This motion that we are now debating, (is) the first in a series of attempts by the Government to stage what is essentially the ramming through of a piece of legislation, in I regard a disorderly way.’