On the eve of today’s dramatic Commons vote on his withdrawal plan, 50 per cent said MPs should back it.

The Survation poll for the Daily Mail showed 38 per cent were against the deal with 12 per cent undecided.

The survey found a surge in support for the Tories following the Prime Minister’s breakthrough at this week’s EU summit. They are now on 32 per cent, five points up on their tally three weeks ago. Optimism was mounting in No 10 last night that MPs will back the agreement. A source said: ‘It is incredibly close, but it is doable.’

However the situation became even more tense when Sir Oliver Letwin tabled a plan to force Mr Johnson to seek another delay to Brexit. The move by the Tory former Cabinet minister, which is set to be backed by Labour and other opposition parties, could deny the PM a clear-cut vote on his deal today.

On a day of high drama: 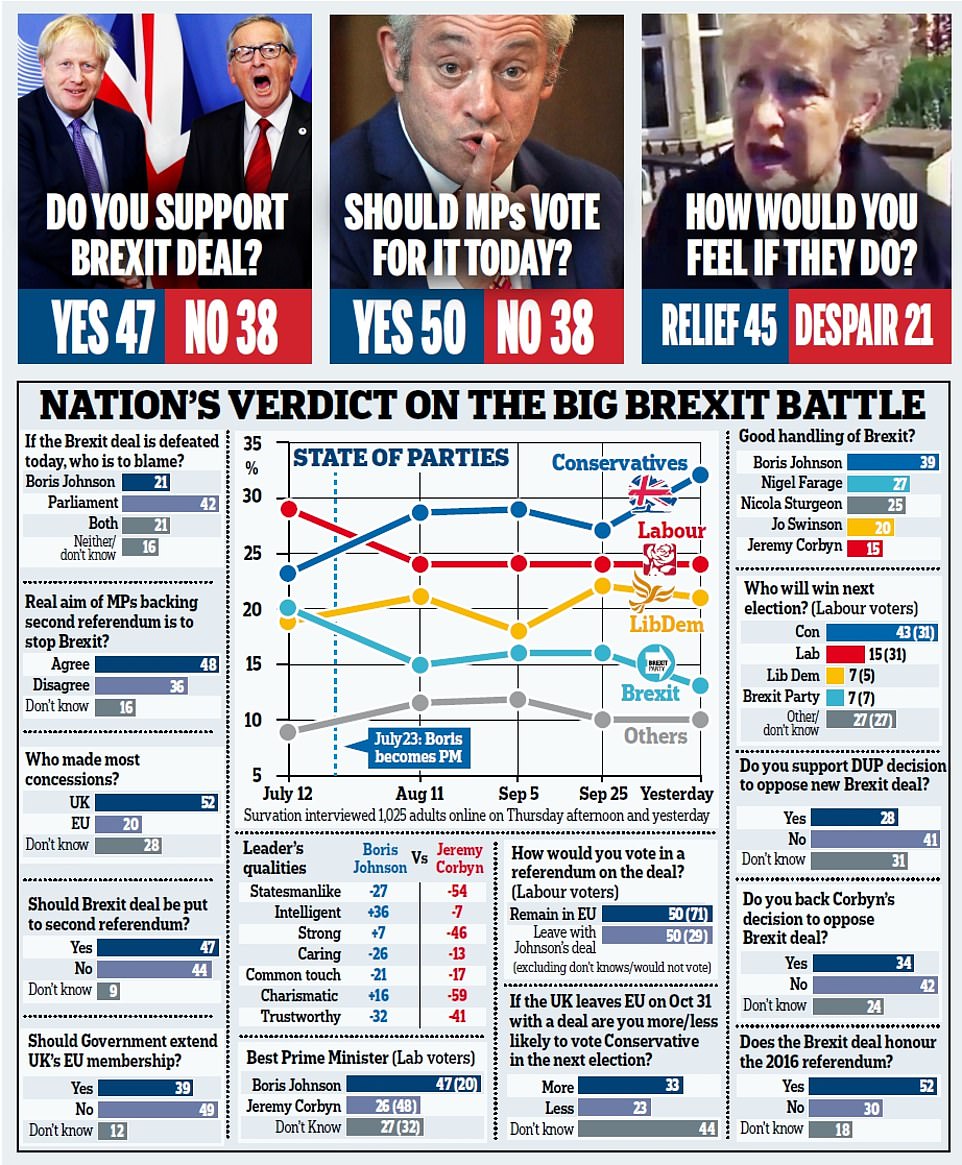 The survey found a surge in support for the Tories following the Prime Minister’s breakthrough at this week’s EU summit. They are now on 32 per cent, five points up on their tally three weeks ago. Optimism was mounting in No 10 last night that MPs will back the agreement. A source said: ‘It is incredibly close, but it is doable’

Today’s poll shows that a total of 47 per cent of people say they support the Prime Minister’s Brexit deal, while 38 per cent say they are against it.

Voters were also in no doubt as to who blinked first in the EU talks – with 52 per cent saying the UK gave most ground. Only 20 per cent think Brussels backed down. A total of 47 per cent believe Mr Johnson’s plan should go to a referendum, compared with 44 against the idea. 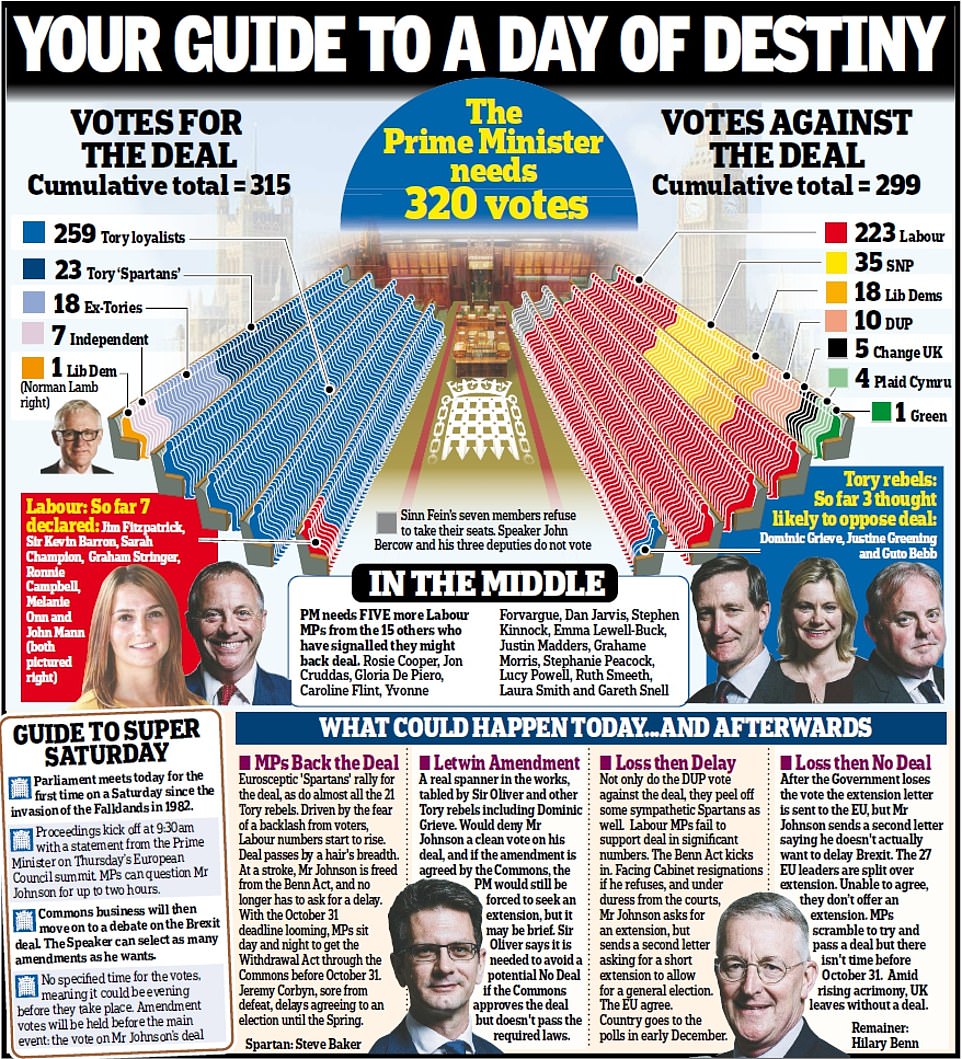 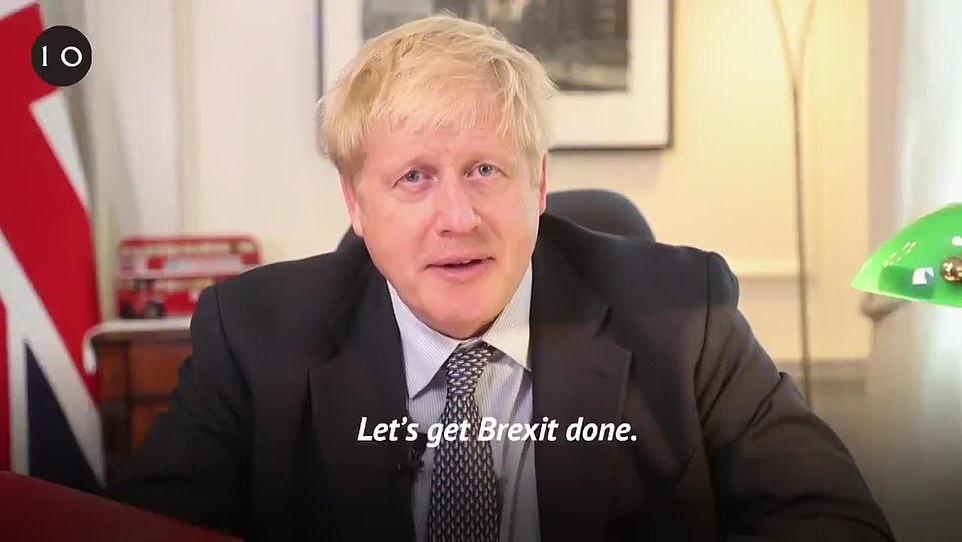 When voters are given a straight choice between the Prime Minister’s deal and remaining in the EU there is a dead heat, with both sides winning 50 per cent.

But a different picture emerges if, as argued by Brexiteers, voters are given a third option of leaving with No Deal. Remain gets most support, 45 per cent, based on first preferences – though no option gets over the 50 per cent winning line. The poll showed that most of the extra backing for the Tories was at the expense of Nigel Farage’s Brexit Party, whose support has fallen by 3 per cent.

The results of the survey heap more humiliation on beleaguered Mr Corbyn. One in five of his own Labour voters would rather see Mr Johnson in Downing Street. Millions of Labour supporters have written off his chances of ever seizing power.

Asked who they thought will win the next election, just 31 per cent of Labour voters think Mr Corbyn: exactly the same number, 31 per cent, say Mr Johnson will beat him. 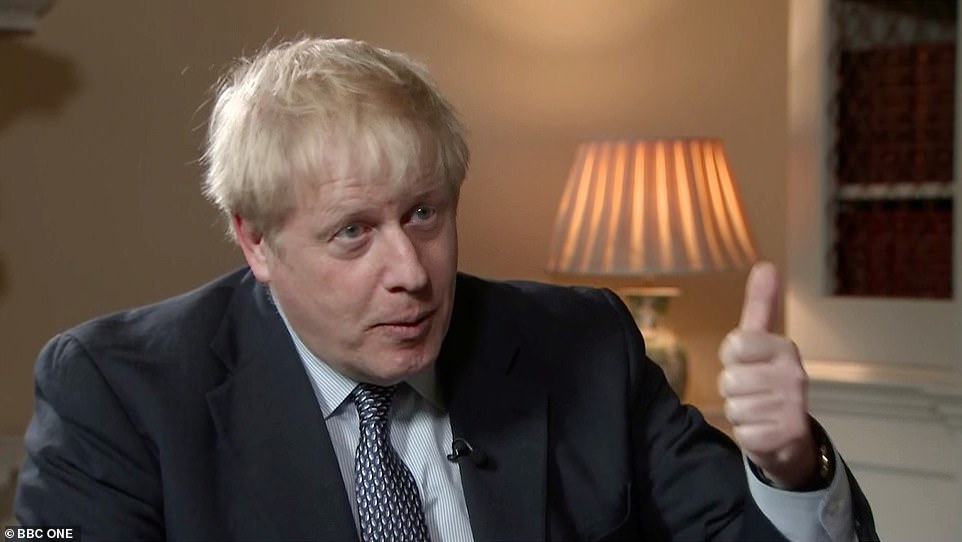 A total of 42 per cent say that they will hold Parliament responsible for the delay – twice the number, 21 per cent, who say Mr Johnson will have only himself to blame for the defeat

Moreover, if MPs throw out his proposal today, voters will not point the finger of blame at him.

A total of 42 per cent say that they will hold Parliament responsible for the delay – twice the number, 21 per cent, who say Mr Johnson will have only himself to blame for the defeat.

More than one in two (52 per cent) say the new deal ‘honours the 2016 referendum’ compared with fewer than one in three (30 per cent) who say it does not.

Asked who has the best Brexit policy, Mr Johnson is way ahead of all the main party leaders; Mr Corbyn trails in last behind Mr Farage in second place, followed by SNP leader Nicola Sturgeon and Lib Dem leader Jo Swinson.

The chasm between Mr Johnson and Mr Corbyn’s respective personal standing is illustrated by their ratings on ‘charisma’.

Here the Prime Minister scores plus 16 compared with Mr Corbyn’s minus 59.

For ‘intelligence’, Mr Johnson is plus 36 compared with the opposition leader’s minus seven.

A total of 41 per cent oppose the decision by Northern Ireland’s DUP to defy Mr Johnson today; seen as the main obstacle to him succeeding; 28 per cent say the DUP are right to oppose him.

Last night, Mr Johnson said that the showdown in the House of Commons was a ‘very big moment for our country’.

He said: ‘I think that getting it done would be a chance for us to come together as a country and move on and focus on things that really matter to people. I think the sigh of relief that would go up, not just around Britain, but around the world, would be very, very large and passionate.’

The Prime Minister also insisted his deal was the best divorce agreement possible.

Acuna nonetheless scorching, homers twice in Braves' 10-6 win
McCain Notebook: Tributes, memories, tears, civility...
The Latest: Djokovic closer to Federer showdown at US Open
Prince of Truffles: Philip wins battle to grow UK’s first ‘black diamonds’
McDonnell wades into row over Corbynista bid to oust Jewish Labour MP
Easter staycation boom with 7.5million Brits due to take to the roads
Trump's protocol lapse as he PATS Queen on the shoulder during State Banquet
DR MAX: Why sunshine can make you SAD... and I should know because I'm one of the sufferers