Producer Carmen Pavlovic said the musical, which has been playing to packed houses in New York, will open at the Piccadilly Theatre in 2021.

She and the show’s creative team, led by director Alex Timbers, transformed the Al Hirschfeld Theatre into Moulin’s Broadway home.

A model of the famous windmill (after which the cabaret venue is named) occupies one side of the auditorium; on the other is a wooden elephant like the one built for the real Moulin Rouge in Paris. 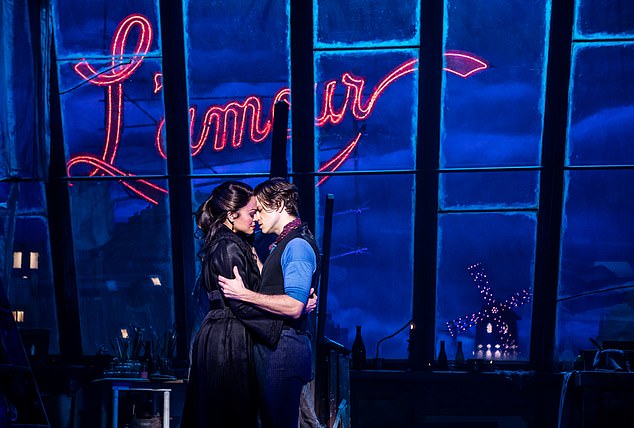 Moulin Rouge! features 70 rock standards — many more than the film. Timbers, Pavlovic and the show’s music supervisors spent months getting the necessary permissions. Performers are pictured above in Warsaw, Poland

‘I want people to walk in and think: ‘It’s not like the Piccadilly any more,’ Ms Pavlovic told me from her base in Sydney, where she’s chief exec of Global Creatures, key lead producer of the production, based on the Oscar-winning 2001 Baz Luhrmann film.

It starred Nicole Kidman as chanteuse Satine, caught up in a love triangle involving songwriter Christian and sadistic aristocrat The Duke.

Karen Olivo, Aaron Tveit and Tam Mutu, respectively, played those roles on Broadway. Ms Pavlovic said no casting decisions for London had been made yet.

Director Timbers told me the show will require someone with ‘power and intensity’ for the role of Satine. 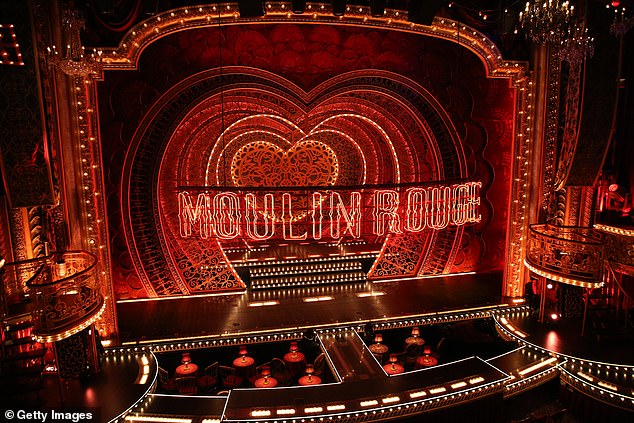 Producer Carmen Pavlovic said the musical, which has been playing to packed houses in New York, will open at the Piccadilly Theatre in 2021. The set is pictured above on Broadway

He also stressed that the production, written by John Logan with set design by Derek McLane and costumes by Catherine Zuber, is not about the Moulin Rouge that exists in the 18th Arrondissement.

‘This is the Moulin Rouge of your mind, so you want it to be as aspirational as possible.’ 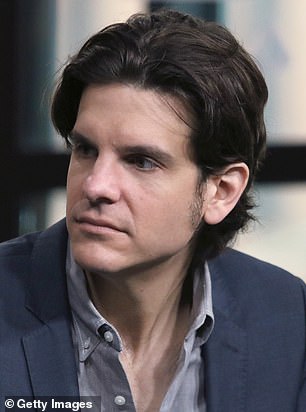 Moulin Rouge! features 70 rock standards — many more than the film. Timbers, Pavlovic and the show’s music supervisors spent months getting the necessary permissions.

‘There were 160-odd composers and 30 different publishers to negotiate with,’ Pavlovic said.

The Rolling Stones wouldn’t let Luhrmann use a song for his film, but Mick Jagger warmed to Timbers’ plan for Gimme Shelter.

He also persuaded David Byrne to let them use Talking Heads’ Burning Down The House.

‘It took a little bit of a journey to get there,’ said Timbers, who directed Here Lies Love at the National Theatre, which had a score by Byrne.

It took Pavlovic several years to sign up all the rights from Luhrmann, co-writer Craig Pearce, 20th Century Fox — and the famous Paris venue that owns the name.

Timbers told me that seeing Cats and Phantom Of The Opera when he was a kid inspired him to expand the show into the whole theatre.

When I saw Moulin Rouge! for the second time I spent ten minutes at the end looking around.

There were windmills, big and small. The sails on the large one went round and round, which excited me beyond comprehension, because I felt like a kid again.

Register at to receive updates about tickets, which will go on sale next year.

Ros will beguile as Yelena

Rosalind Eleazar has been chosen by director Ian Rickman and producer Sonia Friedman to play Yelena, the married woman who beguiles her admirers in Chekhov’s Uncle Vanya. Toby Jones takes the title role, with Richard Armitage as the doctor who sees Yelena as a goddess.

There has been a lot of buzz about the brilliant Ms Eleazar, left. She won plaudits for her performance in the BBC production of Howards End.

Likewise for her role in Kenneth Lonergan’s play The Starry Messenger at Wyndham’s Theatre (opposite Matthew Broderick) and for her Agnes, opposite Dev Patel, in director Armando Iannucci’s sublime film version of The Personal History Of David Copperfield.

Uncle Vanya, using a new adaptation by Conor McPherson, will start previews at the Harold Pinter Theatre on January 14.

Golden Globes SNUBS: This Is Us was completely SHUT OUT
Michael 'Wippa' Wipfli heads out to dinner with wife Lisa and their children in Bondi
Elizabeth Hurley, 54, shows off her age-defying physique
Masked Singer fans go wild over Jackie O's chic sequin mini dress
Myleene Klass shares sweet pregnancy throwback snap four months after welcoming son Apollo
Davina McCall, 52, shows off her washboard abs as she cheekily twerks for the camera
Britney Spears posts 'no makeup' selfies that make her look 'waaaay younger'
Mabel shows off her figure in pink Gucci jumpsuit as she enjoys girly night out