Turkish President Recep Tayyip Erdoğan threw a letter from which urged him not to ‘be a fool’ in the bin, new reports have revealed, dampening hopes that can persuade the politician to call off his offensive in .

Turkish officials told the that the letter was ‘thoroughly rejected’ by Erdoğan, who promptly placed it ‘in the bin’. 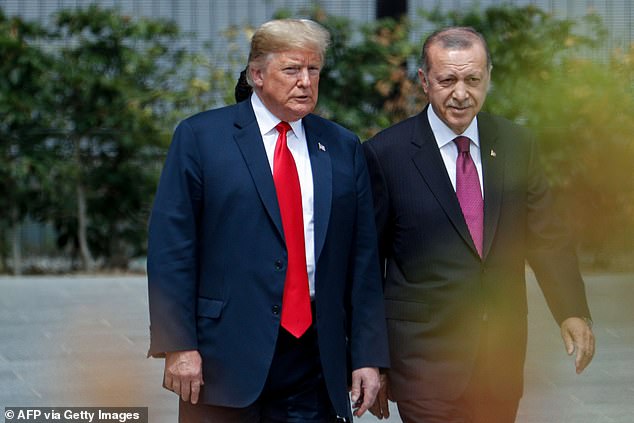 Mark Lowen, the BBC’s Turkey correspondent tweeted: ‘When President Erdogan received Trump’s letter, he “thoroughly rejected it, threw it in the bin” and launched the Syria operation the same day.

‘His mind was already made up to move in; letter was reportedly the final straw.’

The reports have thrown into question hopes that Pence will be able to convince Turkey to halt its offensive against Kurdish fighters in northeast Syria when he meets  with Erdoğan today.

Turkey’s week-long assault has created a new humanitarian crisis in Syria with 160,000 civilians taking flight, a security alert over thousands of Islamic State fighters abandoned in Kurdish jails, and a political maelstrom at home for Trump.

The president has been accused of abandoning Kurdish fighters, who were Washington’s main partners in the battle to dismantle Islamic State’s self-declared caliphate in Syria, by withdrawing troops from the border as Turkey launched its offensive on October 9. 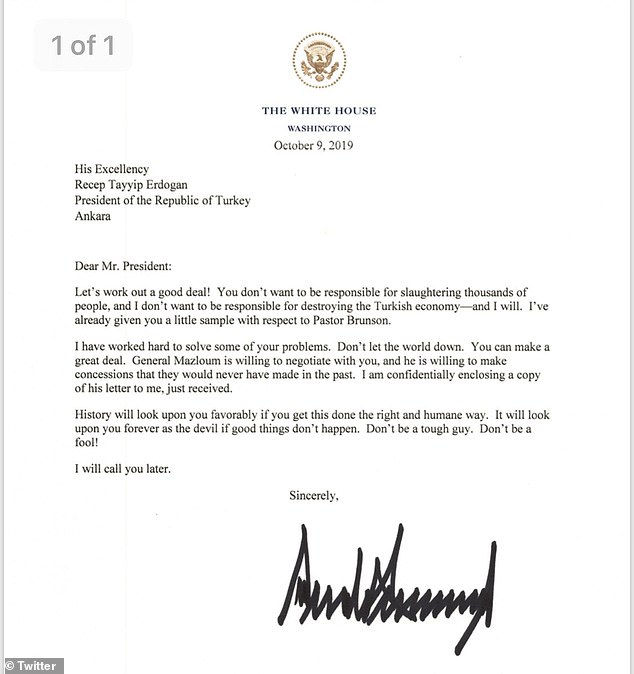 Turkish officials said the letter (pictured) was ‘thoroughly rejected’ by Erdoğan, who promptly placed it ‘in the bin’

Trump defended his move on Wednesday and called it ‘strategically brilliant’.

Following a phone call with Erdogan, who has rejected calls for ceasefire or mediation, Trump dispatched top aides including Pence and Secretary of State Mike Pompeo to Ankara for emergency talks to try to persuade Turkey to halt the offensive.

Pence was set to meet with Erdogan at around 11:30am on Thusday, while Pompeo and other officials are expected to hold talks with counterparts. A top aide to Erdogan, Ibrahim Kalin, met National Security Adviser Robert O’Brien on Wednesday and said he conveyed Turkey’s position.

Trump said on Wednesday that he hadn’t given Erdoğan ‘a green light’ to invade Syria. He also claimed releasing ‘a very powerful letter’ would dispel misconceptions about the impact of his troop withdrawal days before he wrote the note.

‘If anybody saw the letter, which can be released very easily if you’d like – I could certainly release it,’ he said.

‘But I wrote a letter right after that conversation – a very powerful letter. There was never given a green light.’

The letter was initially leaked to Trish Reagan, an evening anchor on the Fox Business Network, then confirmed by the White House as being genuine amid questions online over whether it was a parody.

It appears to support the president’s contention that he didn’t give Erdogan his approval for the Turkish military campaign.

‘General Mazloum is willing to negotiate with you, and he is willing to make concessions that they would never have made in the past,’ he wrote. ‘I am confidently enclosing a copy of his letter to me, just received.’

The U.S. has funded and trained Mazloum’s forces for at least five years. The SDF was America’s main proxy fighting the ISIS terror army in Syria.

The president has struggled to sidestep blame for the bloodshed that followed his decision to withdraw U.S. troops from northern Syria.

‘Maybe they’re going to fight it out,’ he said of Syria and Turkey, ‘but our men aren’t going to get killed over it.’