Former Today show anchor Ann Curry says she would ‘destroy’ disgraced NBC host Matt Lauer if she told all on her 15 years of working with him, as sources shed light into the ‘hellish’ marriage the anchor shared with his model wife Annette Roque.

Curry worked with Lauer on Today from 1997 to 2012 but hasn’t revealed all on the extent of the allegations he faces, spanning from sexual misconduct and harassment.

‘Ann has maintained a dignified silence, but a lot of people confided in her years ago and still do to this day,’ a source close to the TV icon said to . ‘She knows more than most about the man Matt really is, and when she finally speaks out, it will destroy him.’

Lauer, 61, was fired from NBC amid the shocking sexual misconduct allegations in 2017. 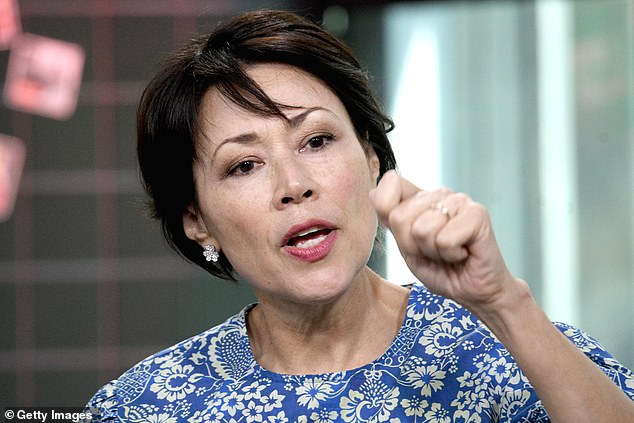 Former Today show anchor Ann Curry says if she revealed all she knew about allegations against Matt Lauer, it would ‘destroy’ him 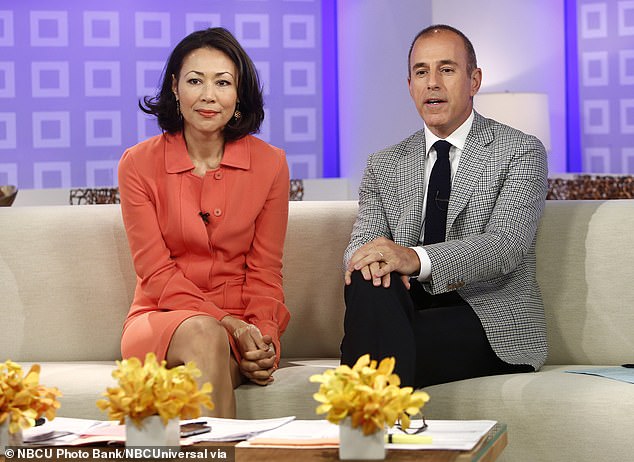 Curry worked with Lauer on Today from 1997 to 2012 but says hasn’t revealed all on the extent of the allegations he faces, spanning from sexual misconduct and harassment

Curry also backed Ronan Farrow’s bombshell book Catch and Kill, insisting that complaints about Lauer’s conduct with women were well-known but swept under the rug at the Peacock network.

She said she reported him to the high-up executives at the network after a colleague told her Lauer exposed himself to her. She didn’t reveal that accuser’s name but reported to officials Lauer was a problem.

However, NBC fired back against that claim, saying Curry didn’t disclose the ‘specific’ complaint.

‘By her own account, Curry relayed no specific complaint, nor did she say Lauer’s “problem” regarded any specific workplace misconduct,’ NBC News President Noah Oppenheim wrote in a memo to staffers.

In Farrow’s book he names for the first time Lauer accuser Brooke Nevils who accused him of raping her at the 2014 Sochi Winter Olympics. 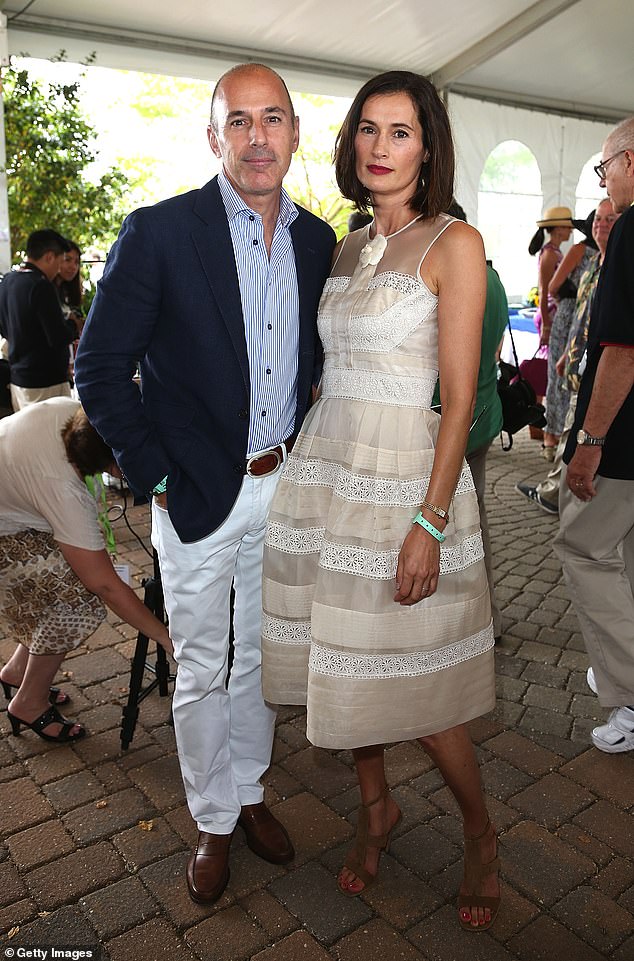 Sources also reveal that Annette Roque wanted to divorce Lauer before the sexual misconduct allegations surfaced and before he was axed from NBC in 2017. A source said Roque has ‘been through hell’ over the last five years of the marriage 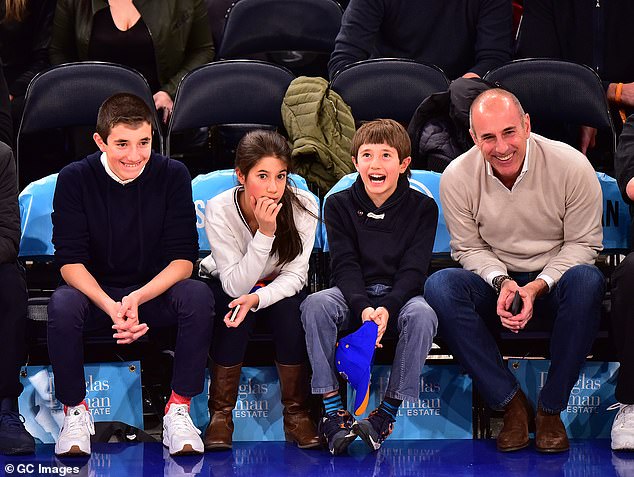 Despite ‘cracks’ early on in their marriage the couple stayed together for Lauer’s career and for the sake of their three children – Jack, 18, Romy, 16, and Thijs, 12. Lauer pictured with his children in January 2016

As Lauer’s career spiraled, his marriage only became rockier. Lauer and his wife of 20 years Annette Roque saw their marriage reportedly crumble with the release of the extramarital affairs allegations.

But sources reveal that even before the bombshell accusations came out, Roque, 52, had wanted to leave the marriage, but stayed for the sake of their wholesome public image.

‘Annette wanted out of the marriage for a long time,’ an insider told Wednesday.

‘She stayed for Matt’s career – and, more important, for their kids,’ the source said.

But Roque has ‘been through hell’ over the last five years of the marriage, especially after the NBC anchor was axed from the network.

‘Matt has always been a ladies’ man, and there were affairs int he beginning,’ the source said. 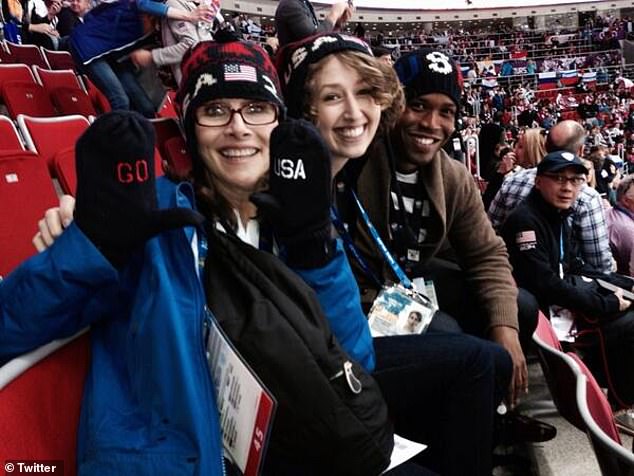 Just last week former NBC employee Brooke Nevils (pictured center) was identified as one of Matt Lauer’s accusers. She claims he raped her at the 2014 Sochi Winter Olympics

At one point Lauer vowed to change and Roque ‘chose to believe Matt’s denials’.

But eventually living with Lauer became unbearable saying the father-of-three was extremely tidy and controlling.

‘Matt’s a total control freak. Nothing was ever out of place, and he expected this same quality in his wife too,’ the source said.

Roque filed for divorce in July and the papers were signed by a Suffolk County Supreme Court Judge last month.

Roque has been notably silent as her husband became embroiled in the misconduct scandal, but she broke her silence last week when Nevils came forward with the rape allegation.

‘In response to your inquiry, our client has asked us to tell you that now that the parties are officially divorced, her priority and only concern is for their wonderful children. Our client will make no further statements,’ Roque’s lawyer John M. Teitler said to  magazine when asked about that allegation.

After Nevils rape allegation was publicized, Lauer, who has been laying low over the past year, came forward to deny the accusation as ‘categorically false’.

‘The story Brooke tells is filled with false details intended only to create the impression this was an abusive encounter. Nothing could be further from the truth,’ he said.

Bulldozers demolish Casamonica Mafia clan's illegal villas in Rome
VIDEO: Walmart shopper gargles mouthwash, spits it back into the bottle then RETURNS it to the shelf
Princess Elisabeth of Belgium celebrates her 18th birthday at the Royal Palace in Brussels
Mark Meadows says he will NOT run for reelection in the House a day after Democrats impeached Trump
Prince Harry and Meghan Markle's new life will be funded from their £34million private fortune
No city will be spared: Dr. Birx DEFENDS Trump's threat to quarantine New York despite Cuomo remarks
Shocking moment NYPD lieutenant saves homeless man from jumping in front of a moving subway car
Pregnant 2,000-pound great white shark swims some 700 miles into the Atlantic to avoid males