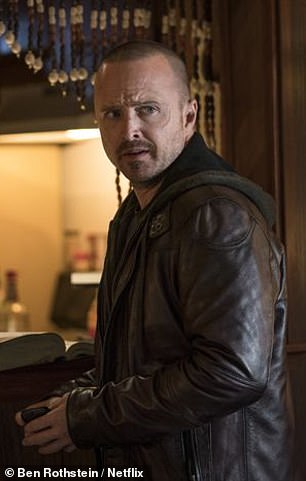 Besides, El Camino (Spanish for ‘the road’) is paved with flashbacks, even though most of them are newly minted, created especially for this film. Aaron Paul is pictured above as Jesse Pinkman

The greatest TV drama ever made, say the millions of fans of Breaking Bad, immune to the claims even of The Sopranos, The Wire and Mad Men, let alone those of Poldark, and Heartbeat.

That’s why there was so much rejoicing when Vince Gilligan, creator of the show, which ran for 62 episodes between 2008 and 2013, announced he was writing and directing a sequel, budgeted at $6million, as a one-off movie for .

But this time the anticipation was laced with anxiety. Breaking Bad ended superbly six years ago, bringing to a pitch-perfect conclusion the story of Walter White (Bryan Cranston), a mild-mannered, cash-strapped science teacher from Albuquerque, New Mexico.

Aware that he was dying of cancer and determined to provide for his family, Walt used his knowledge of chemistry to ‘cook’ crystallised methamphetamine in industrial quantities, in the process becoming a drugs baron rich and powerful enough to take on the Mexican cartels.

His protégé, friend and eventual foe was a former pupil, Jesse Pinkman (Aaron Paul), who unlike Walt managed to retain a few shreds of human decency and was rewarded by Gilligan with his life. Walt died, but in one final, redemptive act, set Jesse free.

That perfect ending is the point at which El Camino begins. Jesse had been captured by a criminal gang, and caged like a wild animal, until Walt masterminded their slaughter.

So now Jesse is on the run, needing money to fund a new identity, the instinct to stay alive and ahead of the law just about overcoming the travails of post-traumatic stress disorder.

It sounds grim. It is grim. Breaking Bad didn’t become the most critically-acclaimed series in history (according to the Guinness Book of Records) by pulling its punches. For some, the violence was too much, the moral abyss too wide and too deep.

But the horror has always been leavened by humour, and so it is in El Camino, particularly in the form of Jesse’s dim-witted associates Badger (Matt L Jones) and Skinny Pete (Charles Baker), to whom initially he turns for help.

Some of their banter would be worth the price of admission, if only you weren’t watching this at home.

Gilligan doesn’t even try to make this film, which is available to view now, a stand-alone. If you have no idea of the rollercoaster journey Jesse has already been on, there’s no value in following him now. 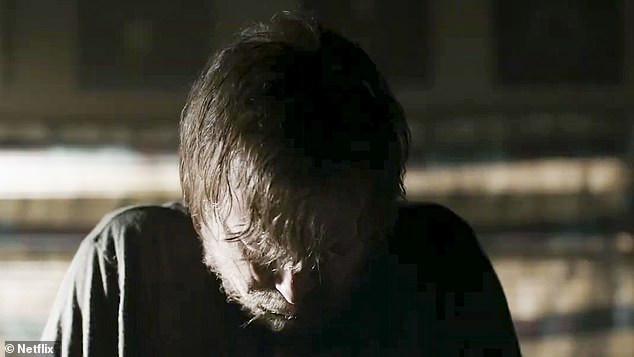 The greatest TV drama ever made, say the millions of fans of Breaking Bad, immune to the claims even of The Sopranos, The Wire and Mad Men, let alone those of Poldark, Downton Abbey and Heartbeat

Besides, El Camino (Spanish for ‘the road’) is paved with flashbacks, even though most of them are newly minted, created especially for this film. This is both a strength and weakness.

It’s a pleasure to see Walt again, fleetingly. But the Breaking Bad faithful will wince over an extended scene between Jesse and his old adversary Todd (Jesse Plemons), which is meant to have happened six years ago, but surely can’t have done because Plemons was pretty slim then and has since ballooned.

It’s a shame to find such a lapse of continuity when so much about El Camino – the dialogue, the performances (especially Paul’s), the cinematography, the wonderfully weird New Mexico landscape – are so in tune with all that came before.

But never mind. There are some cracking scenes, including one in which Gilligan indulges those of us who always felt that Breaking Bad was really a form of TV Western – a drug-fuelled modern version of Bonanza. Or High Chaparral, perhaps, with the emphasis on high.

So on the whole, fans will love this tale of what Jesse did next, even as they ponder the $6million question, might it have been better to have quit while he was behind?