Kevin Hart fled the scene of his horror car smash last month while his two friends remained trapped in the vehicle, according to the crash report.

New details have emerged following the accident, with law enforcement sources telling on Thursday that ‘none of the 3 people in the car were wearing seat belts’.

Hart, 40, had to have his spine fused back together after breaking it in three places when his 1970 Plymouth Barracuda barreled through a fence on Mulholland Highway in Malibu in September.

Now it has been revealed driver Jared Black was using a handsfree device for his phone during the accident and that his ‘sudden acceleration and loss of control’ caused the crash. 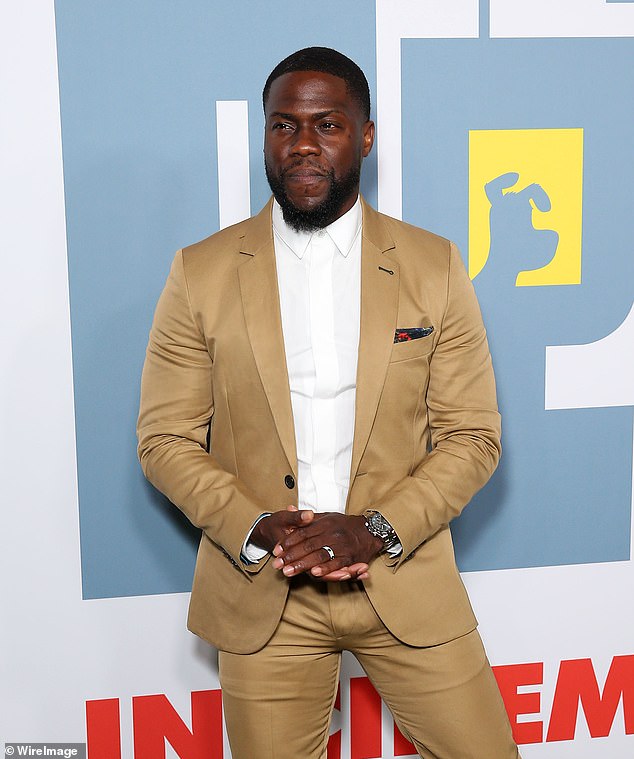 Not at fault: Kevin Hart’s horror smash was not the fault of the vehicle – or even Hart himself, according to the California Highway Patrol’s investigation. Hart seen here in June 2019 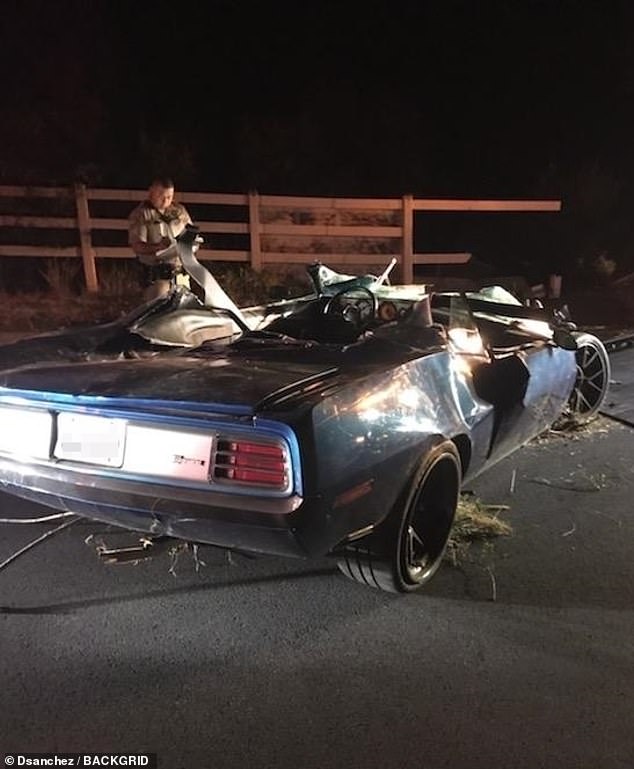 Ouch: Law enforcement sources told TMZ on Thursday that the Jumanji: Welcome to the Jungle funnyman’s 1970 Plymouth Barracuda was being driven by pal Jared Black and that ‘sudden acceleration and loss of control’ caused the accident last month

The determination came after law enforcement reportedly stripped down Hart’s vintage car and found it ‘did not have any mechanical issues’ and that the crash was caused by ‘driver error’.

But they did find extensive bodywork including adding sports tires and a 6.4L Hemi V-8 engine. The car was reportedly without an anti-lock braking system.

The report states: ‘There were fold and crease marks on the belt surfaces consistent with being folded and tucked into the seats and no indicators of occupant loading were present.’

If they had been worn, police add: ‘They were being worn improperly due to excessive slack in the belts.’

Also in the vehicle was the 40-year-old’s trainer Rebecca Broxterman. She is said to have been found facing the windshield between the right passenger seat and the roof. The report states the car was ‘not outfitted to carry rear seat passengers’.

Hart, who had plastic storage boxes to replace the backseats, told TMZ: ‘I have nothing but love for Jared and wish him and Rebecca a speedy recovery.’

However the site also said their sources have stated there will be ‘multiple lawsuit[s] stemming from the crash’.

Meanwhile, the comedian is reportedly back in action promoting his upcoming action sequel Jumanji: The Next Level, according to .

The stand-up talent showed up for several hours worth of video shoots on set on Monday, in addition to another two-hour shoot on Tuesday and one more slated for Thursday.

While Hart is still not back to full health after the accident, the comedian is still committed to fulfilling his obligations. 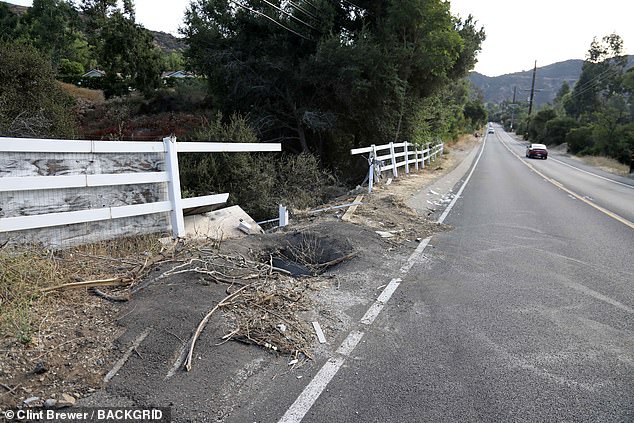 Catastrophe: ‘None of the 3 people in the car were wearing seat belts’ when the vehicle barreled through a fence on Mulholland Highway in Malibu, say TMZ 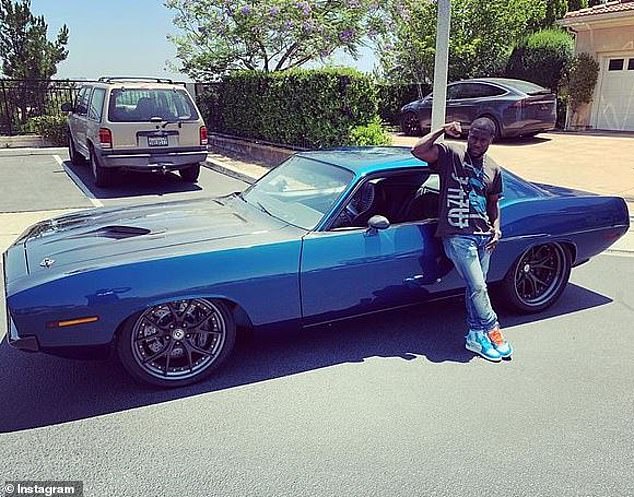 Happier times: Hart seen here with the car – which police deemed to be mechanically sound

Hart returned home from his inpatient rehab facility on September 20, following the horrific crash that took place over the Labor Day holiday weekend.

The actor suffered three spinal fractures from the accident, two in the thoracic section of the spine and one in the lumbar.

He spent 10 days in the hospital and was then transferred to the inpatient facility before returning home. 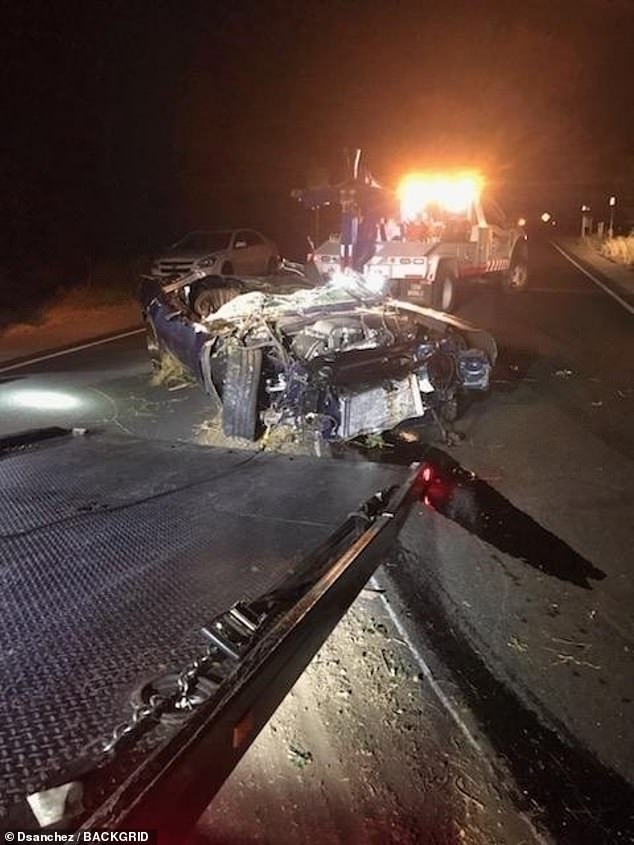 Hart has been easing himself back to health, and doctors have assured him that he’ll eventually be back to where he was before the accident.

Since he doesn’t have anything on his plate, as far as filming new projects, he’s been taking the time needed to get back to full health.

While Hart is normally in the gym working out constantly, he has pared back his regimen to exclusively to exercises approved by his physical therapist.

DailyMail.com has contacted a representative of Kevin for comment.

French President Emmanuel Macron is ‘too arrogant, too snappy’ – says his WIFE Brigitte
Villagers FIREBOMB elephant and calf to stop the animals wandering onto their crops in India
Eat to beat illness! DR RUPY AUJLA reveals his top recipes for using food as medicine
Assassin walks into attorney's office in Mexico and shoots him dead in front of his son
Appy meal: The restaurant where you order and pay with your phone - and never even talk to a waiter
Bernie Sanders wins the Democratic debate, pundits declare while Elizabeth Warren is a loser
Donald Trump says he will 'look at' pardoning Tiger King's Joe Exotic
I've got it, it's a b****r this thing: Boris Johnson's verdict on battling coronavirus