Extinction Rebellion protesters tried to shut down and gag the BBC today after it broadcast an interview with a former police officer who has called for the group to be treated more seriously.

On the fifth day of eco-mayhem in central London, a group of demonstrators prevented journalists from entering the corporation’s New Broadcasting House at the top of Regent Street.

They are angry that the BBC’s Today programme interviewed former Scotland Yard Commander Richard Walton, who previously wrote a report saying the group should be treated as ‘anarchist extremists’ by police.

So far this week, more than 1,100 activists have been arrested after protests in Trafalgar Square and Whitehall, outside Government departments and at City Airport. 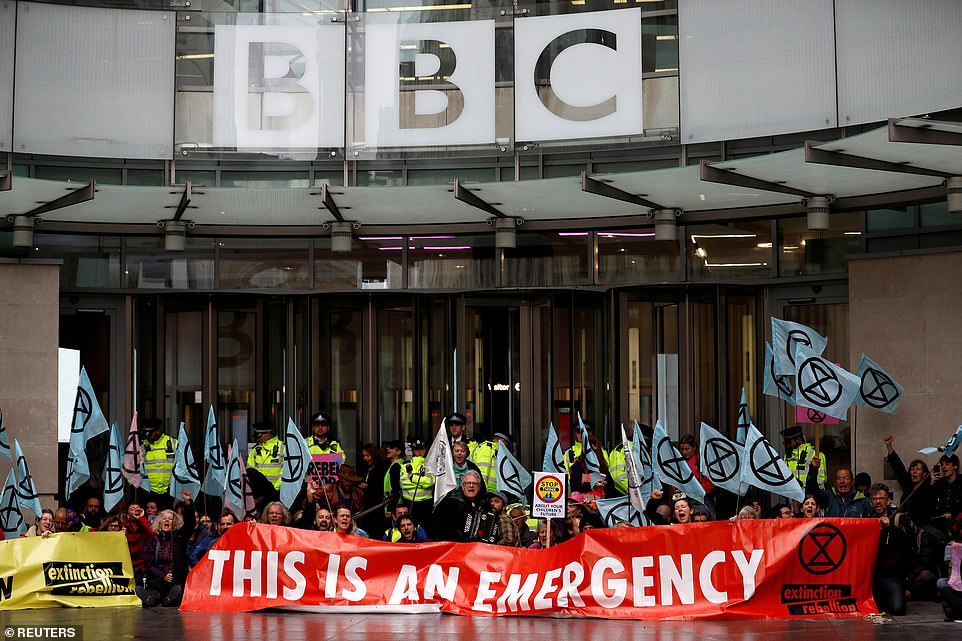 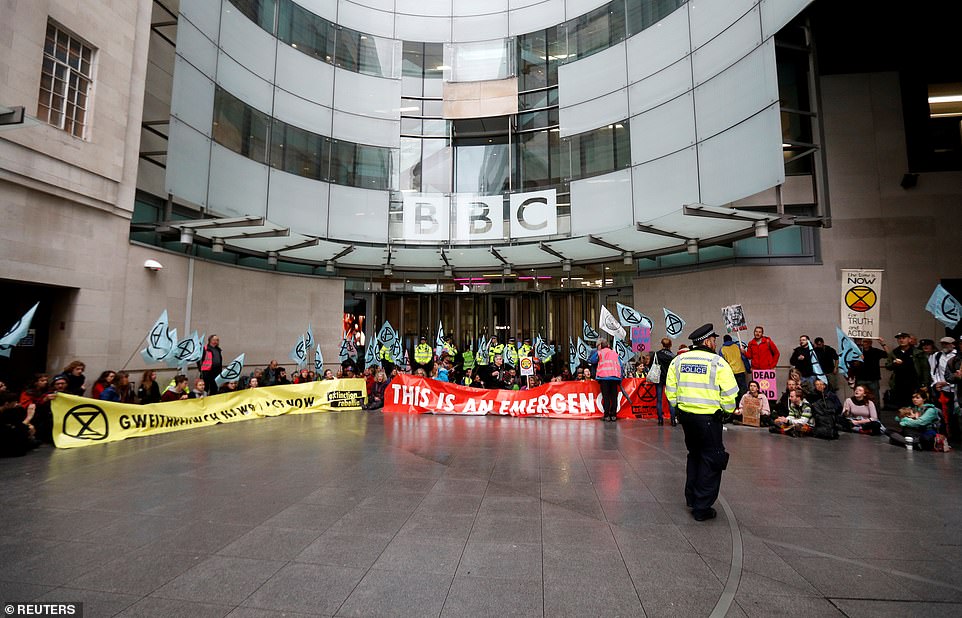 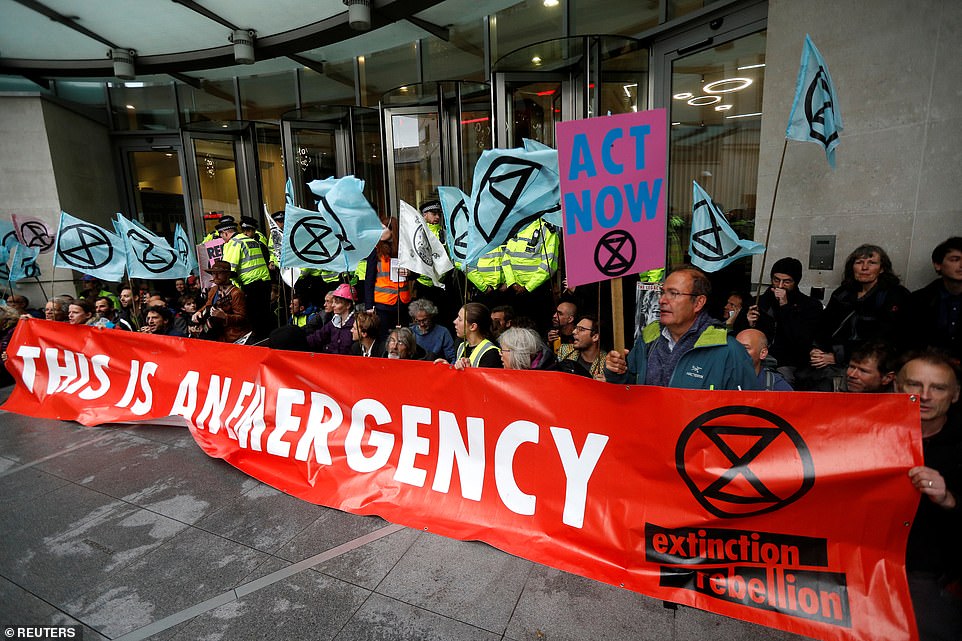 A group spokesman said: ‘We were disheartened this week to see the BBC’s flagship radio programme Today has once again platformed the… former Metropolitan Police Commander Richard Walton on the first day of our International Rebellion.

‘This is the very same man that authored the propaganda report on Extinction Rebellion by the opaquely-funded free-market think tank, Policy Exchange, which we now know to be receiving money from some of the UK’s leading energy firms.

‘The report sought to portray our deeply non-violent and non-ideological movement as “extremist”, in order to justify the introduction of harsher laws on peaceful protest.’

Financial journalist Paul Lewis tweeted that he was among those ‘locked out’ out of the building.

It comes after activists tried to shut down London City Airport yesterday, with one protester managing to evade security and glue himself on top of a BA plane.

As two flights were grounded and 50 protesters arrested, Scotland Yard’s top officer warned that the climate change campaigners are taking officers away from tackling crime across the country.

Dame Cressida Dick urged Extinction Rebellion to ‘protest lawfully or go home’ after a day of chaos at the airport, which also saw campaigners gluing themselves to the terminal floor, clambering on to roofs and blocking traffic.

The BA plane was delayed after a protester clambered up the fuselage to glue himself on top for an hour.

Concerns were raised over how partially blind Paralympian James Brown, 43, managed the feat, which came after he was arrested for an alleged drone plot at Heathrow Airport just a month ago.

Dame Cressida, the Metropolitan Police Commissioner, branded the stunt ‘reckless, stupid and dangerous’ as she admitted the protests had taken their toll on her force. 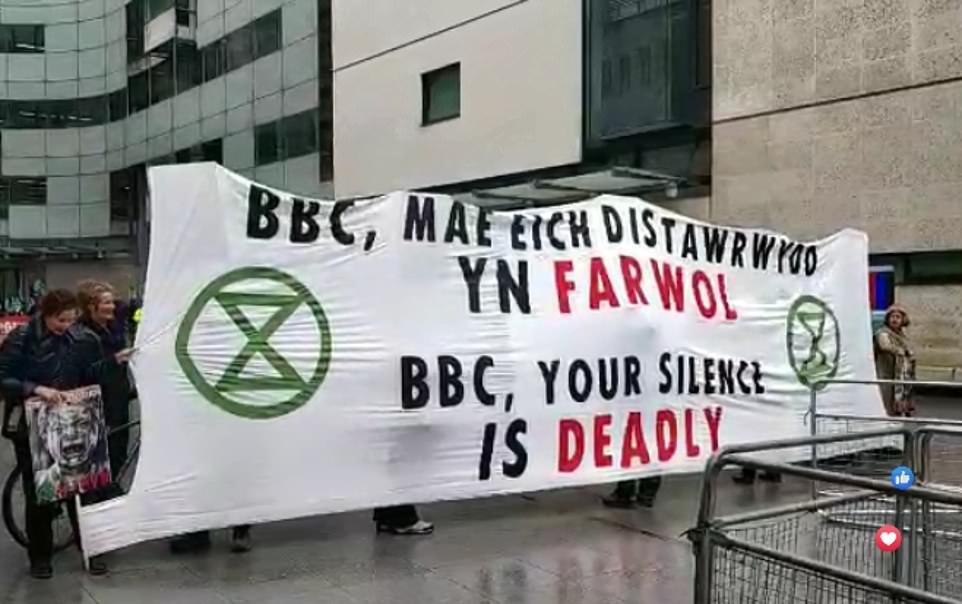 With more than 1,000 arrests so far, hundreds of officers have been drafted in from every police force around the country to help deal with the planned two-week protests in London.

She said: ‘We are taking people away from keeping people safe in local areas and putting them into central London.’ Although Extinction Rebellion did not fulfil its ambition of closing London City Airport entirely, its activists caused chaos both inside and outside the terminal throughout the day.

Several smartly dressed protesters managed to get inside and glue themselves to the floor, while others blocked the entrance by lying on the pavement outside the main doors. Despite the heavy security presence, with the number of officers almost equalling the number of protesters, two men were also able to clamber on top of the roof at the entrance.

Mr Brown, who won bronze for Ireland at the London 2012 Paralympics but was later banned from athletics for doping, could face a lengthy spell in prison after the stunt on top of the BA flight bound for Amsterdam.

Once in place he broadcast a five-minute Facebook Live video about climate change, adding that he was ‘scared of heights’ and felt ‘shaky’. 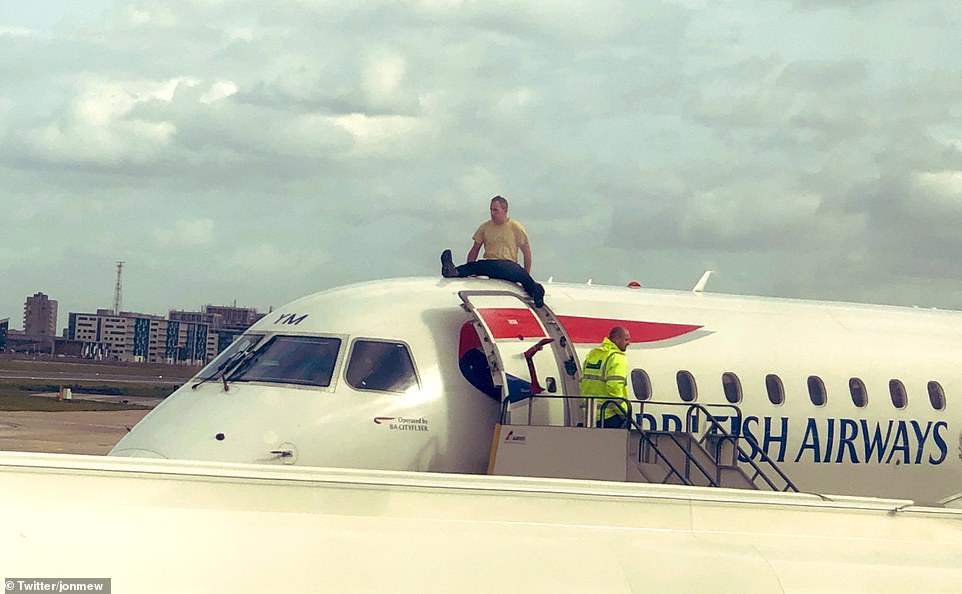 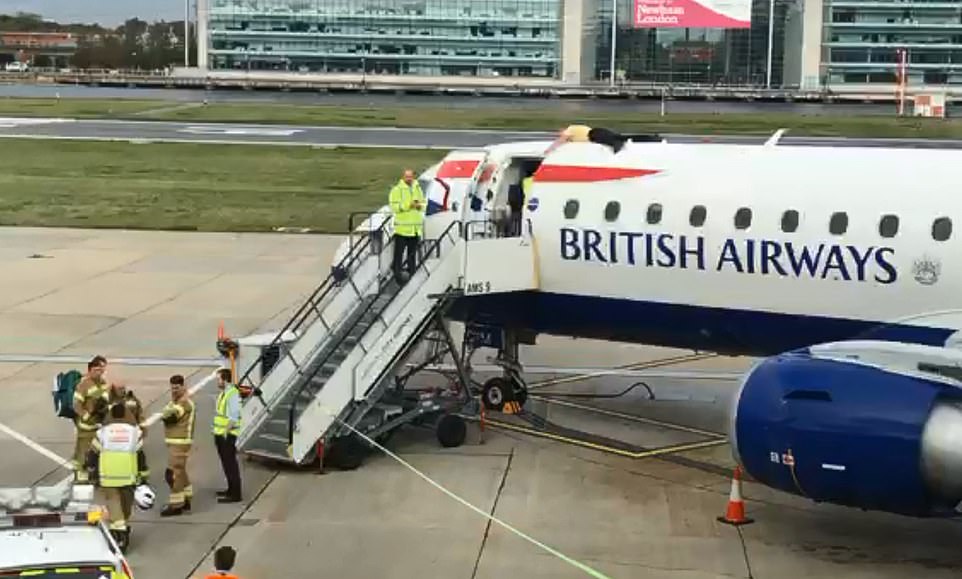 The Paralympian took part in the stunt today, one month after being arrested for allegedly flying a drone over Heathrow

As security guards approached, the stunt turned to farce as he told viewers: ‘I don’t know how they’re going to get me down, but I hope it’s soon… it’s scary up here, and a bit cold.’

Hours earlier, a protester delayed an Aer Lingus flight to Dublin. During the pre-flight safety demonstration, the smartly dressed middle-aged man got up and began roaming the cabin and lecturing passen-gers on climate change.

Deputy Assistant Commissioner Laurence Taylor, of the Metropolitan Police, said: ‘Targeting an airport and travellers in this way is wholly unacceptable and irresponsible.’

Addressing the Extinction Rebellion activists, Dame Cressida said yesterday: ‘Protest lawfully or go home. You have caused disruption to many people and caused misery to some people’s lives. We have cleared you away again and again, and now secured the sites you wanted to occupy. You have a place to protest. Go and protest there.’ 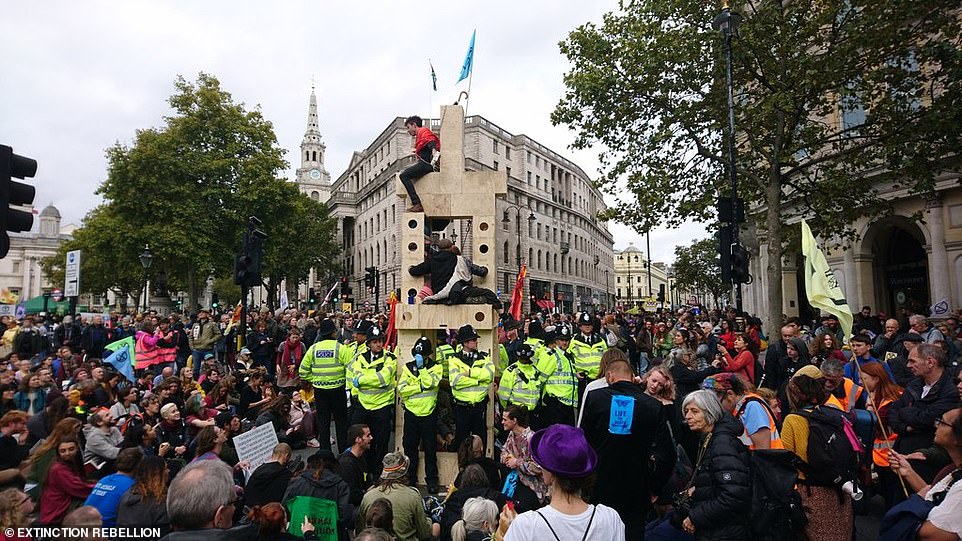 Extinction Rebellion at Trafalgar Square yesterday, where police stood around a group who climbed a structure 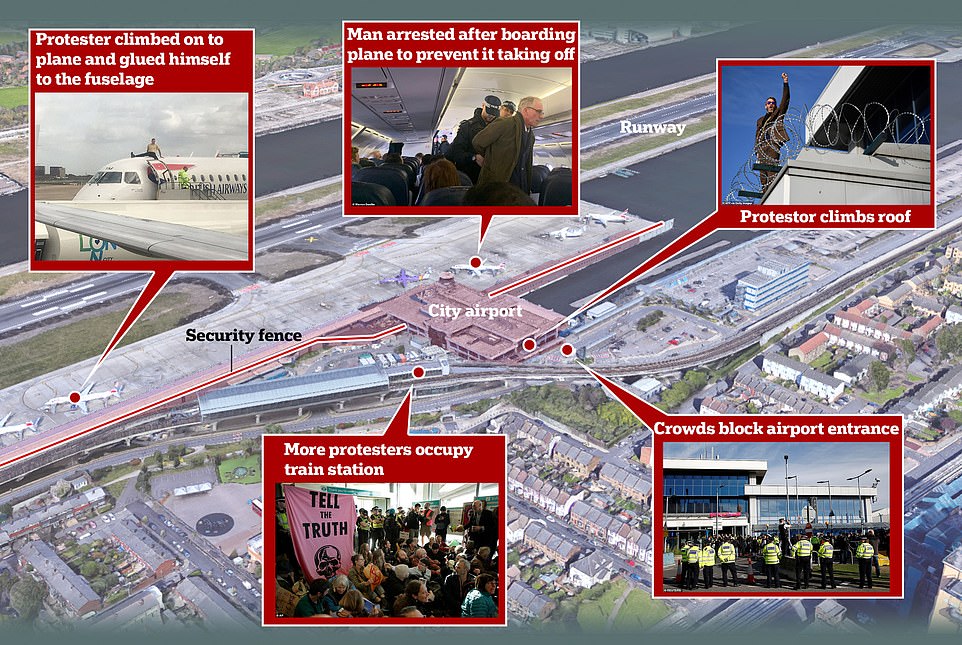 Who has been charged in relation to the protests?

There have been 842 arrests in connection with the ongoing Extinction Rebellion protests across London.

Some 29 individuals have been charged with various offences including ‘knowingly failing to comply with a condition imposed under Section 14 of the Public Order Act 1986’, and obstructing a highway.

The majority of the following individuals will be appearing at Westminster Magistrates’ Court between November 5 and November 7:

Five individuals have been charged but have refused to provide police with their name. Those arrested but not charged have been released under investigation.

Meanwhile in central London, tents had been cleared away from roads leading into Parliament Square as the police appeared to have contained the protests in Trafalgar Square.

However, Scotland Yard faced embarrassment after activists set up a ‘mini Glastonbury’ under their noses in one of London’s royal parks.

More than 300 tents were illegally pitched in St James’s Park, with a space for artistic performances.

Police have been put under further pressure as activists who had been arrested earlier in the week returned to the protests after being released.

Yesterday, veteran campaigner Phil Kingston, 83, was arrested for the third time. The retired probation officer from Bristol was arrested last Thursday for spraying fake blood on the walls of the Treasury, on Monday for spray-painting a slogan on the same building and yesterday at London City Airport.

Jeremy Corbyn yesterday praised Extinction Rebellion for ‘educating us’ and claimed its activists were so virtuous they may one day appear on stamps.

The Labour leader suggested that the protest group, which has brought parts of London to a standstill, could be commemorated in future years like the oncevilified suffragettes.

Speaking at a rally in Northampton, Mr Corbyn said: ‘To have any hope of keeping global temperature rises to a manageable level, we need immediate and radical action. I’d like to thank groups like Extinction Rebellion for educating us and pushing the issue to the top of the agenda.’

Mr Corbyn pointed out that antiestablishment groups had in the past become celebrated as times changed. He said: ‘Every time anyone condemns people for protesting they should think for a moment where protest can lead.

‘Those women who stood up for the right to vote, the suffragettes, were condemned mercilessly by almost every newspaper in the country – they’re now on postage stamps. So let’s just remember the right to free speech, the right to protest, the right to be heard in a peaceful way, is a precious right.’ The suffragette movement featured on Royal Mail stamps last year to commemorate 100 years since women were given the vote.