President Erdogan lost no time in seizing the opportunity that President handed him this week.

In a bid to ‘bring peace to the area,’ the Turkish president initiated a long-awaited onslaught on ‘s Kurds using FI6 supersonic aircraft, tanks and heavy artillery, as the embattled Kurds shot back with mortars against Nato’s second largest army.

This David vs. Goliath battle is the latest round in decades of conflict between the Turks and Kurds. 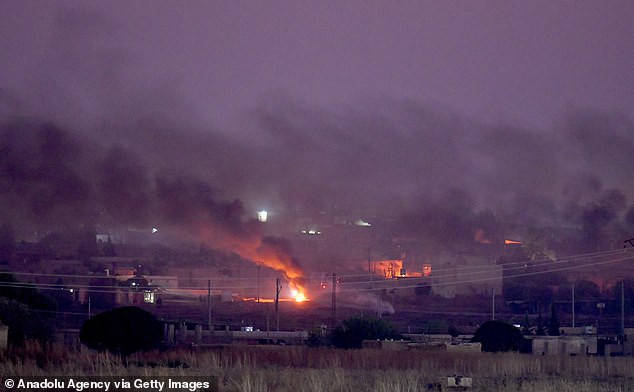 In a bid to ‘bring peace to the area,’ the Turkish president initiated a long-awaited onslaught on Syria’s Kurds using FI6 supersonic aircraft, tanks and heavy artillery. Pictured: Flames burned in Ras al Ayn on the Syrian border

Turkey views the 30million or so Kurds living inside its borders and in neighbouring Syria and Iraq as a potential threat to its unity.

Now he wants to suffocate their stronghold in northern Syria, too.

The West value the Kurds as active allies in the fight against Islamic terrorism, brave warriors who were crucial in the bloody battles to liberate Syrian towns and cities taken by IS.

Today, Kurdish fighters are key to guarding up to 100,000 IS fighters (and wives and children) held in prison camps in the region.

But to Erdogan it is the Kurds who are the terrorists who must be vanquished.

He had to bide his time until he got the go-ahead from Washington to unleash his troops in areas where American troops were already operating – and now, that time has come.

President Trump likes to shock, but even by his standards, his decision on Sunday to announce the withdrawal of the US military from Syria – without consulting friends or warning foes – was a geopolitical earthquake. 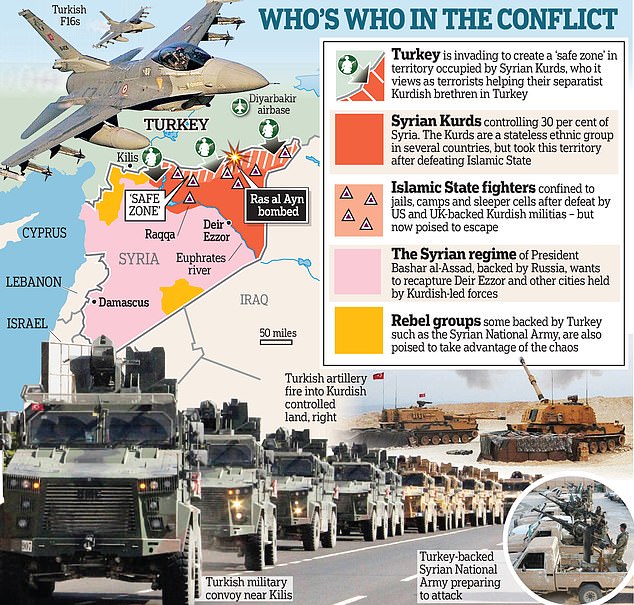 Who’s who in the conflict? Turkey views the 30million or so Kurds living inside its borders and in neighbouring Syria and Iraq as a potential threat to its unity

He was, in effect, telling Erdogan ‘go get ’em’, while hoping that bringing US troops home will shore up his vote in the 2020 election.

The Syrian civil war is complex, and here we have another front opening up: A Turkish-Kurdish conflict that will fan the flames of a long-running, bitter inter-ethnic rivalry.

America’s allies, including Britain, are horrified by Trump’s cynical betrayal of the Kurds, not to mention US military and foreign policy advisers and Republican Trump supporters.

Russia, a powerful ally of the Syrian government, also want the Americans out of Syria. But even its foreign minister, Sergey Lavrov, is aghast by Trump’s ‘frivolous’ approach to the region.

Indeed, so many countries and terrorist groups have a stake in Syria, that Trump’s decision to allow Turkey to throw oil on the simmering flames there risks setting off wild fires which no one can control.

As well as the Russian troops, there are Iranian soldiers in Syria, too. The Russian air force patrols the Syrian skies where Turkish bombers are operating.

Back in 2015, the Turks shot down a Russian fighter over the Syrian-Turkish border. That single act almost caused a war.

A similar incident could light the fuse for a wider conflict between NATO ally Turkey and Russia, or even between NATO allies if Turkey bombs locations in northern Syria where British and French special forces operate on the ground.

Apart from giving the Kurds a bloody nose, Turkey wants to push millions of Syrian refugees back into a so-called ‘safe zone’ it is creating by force in northern Syria.

None of the refugees came from this place and they see it as hostile territory.

Meanwhile, the Kurds who live there fear being swamped by them. It is a recipe for a horrible tribal war.

Many Syrian refugees will prefer to risk crossing the sea to Greece than being pushed into a war-zone.

If so, then we will see a rerun of the refugee crisis in 2015 which convulsed the EU, which urged member states to take in hundreds of thousands of displaced Syrians.

And the Turkish government is capitalising on that, threatening to open the floodgates to the West if European states criticise it.

Either way, a tsunami of human misery is likely to be leaving Turkey soon.

That will be bad enough. But if Kurdish fighters leave their guard posts to fight the Turks, there is nothing to stop IS terrorists fleeing the prison camps to regroup – or head to Europe.

And then there are warlords and cynics who profit from bloodshed. These vultures will see Trump’s casual nod to Turkey as an opportunity to pursue their wicked ends.

The US President may change his mind – but it is too late to rein in the hounds of war.

Mark Almond is the Director of the Crisis Research Institute, Oxford.

Kendall Jenner joins Bella and Gigi Hadid at bonkers Moschino MFW show
Woman, 50, is arrested over strawberry needle contamination after a ‘complex investigation’
Trump says he's sit down with China's Xi in the near future to discuss trade deal
No-deal Brexit will caused smaller 'economic shock' than feared thanks to ministers' plans
Dramatic first interview with criminal investigated over Jill Dando's murder
`I don't want to put baby on floor' says mother who booked a premium BA flight seat
Thousands in Scotland to be left without gas for days due to a mass mains failure
Koala flags down cyclist and sips water from bottle as temperatures soar to nearly 40C in Adelaide