A man with a life-long dream of building a lighthouse has revealed he’s been left in debt of almost £4 million and sacrificed his marriage for the project – which is still unfinished.

Edward Short, 50, and his wife Hazel, from Devon, first appeared on Grand Designs in 2010 to reveal their ambitious plan to transform their 1950s home into an art-deco white lighthouse in 2010.

But in last night’s episode, the music industry executive revealed that the arrival of the recession, building issues and the breakdown of their marriage had left the dream in tatters, and almost a decade on, the lighthouse is still unfinished.

Edward described how the build had destroyed his family over the past decade, saying: ‘If there is one huge guilt I have over everything, it’s the impact on my family.’

He admitted his ‘vanity’ had put his wife Hazel through a ‘horrendous time’, leading to their split last year. 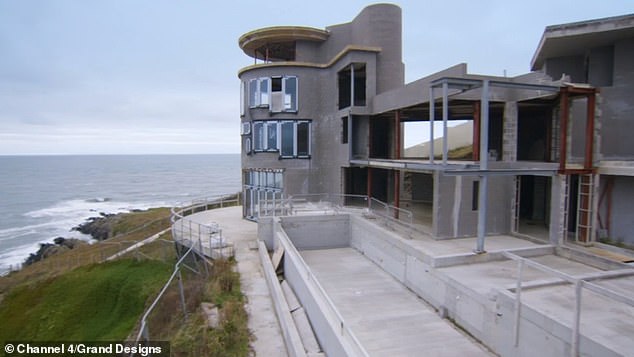 Edward Short, 50, from Devon, revealed how the property had left his family in tatters and said he was £4 million in debt 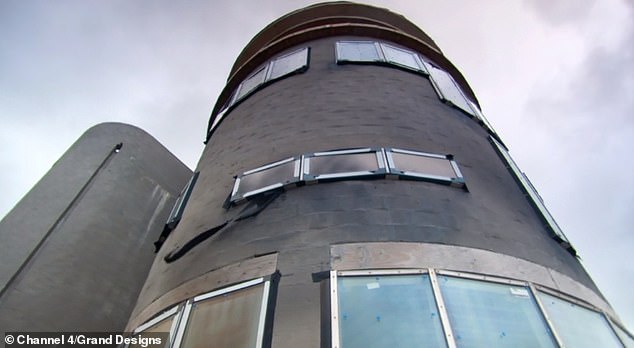 The ambitious self builder had dreamed of building a white art-deco lighthouse, but ran out of money in summer 2017, when the project halted 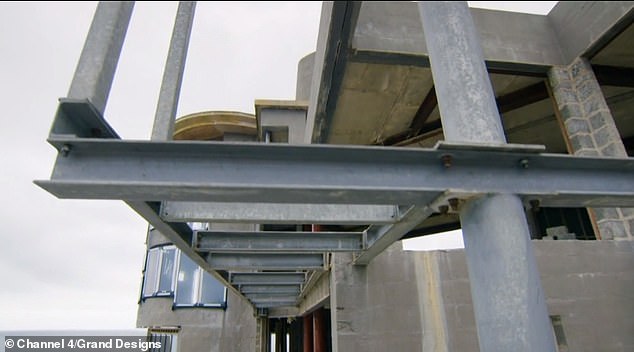 The house was described as ‘a skeleton’ on Grand Designs last night, but Edward insisted he wanted to finish the home

There are very few finished rooms in the property, with the ‘dining room’ (pictured above) one of the nearest completion

On last night’s programme, Edward explained that he’d long dreamed of building a lighthouse on the cliff – but said several factors got in the way.

‘I always looked at it and thought it would be so cool to knock it down and build a lighthouse,’ says Edward, speaking of how he decided to revamp their existing property.

‘Once you get a dream like that in your head it just doesn’t budge. It’s just one of those spots where you could expect to find that type of building.’ 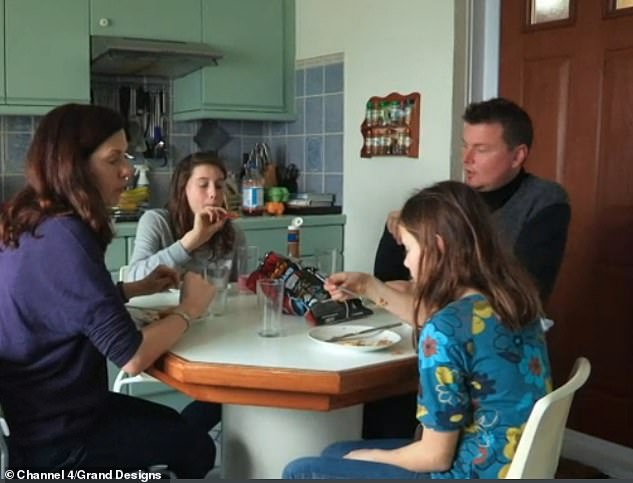 Edward Short, 50, and his wife Hazel, appeared together on last night’s episode of Channel 4’s Grand Designs to describe their ‘dream’ of building their lighthouse home 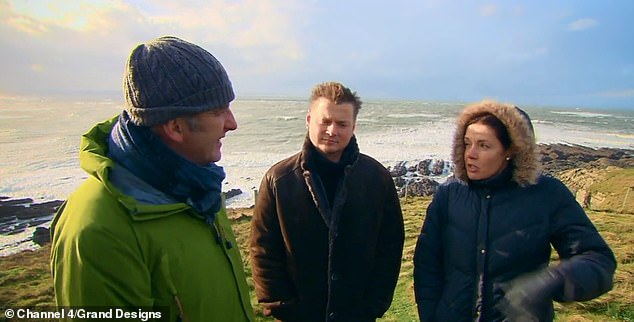 The couple said they planned to tear down their family home and build an enormous lighthouse in it’s place, costing £2.2 million and taking 18 months

The couple planned to build the luxury home, comprised of a huge circular tower and spectacular glass-edge infinity pool, in just 18 months.

The six-bedroom house, which they hoped would also feature a home cinema, a sauna and steam room, would boast panoramic views across Croyde Bay to the north, as well as to Saunton beach and Braunton Burrows to the south.

They hoped it would cost £2.2 million, but it quickly became apparent the build was impossible to complete.

Edward struggled to acknowledge the project was ‘dangerous’ for the construction team to work on due to its clifftop location. 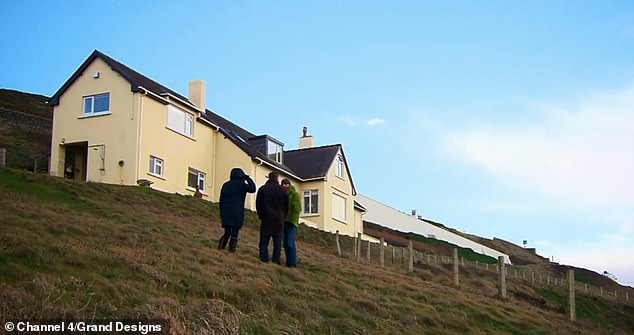 The couple, who lived in a fairly modest house on the clifftop (pictured) before they started the build, explained they wanted a house which would do the site ‘justice’

He said: ‘That’s a dangerous site for a construction team to work on. I think professional fees are around a quarter of a million, but they will make sure it’s done properly.’

The house required complex engineering, with the couple sinking 25 ‘anchors’ into the rock in order to support the home.

But by February 2012, the financial collapse meant they had to put plans on hold and they started to build a smaller building further along the coastline which they nicknamed the ‘eye’.

In February 2016, Edwards secured a loan of £2.5 million from private investors, which he admitted he was depending on to finish the build.

The challenges of the build quickly became evident, with the couple struggling to stay within their budget or on deadline

He told Kevin the project had become a nightmare, saying: ‘Terrifying is an adjective that doesn’t really sum it up if I’m honest.’

When Kevin asked if he could have compromised, Edward said: ‘You are right but the concept is very difficult to walk away from. No to compromise. To owe over £2million now is scary you think “Christ this is mounting up”.’

With the financial pressure growing, Hazel said she was becoming increasingly worried.

She said: ‘Worse case scenario is we will have to sell the whole thing. Yes, that’s a scary thing and yes, that keeps me up at night.’ 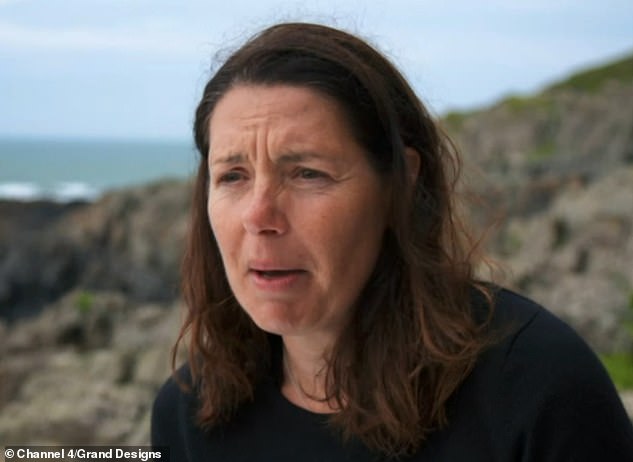 With debts of over three million, the couple were trapped by the thought that if they were to finish the project, it could end up selling for £7 million.

But when Kevin returned to the property earlier this year, he found it was still unfinished.

The presenter described it as ‘the bare bones of a house and more like a desolate carcass’.

He went on to say: ‘It’s a little bit like finding the wreckage of a building on a seashore’. 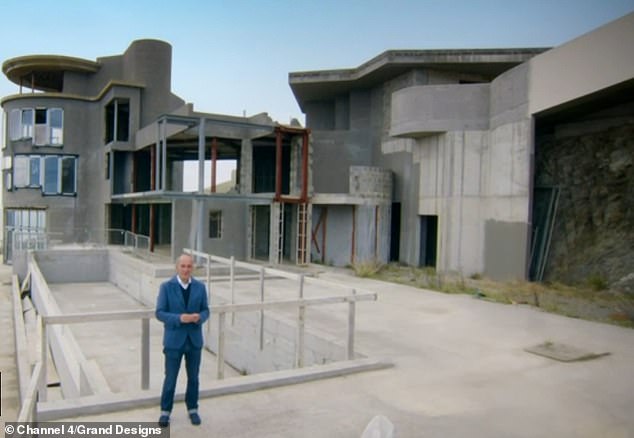 When Kevin returned to the house earlier this year, he found the property was a building site, and called it ‘a skeleton’ 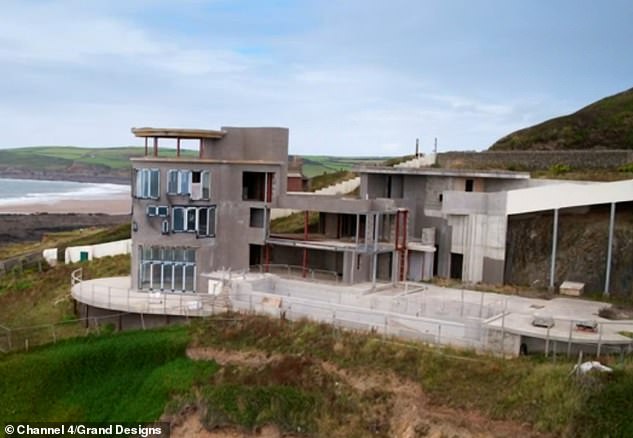 The project proved too ambitious for the couple, and left them in £4 million worth of debt after almost a decade of building

He revealed: ‘A bit of an eyesore is the feeling at the moment. I sometimes wonder if I might have been too ambitious. There’s what I want, and there’s reality.’

Admitting he was almost £4 million in debt, he told Kevin that he’d taken to staying in ‘The Eye’, the home he spent £1 million building a short distance down the coast.

But he also said he wasn’t permitted to live there permanently due to risks of being too close to the building site of the lighthouse.

Edward unveiled the one finished part of his property, The Eye, a smaller home a short way down the coast from his skeleton lighthouse 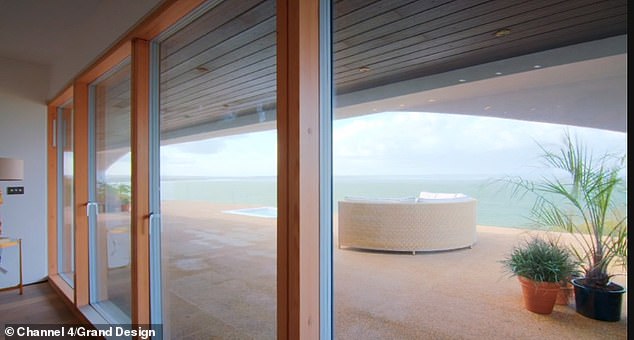 Despite the stunning finish, he said that he was unable to live in the house permanently due to it’s proximity to the lighthouse 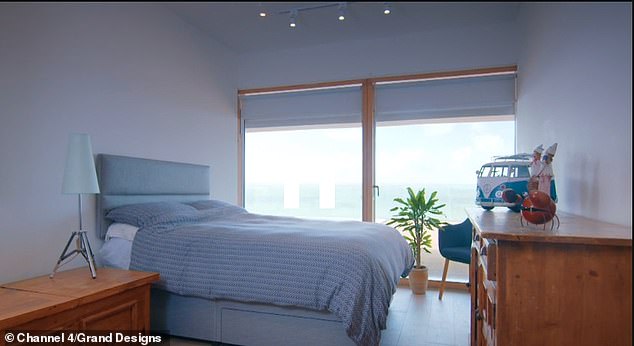 ‘The Eye’ features a huge frontal balcony which can be accessed from every bedroom, with stunning sea views

He told Kevin his marriage had collapsed due to the strain, insisted he would still try to finish the building.

He said: ‘I don’t have the option of not finishing. To finish it may take over £2 million.

‘This is a beast, this is a baby that is so hungry it will eat me. It’s that savage now. The end-game could still be bankruptcy.

‘If there is one huge guilt I have over everything, it’s the impact on my family.’

Edward said he hoped he could continue building the home, adding that he thought it would take £2 million to finish the property 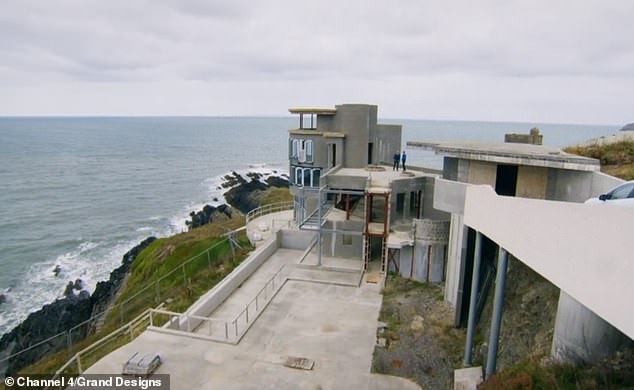 Despite the state of the desolate building after a decade of development, Edward said he couldn’t stop trying to finish the lighthouse

He said the build had destroyed his marriage, saying: ‘We parted properly last year.

‘I put her through a horrendous time with this, knocking the family home down, putting all our money into it, no one has any idea what the outcome is. It doesn’t get much worse than that.’

‘I have to take it on the chin – my ambitional vanity has probably collapsed the marriage. That’s the truth.’

Viewers were shocked by the programme, and slated Edward for his ‘greedy’ attitude. 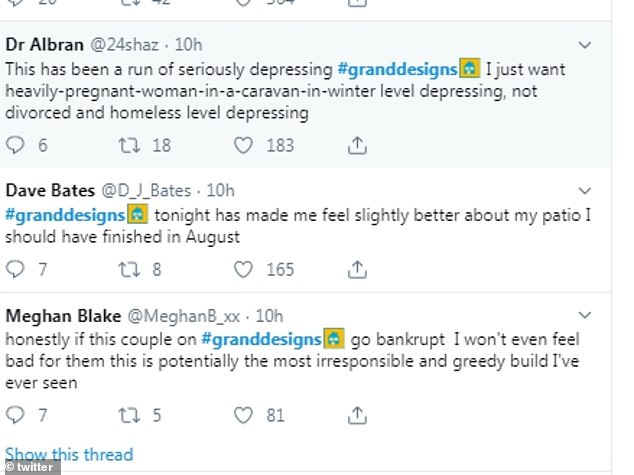 Viewers slated the family online, with many commenting on how ‘greedy’ the builders had become

One said: ‘Christ, a perfectly good home demolished, a beautiful cliff destroyed, family life in ruins, and divorce. Has there ever been a more tragic Grand Designs?’

Another added: ‘I never want to wish ill on anyone but I’ve never wanted anyone to fail more than this greedy, entitled family.’

Another said: ‘Honestly this couple on #GrandDesigns go bankrupt I won’t even feel bad for them. This is potentially the most irresponsible and greedy build I’ve ever seen.’

Palestinian militants agree ceasefire after exchange of...
Mothers whose two-year-old daughter starved to death are jailed for six years
Wife of John McCririck reveals racing pundit died following battle with cancer and sepsis
Police hunt local mechanic after church-going lady is found killed in ancient almshouse
Sydney stabbing: Man arrested after woman is found dead and others injured
Four in five British children can't recognise a bee and less than half know what stinging nettle is
Schoolchildren from affluent families are TWICE as likely to drink alcohol - and they use drugs more
How Feargal Sharkey is leading the fight-back against greedy water companies draining chalk streams