Tehran has lifted a ban on female supporters attending football matches and thousands of Iranian women snapped up all the tickets in less than an hour.

The change in ruling comes after demanded women be able to attend football matches or for to face suspension from the association.

The Islamic republic has barred female spectators from football and other stadiums for around 40 years, with clerics arguing they must be shielded from the masculine atmosphere and sight of semi-clad men.

The directive came after a fan dubbed ‘Blue Girl’ died after setting herself on fire in fear of being jailed for dressing up as a boy to attend a match. 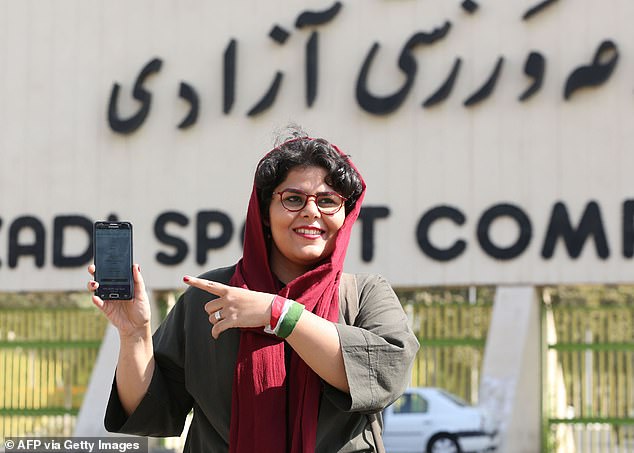 Tehran has lifted a ban on female supporters attending football matches after pressure from FIFA. Iranian sports journalist Raha Pourbakhsh shows purchased electronic tickets for the Iran – Cambodia World Cup 2022 qualifier match during an interview in front of Azadi stadium in the Tehran on Wednesday 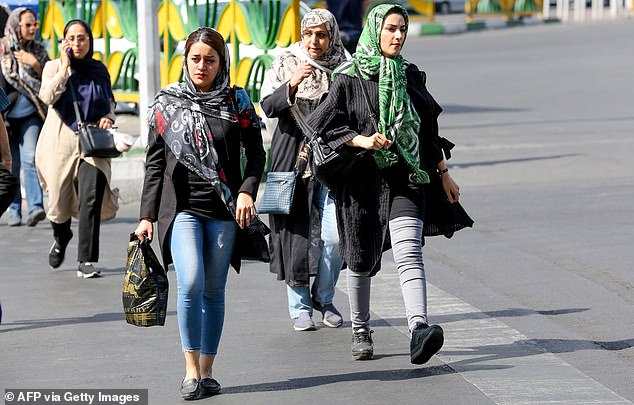 Iranian women walk in Sadeqyeh Square in the capital Tehran. After a decades long ban, football seats are finally being made open to Iranian women. The directive came after a fan dubbed ‘Blue Girl’ died after she set herself on fire in fear of being jailed for dressing up as a boy to attend a match 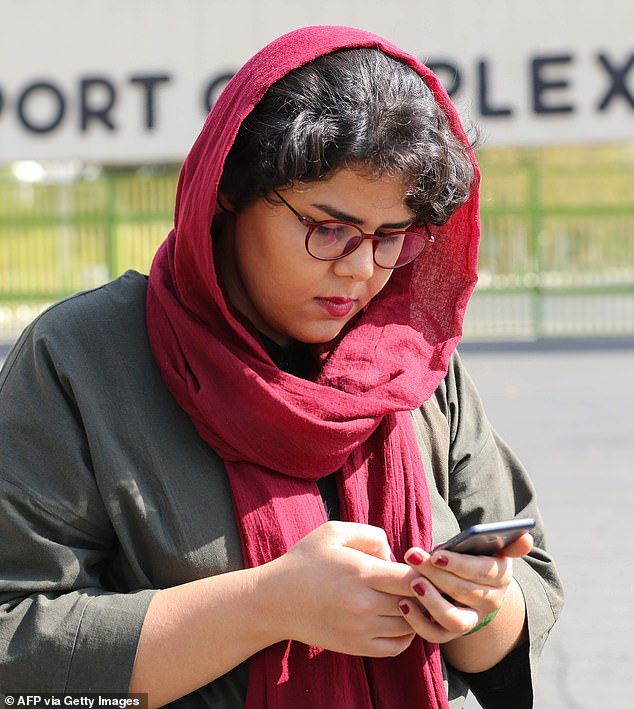 Iranian sports journalist, Raha Pourbakhsh, can be seen in the process of booking tickets for the World Cup qualifier between Iran and Cambodia. It is estimated that 3,500 women booked tickets on Thursday with the seats selling out in under an hour

Women were quick to get their hands on tickets to attend Iran’s 2022 World Cup qualifier against Cambodia at Tehran’s Azadi Stadium on Thursday.

The first batch sold out in less than an hour, and additional seats were also snapped up in short order, state media said.

The sports ministry said the 100,000-capacity stadium – whose name means ‘Freedom’ in Farsi – was ready to host even more women.

One of the 3,500 women to have secured a ticket was Raha Poorbakhsh, a football journalist.

‘I still can’t believe this is going to happen because after all these years of working in this field, watching everything on television, now I can experience everything in person,’ she said.

But Poorbakhsh said she was aware of many other women without tickets and some were expected to travel from as far away as Ahvaz in southern Iran in the hope of still getting one.

There have been rare occasions in recent years when Iranian women have been allowed to watch matches, but this time they were free to buy their own tickets, albeit a set number.

Those lucky enough to attend will be segregated from men and watched over by 150 female police officers. 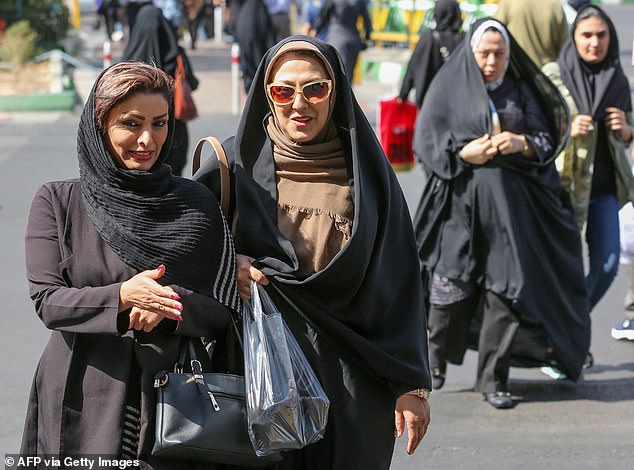 People on the streets of Tehran said they supported the decision to allow women into stadiums.

‘I would like there to be freedom for women, like men, to go freely and even sit side by side without any restrictions, like other countries,’ said a woman who gave her name only as Hasti.

Nader Fathi, who runs a clothing business, said the presence of women could improve the atmosphere in stadiums.

But he said ‘they will regret it’ if they are exposed to ‘really bad swear words’ and ‘bad behaviour.’

The bumpy road Iranian women have travelled in order to gain free access to stadiums has not been without tragedy.

Sahar Khodayari died last month after setting herself ablaze outside a court in fear of being jailed for attending a match.

Dubbed ‘blue girl’ because of the colours of the club she supported – Tehran giants Esteghlal FC – she had reportedly been detained last year when trying to enter a stadium dressed as a boy.

Her death sparked an outcry, with many calling for Iran to be banned and matches boycotted.

The judiciary dismissed reports she had been told she would be jailed, and Khodayari’s father said she did not ‘sacrifice’ herself for any cause.

Ahead of Qatar 2022, FIFA has pressed Iran to allow women to attend qualifiers.

But Iran denied its decision to allow women into Thursday’s match was a result of ‘foreign pressure.’

‘The presence of #women in stadiums is due to the internal social demands and government’s support of those demands,’ government spokesman Ali Rabiei tweeted.

The ban on women in stadiums is not written into law or regulations, but it has been strictly enforced.

Since the 1979 Islamic revolution, women have only had rare access to stadiums in Iran.

In October, as many as 100 ‘handpicked’ Iranian women watched a friendly against Bolivia.

The day after, the prosecutor general warned there would be no repeat, saying it would ‘lead to sin.’

Then in November, a select group of about 850 women attended a match between Esteghlal’s Tehran rivals, Persepolis FC, and Japan’s Kashima Antlers.

The issue continues to be deeply divisive in Iran.

Reformists have welcomed the latest move, but conservatives have come out strongly against it.

The Donya-e-Eqtesad financial newspaper called it ‘a step to weaken a taboo and also free Iran’s football of the looming shadow of FIFA’s punishment.’

But the ultra-conservative Kayhan daily said women were more concerned about economic issues.

Billionaire with $25million yacht teams up with surfers deliver supplies to Malibu wildfire victims
Lady Of The Hills identified after 15 years as Thai bride as her British husband denies killing her
The High Street clothes size lottery: Which store is the best match for your figure?
Horror as girl, 12, is abducted on her way to school in Leeds
New Yorkers cheer in the streets as light is restored to Manhattan
Fury as police 'act like bouncers' on school gates to 'enforce new dress code'
Trapper plays with 'gator until it tires, pulls it from...
Labour Party chairman Ian Lavery is 'seriously considering' leadership bid