The protestors clogging up the streets of central are annoying, I agree, but dismiss them at your peril.

Look past the inconvenience, the traffic chaos and the silly slogans and you won’t see many ‘crusties’ (as mistakenly described them) but fresh faced idealistic young people, pensioners and workers.

Of course, there’s the usual quota of luvvies on parade – Mark Rylance, Ruby Wax and Juliet Stevenson, but they are a very small minority.

Any protest group which brings twenty thousand people onto our streets is bound to be controversial, especially when it results in 470 arrests in less than two days and almost every police cell in London is full.

That’s folk who think that demonstrations are ‘ok’ as long as they are tidy, happen on a weekend, and nowhere near them. In other words, a demo that’s bound to be totally ineffective. 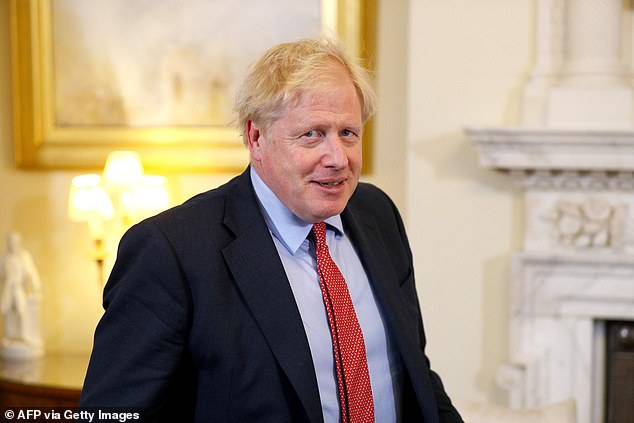 Look past the inconvenience, the traffic chaos and the silly slogans and you won’t see many ‘crusties’ (as Boris Johnson mistakenly described them) but fresh faced idealistic young people, pensioners and workers, writes Janet Street-Porter 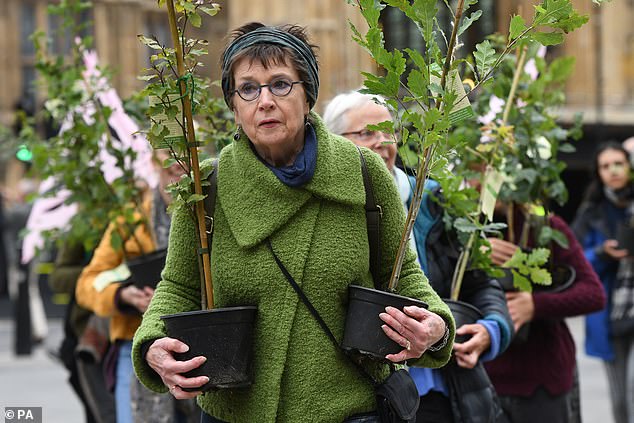 A protester carrying saplings to place in Old Palace Yard outside Parliament, during an Extinction Rebellion (XR) protest on Tuesday

The point of the current protests (which are also taking place in Berlin, Madrid, Amsterdam and New York) is to achieve maximum publicity for their cause, to drive home the point that unless politicians start taking responsibility for the environment, we are just tinkering with the problem.

The reaction in some quarters has been astonishing. Boris Johnson described those taking part as ‘importunate nose-ringed protestors’, ‘camped in hemp-smelling bivouacs’ after he travelled (by car) to the launch of a book about Margaret Thatcher.

Lord Fraser, a former investment banker who was once Treasurer of the Tory party, took to the streets outside his posh house in Westminster in his white towelling dressing gown to berate the demonstrators for disturbing his sleep.

And, is it smart to mock someone with Aspberger’s? Piers Morgan sparked fury on social media today by imitating Greta Thunberg, on his morning TV show.

According to Piers, Greta is just making kids scared. I disagree – she is inspiring a whole generation.

This young girl has been mocked by the two most powerful men in the world President Trump and Vladimir Putin – who both patronisingly described her as ‘nice’.

Putin, who has claimed that Greta is being exploited by climate change groups, is so uninformed about alternative energy sources that he recently criticised wind turbines for killing birds and disturbing worms!

Both men have no intention of taking climate change seriously – and the recent UN summit in New York ended without achieving anything of note.

For years, Greenpeace and other worthy charities have tried to get world leaders to understand the threat to the planet seriously. Greta – and the protest group Extinction Rebellion – have brought climate change to the front of the news agenda in a dramatic fashion.

Since ER’s demonstrations last April, thousands of people have joined the cause, people of all ages. Look at the demonstrators glued to buildings and camping out in London’s Whitehall, the majority are certainly not hippies but ordinary people who feel passionately and want the rest of us to start demanding action too.

I know how they feel. As a teenager, I marched in London against the war in Vietnam, against apartheid, and supported the Campaign for Nuclear disarmament. 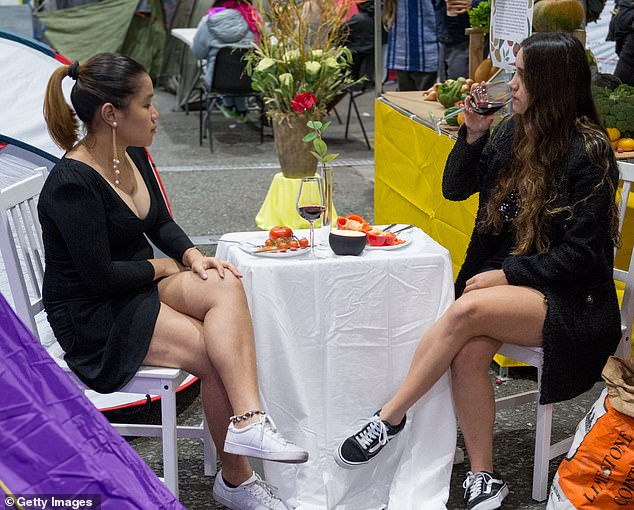 Two women appear to enjoy a glass of wine and a meal of tomatoes and peppers on Tuesday morning after occupying Smithfield Market, which is a sea of tents and fruit and veg today

All these events were non-violent, except for one anti-war protest outside the US embassy in Grosvenor Square, when the police on horseback charged the marchers.

Then, the mood changed and radical lefties got involved as a way of confronting a right wing government.

The poll tax riots in central London in 1990 ended in violence with buildings and vehicles being damaged and there were 339 arrests.

But the fury was matched by the mood of the electorate – 78% of whom did not agree with Margaret Thatcher’s proposed new tax. And two years later, John Major cancelled it.

There was widespread criticism of the police tactics used to control demonstrators during the G20 protests in London, during which 35,000 people took to the streets. The following year, student protests against tuition fees saw violent confrontations and dozens of arrests. 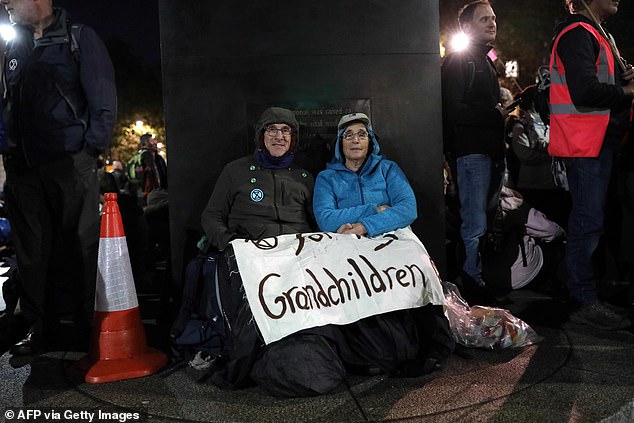 Earlier this year, the police were criticised for not adopting more forceful tactics when Extinction Rebellion protestors took over Oxford Circus and blocked bridges for days on end.

Now, the police are being taken to task again for not being more forceful. But they are being confronted with highly organised, peaceful civilians, people who are glueing themselves to official buildings and pavements in key thoroughfares.

This kind of protest is not going to stop overnight, so what should be the reaction of our elected leaders?

Mocking protestors, like Boris has done, won’t work. One critic said that the movement will only be successful if it appeals to middle England.

But look past the fancy dress and whacky slogans, and listen to the people holding placards. They are resoundingly middle class. Many are protesting for the first time.

The section of society that cares about animals, loves watching the BBC’s David Attenborough and thinks he should be running Britain, and carefully recycles everything in the correct containers – are all sympathetic to the climate change cause. 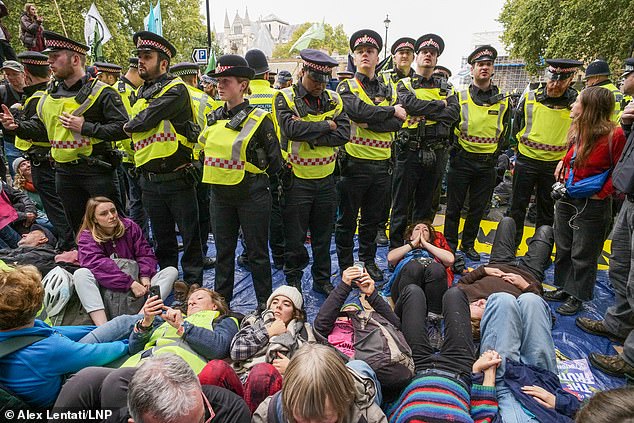 Arrests of Extinction Rebellion demonstrators takes place in Abingdon Street, outside the Palace of Westminster

The government is out of step with public opinion. We are ready for stricter legislation. We would pay an airport tax.

We want to ban lorries in city centres during the day. We can see how the air quality in our towns is appalling – and that it’s all down to the fumes from cars.

This week, our ‘environmentally-friendly’ government over-ruled planning inspectors and green-lit a new gas power plant at Drax, in spite of experts voicing concerns about it’s impact on greenhouse gas emissions.

The government has already cancelled the carbon capture equipment at Drax, citing cost.

You can mock the women wearing scary masks and spraying blood all over government offices. And yes, there’s a lack of joined-up thinking on the part of protestors who filed off to McDonalds for their lunch.

Yes, not everyone has banned unnecessary consumption, young people haven’t stopped buying trainers and travelling by car. Even so, there’s much to admire about the climate change protestors.

I suggest Boris gets out of his official car and tries listening for once.