This takeaway owner goes the extra mile for his customers – running out of his kebab shop to launch a ‘flying doner wrap’ like a missile through a truck driver’s window as he drives past.

David Crossley, 25, filmed the funny scene from inside his truck on Sunday while driving past Sizzlers Shaw in Shaw, Greater Manchester, on way his to work.

The hilarious footage shows the owner of the shop Arslan Anwar Saifi, 31, running up to the side of the truck while Mr Crossley shouts ‘yeah, throw it in, go on!’ as he waits at traffic lights. 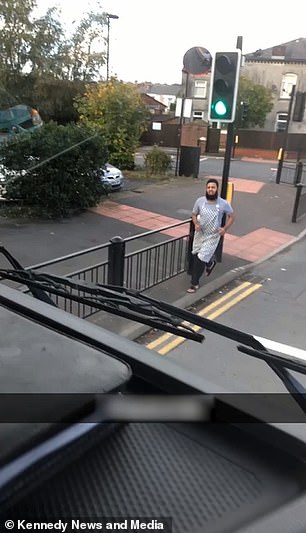 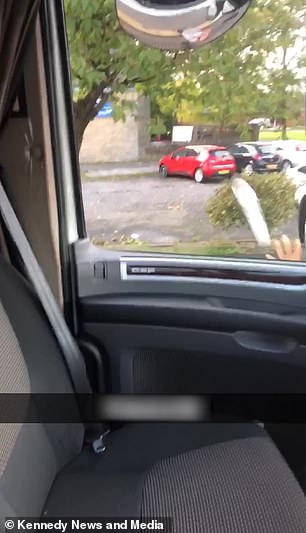 Truck driver David Crossley films his friend Arslan Anwar Saifi approaching with his kebab, left. The kebab is launched through the open window of the truck in Greater Manchester, right 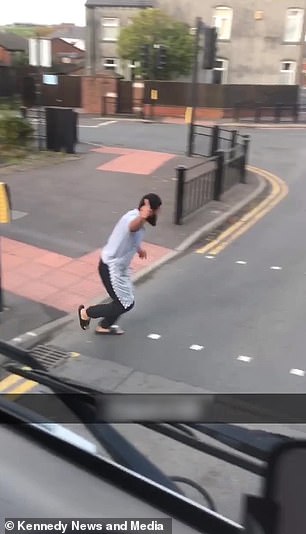 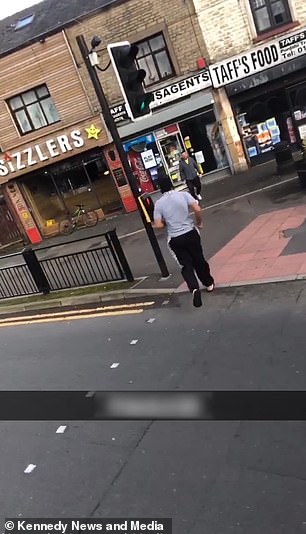 Mr Saifi began the unusual routine six months ago because Mr Crossley, of Rochdale, Greater Manchester, can’t stop to pick up orders in his truck

The foiled wrap then rockets in through the window while the father of two laughs and shouts ‘yes, brother!’ and ‘go on Arslan’ as the takeaway owner hurries over the road back to his shop.

Mr Saifi began the unusual routine six months ago because Mr Crossley, of Rochdale, Greater Manchester, can’t stop to pick up orders in his truck.

Mr Crossley said: ‘It’s just great. There are not many people who do anything for you these days.

‘He understands the difficulty that I can’t stop and he’s never moaned about it – he just does it for me. He’s a great guy, a top guy. And I laugh because he runs out in his sandals.

‘I had a time when my daughter Emily Grace [six] wasn’t too good. I had to take a lot of time off work and it’s a lot of financial strain to keep a house going so Arslan would just say “leave it, I don’t want it” and I just grew a friendship with him.

‘He’s a great person. He has children of his own and when I was in hospital with my daughter he came up and greeted us.

‘I’ve never seen him as the takeaway guy, he’s always been a friend – always nice, polite and helpful whenever I’ve needed him.

‘I just wasn’t expecting [the reaction to my Facebook post]. I just put it up for a bit of a laugh – I didn’t expect 17,000 people to find it funny.

‘I find it funny so I’m hoping everyone else finds it funny, but I didn’t expect it to go so big.

‘I’ve had loads of people messaging me saying “that’s the funniest video I’ve ever seen”. There are people I don’t even know messaging me about Mr Saifi and stuff he’s done for them and saying “oh my god, he’s a great guy”.’

About once a week Mr Crossley drives past the shop in his truck and, feeling peckish, rings up Mr Siafi and asks him if he can deliver his order through the window as he can’t stop.

The traffic lights opposite the outlet change frequently and Mr Crossley drives up slowly as he gets close – then as the lights go amber, he gives a toot of his horn and Saifi runs out.

Mr Crossley said: ‘There’s nowhere to stop in a truck [around there] so I can’t pull up just to go in and get some tea. And there’s no time to stop these days in transport – you’ve gotta just keep going.

‘So it’s just practical that as I drive past he throws it in the window and then I just have to have my tea then.

‘It all started when I had a passenger with me and there was a massive traffic jam around there. The passenger who was with me at the time just leaned out the window and grabbed it. But when I don’t have a passenger, how is [Arslan] going to do it?

‘So once I just rang him up and said “I’m in the truck – is there any chance you can run outside and pass it up to me and I’ll pay you next time?”‘

When Mr Crossley was a child he often visited Mr Siafi’s old kebab shop in Rochdale and they got to know each other well.

Mr Siafi said: ‘I was chuffed with the video. A lot of my friends and customers on Facebook are sharing it.

‘I didn’t know he was making the video so my reaction was natural. If I knew what he was doing my reaction probably would have been different.

‘[I do this for David because] he’s a nice lad, he’s had a few hard times.

‘It’s just the way he’s been from day one – the way he approaches you and calls you ‘brother’ – it just gives you a different kind of feeling.’

Mr Crossley posted the video on Facebook straight after he filmed it with the hilarious comment ‘No place to stop in the truck? No problems – flying doner wraps available’.