The humpback whale spotted swimming in the River Thames over the past few days has died, divers have revealed.

The aquatic mammal, nicknamed Hessy, had swam around five miles down the river after it was first sighted near Dartford Bridge in Kent on Sunday.

But experts tracking the whale said they spotted it’s lifeless body floating in the water near Greenhithe – where it was last seen alive, according to ITV.

Rare sightings of the whale had delighted onlookers and whale watchers, who flocked to the banks of the Thames to catch a glimpse of the elusive animal.

But British Divers Marine Life Rescue – who had been keeping a close eye on the creature – had expressed concern over the humpback’s health, after it appeared underweight and had scarring. 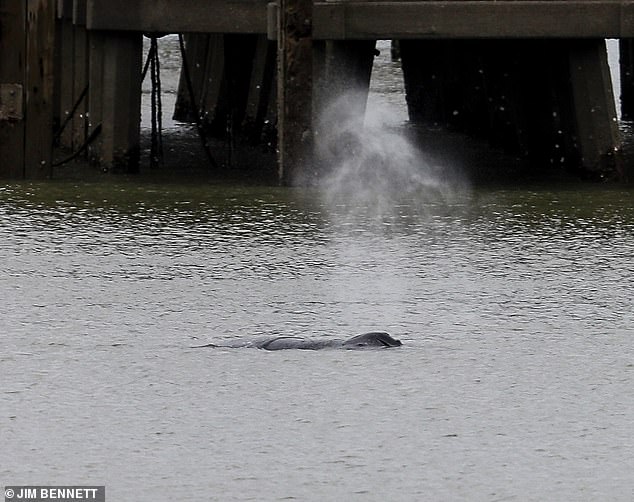 They believe the juvenile whale made a navigational error and swam up the Thames from the North Sea last week on a spring tide when the water level is at its highest.

The whale had been swimming back and forth from Tilbury to Erith, with experts hoping it would make its way back to sea.

But today experts feared the whale could have been stuck for up to a week in the Thames until there was another spring tide raising water levels again.

It is likely there was not enough food for the creature, thought to be 25-32ft long and low on fat reserves.

Another humpback whale which entered the Thames 10 years ago is known to have died of starvation. 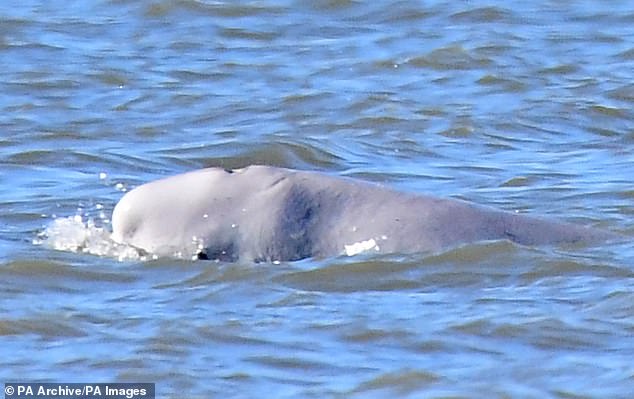 The mammal, nicknamed Hessy, has been spotted several times since the weekend, with the latest sighting near Erith Reach, around five miles west of Greenhithe

While Benny the beluga who set up home in the river last year could use sonar to target prey such as crabs on the bottom, the humpback is a filter feeder taking in vast amounts of water to catch fish.

She said: ‘From photographs we have seen, it doesn’t seem to have a lot of fat reserves.

‘It is swimming up and down the river so it is using more and more reserves all the time.’ 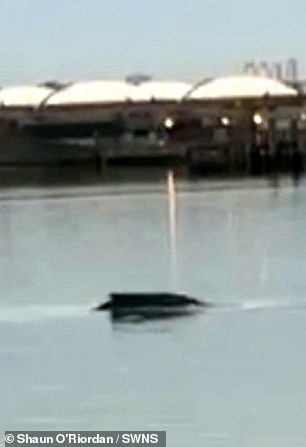 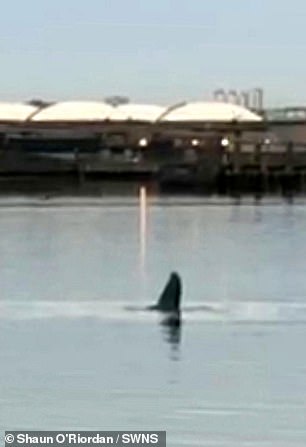 The charity did not sent any boats out to monitor the whale as it was feared it could stress the animal.

What is a spring tide in the River Thames?

Parts of the River Thames is tidal, due to the flowing water from the North Sea.

Before Teddington Lock was installed, the river was tidal as far as Staines, about 16 miles (26 km) upstream.

The tidal stretch of the river is known as ‘the Tideway’, and are often recorded at London Bridge.

A spring tide – a tide just after a new or full moon – is when there is the greatest difference between high and low water.

The last spring high tide at London Bridge was on October 1, with the next on October 17.

The whale has signs of ‘historic entanglement’ scarring on its dorsal fin but looks unharmed apart from that.

A small group of whale watchers have gathered at Greenhithe today in the hope of catching a glimpse of the mammal after it was first spotted near Dartford Bridge in Kent on Sunday.

Linton Hopkins, 50, ventured out to see his third whale in the Thames.

‘At the moment I’m not too confident of seeing it, hopefully it’s gone.

‘It’s a wild creature and shouldn’t be here. It would be nice to see it but ideally it will have swam out.

‘It will be very confused and very frightened. They’re sea creatures after all. They’re deep diving animals and it’s not deep enough to dive here.

‘I wonder what it’s feeding on, there’s not a lot for it to eat here.’

This will be the third whale Mr Hopkins has seen, having snapped Benny the Beluga last year and the headline making mammal that swam through central London in 2006. 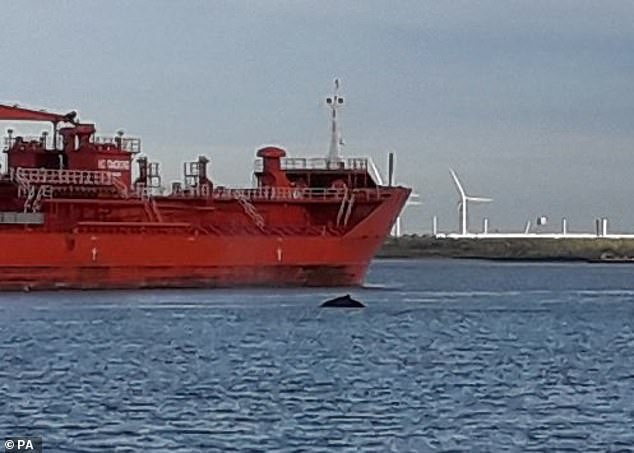 He said: ‘I saw the beluga in Gravesend last year and I saw the whale in central. That was amazing – it was right outside my office I was very lucky.

‘I had to come today. It would be nice to see but it would be better if was out at sea.

HUMPBACK WHALE POPULATIONS AND THEIR THREATS

Humpback whales live in oceans around the world. They travel incredible distances every year and have one of the longest migrations of any mammal on the planet.

Some populations swim 5,000 miles from tropical breeding grounds to colder, plentiful feeding grounds – this is why it is difficult to estimate population size, according to the National Oceanic and Atmospheric Administration (NOAA).

Humpback whales live in oceans around the world. They travel incredible distances every year and have one of the longest migrations of any mammal on the planet

Some populations (such as those off eastern and western Australia) are believed to number in excess of 20,000 animals—a remarkable recovery given that the same populations were almost eradicated by whaling almost sixty years ago.

By contrast, the smallest known population is one which inhabits the Arabian Sea year-round, and may number as few as 80 individuals.

Threats to humpback whales include decline in food like Krill due to a combination of climate change and industrial-scale fishing.

Humpback whales can become entangled by many different gear types including moorings, traps, pots, or gillnets.

Once entangled, if they are able to move the gear, the whale may drag and swim with attached gear for long distances, ultimately resulting in fatigue, compromised feeding ability, or severe injury.

There is evidence to suggest that most humpback whales experience entanglement over the course of their lives, but are often able to shed the gear on their own.

Humpback whales are vulnerable to vessel strikes throughout their range, but the risk is much higher in some coastal areas with heavy ship traffic.

Underwater noise threatens whale populations, interrupting their normal behaviour and driving them away from areas important to their survival.

Sound has been shown to increase stress hormones in their system and mask the natural sounds humpback whales require to communicate and locate prey.

Queen Letizia of Spain joins King Felipe for awards ceremony
No-deal Brexit will caused smaller 'economic shock' than feared thanks to ministers' plans
Tony’s Chocolonely pledges to make the cocoa industry 100% slave free
Saudi Arabia arrests eight women's rights activists including two US citizens
Sex positions with deep penetration do NOT increase your chances of conceiving, say experts
Queen Letizia of Spain dazzles in a black dress as she arrives at an awards ceremony in Madrid
Former Nissan chief Carlos Ghosn 'smuggled' out of Japan
UK bound passengers must isolate for two weeks from today - but plan is already in chaos