The UAE’s first female pilot has opened up about her four-year battle to wear a headscarf at work, describing the prejudice she faced for flying a plane.

Huda Al Musallami, 39, from Dubai, who grew up loving planes, joined airline Emirates as cabin crew before rising up to the position of pilot 15 years ago, in 2004.

She has been flying planes for Abu Dhabi’s national airline Etihad for the last four years.

However her successful career has not been without its hurdles, and Huda has told how she faced prejudice from passengers who she says ‘don’t expect an Arab woman to get this far’ and joked that women “cant drive cars let alone planes”.

Additionally, she had to be ‘discreet’ leaving the house at 3am for her early shifts, because it was unheard for a woman to do that in her hometown.

But despite her battle, her success inspired has inspired sister Rasha, 33, to join her as cabin crew, and she hopes other women will as well. 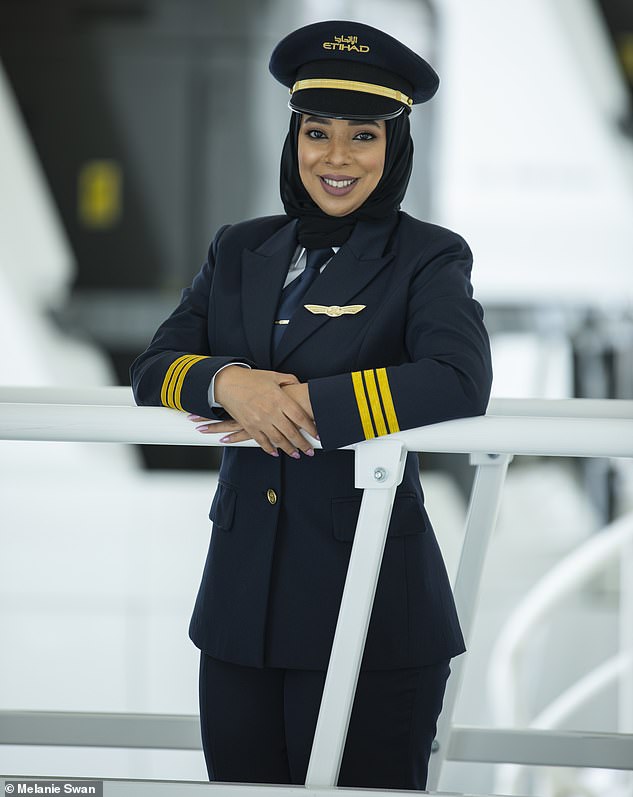 The UAE’s first female pilot Huda Al Musallami, 39, has opened up about her four-year battle to wear a headscarf at work and the prejudice she faced 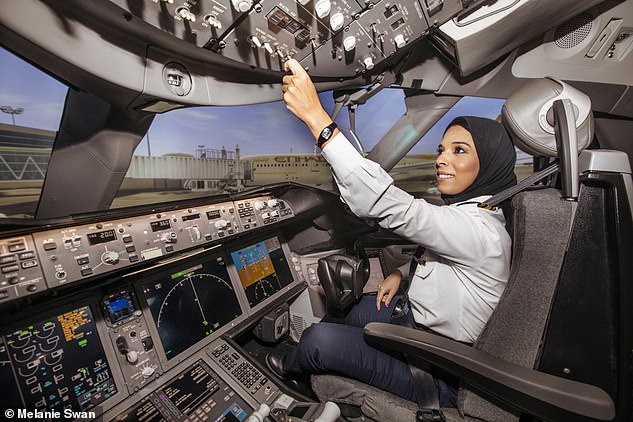 She first joined Emirates as cabin crew before being invited to train as a pilot as part of a scheme to nationalise industries dominated by expatriates. (Huda on an Etihad plane)

The trail-blazer first battled the General Civil Aviation Authority for the right to wear a headscarf, a symbol of her identity and religious beliefs.

‘I pushed for it to allow our culture to be in harmony with normal staffing and regulation. It took four years of fighting,’ she said.

‘It was new not only to society but to the company so it came with a lot of challenges,’ she explains. ‘I was like an experiment.’

‘We were trying to find if there was any legislation worldwide but at the time, there was nothing.’

Graduating with a bachelors degree in business and IT, she applied to join Emirates when taking to the skies was only a pipe dream.

She was then offered a space on a pilot training scheme, part of the programme to nationalise industries once dominated by expatriates. 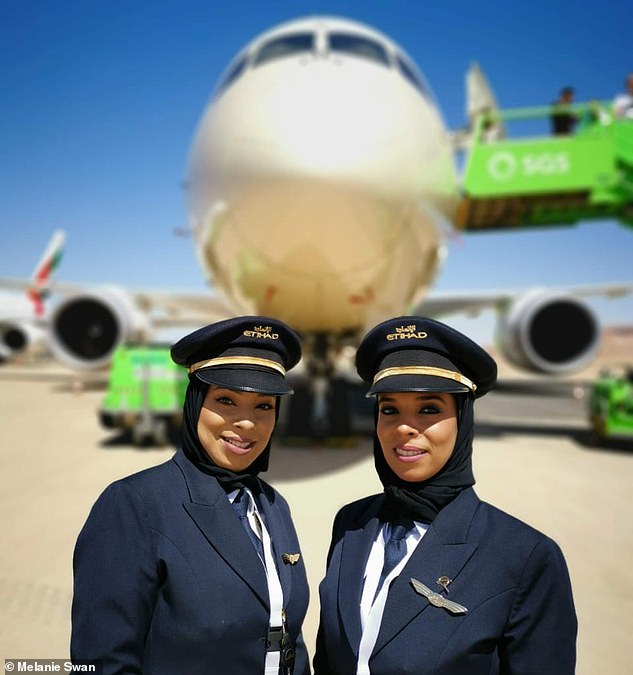 Her decision to take up flying has even inspired sister Rasha, 33, to quit banking and become a pilot as well. The pair were photographed here standing in front of a plane 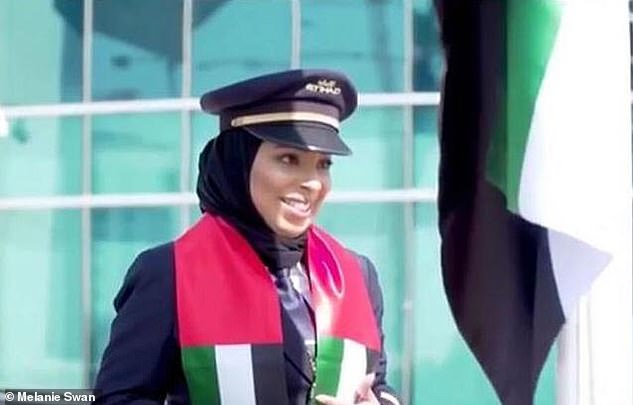 She spent four years campaigning to be allowed to wear a headscarf by the General Civil Aviation Authority, as it is a symbol of her cultural and religious identity

From the UAE’s smallest emirate, Ajman, the first officer loved planes, although she had only visited two countries by air before applying.

For several years, she remained the only woman pilot, and as such, was under the spotlight.

‘It was at my graduation that I finally felt I had proved myself, to prove that women are just as capable to do this as men,’ though there had been many times she questioned this during those years.

‘People told me some very hurtful things during that time, and there was a lot of resistance to my being there, making me constantly question if I had the right to be there, but I proved them all wrong.’

For a woman to leave home in the early hours of the morning, to work shifts, was at that time, ‘awkward’, she recalls.

‘A woman leaving home at 3am for work wasn’t acceptable back then,’ she smiles. ‘I had to be very discreet.’ 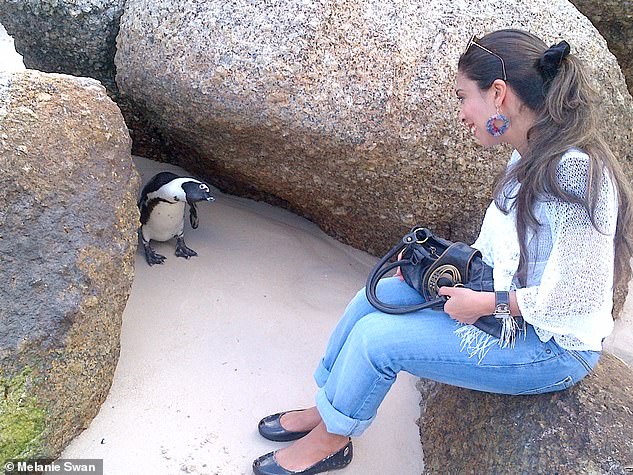 Her work also allows Huda to travel. She is pictured here with what appears to be a Rockhopper penguin in Australia 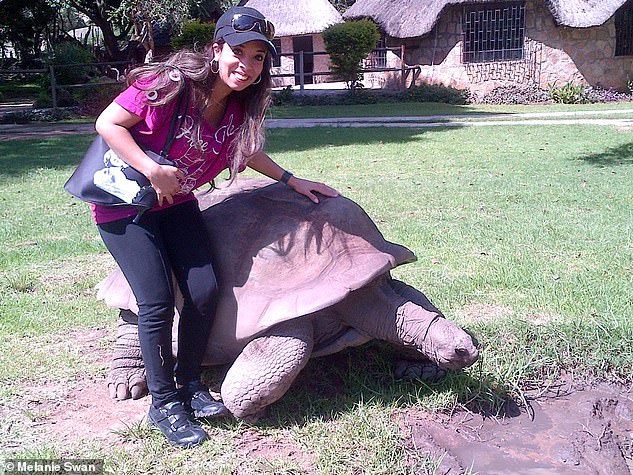 Huda, who always loved planes, was only able to travel to two countries by air when she was small. She is pictured here with a giant tortoise after landing in the country

On board, passengers would be equally cruel.

‘In general, people tend to be very cynical about women drivers so imagine she’s flying a plane,’ she laughs.

However, while now she can look back and laugh, it was tough at the time.

‘Passengers were stressed, they didn’t trust me,’ she says, with. tinge of pain.

It was at my graduation that I finally felt I had proved myself, to prove that women are just as capable to do this as men

‘It was a huge responsibility to bear at the time. There were times I felt that was very heavy, but then I realised that if it wasn’t me, there might be no chance for anyone else.’

She has encountered much prejudice during her travels, from within her own society, and without.

‘Being in uniform with a hijab [headscarf] brings out a lot of this prejudice in people,’ she explained.

She has even faced challenges to enter other Arab countries for wearing the headscarf.

‘People don’t expect to see a Muslim or Arab woman reaching this level,’ she beams. 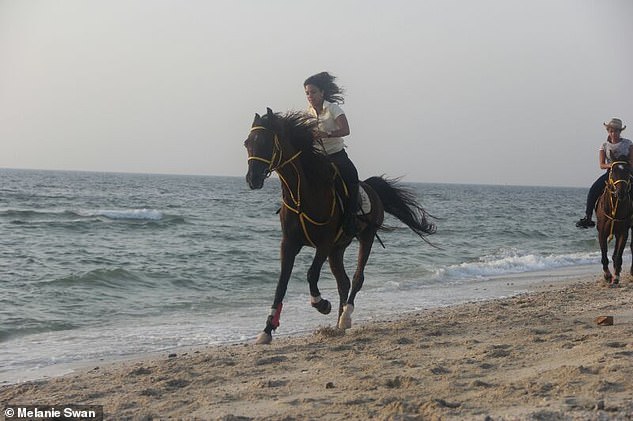 Huda, pictured here riding a horse along a beach, said that wearing a hijab with uniform has brought out a lot of prejudice from passengers 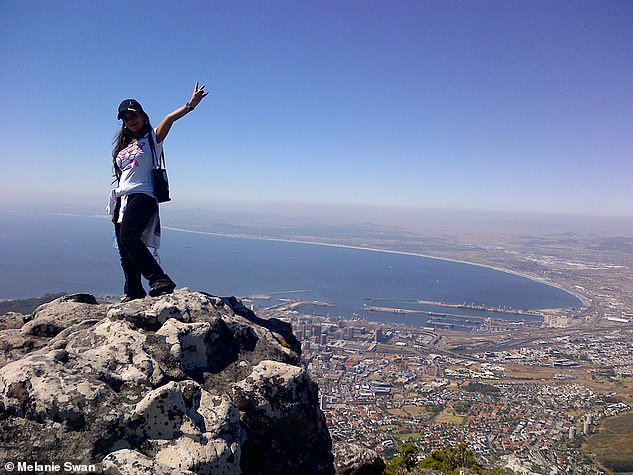 Her work has taken her to many different countries. She is pictured here smiling on top of a cliff above a cityscape

It also brings out hate, in some.

‘People see a hijab and think that means danger, she explained, the 39-year-old taking on the responsibility to represent not only her country, but her faith.

According to CAPA Centre For Aviation, roughly 5.2 per cent of pilots are women, and in the UK, it claims that number is just 4.3 per cent.

Huda’s work has not been in vain. Now, there are many Emirati women across both Etihad and Emirates, following in Huda’s footsteps.

A once male-only environment has been shaken up thanks to her resilience and strength.

‘It has brought a lot of change in these 15 years, to be a woman in such a male dominated profession. Getting the acceptance of men has been the hardest part of the journey,’ she sighs.

‘We [women] were not welcome.’ 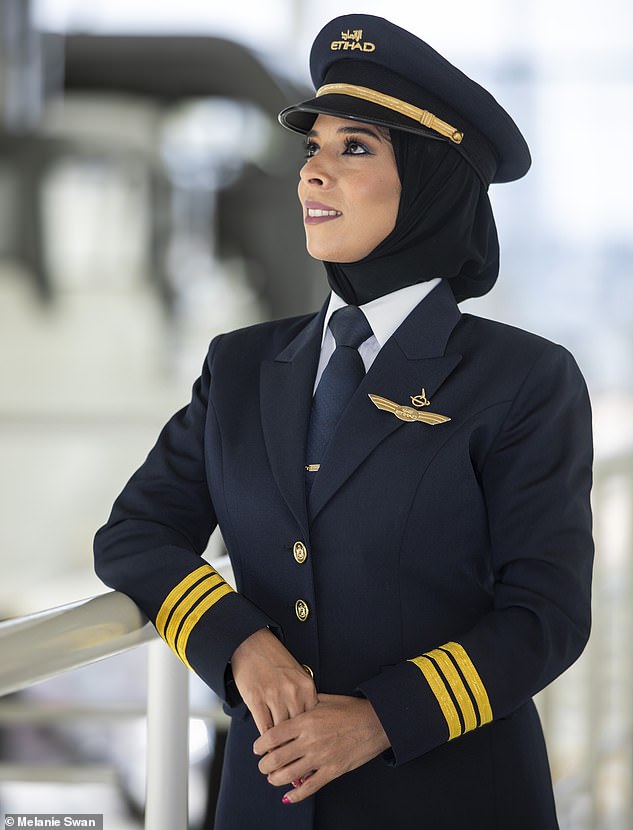 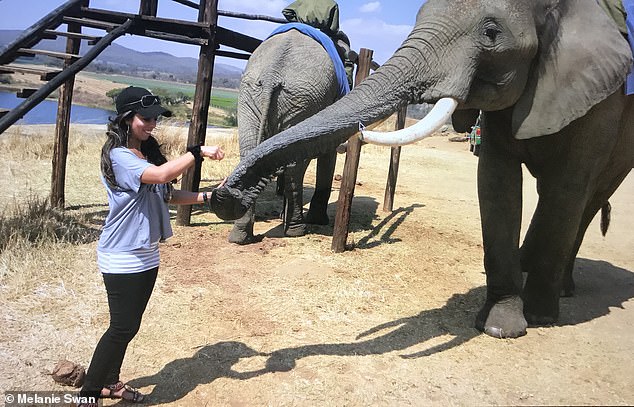 She has even inspired her sister Rasha, 33, to join the world of flying, leaving her job of many years in banking, to take to the skies with Etihad, eight years ago.

She too has felt the continued challenges of the career as an Arab woman and is aware, that each of them, has a vital role to play.

She explained: ‘As an Arabic woman, in general, I can see whenever I land in a country, people are surprised when they see me.

‘I think some cultures or countries think we as a society are way behind and women only stay home to raise their children. When they approach me, I speak to them about how we live and how our country supports women.

‘When they learn that there are many women occupying very important positions in the country, their preconceptions about our culture start to change and they express interest in learning more about us.’

Huda says the tough years have been worth it, UAE society is now one of the most forward thinking in the region when it comes to women’s employment. 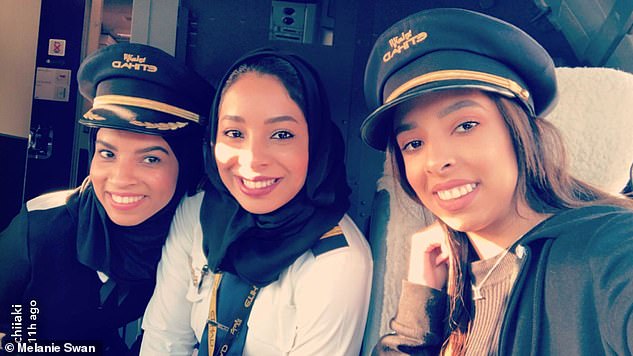 Becoming a pilot also inspired her sister Rasha, 33, to join her. Rasha is pictured here with their two youngest sisters shortly after making a landing

The ruler of Dubai alone, Sheikh Mohammed Bin Rashid, says around 85 per cent of his office is female.

‘It has had a profound effect across the board,’ she says proudly. ‘Women are now in professions we never even dreamt of, as judges in courts, in the navy, as tram drivers.’

The UAE remains the region’s leader, with many Emirati women across Emirates, Etihad (13) and Air Arabia (based in the northern emirate of Sharjah), though Oman and Saudi Arabia are also now pioneering the employment of its women as pilots too.

The World Economic Forum’s 2018 Global Gender Gap report ranked the UAE in the Middle East and North Africa’s top three countries for its support to women across sectors from government to business and military, women supported by the Constitution’s granting them the same legal rights as men, including equal pay for pilots.

Glassdoor has pilots as number one in the top 15 careers with the biggest pay gaps with Ryanair’s a massive 72 per cent between men and women, and British Airways, 10 per cent.

But with Etihad’s pilots granted equal pay, she is fortunate to have had the support to grow and inspire others to follow.

‘There is definitely work to be done internationally regarding parity,’ Huda says. ‘I hope I live to see that happen.’

Trump regrets not axing James Comey right away
Saudi Arabia vows retaliation if punished over missing...
The memoirs of the late DENIS NORDEN reveal his own life was as funny as his show
New asthma drug helps sufferer who couldn't walk up stairs to climb Ben Nevis
Mentally-ill Briton admits killing his wealthy mother
Prince Andrew should talk to the FBI under oath about friendship with Jeffrey Epstein, lawyer says
Coronavirus crisis: Wetherspoons boss insists his bars WILL stay open
Check her out! Princess Charlotte dons sold-out Zara houndstooth dress with £12 leggings