Supreme Court judge Baroness Hale was last night accused of betraying her anti-Boris bias amid a growing political storm over comments she made mocking the Prime Minister.

The judge stunned the legal and political worlds two weeks ago with her brutal slapdown of Mr Johnson’s bid to suspend Parliament for five weeks, rendering the prorogation granted to him by the Queen illegal.

At the time she insisted she was above politics and only focused on the law. 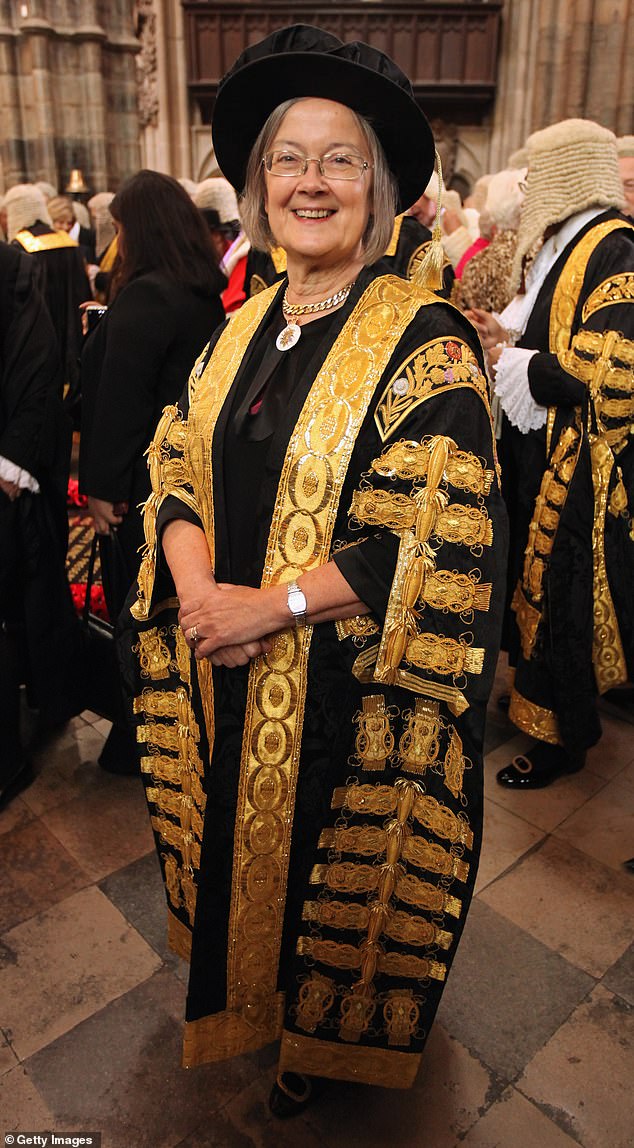 However, an appearance on Friday at the Association of State Girls’ Schools annual leadership conference in Central London plunged her to the centre of a political furore.

Standing in front of a backdrop that read ‘Spider woman takes down Hulk’, Baroness Hale used Mr Johnson’s controversial recent comments about David Cameron to greet the audience with a cry of, ‘Let’s hear it for the girly swots’.

Lady Hale’s spider-shaped brooch that she wore to deliver her withering legal demolition of the Government has become a symbol of defiance against Mr Johnson, and the PM’s interview with The Mail on Sunday in which he compared himself to the Hulk has become common parlance in Westminster.

Following the appearance, former Tory leader Iain Duncan Smith said: ‘It was quite clear what she was doing – she was revelling in her recent judgment and she’s opened herself to the question, “Who judges the judges?”‘

On Friday night, the Supreme Court media team insisted Baroness Hale was given no prior warning of the stage’s backdrop, but doubled down on the barbed comments.

‘Lady Hale said a few words before leaders of girls’ state schools and was glad to declare support for girly swots in that company,’ her spokesman said. 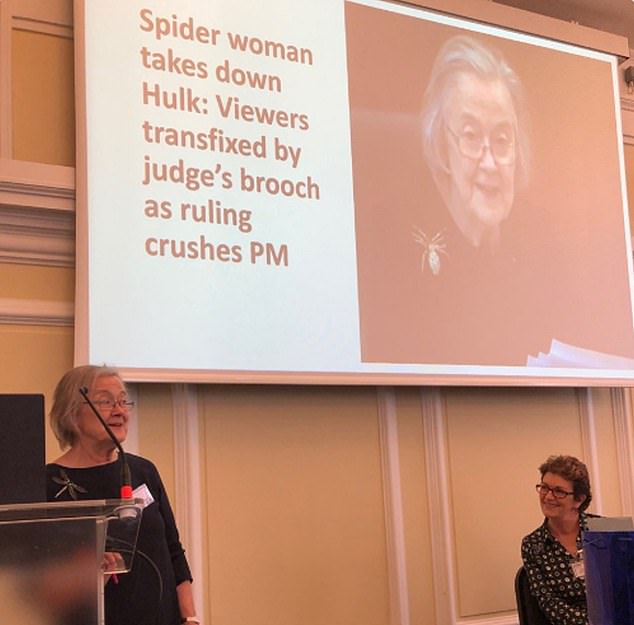 But there was mounting pressure yesterday as MPs demanded the President of the Supreme Court herself explain the remarks, or risk politicising her role further. Former Commons Deputy Speaker Nigel Evans told The Mail on Sunday that her response was ‘not good enough’.

He hit out: ‘Baroness Hale could have immediately said at the time, “I do not support that set-up and I am not someone who can enter the political field to denigrate the Prime Minister.” But she did not, instead she just went along with it, cracking jokes.’

The senior Tory added: ‘It is not good enough that she did not call it out and stress her independence. Baroness Hale must not only be impartial but at all times appear to be impartial.’

In a separate development yesterday, close connections emerged between the top judge and Labour’s Shadow Attorney General Shami Chakrabarti, who claims: ‘I’ve spent a lot of my life being inspired by older role models like Brenda Hale.’

The judgment to reverse Boris Johnson’s prorogation of Parliament was celebrated by many Labour MPs for turning attention away from the party’s infighting at their annual conference.

Appearing at a Labour Lawyers fringe event, Baroness Chakrabarti spoke highly of her fellow peeress, declaring: ‘All Hail to Brenda Hale!’ in response to the Court’s judgment that morning.

Despite being named as a Labour peer in August 2016, Baroness Chakrabarti has still appeared at at least two events alongside Hale, who became Supreme Court President the following year.

They spoke together at an LSE event in February 2018 to celebrate female enfranchisement. Baroness Hale referred to Chakrabarti as a ‘sensible woman’ from the podium.

The pair appeared again at a Justice fundraising event in June.

No mention of this was made when, three months later, Chakrabarti was one of those who submitted evidence to oppose Boris Johnson’s plans to prorogue Parliament.

However links between the two began years earlier when Chakrabarti was serving as director of the Liberty pressure group from 2003 to 2016.

The two appear to have met regularly at events such as Liberty’s Human Rights Awards in 2011 and the opening of the Lady Hale Building at the University of Salford in 2010.

In her 2014 book On Liberty, Chakrabarti praised Hale as ‘an acute legal mind’ who possesses ‘considerable human understanding’ before naming her as one of the three women who inspired her career two years later.

In July 2016, she told The Times: ‘The great legal women who inspired my career were Helena Kennedy, Juliet Wheldon and Baroness Hale.’

Last night, a Labour source insisted Baroness Chakrabarti was merely an admirer of a fellow female in the legal world, but legal sources said the pair were ‘great pals’.