He’s been enjoying his retirement from competitive athletics for the past two years.

And certainly appeared to be having fun as he donned lederhosen for a night of fun at Oktoberfest in Munich on Friday night.

The sprinter, 33, who is the fastest man of all-time over 100 and 200 metres, was seen grinning as he posed for selfies and drank a stein of beer. 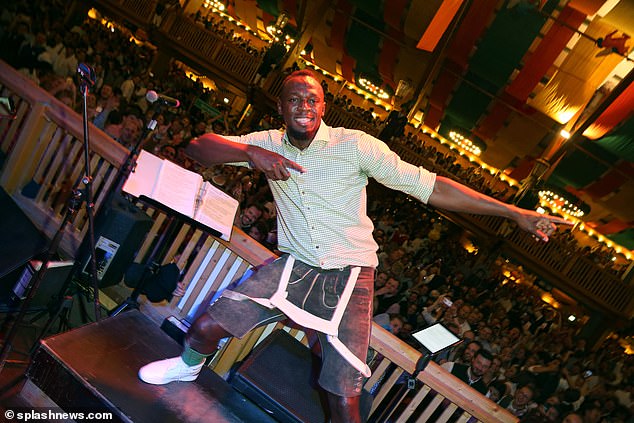 Strike a pose: Usain Bolt, 33, jumped on stage to show off his signature Lightening Bolt pose while enjoying a night at an Oktoberfest party in Munich on Friday night

Usain wore a green and white checked shirt for the night out which he paired with a traditional pair of lederhosen.

He completed the look with a pair of bright white trainers and some green socks, in a darker colour to his shirt.

The athlete spoke with several fans who were also dressed in Bavarian clothing and excited to see him among the hundreds of people in the beer tent. 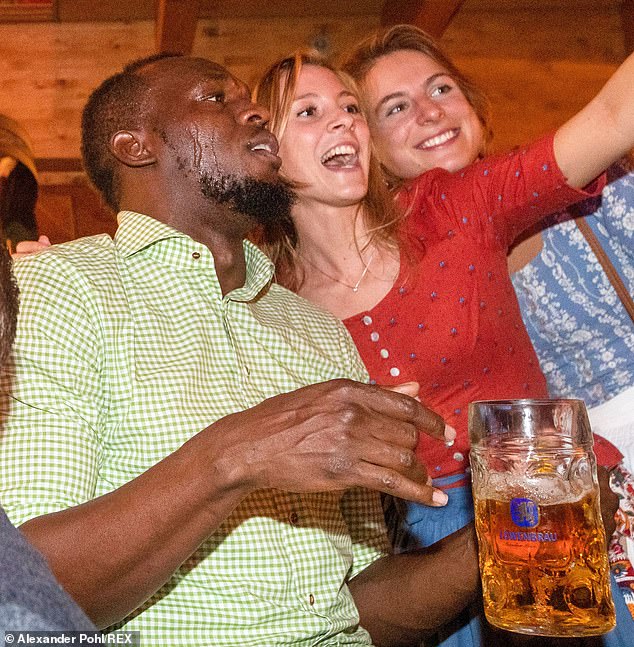 Smile: Some women dressed in traditional Bavarian outfits made sure to get a selfie with the sprinter who donned a green and white shirt at the event 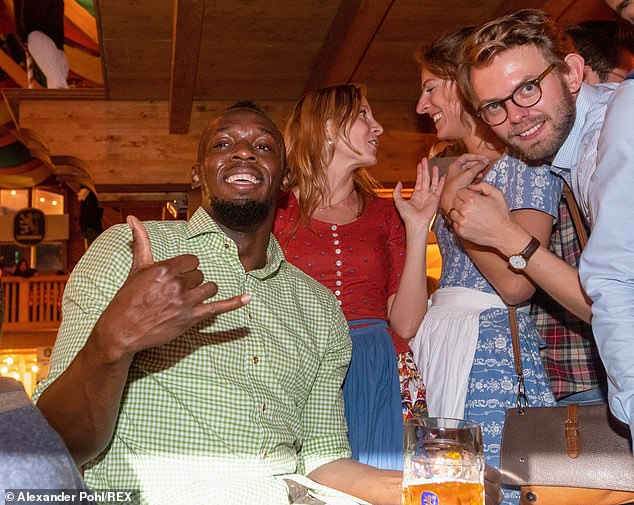 Beer buddies: Usain smiled for the cameras as another man leaned in for a chat at the beer tent

He even jumped on stage to show off his signature Lightening Bolt move, much to the crowds delight.

On Wednesday Usain also enjoyed a night of beer-filled fun with his pals, including team doctor Hans Wilhelm Mueller-Wohlfahrt.

The pair have retained a close friendship after working together throughout Usain’s glittering athletics career. 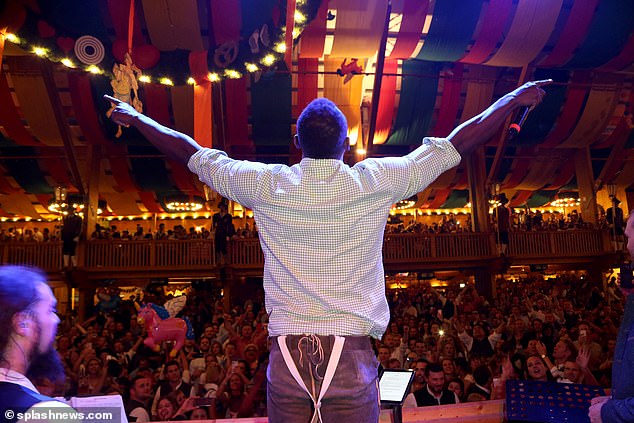 Crowd pleaser: The athlete got into the spirit by wearing lederhosen and putting his arms up for the hundreds of people at Oktoberfest 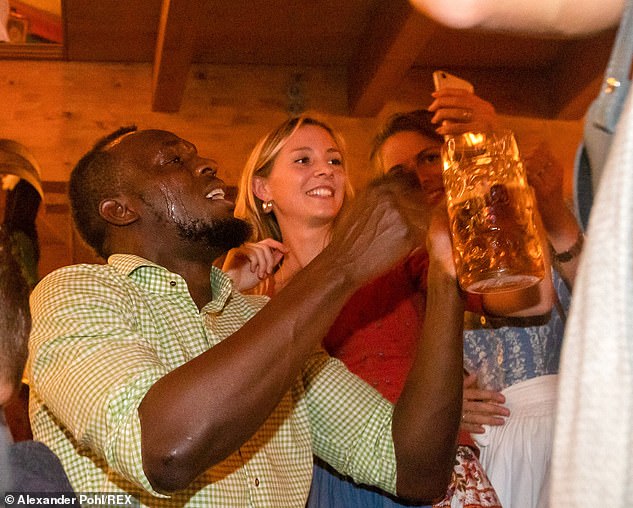 Usain credited the doctor, who also works with Germany’s national team, for fixing his persistent back and hamstring problems from the peak of his career.

Despite being based in Jamaica, Bolt had that much faith in the physical expert that he routinely flew to Germany to receive treatment.

Mueller-Wohlfahrt is famous for using unconventional techniques to treat injuries, such as injecting calves’ blood, honey and extracts from crests of cockerels into his patients. 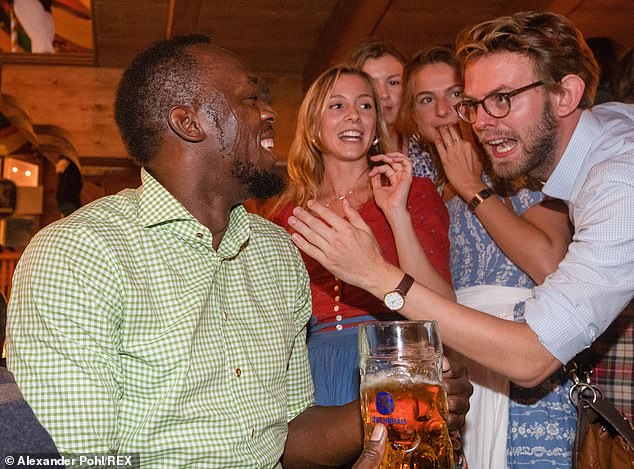 Having a laugh: The sprinter looked entertained when this man spoke to him during the event 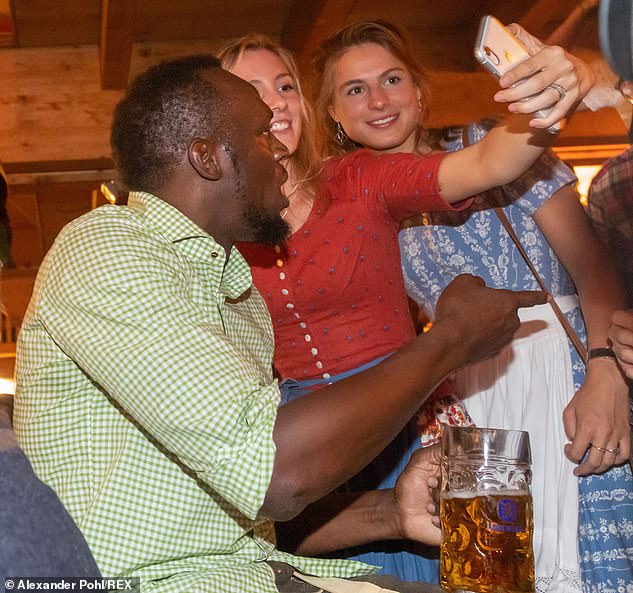 Let’s take a selfie: Usain held onto his stein of beer as two women took a selfie with him

The Jamaican sprinter cut a dapper figure in a bright white ensemble as he strolled with his other half, who dazzled in a fringed red outfit.

The eight-time Olympic medalist shielded his eyes with a pair of dark, rounded sunglasses, and added a touch of bling with several gold chains.

Last year, the former Olympian travelled to Australia where he tried out for soccer team the Central Coast Mariners.

And while that didn’t turn out to be successful, Usain has revealed that he wouldn’t trade his experience for anything as he lost his ‘motivation’ for the track.

He told BW Magazine in November: ‘People always say to me, “You could do four Olympics”, and I’m sure I can. I know that at the level I am, if I train I could do it. But the level of training I would have to put in, I don’t have the drive to do it.’ 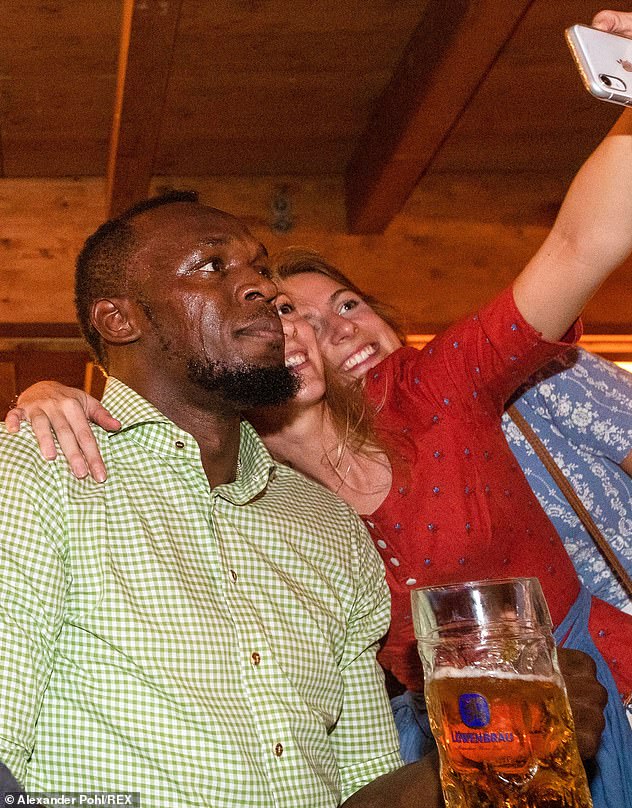 What a night: Usain embraced the event and donned traditional attire and drank German beer