A Chicago gangster has been found guilty of shooting dead the nine-year-old son of a rival gang member after luring him into an alley.

It took the jury for Dwright Boone-Doty, 25, just three hours of deliberation before reaching their guilty verdict.

Boone-Doty had been on trial with Corey Morgan, 31, for who the jury have not yet reached a verdict.

After six hours of deliberation on Thursday, the jury was sequestered overnight and set to continue on Friday morning, according to . 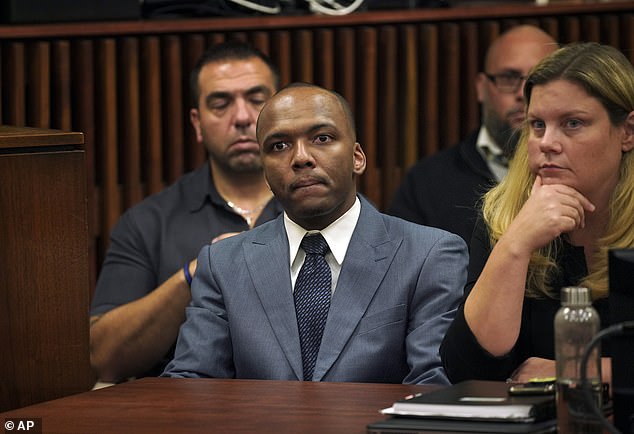 Dwight Boone-Doty listens to closing arguements at his trial for the murder of 9-year-old Tyshawn Lee at the Leighton Criminal Court Building on Thursday, October 3, above and below 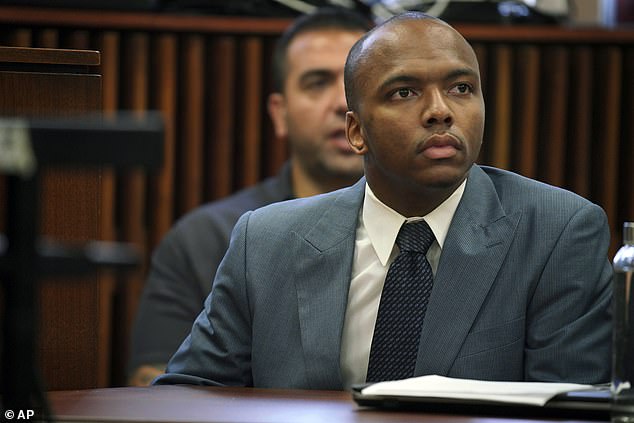 It took the jury for Dwright Boone-Doty, 25, (pictured) just three hours of deliberation before reaching their guilty verdict 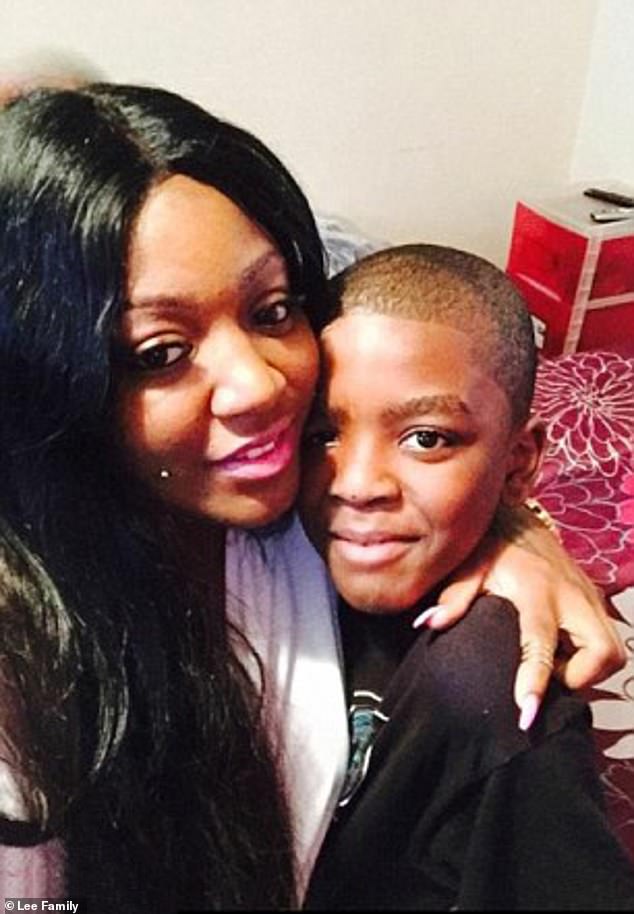 On the day of his killing, Tyshawn (pictured with his mother) was still wearing his school uniform when he headed to a park to play basketball

‘While we await the second verdict, we are pleased with the first outcome of this case, knowing that the individual responsible for this heinous, retaliatory attack on a young boy will be held accountable,’ Cook County State’s Attorney Kim Foxx said in a statement.

‘We hope that this verdict brings some measure of closure and peace for the family of Tyshawn Lee, whom we will never forget.’

During his trial, Boone-Doty was heard on tape talking about the November 2015 slaying of nine-year-old Tyshawn Lee.

In describing the shooting, Boone-Doty is overheard saying: ‘I’m looking at him. We walking. Bop. Hit the ground.

Prosecutors played the recording during Boone-Doty’s trial earlier this week in Cook County, Illinois, according to the .

Boone-Doty was arrested and charged along with two other men – Corey Morgan, 31, and Kevin Edwards, 26 – who allegedly helped him kill young Tyshawn.

Edwards, who drove the getaway car, has been sentenced to 25 years in prison after pleading guilty to murder.

Morgan was being tried together with Boone-Doty but with separate juries. 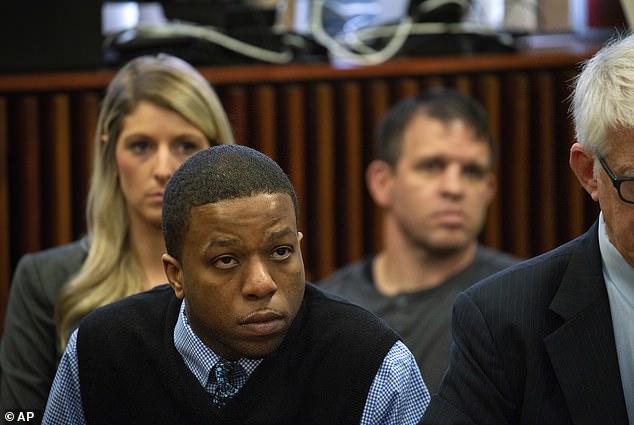 Corey Morgan listens during closing statements in his trial for the murder of Tyshawn Lee, 9, at the Leighton Criminal Court Building in Chicago on Thursda, above and below 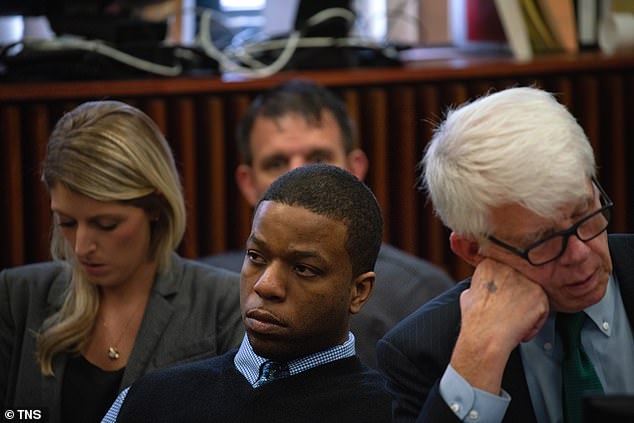 After six hours of deliberation on Thursday, Morgan’s jury was sequestered overnight and set to continue on Friday morning 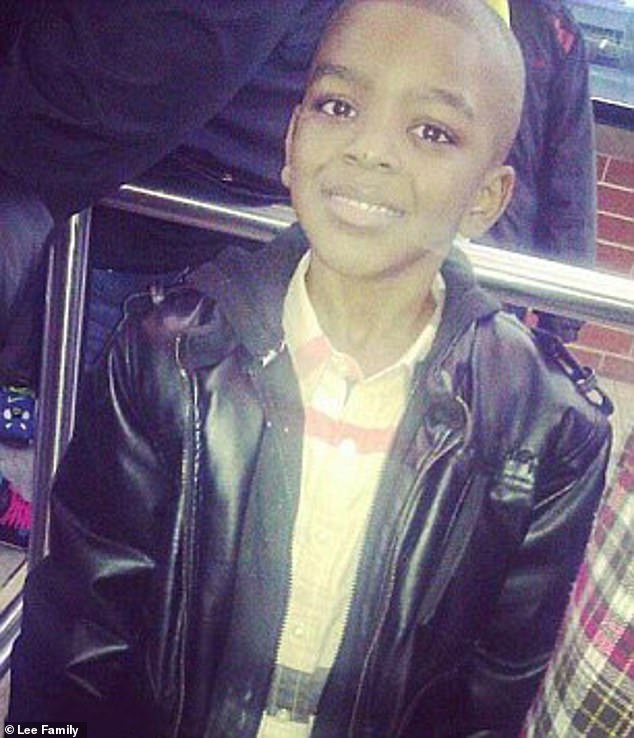 Boone-Doty was recorded in Cook County Jail conversing with Demetrius Murray, a high-ranking gang member who had been sentenced to 10 years for involvement in a separate shooting.

Boone-Doty was at the jail on an unrelated gun charge.

Murray testified in court this week that he agreed to wear a recorder in order to obtain incriminating evidence against Boone-Doty.

He said he offered to help authorities after he heard Boone-Doty’s disturbing account of how he allegedly killed the young boy.

Initially, Murray admitted that his first motivation was to get a lighter sentence on his aggravated battery case. 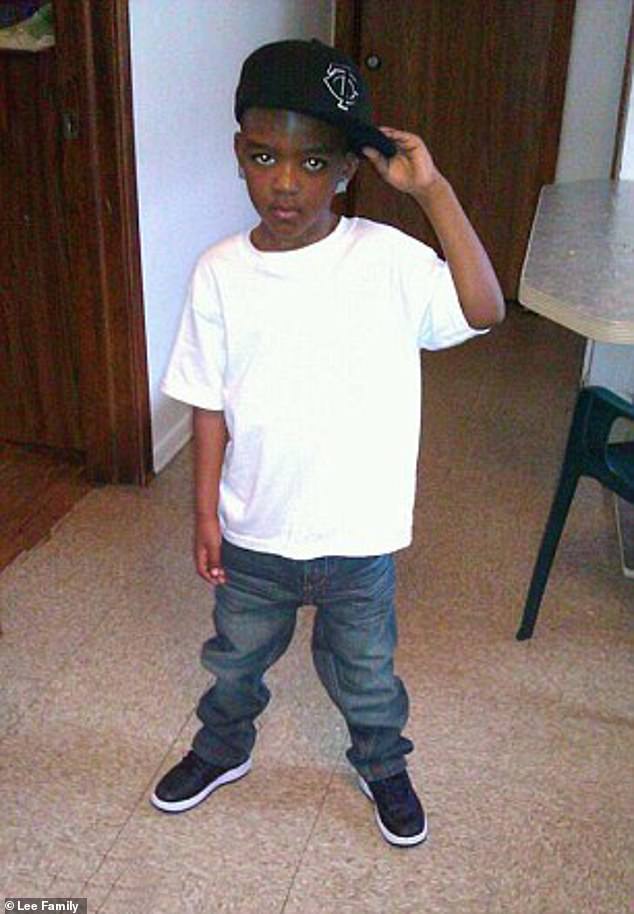 The nine-year-old (pictured) was hit three times, including once in the head and once in the back 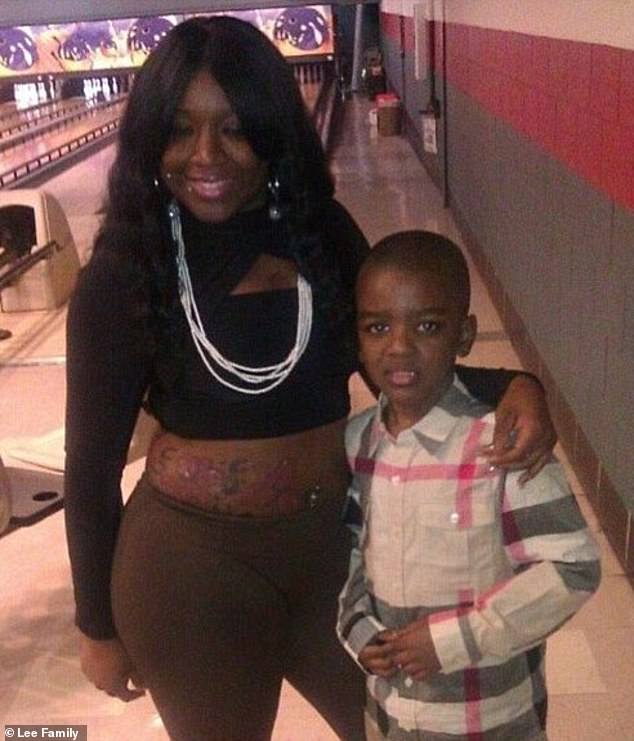 An autopsy found that the third bullet to hit Tyshawn Lee (pictured with his mother) severed his right thumb, suggesting he tried to block the bullets with his hands 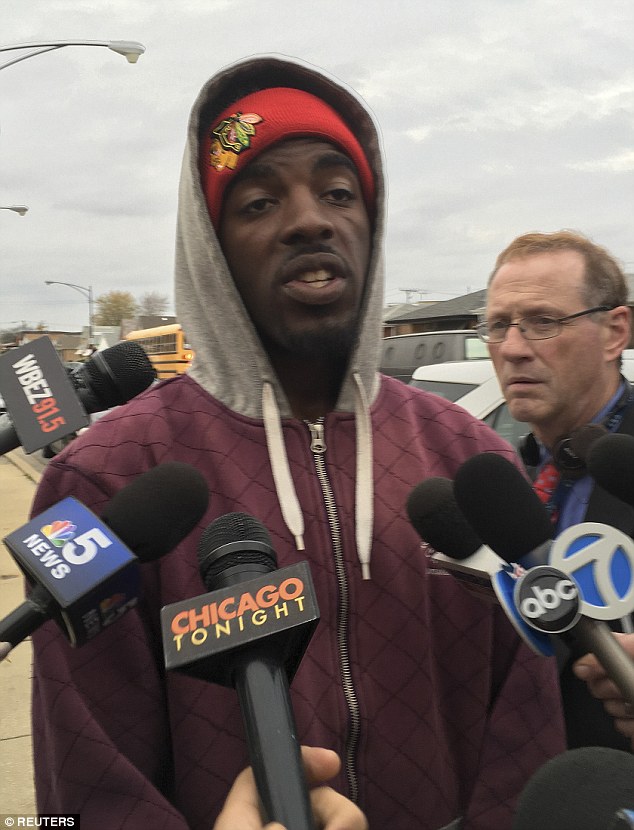 ‘My other motivation was that, like, a person that brags about things like that, it don’t add up to me,’ said Murray. ‘It ain’t right.’

Boone-Doty lured the little boy into an alley by promising him a juice box and then shot him at close range.

The third bullet severed the top of the boy’s right thumb, suggesting he tried to block the bullets with his hands, his autopsy found.

Prosecutors allege that Boone-Doty, Morgan, and Edwards – reputed members of the Black P. Stone Nation Bang Bang Gang, or BBGs – killed Tyshawn because they believed his father, Pierre Stokes, was a member of the Killa Ward faction of the Black Gangster Disciples gang responsible for a shooting that killed Morgan’s brother, 25-year-old Tracy Morgan, and wounded their mother.

In his recorded conversation, Boone-Doty is heard saying that he and his co-defendants were at Dawes Park on the afternoon of November 2, 2015.

Boone-Doty said that initially the three men who spotted Tyshawn alone in the park planned to kidnap and then torture him.

Morgan and Edwards then left, leaving Boone-Doty alone, he says in the recording.

Boone-Doty is recorded as saying he went over to Tyshawn and started dribbling his basketball as a ploy to lure him to come over to him. 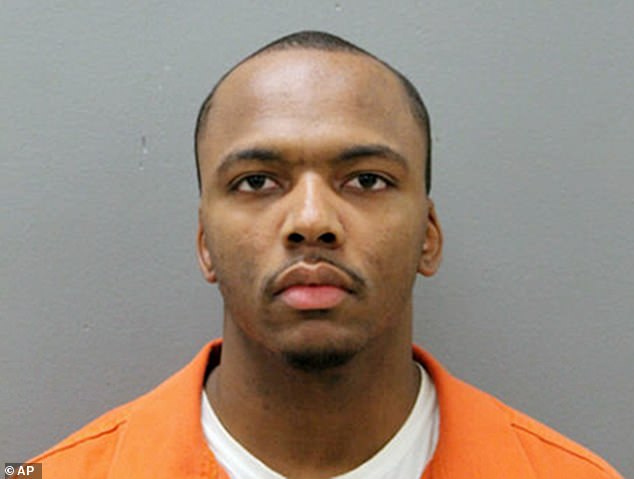 Prosecutors allege that Boone-Doty (pictured), Morgan, and Edwards – reputed members of the Black P. Stone Nation Bang Bang Gang, or BBGs – killed Tyshawn because they believed his father, Pierre Stokes, was a member of the Killa Ward faction of the Black Gangster Disciples gang responsible for a shooting that killed Morgan’s brother, 25-year-old Tracy Morgan, and wounded their mother 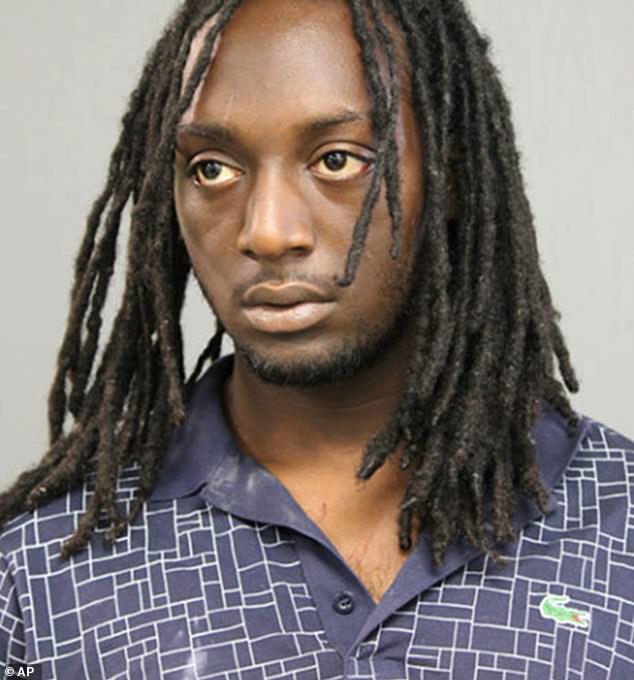 ‘I don’t know what they thinking in their head,’ Boone-Doty said.

Boone-Doty said that he offered to buy Tyshawn whatever he wanted at a local store.

He then walked with Tyshawn toward a nearby alley. He says he looked around for the SUV that he rode in with Edwards and Morgan, but couldn’t see it.

He says that at this point he shoots him in the alley.

In a subsequent conversation with Murray that was also recorded, Boone-Doty describes the gun used to kill Tyshawn – a .40-caliber handgun.

He also graphically describes how a round penetrated the boy’s skull. 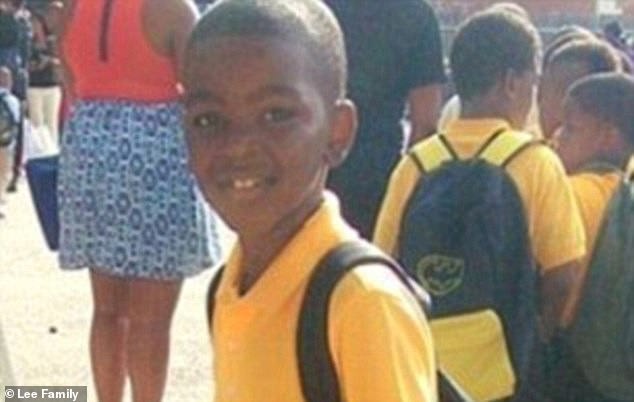 Doty is alleged to have been heard on a tape recording brag about killing Tyshawn Lee (above). The nine-year-old boy was allegedly killed execution-style by the two reputed Chicago gangsters who lured him into an alley with the promise of a juice box in a revenge plot against his father

Murray is heard on the tape asking Boone-Doty if he had any remorse about shooting a nine-year-old boy.

‘So tell me this, though. This is some real s—t. You don’t feel no type of way about killing that kid?’ Murray asked.

‘They killed my brother…that feelings (of guilt) is for s***,’ Boone-Doty said.

Boone-Doty’s lawyer, Assistant Public Defender Danita Ivory, said that her client’s statements were simply a case of exaggerated bragging in order to impress a fellow inmate.

During cross-examination of Murray, Ivory suggested that Boone-Doty was in awe of him both because of his size – 6ft5in and weighing 300 pounds – and his status as a senior gang member.

‘When certain people do things, they always add on extra stuff to it,’ Murray replied.

Closing arguments are scheduled for Thursday, with jury deliberations expected to begin either Friday or the start of next week.

Trump exec's wedding sabotaged by mistress who posted salacious images of 'affair' with the groom
Huge voter turnout is hit by problems across the country
EDEN CONFIDENTIAL: The Duchess of Cambridge 'is broody and wants to have a fourth child'
Trump says Schiff is 'human scum' and claims he had 'GREAT day' despite EU ambassador bombshells
Death toll climbs to four as severe storms leave a trail of destruction across the Southeast
Outrage after Kansas McDonald's employee scrawls vulgar comment on police officer's coffee cup
How straight-talking Dr. Anthony Fauci earned nation's trust during coronavirus outbreak
O.J. Simpson has 'not a shred of doubt' that Carole Baskin killed her husband