Sickening surveillance footage captures the moment a twisted thug tortures a cat by repeatedly hurling it into a swimming pool and beating it with a shoe as it tried to climb out.

Authorities claim Javonte Darion Alexander, 22, was seen striking the helpless animal in the face as it desperately tried to escape the pool at the City Station Apartment Homes complex in Houston, , on September 7.

The suspect allegedly held the cat’s head under the water and briefly stopped the abuse to ‘gain its trust’ before throwing it back into the pool – the reports.

Police say Alexander then carried the animal away and it appeared ‘unconscious or possibly deceased’, but the fate of the cat is currently unknown.

Javonte Darion Alexander, 22, is accused of animal cruelty after a September video showed him flinging a cat into a pool (pictured) and beating it with a shoe

He was arrested on a felony charge of animal cruelty after police received a tip-off from the Houston Society for the Prevention of Cruelty to Animals.

The chilling video released by authorities on Tuesday shows the shirtless suspect standing over the cat next to the secluded pool at night.

He grabs it by the scruff of the neck before hurling it head-first into the water. 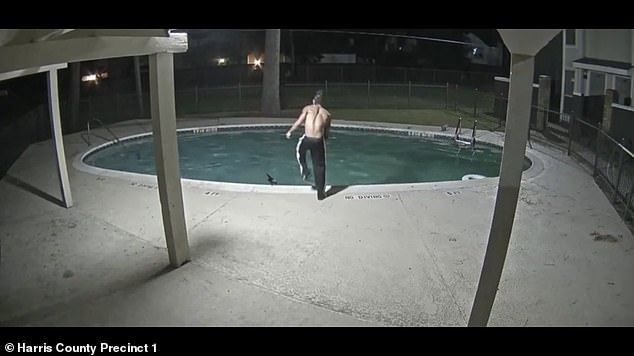 Alexander hits the cat with the shoe multiple times (pictured) while at the City Station Apartment Homes complex in Houston, Texas

As it swims around the pool edge frantically looking for a way out, the suspect is then seen slapping it away.

The cat manages to grab onto the side but the man takes off his shoe and beats it down.

The terrified animal finally manages to pull itself out but the man blocks its escape and beats the cat furiously with the shoe before throwing it back into the pool.

At this moment, the video shows Alexander hurling the defenseless cat back into the pool (pictured)

According to local media reports, a Cadillac seen entering the apartment facility with temporary plates was traced back to Alexander and he was given a three-day notice to leave his apartment due to ‘criminal activity’.

When served with the notice, he allegedly said: ‘I had problems with that cat in the past and that’s why I did what I did.’

Authorities believe Alexander may ‘be responsible for additional cases of animal cruelty.’

Alexander (left) being escorted by authorities after being arrested for animal cruelty, one month before his next court date

Constable Alan Rosen, of Harris County Precinct 1, said: ‘This video is difficult to watch. Anyone who tortures an animal should be held accountable. This cat was defenseless. Our society should not stand for such cruelty to animals.’

The third-degree charge of felony cruelty to non-livestock animals by torture is punishable by two to ten years in prison and a fine of up to $10,000, if convicted.

Alexander has posted bail at $10,000 and is due to appear in court on November 7.