The father of Botham Jean has broken down repeatedly in front of jurors as he spoke about never hearing his son’s voice again after he was murdered by Dallas cop Amber Guyger.

Bertrum Jean took to the stand on Wednesday to testify during the sentencing phase of Guyger’s trial after she was found guilty of murdering the 26-year-old in his own apartment.

He sobbed uncontrollably several times during his testimony as he spoke of his ‘sweet boy’ and coming to terms with his September 2018 death.

‘How could we have lost Botham? He tried his best to live a good honest life. He loved God, he loved everyone,’ Bertum said.

‘How could this happen to him? In hindsight what could we have done? My family is broken-hearted. How could it be possible? 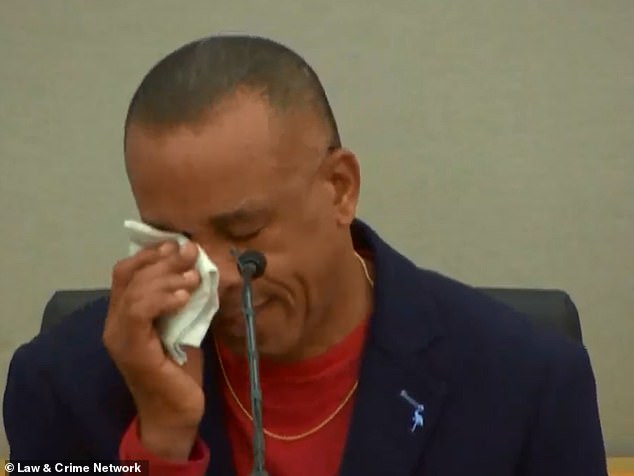 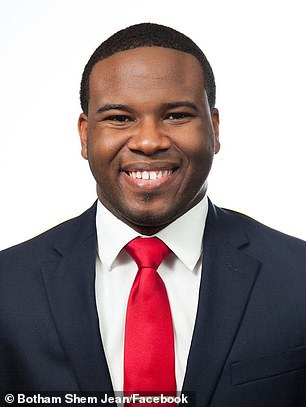 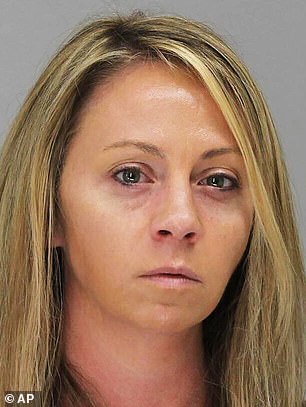 Bertrum, who lives in the Caribbean nation of St. Lucia, revealed that he still cannot bring himself to listen to videos of his son singing.

‘I’m still not ready, it hurts me that he’s not there,’ he said.

Bertrum, who is pastor in St. Lucia, also spoke of how he used to speak with his every Sunday after they had both been to church to discuss sermons.

‘My Sundays have been destroyed. Sundays are not a good day for me… because I’m not hearing his voice,’ he said.

His tearful testimony came just one day after Guyger was convicted of killing his son following an emotional six day trial.

Guyger was convicted of murder for fatally shooting Jean in September 2018 when she claims to have mistakenly entered his apartment believing it was her own.

The same jury that unanimously found the 31-year-old cop guilty will now consider her fate after hearing additional testimony and evidence during the sentencing phase.

Guyger faces a sentence that could range from five years to life in prison or be lowered to as little as two years if the jury decides the shooting was a crime of sudden passion.

During the sentencing phase, Guyger’s defense attorneys can argue that she deserves a light sentence because she acted out of sudden fear and confusion when she shot dead Jean.

The judge is expected to provide guidance on sentencing law. In Texas, the sentence for murder is from five to 99 years in prison. The state does not officially use the term first-degree murder.

Ahead of jury deliberations, Judge Tammy Kemp instructed the jury to decide if Guyger shooting dead her neighbor was reasonable under the circumstances. If not, they then had to decide between a murder or manslaughter charge.

It is not yet clear how long the punishment phase of the trial will last. 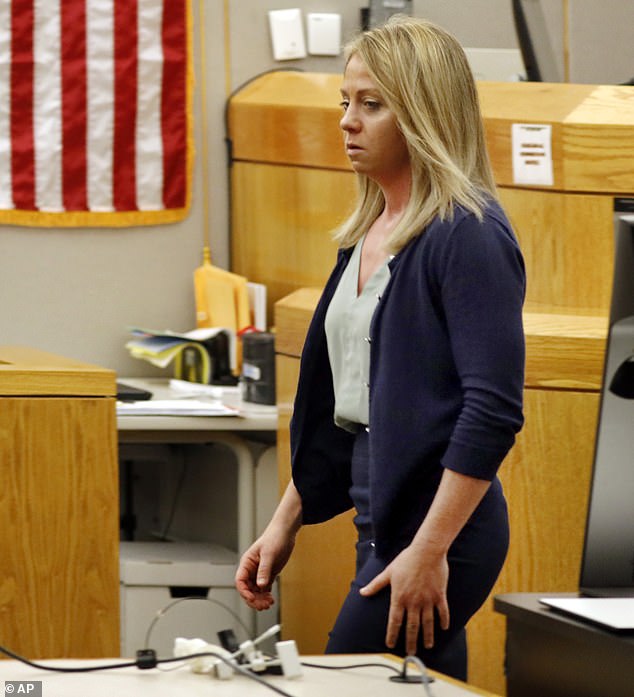 Amber Guyger, 31, was convicted of murder on Tuesday over the fatal shooting of Botham Jean in September 2018

During testimony on Tuesday, prosecutors revealed that Guyger had joked about Dr Martin Luther King Jr’s death and made critical comments about serving with black officers in text messages.

The text messages, which were accepted as evidence despite defense objections, that were submitted indicated that Guyger lacks sensitivity toward black people.

They include an exchange from January 15, 2018, when she was working security during the Dallas Martin Luther King Jr Day parade.

When asked when the parade would be over, she texted: ‘When MLK is dead… Oh, wait…’

She complained that the parade could take up to three hours and suggested that parade participants could be pushed or pepper sprayed.

Another exchange that she later deleted was with her ex-lover and police partner Martin Rivera dated March 9, 2018.

He texted her: ‘Damn I was at this area with five different black officers!!! Not racist but damn.’

She replied: ‘Not racist but just have a different way of working and it shows.’

On September 4, 2018, just days before Guyger shot Jean, she received a message suggesting that she would like a German shepherd that the messenger claimed was racist.

She texted back that she hates ‘everything and everyone but y’all’.

Some of Guyger’s social media posts were also shown in court – some of which were about guns and killing.

‘Yah I got meh a gun a shovel an gloves if I were u back da f**k up and get out of meh f**king a**,’ she commented on one social media post.

She shared another meme that read: ‘Stay low, go fast. Kill first, die last. One shot, one kill. No luck, all skill’.

Guyger also shared another meme that said: ‘People are so ungrateful. No one ever thanks me for having the patience not to kill them’. 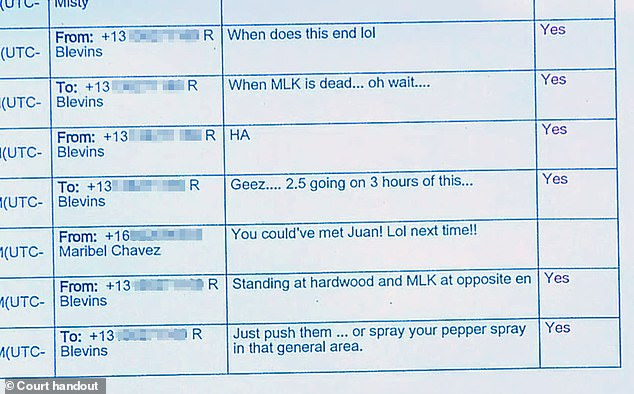 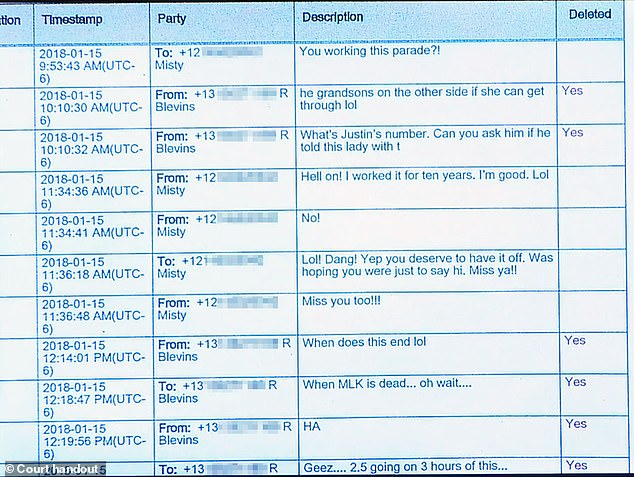 The showing of the messages was intended to reveal her lack of sensitivity toward black people, authorities said

Another exchange that she later deleted was with her ex-lover and police partner Martin Rivera dated March 9, 2018 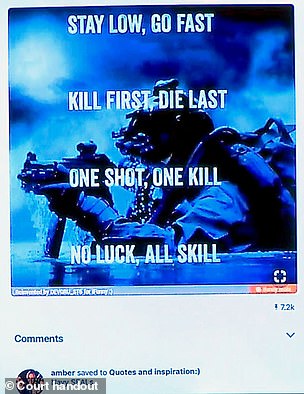 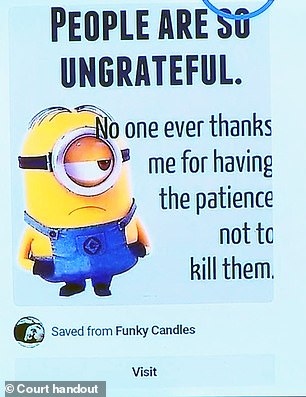 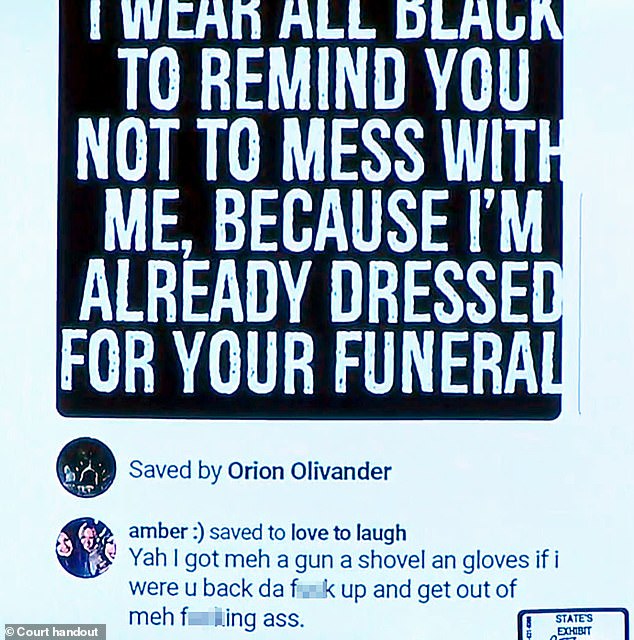 ‘Yah I got meh a gun a shovel an gloves if I were u back da f**k up and get out of meh f**king a**,’ she commented on one social media post

‘My life has not been the same’: Botham Jean’s mother and sister sob as they testify about his death

Jean’s mother, Allison Jean, was the first of his family members and friends to address the jury during the sentencing phase about how they were affected by the  killing.

Like her husband and Jean’s father, Allison broke down as she told jurors that her life hasn’t been the same since her son was shot dead by Guyger.

She said her son’s death has torn her apart.

‘I’ve been sick often. I have to try to keep the family together because everyone is pain. I’ve had to seek counselling. I try to pray just to help me get by.’

Allison said she spoke to her son for the last time the night before he was killed.

She described her son as an excellent student who led several clubs at school and said he created a choir just because he loved to sing. Allison also said her son was very religious and led mission trips back to his native St. Lucia.

Jean’s sister Alissa Findley also took to the stand, saying her mother constantly cries, her formerly ‘bubbly’ younger brother has retreated as if into a shell and that her father is ‘not the same.’

‘It’s like the light behind his eyes is off,’ Findley said.

She said her children are now afraid of police.

‘I want my brother back. I wish I could continue our last conversation and just not let him hang up the phone,’ Findley said. 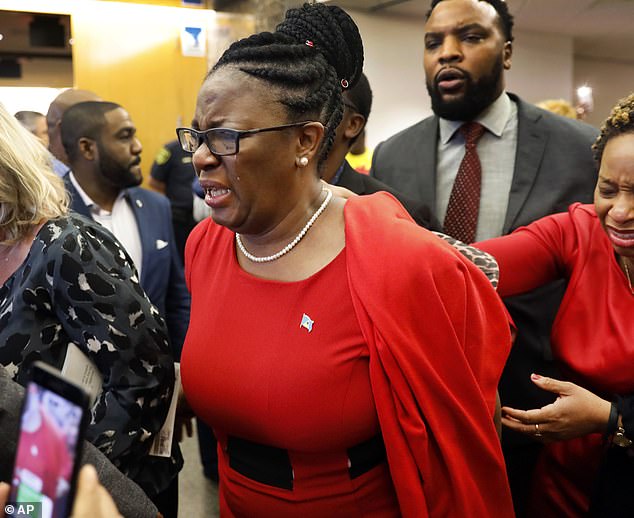 Botham Jean’s mother Allison (pictured) took the stand during the sentencing phase of Guyger’s trial on Tuesday. Allison was seen leaving the courthouse in tears after Guyger was found guilty 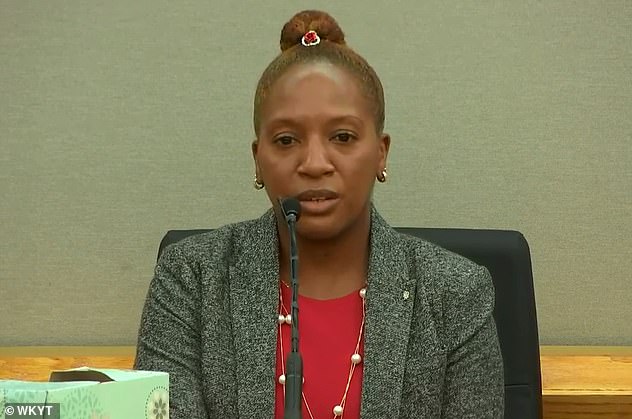 Jean’s sister Alissa Findley also took to the stand, saying her mother constantly cries and her father has become a ‘shell’ after losing their son

The basic facts of the unusual shooting were never in dispute throughout the trial.

Guyger, a four-year veteran with Dallas Police, was off duty but still in uniform when she fatally shot Jean in his home on the evening of September 6, 2018.

She told investigators that after a 13.5 hour shift she parked on the fourth floor of her apartment complex’s garage – rather than the third floor where she lived – and found the apartment’s door unlocked.

Believing she was at her own apartment and seeing a silhouette of a figure who didn’t respond to verbal commands, Guyger said she fired two shots at Jean that killed him.

Jean, a 26-year-old accountant, had been eating a bowl of ice cream on the couch before Guyger entered his home.

Prosecutors argued during the trial that Guyger should have noticed she was on the wrong floor and that she missed missed numerous signs before entering the apartment.

They suggested she was distracted by sexually explicit phone messages with her police partner and also questioned why Guyger didn’t radio in for help when she thought there was a break-in at her home instead of entering the apartment with her gun drawn.

Prosecutors pointed out that Guyger, given she was still in uniform, had a number of non-lethal items attached to her service belt at the time of the shooting, including a stun gun and pepper spray.

Her defense attorneys, however, said she fired in self-defense based on the belief that Jean was a burglar.

They argued in their closing statements on Monday that her belief she was killing an intruder in her home was entirely reasonable and the shooting was a result of ‘a series of horrible mistakes’.

In a frantic 911 call played repeatedly during the trial, Guyger said ‘I thought it was my apartment’ nearly 20 times. Her lawyers argued that the identical physical appearance of the apartment complex from floor to floor frequently led to tenants to the wrong apartments. 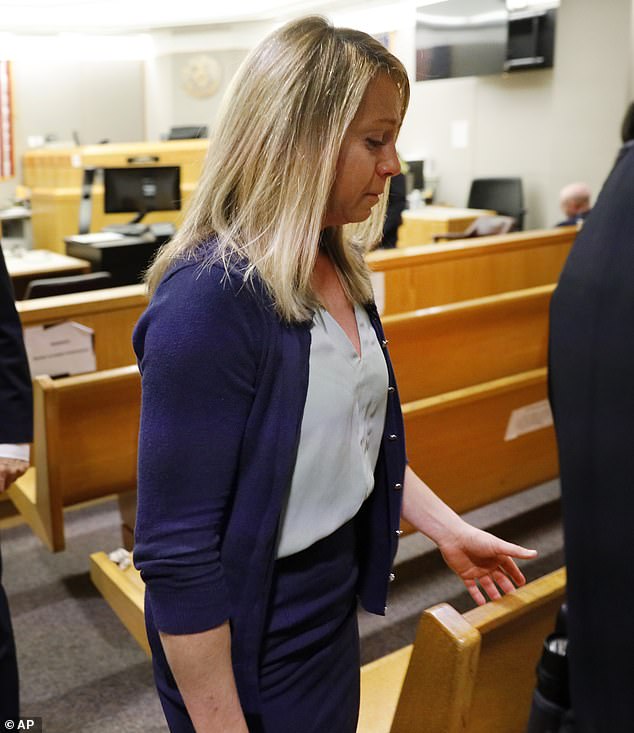 Guyger is pictured leaving the courtroom after she was found guilty of murder. The jury is expected to return on Tuesday afternoon for the punishment phase of the trial 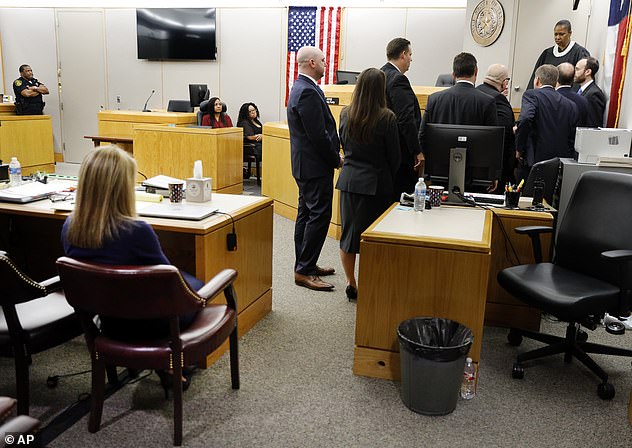 The jury that convicted Guyger was largely made up of women and people of color.

Jean, who grew up in the Caribbean island nation of St. Lucia, came to the U.S. for college and starting his career as an accountant.

His shooting drew widespread attention because of the strange circumstances and because it was one in a string of shootings of unarmed black men by white police officers.

‘A 26-year-old college-educated black man, certified public accountant, working for one of the big three accounting firms in the world … it shouldn’t take all of that for unarmed black and brown people in America to get justice,’ Benjamin Crump, one of the lawyers for Jean’s family, said at a news conference on Tuesday.

Crump said the verdict honors other people of color who were killed by police officers who were not convicted of a crime.

‘This is a huge victory, not only for the family of Botham Jean, but this is a victory for black people in America. It’s a signal that the tide is going to change here. Police officers are going to be held accountable for their actions, and we believe that will begin to change policing culture around the world,’ Merritt said.

Guyger was arrested three days after the killing and then fired from the Dallas Police Department. She was initially charged with manslaughter before a grand jury indicted her for murder.

Jurors were allowed to consider a manslaughter charge in their verdict, which can carry between two and 20 years behind bars.

The judge ruled on Monday that jurors could also consider Castle Doctrine, otherwise known as stand your ground, when considering their verdict. The law allows a person to use deadly force in protecting a home if someone is trying to forcibly enter.

Burning Man grapples with consent amid the #MeToo motion
Elderly man in Florida shot his son dead on Christmas Day and it wasn't the first time he shot him
Social media reacts to Jussie Smollett's hoax attack arrest with memes
PIERS MORGAN: Act like the Queen and quit the trash talk, Mr. President
Trump attacks Anthony Scaramucci for criticizing him in media appearances
Police shoot man on the tarmac at Las Vegas airport after he breached security door at 3:30am
White Island rescue workers search for remaining two bodies
'Bubble helmets' being used by Italian doctors 'boost survival rates'