A Washington couple who spent nearly a year preparing for their perfect fall wedding got a rather brutal surprise from Mother Nature when their special day was hit by a freak snowstorm that forced them to change all of their plans at the last minute.

Sean and Brittany Tuohy planned their fall wedding for 11 months with the aim of tying the knot outside at a specially-chosen Spokane, Washington, venue in front of their family and friends.

When Brittany first researched the date three months in advance, it was expected to be sunny and 75-degree weather. But then the snowstorm hit, effectively turning their seemingly-perfect venue into an arctic tundra. 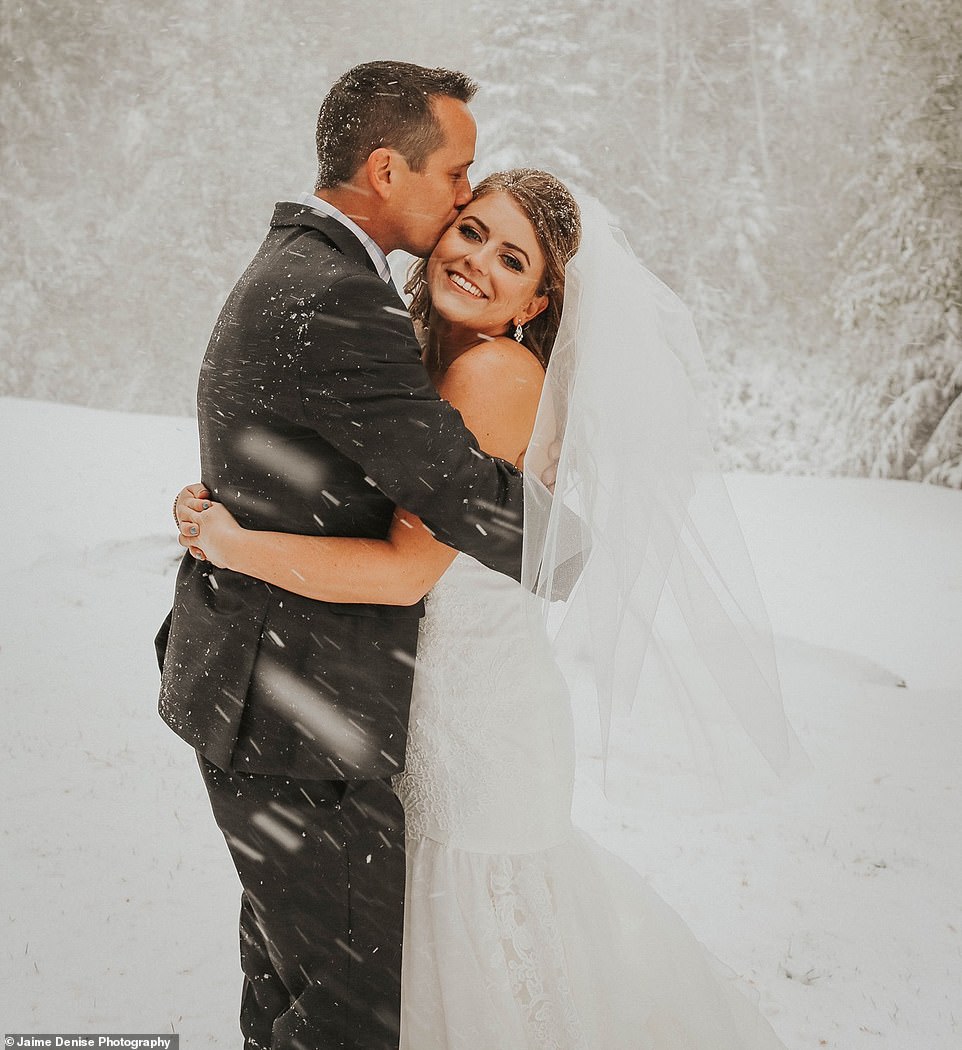 Ready to wed: Sean and Brittany Tuohy planned their fall wedding 11 months in advance at a venue in Spokane, Washington, and were expecting warm and sunny weather – only to be hit by a freak blizzard on the day 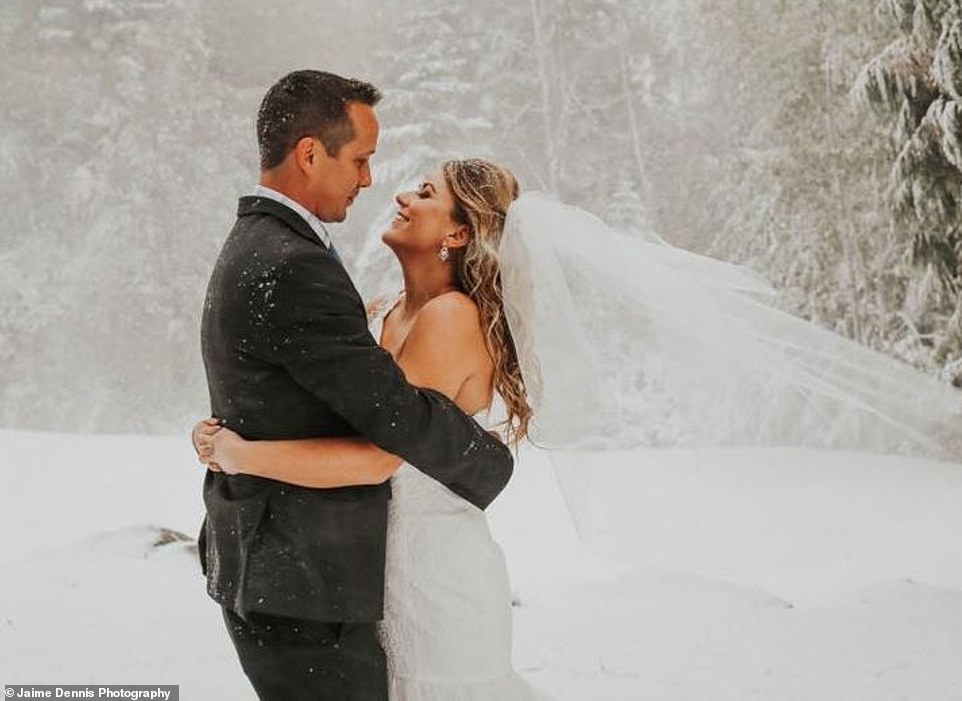 Not quite ideal: The couple hoped to get married outdoors in front of the changing leaves, but the weather had other plans 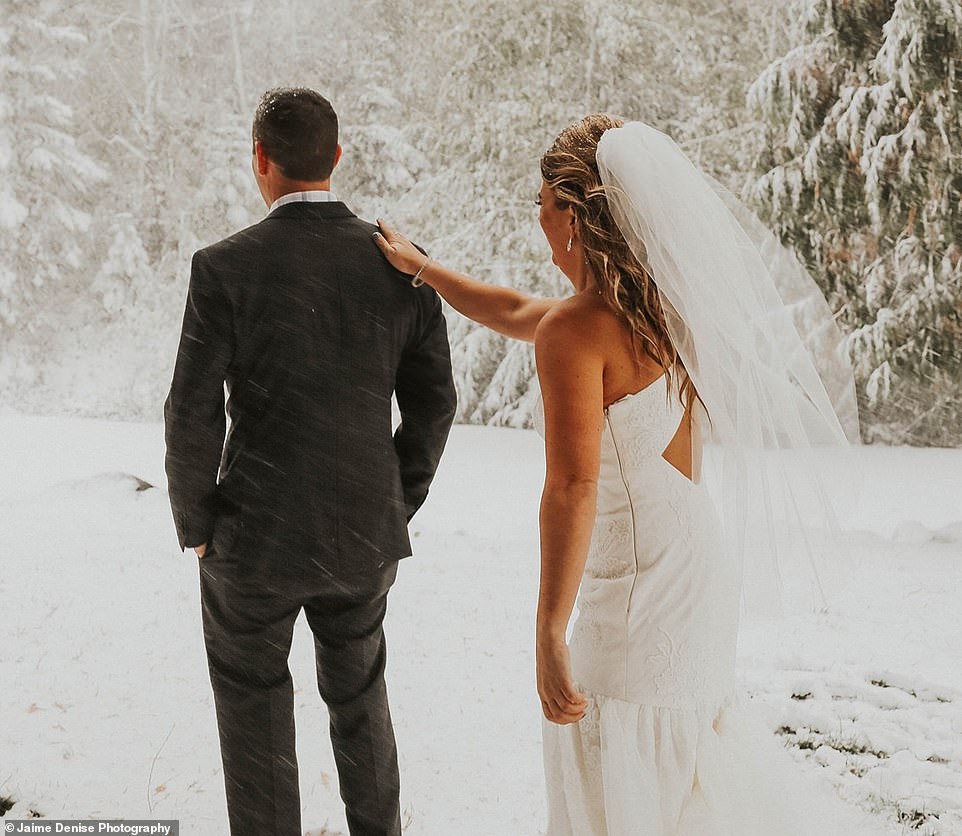 Winter wonderland: On September 28, the weather in Spokane reached blizzard conditions with an incredible snowstorm 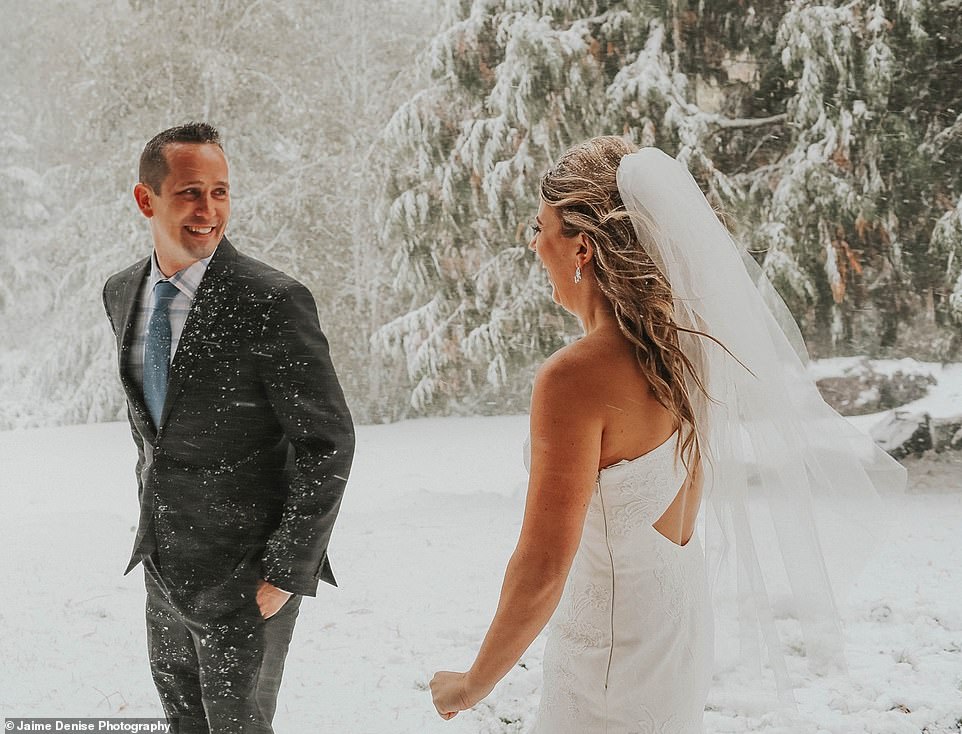 Change of plans: The couple decided to move their wedding ceremony indoors because of the snowstorm, but they still had a a quick photo shoot outside with the wedding party 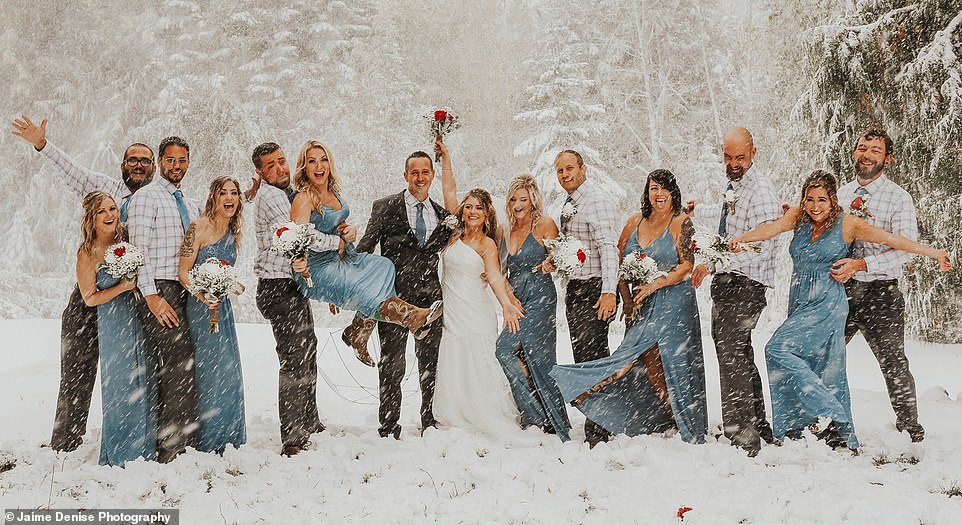 All in good fun: ‘We had to make it work for what we had,’ Sean told Fox 6 . ‘We weren’t going to let anything hold us back’

The winter storm broke records on September 28, when Brittany and Sean held their wedding, according to the because Spokane had never experienced snow fall on that date.

‘We had to make it work for what we had,’ Sean told . ‘We weren’t going to let anything hold us back.’

Although the couple intended to get married outdoors with the changing leaves in the background, this was just not an option.

Instead, they moved their wedding ceremony indoors on the stage that was originally meant for the reception.

The couple also employed photographer  to hold a a fun photo shoot with the wedding party out in the blizzard conditions.

‘These two were absolute champions changing their completely OUTDOOR wedding to a COMPLETELY INDOOR Wedding last minute… and they even let me take them outside for a few photos,’ Jamie wrote on when sharing images from the nuptials.

In the pictures, the wedding party appears all smiles as they laugh and play in the snow. 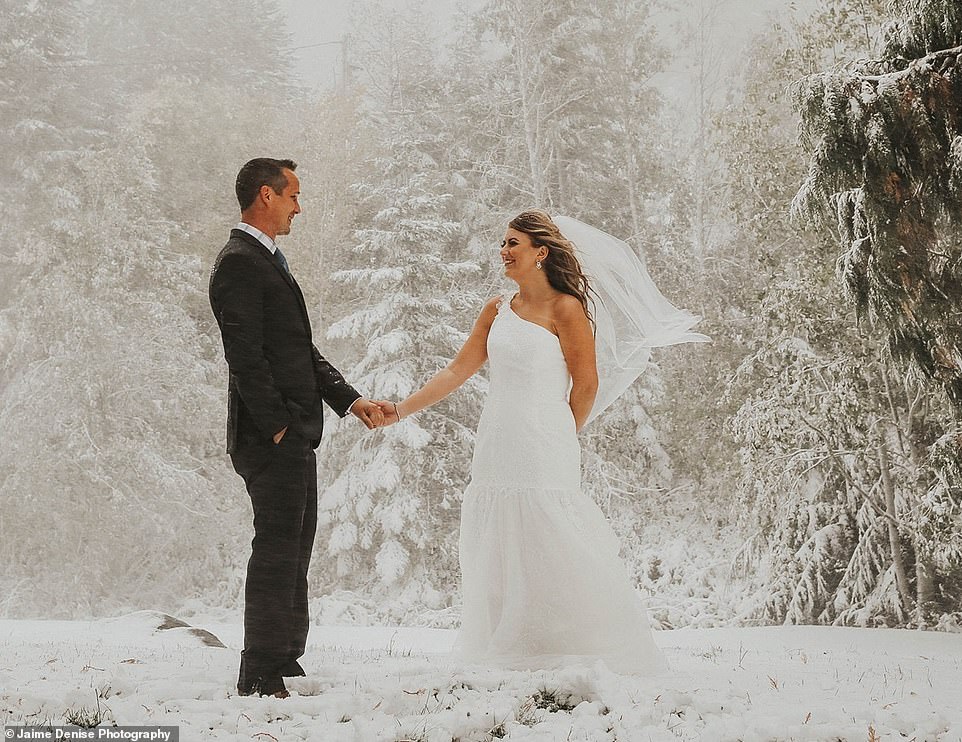 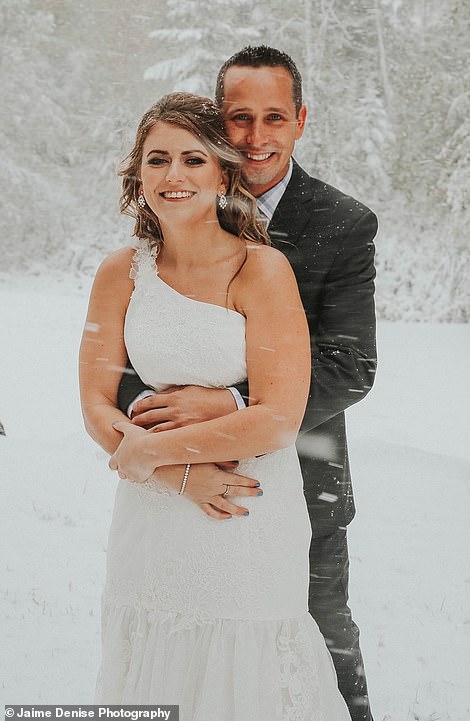 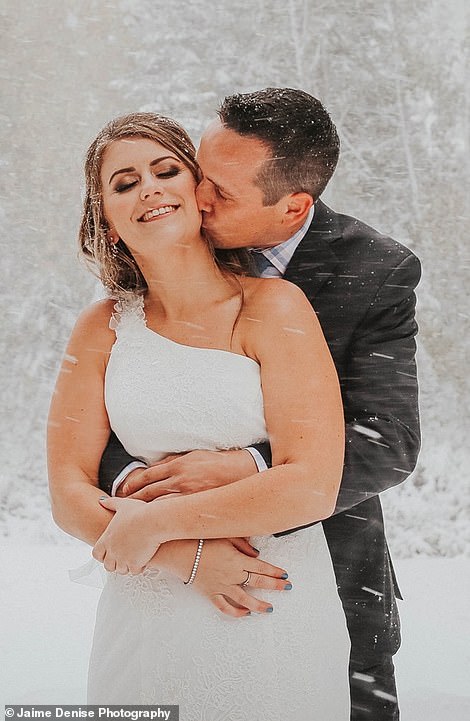 In love: The couple made the most of the situation and were able to get incredible images for their wedding day 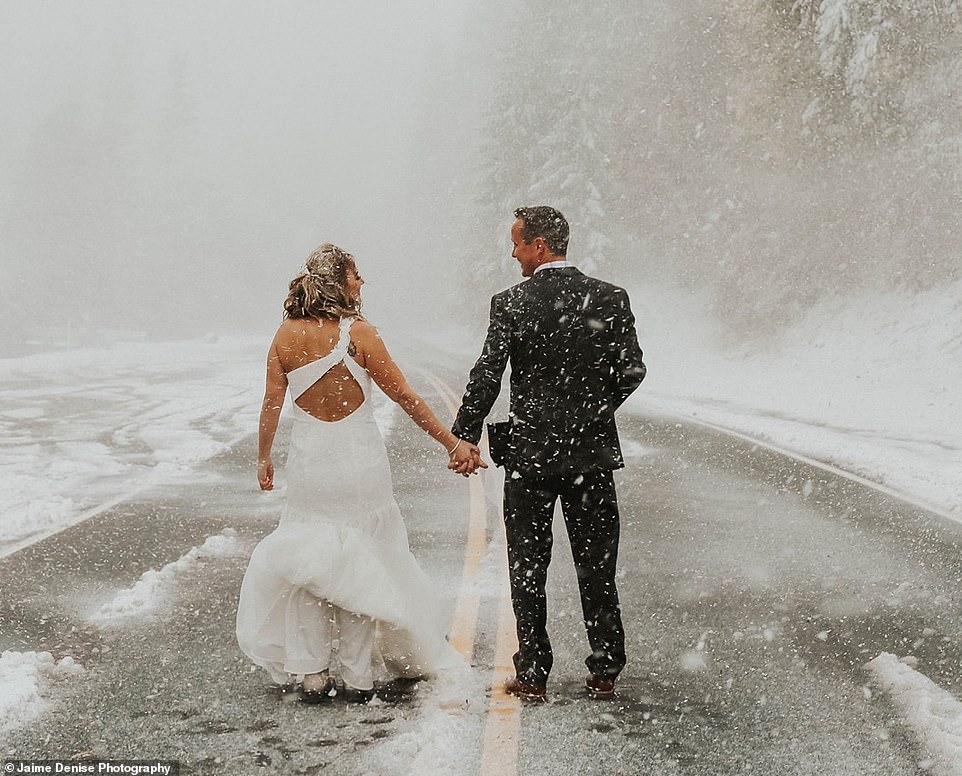 Braving the weather: The outdoor photo shoot only lasted about 10 minutes because of the weather conditions, which included brutal wind 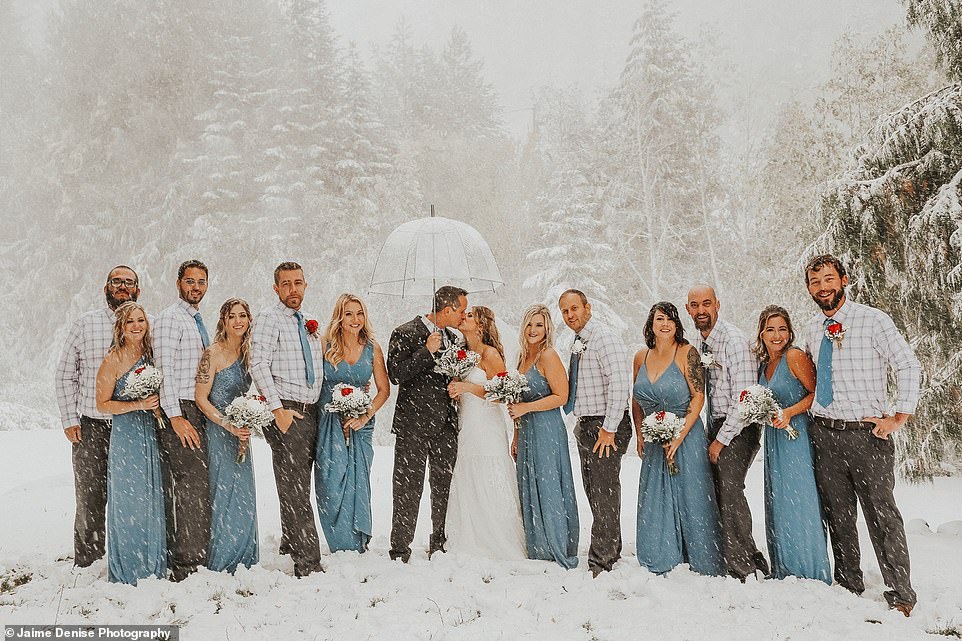 Making it work: The bride also lost her veil during the photo shoot and one bridesmaid fell face first into the snow 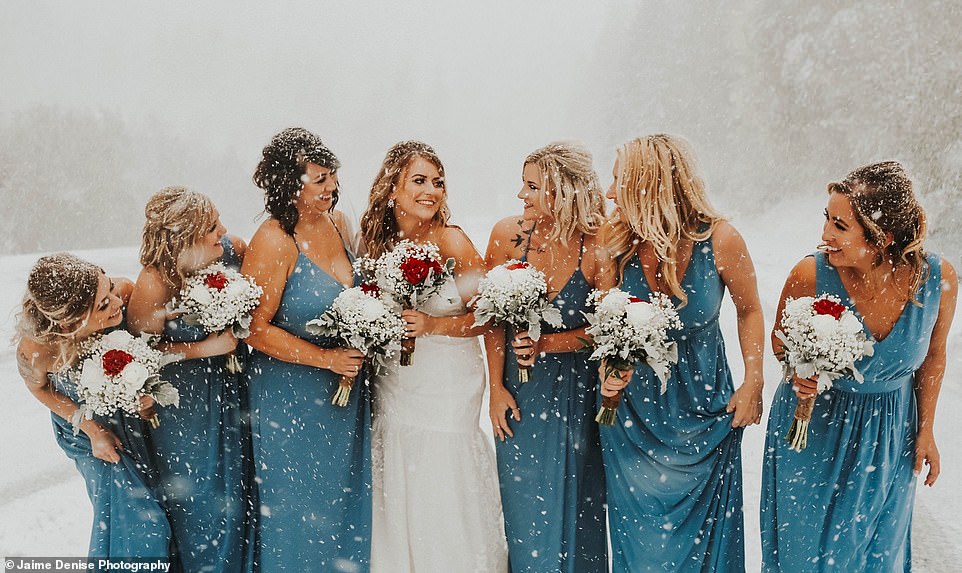 Supportive friends: But everyone appeared in high spirits while they worked to make the photo shoot work

Jamie revealed how the couple and their wedding party only stayed out in the blizzard conditions for about 10 minutes to get the shots they needed.

The wind conditions made it so the group had to go back indoors and join the rest of the reception following the quick photo shoot.

‘The snow REALLY started to get bad,’ Jamie wrote, adding: ‘THANK YOU to Brittany & Sean for having the best attitude about the uncontrollable atmosphere. You made the chaos absolutely beautiful! Your love for each other warmed all of us.’

The happy couple did not intend for a snowy photo shoot to celebrate their marriage, but it did make for beautiful shots out in the winter wonderland.

There were some hurdles, though, to shooting outdoors during the winter conditions, including the bride losing her veil and one bridesmaid falling face first into the snow.

‘It was definitely worth it,’ Brittany said. ‘There were times I told my friends I wanted a winter wedding…I didn’t plan for it, but I guess Mother Nature just knew.’ 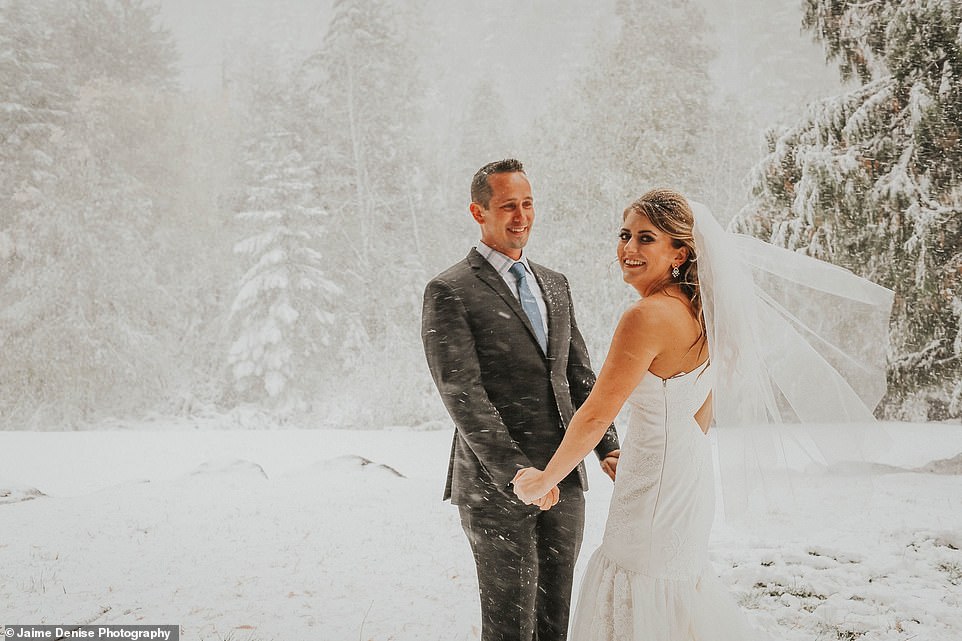 Happy couple: ‘THANK YOU to Brittany & Sean for having the best attitude about the uncontrollable atmosphere,’ Jamie wrote on Facebook when sharing the photos with her followers 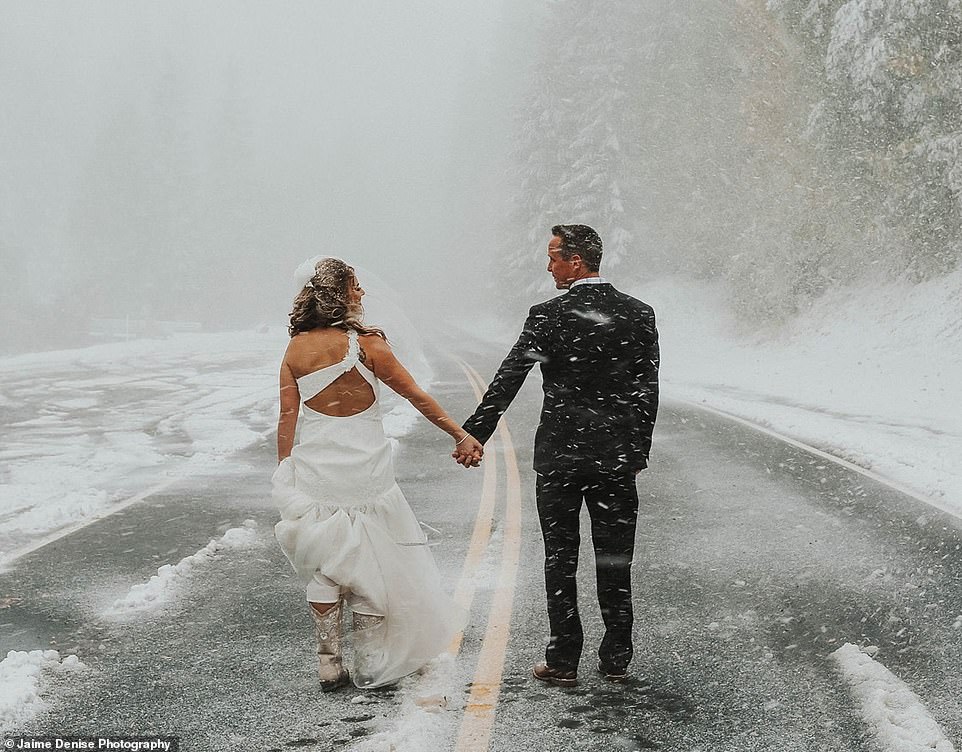 Happily ever after: The weather was not what the couple originally intended for their wedding day, but they made it work 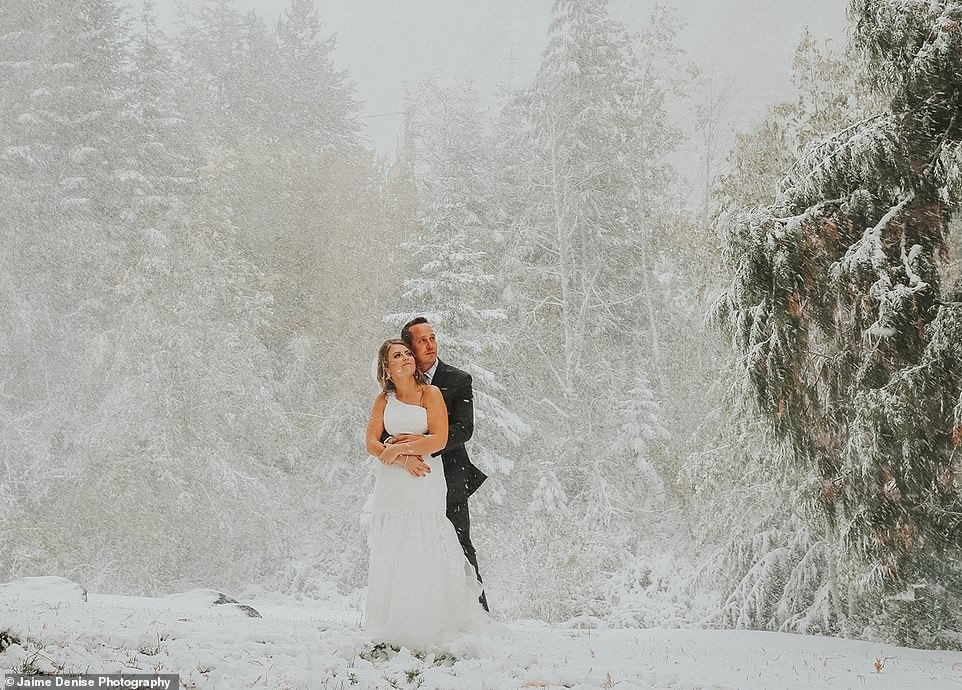 ‘It was definitely worth it,’ Brittany said. ‘There were times I told my friends I wanted a winter wedding…I didn’t plan for it, but I guess Mother Nature just knew’