A scientific study claiming that the bird population in North America has declined by some three billion in the last 50 years gives the mistaken impression that we are on the verge of a ‘bird apocalypse,’ experts say.

Researchers at Cornell University last week published a paper in the journal which found that the bird population of the United States and fell by 2.9 billion since 1970.

The decline represents a 29 per cent drop, according to the study’s authors.

But others say that the study, which was rolled out with a splashy public relations, news media, and social media campaign, may have exaggerated talk of a possible bird extinction, according to .

That’s because most of the bird population losses observed in the study are among the most abundant species on the planet rather than rare birds, researchers say. 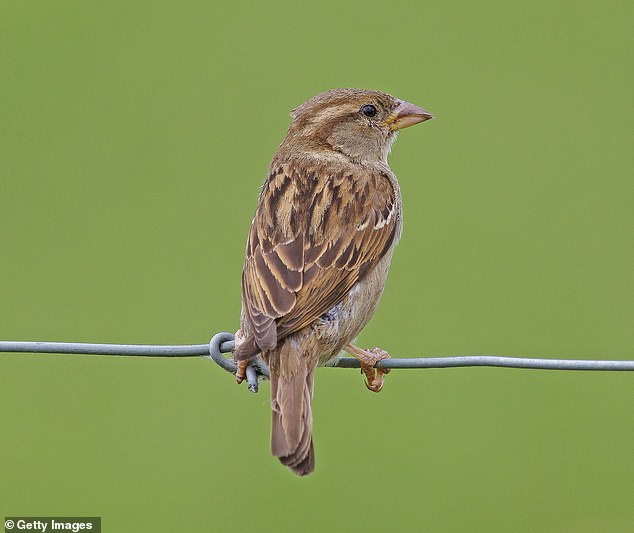 The stock image above shows a female House Sparrow perched on a wire fence. The sparrow is one species of bird whose population in North America has been in decline, according to experts

One ecologist, Brian McGill of the University of Maine, believes that while the study is largely accurate, it didn’t mention that 15 per cent of population losses were experienced by two species – the European starling and the house sparrow – that are not native to North America.

‘The irony is that land managers and conservation agencies have actually spent a lot of money to try to drive down or eliminate invasive species,’ McGill said.

McGill also says that the original bird population figures recorded in 1970 may have actually been inflated after birds migrated to farmland due to deforestation and prairie destruction.

If this is so, that means the decline mentioned in the Science study could simply be a return to an earlier baseline population that existed before the European birds arrived, according to McGill. 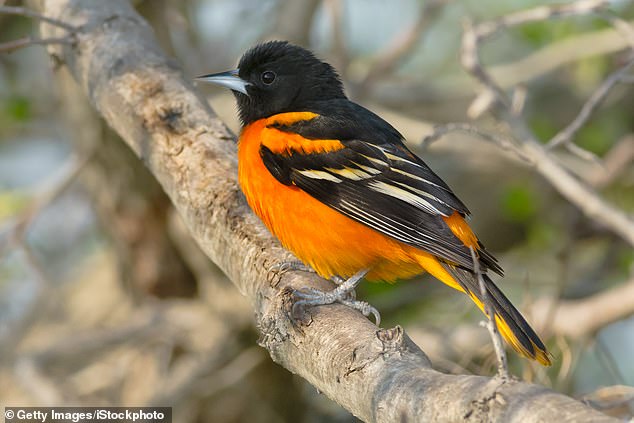 The above stock image shows a Baltimore Oriole perched on a branch. Two in five Baltimore Orioles have died since 1970, according to a study which appeared last week in the journal Science

Todd Arnold, a conservation biologist from the University of Minnesota, agreed with McGill.

He said that while he agrees about a decline in overall bird population, the study should also highlight the fact that some species saw an increase in population.

‘But, on average, the increases outweigh the declines.’

Arnold said that while experts are right to be concerned about the 40 declining species, ‘that’s not apocalyptic.’

‘It’s saying that, you know, between 5 and 10 per cent of our avifauna is in serious trouble,’ Arnold said.

‘That’s a serious message. It’s maybe not quite “Decline of the North American Avifauna”.’

Arnold said that that the need for splashy headlines and condensed findings in the journal Science likely left the public with a less nuanced view.

‘I’m pretty sure if I tried with the same analysis, and focused on the fact that I could do a really cool and sophisticated analysis based on 500-plus species, that would never get past the editor’s eye,’ he said.

‘It would have ended up somewhere. But certainly not in Science.’

The study’s lead author, Ken Rosenberg, is an applied conservation scientist at the Cornell Lab of Ornithology and the American Bird Conservancy.

He agreed that the study could have added more context and nuance, but because of space constraints ‘we have to cut 90 per cent of what we wanted to say.’

‘Those are very good points [by McGill and Arnold], and you can dive-in many, many different ways into nuances that we were not able to cover in the paper itself,’ he said.

McGill says that while the overall substance of the study is accurate, the accompanying publicity and talk of ‘apocalypse’ may frighten people into disbelieving scientists in the future. 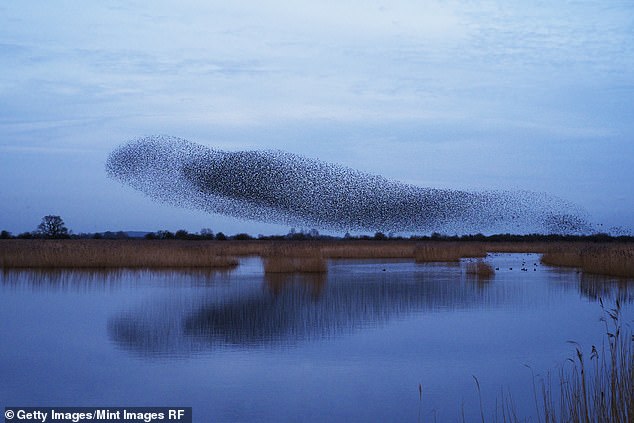 The above undated stock image shows a murmuration of starlings. Researchers say that while starlings have declined, these birds are native to Europe, not North America

‘I think it hurts the credibility of scientists.’

‘Humans are to blame’

The researchers who did the study found that people are to blame for the drop in bird populations, citing factors including widespread habitat loss and degradation, broad use of agricultural chemicals that eradicate insects vital to the diet of many birds, and even outdoor hunting by pet cats.

‘Birds are in crisis,’ said Peter Marra, director of the Georgetown Environment Initiative at Georgetown University and a co-author of the study published in the journal Science.

‘The take-home message is that our findings add to mounting evidence with other recent studies showing massive declines in insects, amphibians and other taxa, signaling a widespread ecological crisis,’ Marra added.

‘Birds are the quintessential indicators of environmental health, the canaries in the coal mine, and they’re telling us it’s urgent to take action to ensure our planet can continue to sustain wildlife and people.’

Most of the losses were not among rare species, but common ones across nearly every bird family and all habitats. 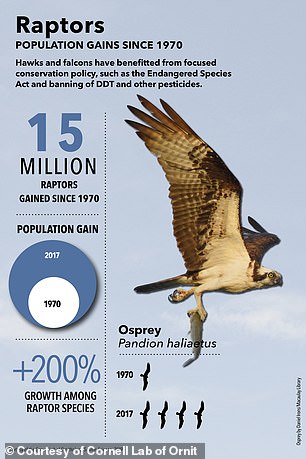 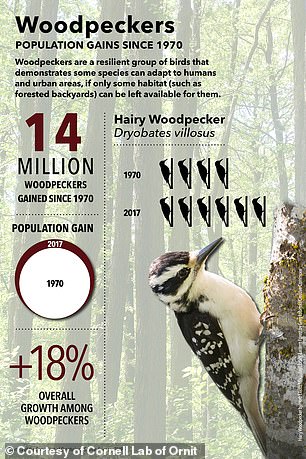 While overall the population of birds has declined in the United States and Canada, some species, like raptors (left) and woodpeckers (right), have actually seen a population increase, according to experts

Some 90 per cent of the total loss came from just 12 bird families and 19 widespread bird species such as the dark-eyed junco, common grackle and house sparrows.

Each of those species lost more than 50 million individuals.

The researchers tracked populations of 529 species using decades of bird counts taken on the ground as well as weather radar data that revealed similar declines in the volume of migratory birds.

Grassland birds were particularly hard hit, with a 53 per cent reduction in population, amid agricultural intensification.

Most shorebirds are migratory and experienced habitat degradation and destruction in many locales where they migrate.

In addition, many shorebirds breed in Arctic regions rapidly warming due to climate change.

The researchers documented a steep decline for migratory birds. They noted broad declines among birds that migrate to the tropics, where there have been devastating rates of habitat loss and degradation.

Migrating birds also face threats at their stopover sites and on their North American breeding grounds.

The researchers said other studies have documented worrisome bird population losses in other parts of the world. 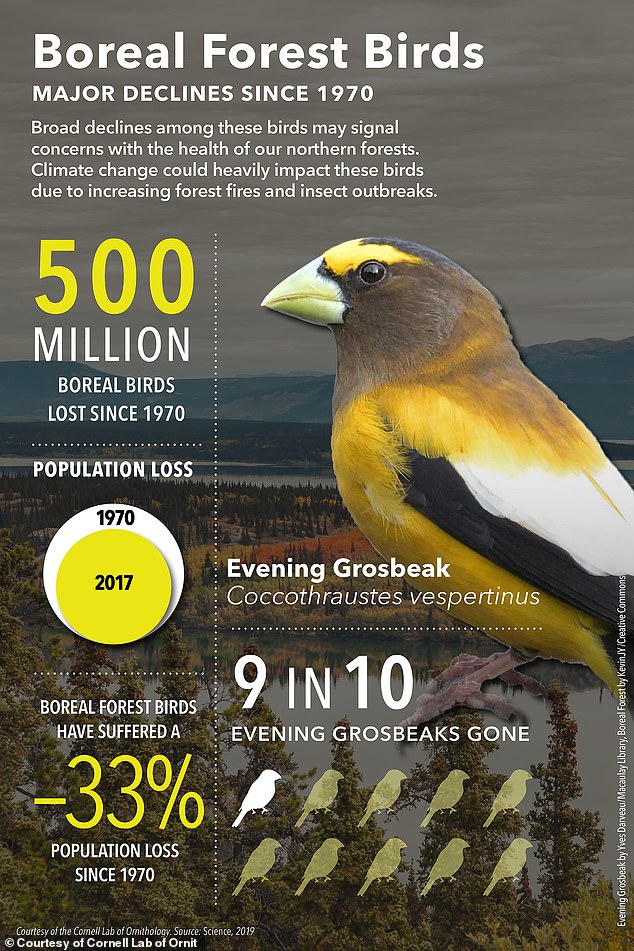 ‘Birds are a critical component of many ecosystems,’ Rosenberg said.

‘They serve as predators and prey in food webs, disperse seeds, and provide ecosystem services such as eating insect pests. When we lose large amounts of birds, we disturb the entire web of life, which we all depend upon.’

While climate change was not the major driver of the population plunge, it is likely to exacerbate the existing threats to bird populations, Rosenberg said.

The researchers said the extinction in the early 20th century of the passenger pigeon, once likely the most abundant birds on Earth numbering in the billions, showed that even abundant species can go extinct rapidly.

Some types of birds showed gains. Banning the pesticide DDT allowed for the resurgence of raptor populations including the bald eagle, the researchers said.

Waterfowl management policies including wetland protection and restoration enabled ducks and geese to thrive, they added.

‘These are important examples that show, when we choose to make changes and actively manage the threats birds face, we can positively impact bird populations,’ Rosenberg said.