bashed Sunday, calling the president ‘a corrupt human tornado’ after a week of negative media attention surrounding revelations of a July phone call he had with the Ukrainian president.

While promoting ‘The Book of Gutsy Women,’ which she wrote with her daughter Chelsea, Clinton – who often laments that she won the popular vote in 2016 – called Trump an ‘illegitimate president.’

‘He knows that there were a bunch of different reasons why the election turned out how it did,’ Clinton told CBS in a pre-recorded interview that aired Sunday morning.

Her most recent criticism of the president comes after a whistle-blower last week brought to light his allegations that during a July phone call with Ukrainian President Volodymyr Zelesnky, Trump tried to pressure the foreign leader into investigating Joe Biden and his son Hunter Biden. 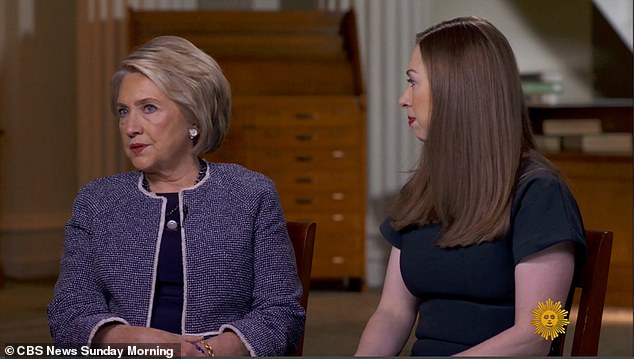 Hillary Clinton, joined by her daughter Chelsea to promote their book ‘The Book of Gutsy Women’, railed against the president, claiming that she lost the 2016 election to a ‘corrupt human tornado’ 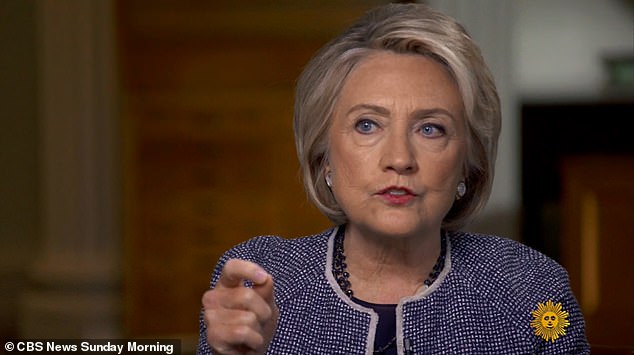 Clinton called Trump an ‘illegitimate president,’ which she often does when mentioning she won the popular vote in 2016. Her criticism comes after a particularly tumultuous week for the president

‘Given this latest revelation, which is such a blatant effort to use his presidential position to advance his personal and political interest, there should be an impeachment inquiry opened,’ she said.

House Speaker Nancy Pelosi announced Tuesday that the lower chamber was officially opening an impeachment inquiry into the president following after the whistle-blower’s allegations came to light.

‘I don’t care who you’re for in the Democratic primary or whether you’re a Republican, when the president of the United States, who has taken an oath to protect and defend the Constitution, and by that, defend the American people and their interest, uses his position to in effect extort a foreign government for his own political purposes, I think that is very much what the founders worried about in high crimes and misdemeanors,’ she continued when asked about the impeachment proceedings.

The Obama-era secretary of state said that she doesn’t ‘accept’ that Donald Trump will receive another four year.

‘I don’t believe that will happen,’ she insisted.

The former candidate’s packed media week and her renewed critique of his presidency has rumors swirling that she is looking at potentially entering thee 2020 Democratic primary race – at the same time Biden is losing clout within the party. 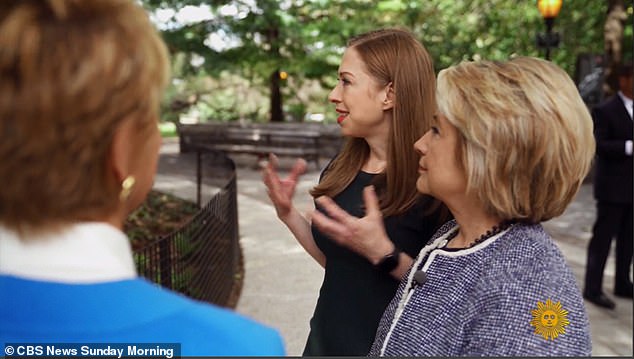 Clinton has a packed media week, and her comments that what happened in 2016 won’t happen again have sparked rumors she might launch a 2020 presidential run

‘Look, there were many funny things that happened in my election that will not happen again,’ she told interviewer Jane Pauley. ‘And I’m hoping that both the public and press understand the way Trump plays the game.’

Clinton said it doesn’t bother her that Trump continues to bring her up during his campaign rallies, where the crowd still chants, ‘Lock her up,’ when the president mentions her name.

‘He knows he’s an illegitimate president,’ Clinton said. ‘I believe he understands that the many varying tactics they used from voter suppression and voter purging to hacking to the false stories – he knows that – there were just a bunch of different reasons why the election turned out like it did.’

‘You know, it was like applying for a job and getting 66 million letters of recommendation and losing to a corrupt human tornado,’ Clinton continued. ‘And so I know that he knows, that this wasn’t on the level. I don’t know that we’ll ever know what happened.’

Trump earned 306 Electoral College votes in 2016 to Clinton’s 232. But Clinton, who won the popular vote, still argues against his legitimacy as a president since she earned around 3 million more votes than him.

Many Democrats who were on-the-fence about looking into removing the president from office have now issued calls for his impeachment following revelations of the nature of his phone call.

Trump released on Wednesday an unredacted version of a transcript of his July 25 phone call in a good faith move he said would prove he never pressured Zelensky or threatened to withhold military aid unless the Ukrainian government probed the Biden’s business dealings there.

Hunter Biden accepted a board position with Ukrainian natural gas firm Burisma Holdings in 2014, when his father was still serving as vice president.

The move raised eyebrows in Washington as a severe conflict of interest, but the administration argued at the time that there were no issues since Hunter is a private citizen.

As Trump comes under fire for the conversation and his dealings with Ukraine, Biden is also struggling to maintain his polling lead as confusion over his potential involvement in the Ukraine scandal circulates.

Many Democratic primary voters have shown their preference for an establishment Democrat, and with Biden slipping and the impending impeachment inquiry, Clinton has emerged back on the media scene.

Her media schedule included her interview on CBS Sunday Morning, another with Stephen Colbert on the Late Show and an appearance on political talk show The View, among others.

She has also touted her relationship with Democrats in Congress.

‘I had a chance to visit with Nancy backstage and I really share her view that the seriousness with which she has addressed the question of impeachment is exactly in line with what a sobering decision she had to make,’ Clinton said.

‘And now she must proceed with an impeachment inquiry into the president,’ she said. ‘This occupant of the Oval Office poses a clear and present danger to our future and our democracy.’

‘This is not a partisan political statement, it is a harsh reality, which is why the Speaker has acted. Because it goes to the core of our values, our strength, our freedom, our security, our prosperity,’ Clinton said.