Sara Rivest, a television reporter from Kentucky who was kissed live on-air by a stranger has said she is glad she spoke out about the incident and the attention she is getting.

Rivest, a reporter for WAVE 3 News in Louisville, was reporting from outside a music festival when a man came up to her and pretended to slap her on the butt before then planting a kiss on her cheek.

Rivest’s video caught the eye of local authorities who have since identified the man as Eric Goodman, 42, and charged him harassment involving physical contact. 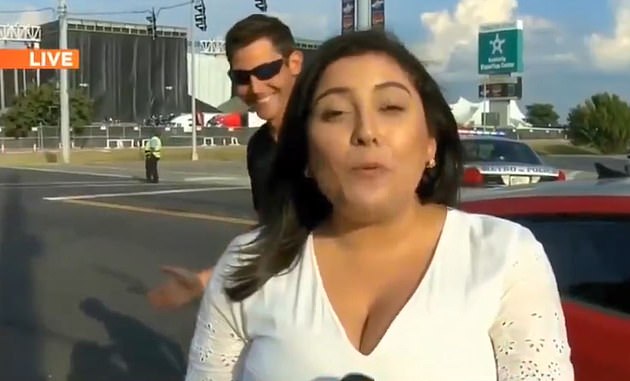 News reporter Sara Rivest was harassed by a stranger while on live TV for WAVE-TV News in Louisville, Kentucky last Friday. The man was identified this week as Eric Goodman, 42 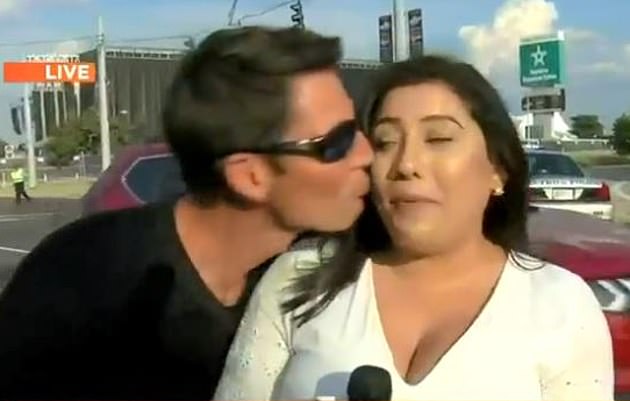 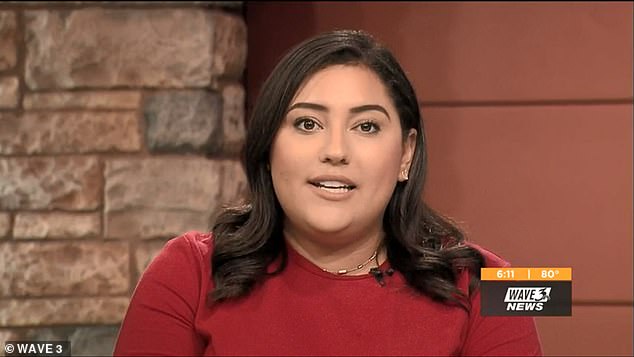 ‘So many women from all different professions have told me “some guy kissed me on the bus the other day” or “kissed me in the lobby of my apartment building” or “touched me inappropriately,” Rivest told

‘It’s been really eye-opening and just speaks to the gravity of this problem.’

Rivest said the entire encounter happened so quickly there was nothing she or her cameraman could have done.

She said the unwanted kiss she received ‘felt like a crime’ but she didn’t know if it was one until police told her it ‘absolutely was.’ 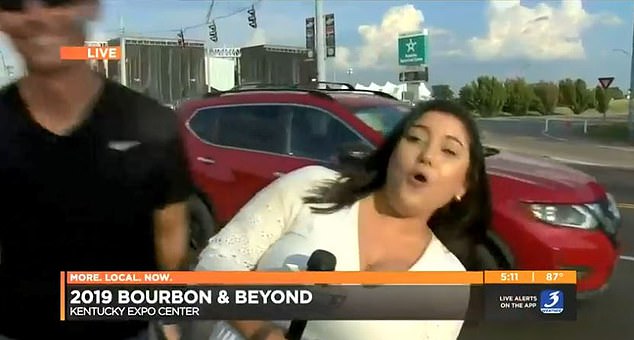 Trying to keep her composure Rivest said, ‘That was not appropriate’ before her report aired 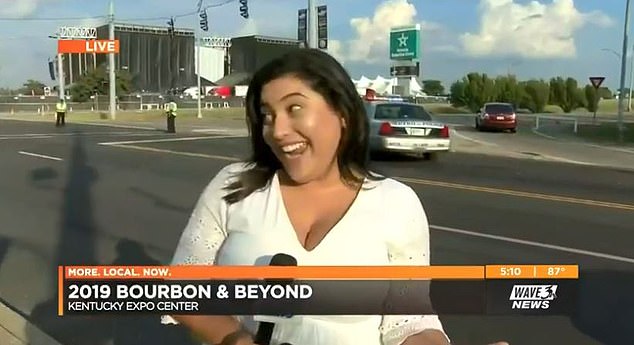 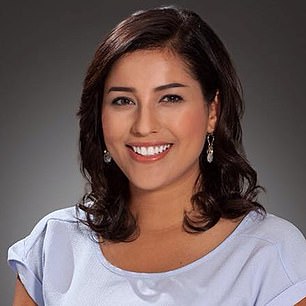 ‘I was so taken a back. Internally, it threw me off but I tried to just remain calm on the outside since I was on camera. But it was a shock, for sure,’ Rivest said

‘There was nothing my photographer or I could do in the moment because we had a job to do, so I said on air, “That was so inappropriate,” and tossed to my story,’ Rivest said.

‘Once it cut to my package I just screamed at him, “You’re so rude!” But he was long gone by then.’

‘I was so taken a back. Internally, it threw me off but I tried to just remain calm on the outside since I was on camera. But it was a shock, for sure,’ Rivest said

Although initially shaken up by the incident, Rivest’s shock soon turned to anger.

Upon returning to the station and watching the clip she noticed that the man had also pretended to slap her butt.

She posted a snippet of her live broadcast on Twitter with the message, ‘Hey mister, here’s your 3 seconds of fame. How about you not touch me? Thanks!!’

‘I thought it was important to share that,’ she added.

Goodman has since written a letter of apology to Rivest which she then went on to read on-air. 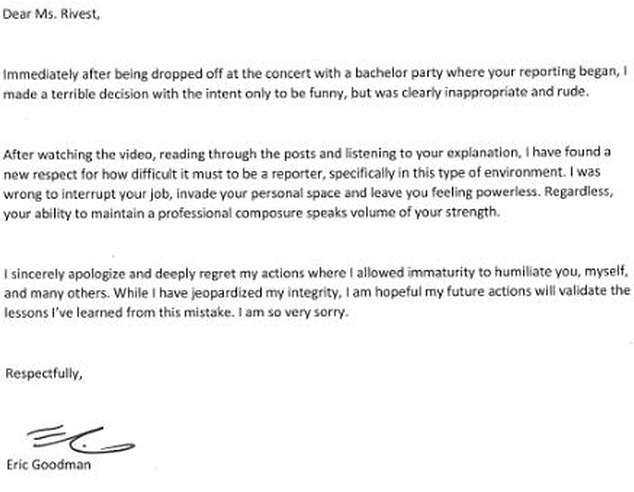 The man charged with harassment, Eric Goodman, 42, has written a letter of apology to Rivest 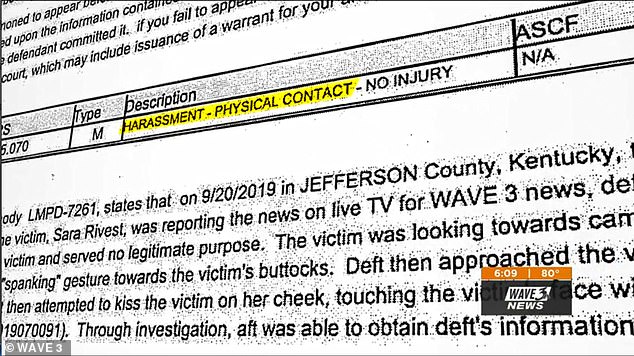 Goodman has been charged with harassment with physical contact, a misdemeanor 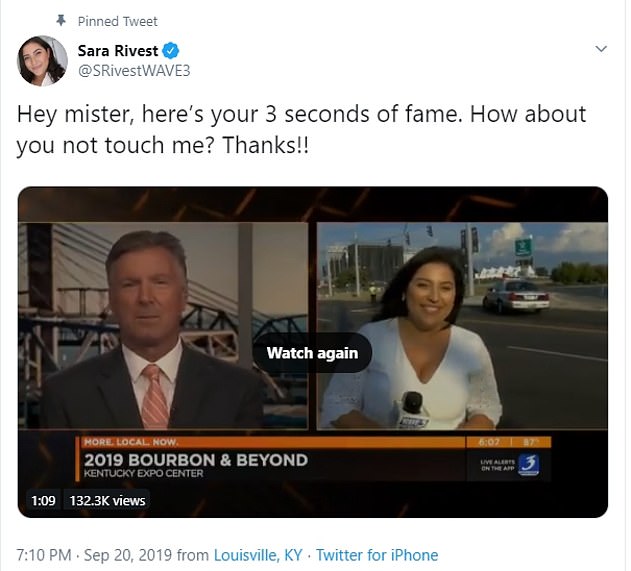 Rivest shared the clip of the kiss on Twitter saying: ‘Hey mister, here’s your three seconds of fame. How about you not touch me? Thanks!!’ The clip has racked up over 170,000 views 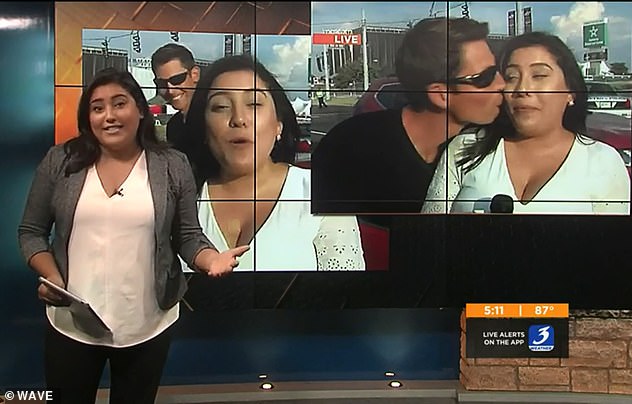 Rivest later called out harasser during the evening broadcast saying she was left shaken by the incident adding, ‘I personally didn’t know how to react. I was shocked, but my nervous laughter does not equate to approval of his actions’

‘After watching the video, reading through the posts and listening to your explanation, I have found a new respect for how difficult it must be to be a reporter, specifically in this type of environment,’ Goodman wrote.

‘I was wrong to interrupt your job, invade your personal space and leave you feeling powerless. Regardless, your ability to maintain a professional composure speaks volume of your strength.’

Rivest said she believes Goodman’s apology is sincere and that he has ‘changed through this.’

‘I don’t even think this guy is bad,’ she said. ‘He’s just a guy who thought this was funny, and that’s a problem.’ 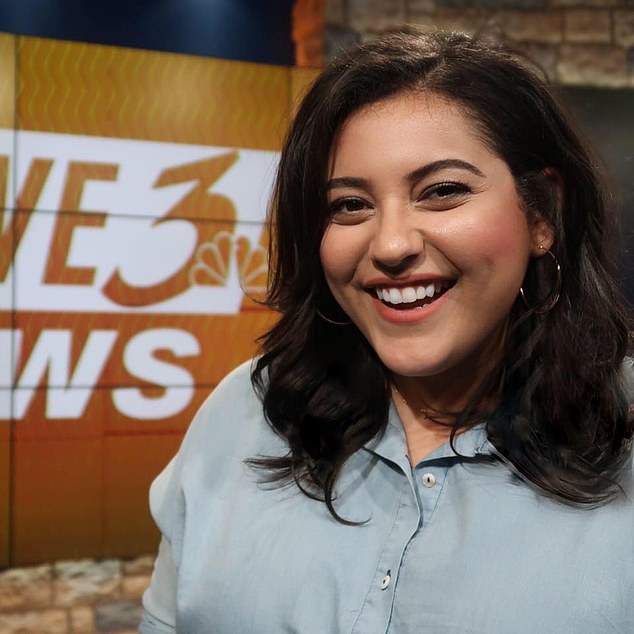 ‘I’m glad I spoke out,’ Rivest said. ‘I believe it has changed things, even if just a little bit.’

‘I’m glad I spoke out,’ she added, ‘because I believe it has changed things, even if just a little bit.’

In the days following Goodman’s being charged, Rivest says it feels as though she has been harassed once again.

‘The reactions have gone from being 99% positive to a lot of people being really nasty to me, with comments about me being fat and ugly and that he shouldn’t be charged,’ she said. ‘It makes me feel vulnerable again. … I’m having a hard time learning how to deal with that.’

World War Two veteran honored with free food for life at his local Chic-fil-A
The Fast and the Furious director accused of molesting transgender daughter when she was a toddler
Meghan's mother Doria calls her daughter her 'little flower'
As motherhood awaits, an enchanting glimpse into Meghan's own childhood
WestWorld War II! Thandie Newton, Rodrigo Santoro and extras dressed as Nazis film season three
Pugs blare their owner's car horn after he takes too long to pay for fuel in Thailand
Hilaria Baldwin continues to share her miscarriage heartbreak on Instagram
A very Kardashian Christmas: Kim, Khloe, and Kylie cozy up as Sia surprises VIP guests