The family of a man who was shot in the head by Mississippi police officers after they went to the wrong house to investigate a domestic dispute has been told that the state is not liable for his death because he was an illegal immigrant.

In a shockingly blunt legal brief filed earlier this month, lawyers for the city of Southaven also accuse the man’s widow of being married to multiple men.

They say that even if it was the city’s fault that he died, the pair have no protection under the 14th amendment of the US constitution because neither is a US citizen.

Ismael Lopez was shot and killed by unnamed police officers who showed up at his door, pounding on it, in July 2017.

They had received a call reporting a domestic violence incident and they went to Lopez’s home mistakenly. 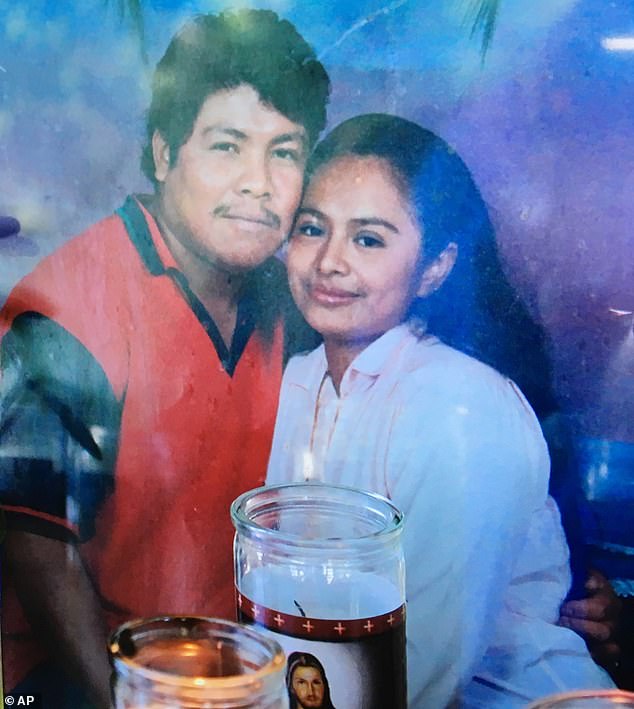 Ismael Lopez, 41, was shot dead last year. His widow Claudia Linares, pictured with him, is suing the city of Southaven for wrongful death

What exactly happened next is in dispute. The man’s widow, Claudia Linares, denies the police’s claim that her husband stuck a gun out of the door then closed it.

At the time, neighbors said the cops shot through the door and struck him in the back of the head. He was pronounced dead shortly afterwards.

The cops involved have never been named. They were not required to wear body cameras and a grand jury decided not to indict them after looking at the evidence of the shooting. 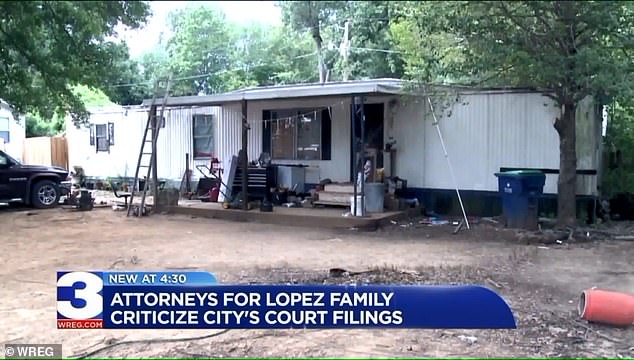 The family’s trailer in Southaven, Mississippi. Police showed up there in July 2017 to respond to a domestic incident but they got the wrong home and knocked on Ismael’s door 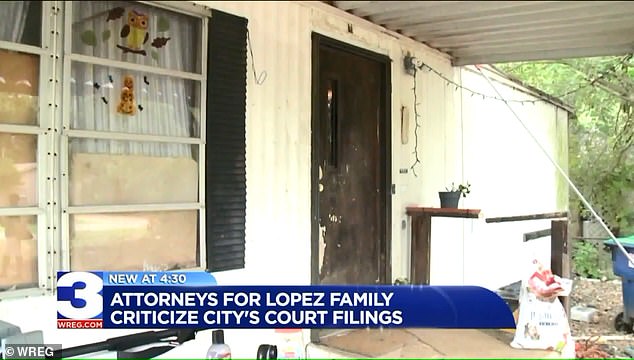 The cops were not wearing body cameras which would have captured the shooting. They claimed Lopez poked his gun through a crack in the door then retreated, slamming it in their face. His widow disputes it 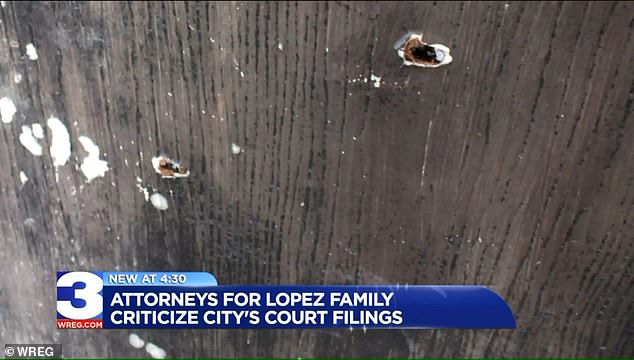 Bullet holes show where shots were fired through the door last July. Neighbors say Lopez was on the other side

The city filed an argument on September 3, disputing that they are liable.

She questioned that they had ever been married, alleging that Linares had been married to two other men, and called the victim a ‘fugitive’ who had ignored several deportation orders.

‘If he ever had Fourth Amendment or Fourteenth Amendment civil rights, they were lost by his own conduct and misconduct.

‘Ismael Lopez may have been a person on American soil but he was not one of the “We, the People of the United States” entitled to the civil rights invoked in this lawsuit,’ Kerby wrote.

Linares’ lawyers said on Thursday they were stunned by the language used in the filing. 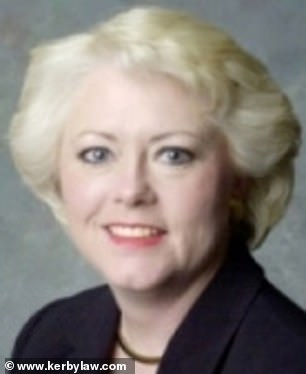 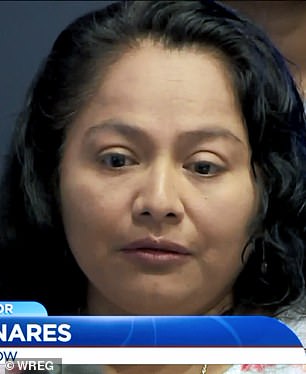 Katherine S. Kerby (left), the lawyer for the city, called the man’s widow his ‘alleged wife’ throughout the legal filing and questioned if they were ever married – something she says is ‘chilling and offensive’

‘We’re stunned that someone put this in writing,’ her lawyer Murray Wells said, describing it as ‘chilling’.

He said their argument might as well have been that ‘stormtroopers can come into your house and kill you’ if you are undocumented immigrant.

‘It’s a real shame that they have to use these tactics to soil someone’s name when she lost her partner, the love of her life, in a tragic accident,’ Aaron Neglia, another one of the woman’s lawyers, said.

Linares produced a marriage certificate dated 2003 to prove their claims that she and Lopez were not legally married wrong.

The Supreme Court has routinely ruled that people in the US are protected and entitled to basic human rights regardless of their immigration status.

Bill and Hillary cash in AGAIN with nationwide tour and demand as much as $750 a seat
Phoenix woman fell in love with her best friend's father
Kyrsten Sinema sworn in as first openly-bisexual senator as glamorous outfit is criticized
Turkey's Ergodan refuses to meet with John Bolton after flap over Syria troop withdrawal
North Korean leader Kim Jong-un leaves Vietnam after failed summit with Donald Trump
Woman, 42, wakes up with a BLACK EYE and swollen face after being scratched by her cat
Couple who found out they had a son after an IVF blunder tell their story
Healthy lifestyles reduce the risk of type 2 diabetes up 75%