Amber Guyger had her taser strapped to her utility belt when she shot dead her neighbor after entering his apartment allegedly thinking it was her own, her murder trial has heard.

The 31-year-old is on trial after she shot dead 26-year-old Botham Jean in September last year when she was off-duty from the Dallas Police Department.

A crime scene analyst, who examined the scene and took photos of Guyger after the shooting, testified on Wednesday that the cop had a ‘taser’ and her pistol strapped to her.

Prosecutors showed photos to the jury that analyst Robyn Carr took of Guyger inside a crime scene van after she fatally shot Jean. 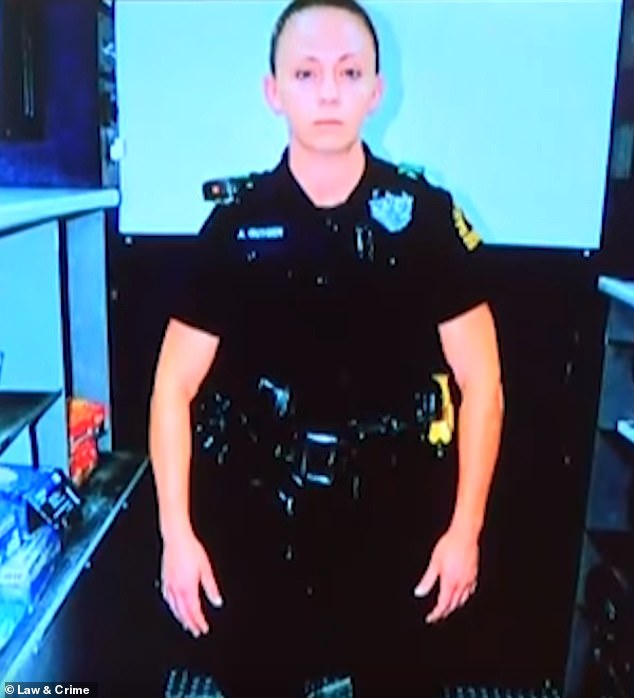 Photos taken by a crime scene analyst were shown during Amber Guyger’s murder trial on Wednesday. The analyst testified that this photo showed Guyger had a taser and stun gun strapped to utility belt when she shot dead Botham Jean

Guyger can be seen in full police uniform with her utility belt still strapped on.

Prosecutors pointed to Guyger’s stun gun and the analyst confirmed that it was a taser that ‘shoots out an electric probe that gets inserted into an individual’s skin’.

She also confirmed Guyger had her pistol strapped to her at the time.

Carr seized Guyger’s gun – photos of which were also shown to the jury – as evidence in the investigation.

The defense will cross-examine Carr on Thursday morning.

Guyger was off duty but still in uniform when she shot Jean in his home on the evening of September 6, 2018.

She told investigators that after a 15-hour shift she parked on the fourth floor of her apartment complex’s garage – rather than the third floor where she lived – and found the apartment’s door ajar.

Believing she was at her own apartment and seeing a silhouette of a figure who didn’t respond to verbal commands, Guyger said she fired two shots, killing him.

Prosecutors have said Guyger should have noticed she was on the wrong floor while Guyger’s attorneys have argued that she fired in self-defense based on the mistaken belief that Jean was a burglar. 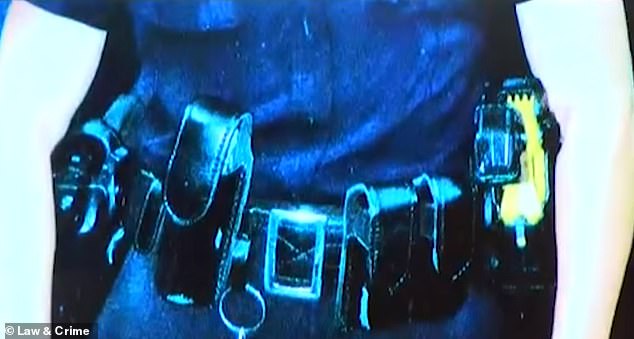 This photo taken inside a crime scene van after Guyger fatally shot Jean shows her gun (far left) and her stun gun (far right) strapped to her utility belt, the analyst testified 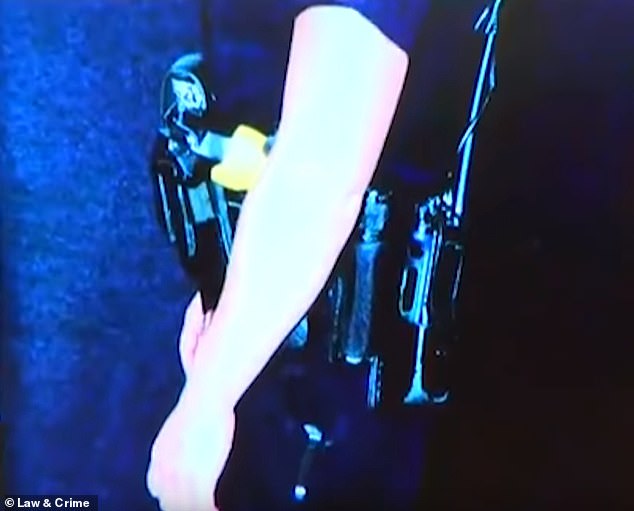 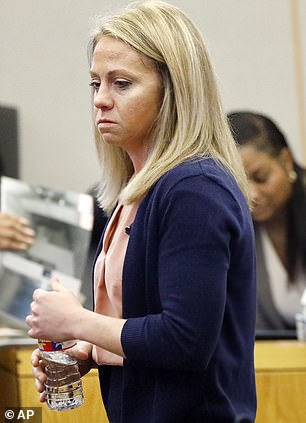 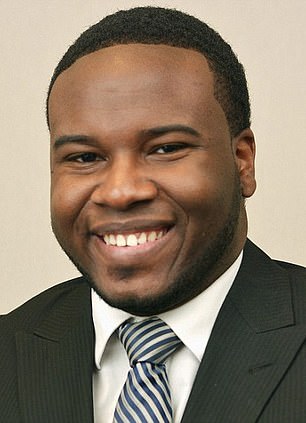 Amber Guyger, a fired Dallas police officer, is on trial for fatally shooting her 26-year-old Botham Jean last year after she said she mistakenly entered his apartment thinking it was her own

In a frantic 911 call played in court early in the trial, Guyger – who was later fired from the force – says ‘I thought it was my apartment’ nearly 20 times.

She also says: ‘I’m gonna lose my job’ and ‘I am going to need a supervisor.’

Throughout the call, she also spoke to Jean, called him ‘bud’ and encouraged him to stay alive.

Jurors have also been shown footage from a body camera worn by one of two officers who arrived at the apartment after Guyger called 911 to report the shooting.

Officers could be seen running towards Jean’s apartment as Guyger screamed out that she was off-duty. Guyger was standing near the front door when the officers arrived and could be heard saying: ‘I thought it was my apartment’.

The footage showed the two officers immediately rendering CPR to Jean who was shown lying on the floor surrounded by blood.

Guyger appeared to be pushed out of the apartment while the officers gave Jean first aid.

A different body cam image showed Guyger standing in hallway outside the apartment looking at her phone as CPR was being administered.

She was also shown hugging and speaking to fellow officers on the scene, which prosecutors have argued showed she was given special treatment. 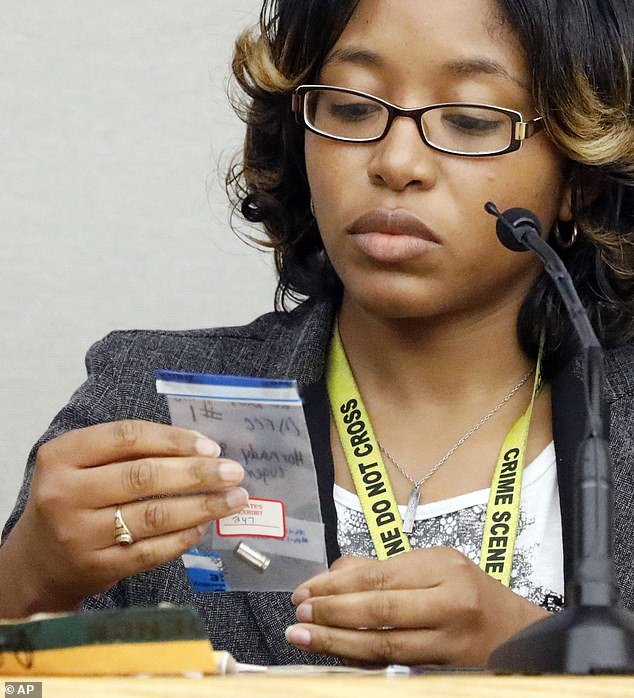 Crime scene analyst Robyn Carr, who took the photos of Guyger, testified about the evidence on Wednesday (above). The defense will cross-examine Carr first thing Thursday morning 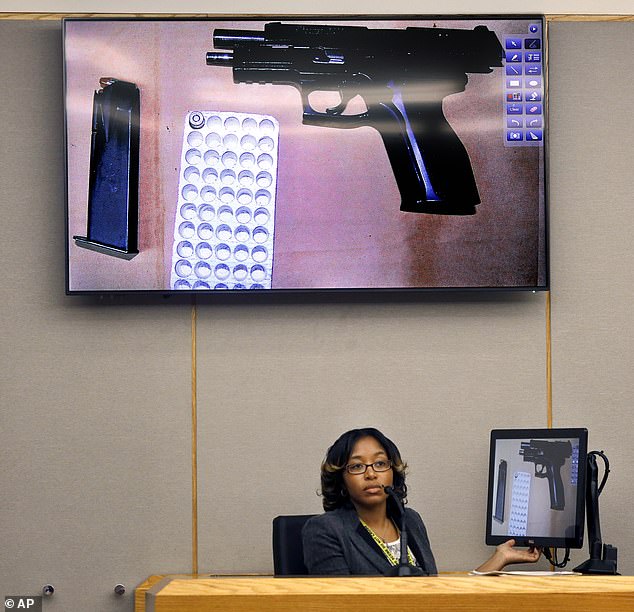 It emerged during testimony on Wednesday from lead investigator, Texas Ranger David Armstrong, that the door of Jean’s apartment did not close properly because it had a structural flaw.

At the time of her arrest, Guyger said she had found the door of the apartment she thought was hers ‘slightly ajar’.

She claimed the door opened when she used her electronic key to enter the apartment and she believed she was being robbed when she saw Jean.

Armstrong said it appeared the screws in the strike plate of Jean’s door had been screwed in too far, which caused it to ‘bow out’.

This flaw prevented the door from closing properly as it was designed to do, Armstrong told the court.

He said it meant that the door would sometimes latch but other times it wouldn’t secure and close properly.

Earlier during Armstrong’s testimony, defense attorneys showed photos to the jury that compared Guyger’s apartment layout to that of Jean’s home. 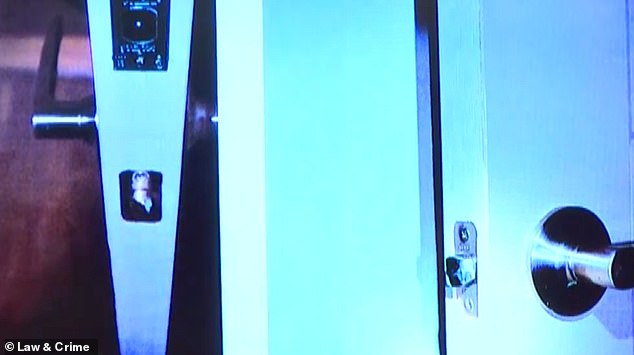 The door of the Dallas apartment where Amber Guyger shot dead her neighbor after saying she mistakenly thought it was her own had a structural flaw that caused it not to latch and close properly, an investigator testified. The images above were taken by authorities during their investigation 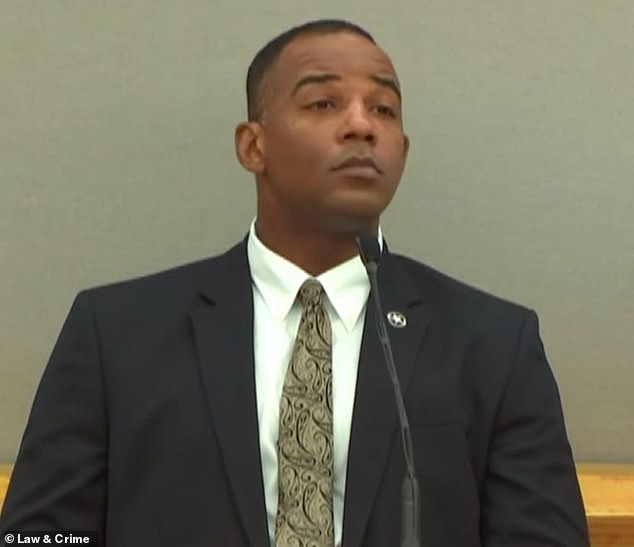 Texas Ranger David Armstrong testified on Wednesday that he doesn’t believe Guyger committed a crime. The jury wasn’t present when he said he believed she acted reasonably after perceiving Jean as a threat but the judge ruled jurors were not allowed to hear his comments

Armstrong testified that the layouts of the apartment were the same and that both Guyger and Jean had their couch and TVs in the same position.

Photos comparing views of the hallways, parking garages and doorways on the third and fourth floor of the apartment complex were also shown to the court.

When questioned by defense attorneys, Armstrong agreed that they looked similar.

Armstrong testified that he doesn’t think Guyger committed a crime.

‘I don’t believe that (the shooting) was reckless or criminally negligent based on the totality of the investigation and the circumstances and facts,’ Armstrong said.

The jury wasn’t present when he said he believed she acted reasonably after perceiving Jean as a threat. The judge later ruled that the jury couldn’t hear the Texas Ranger’s opinion of the reasonableness of Guyger’s actions.

In the jury’s presence, Armstrong testified that going to the wrong apartment was common at that complex.

Armstrong said he interviewed 297 of the 349 residents living at the apartment complex. He said 46 of those residents had mistakenly gone to the wrong floor and put their key in the door before.

The percentage was higher for those living on the third and fourth floors – the same floors as Guyger and Jean – with 38 saying they had unintentionally walked to the wrong apartment.

Armstrong also said that 93 of the residents had parked on the wrong floor in the parking garage on previous occasions. He said 76 of those residents lived on the third or fourth floor.

Facebook axes accounts of firms which build facial recognition software for Russian government
Clemson exacts revenge on defending champion Alabama with 44-16 BLOWOUT win in NCAA title game
Trump admits Mueller acted honorably but claims his enemies have 'done so many evil things'
Family of fan who died when she was hit in the head by a foul ball reject moment of silence
Fifty years after the first Moon landing, our man discovers that Florida's space centre is a blast!
Hamilton star Miguel Cervantes says daughter Adelaide has tragically died at three
The balloons WILL fly in the Macy's Thanksgiving day parade
Son, 32, 'stabs his father, 77, to death while he was in a Zoom AA meeting with 20 other men'