The second parent sentenced in the ongoing Operation Varsity Blues scandal will be spending far more time behind bars than his predecessor Felicity Huffman.

Devin Sloane, 53, will spend four months behind bars U.S. District Judge Indira Talwani ruled on Tuesday, which is notably less than the year-long sentence prosecutors were seeking in his case but far greater than the 14 days Huffman will serve starting next month.

Judge Talwani also ordered Sloane to perform 500 hours of community service over two years of supervised release and fined him $95,000.

Sloane, who is the founder and president of the drinking and wastewater provider waterTALENT, entered a guilty plea earlier this year to a single count of fraud and conspiracy in a deal with prosecutors. 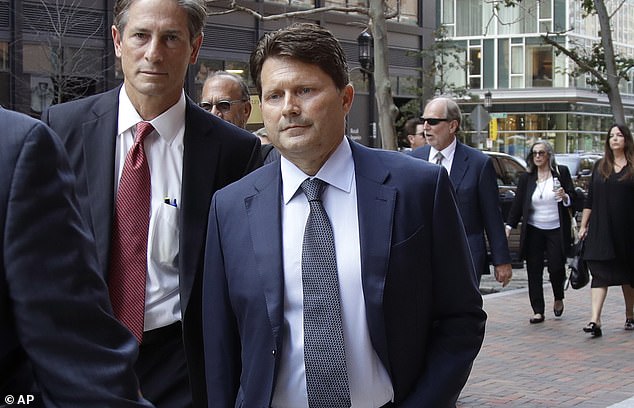 The millionaire admitted to buying gear off Amazon and making his son pose in a pool to appear to be a water polo player.

He then sent those photos and a $250,000 donation to Key Worldwide, who in turn guaranteed that his son would be presented as a member of the team, thus skirting the traditional admissions process.

The plea agreement that was submitted to the court stated that Sloane would have to pay a maximum fine of $250,000; a mandatory special assessment of $100; restitution; and forfeiture to the extent charged in the Information.

He would also have to serve time behind bars said prosecutors in that filing, though far less then the 20 years that the charge carries in some cases.

Instead, prosecutors said that they will recommend between 15 and 21 months in federal prison.

In the end, a year was recommended to the court, who ruled that Sloane would serve four months.

The actions that landed him behind bars were detailed in a complaint submitted in federal court earlier this year.

‘On or about January 4, 2017, Sloane e-mailed [Singer]: “Should we start thinking of a short list of schools to tour now?” [Singer] responded, in substance, that a short list typically required “SAT and Subject test scores,” but that Sloane could begin to create a list if 130 “you are ready to commit to the notion of the financial side door. Your thoughts?,”‘ states the complaint.

‘Sloane replied three minutes later that he and his son would “come up with schools to visit.”‘

Some time later, it was revealed that Singer had ‘agreed with Sloane  to secure his son’s admission to USC as a purported water polo recruit, even though Sloane’s son did not play water polo competitively.’

That is when the photo doctoring got underway.

‘On or about June 27, 2017, Sloane e-mailed [Singer] a photograph of his son purporting to play water polo, with his right arm and upper torso exposed above the water line. In the e-mail, Sloane asked, “Does this work??”‘ reads the court filing.

‘[Singer]  responded: “Yes but a little high out of the water- no one gets that high.”

He then moved the boy’s body lower down in the water and sent that to Singer.