Meng, a 47-year-old Chinese citizen, appeared in court to fight extradition to the US where she’s facing bank fraud charges. She’s accused of misleading HSBC Holdings PLS about Huawei’s business in Iran.

On Tuesday her lawyers accused Canada of abusing its immigration process to gather evidence against Meng.

Meng, the daughter of Huawei founder Ren Zhengfei who runs the world’s largest telecommunications equipment maker, has maintained her innocence in the case.

She was seen smiling as she walked into the hearing in a black collared dress with sequins detail, black bejeweled heels, and an electronic monitoring device strapped to her left ankle.

Meng has been dressing to impress for her court dates. Yesterday she donned a purple gown and glittery silver heels. 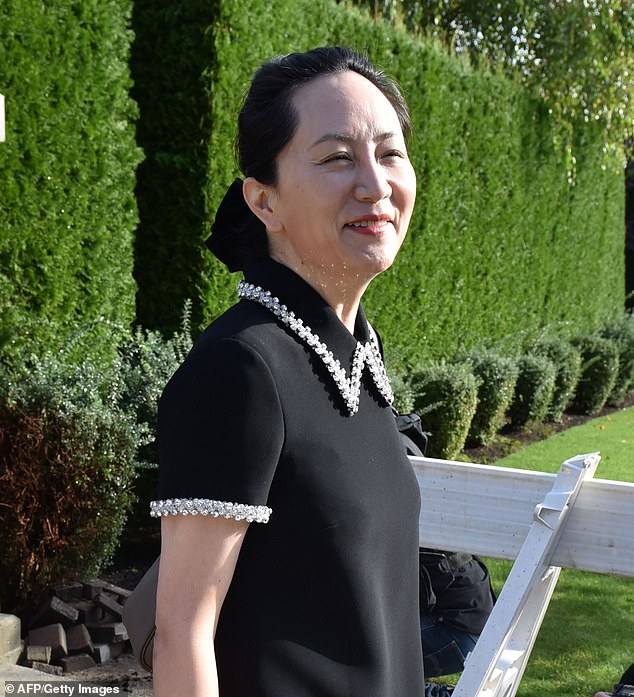 She arrived to court smiling in a black sequins gown, bejeweled heels and an ankle electric monitoring device 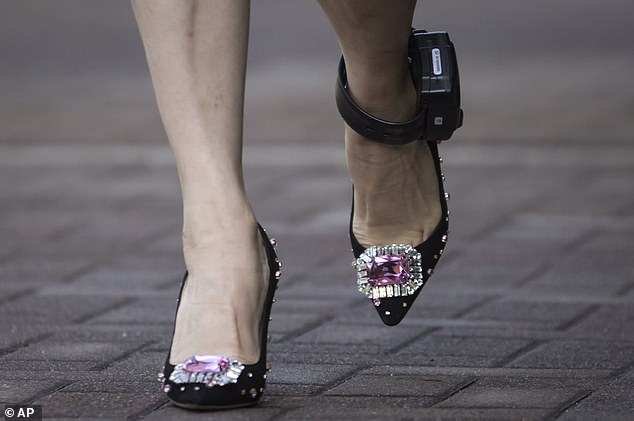 In the hearing Meng attorney’s claimed that when she was detained at Vancouver’s airport on December 1 at the request of the U.S., she repeatedly asked border officials why she was being detained but wasn’t presented with a provision warrant.

She had just landed from Hong Kong when she was searched and questioned by border officers about her home around the world and business affairs with Huawei.

She claims she wasn’t told her rights until about three hours after her arrival.

‘She was not told she was the subject of an arrest warrant,’ Meng’s lawyer Richard Peck said. ‘She was not told this was a warrant that came out of the U.S. that had to do with activities some years ago.’ 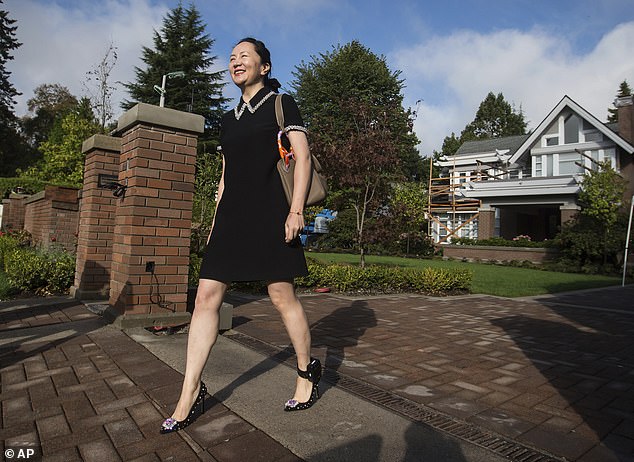 In the Tuesday hearing her lawyers accused Canada of improper conduct, saying she was detained without presenting a provisional warrant and wasn’t told her rights till hours later 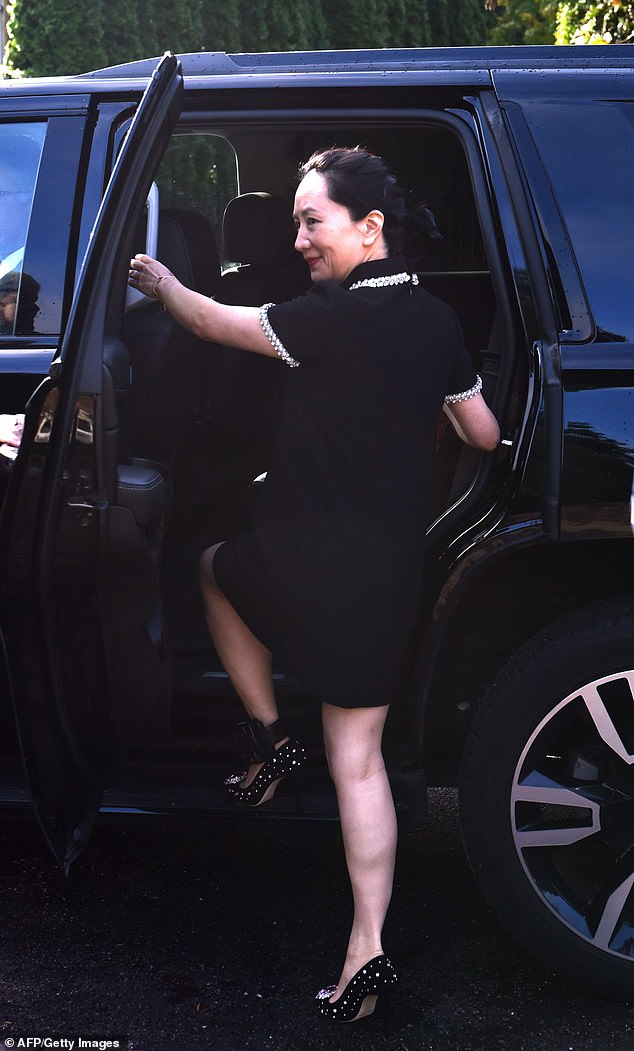 At Tuesday’s hearing, Meng lawyers played portions of a video without sound of showing Meng was detained at the airport.

Tuesday’s meeting was the second day of a three-day hearing set to end Wednesday. It will resume on September 30.

The hearings are set to discuss evidence disclosure ahead of a formal extradition hearing.

In a filing submitted on Monday, Meng’s lawyers said they want to know why Canadian police allowed the lengthy border examination, and why the U.S. Federal Bureau of Investigation wanted contact information for officers on the day she arrived. 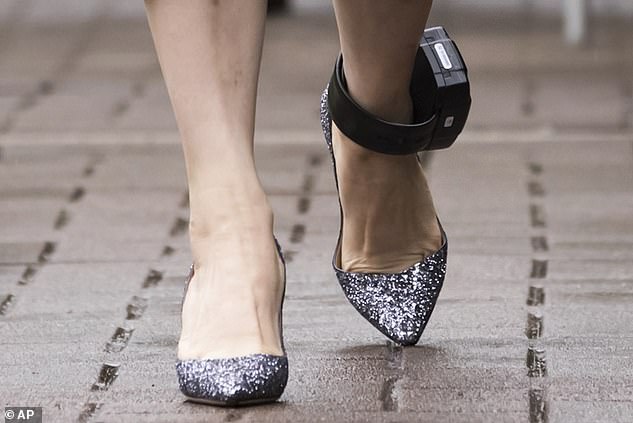 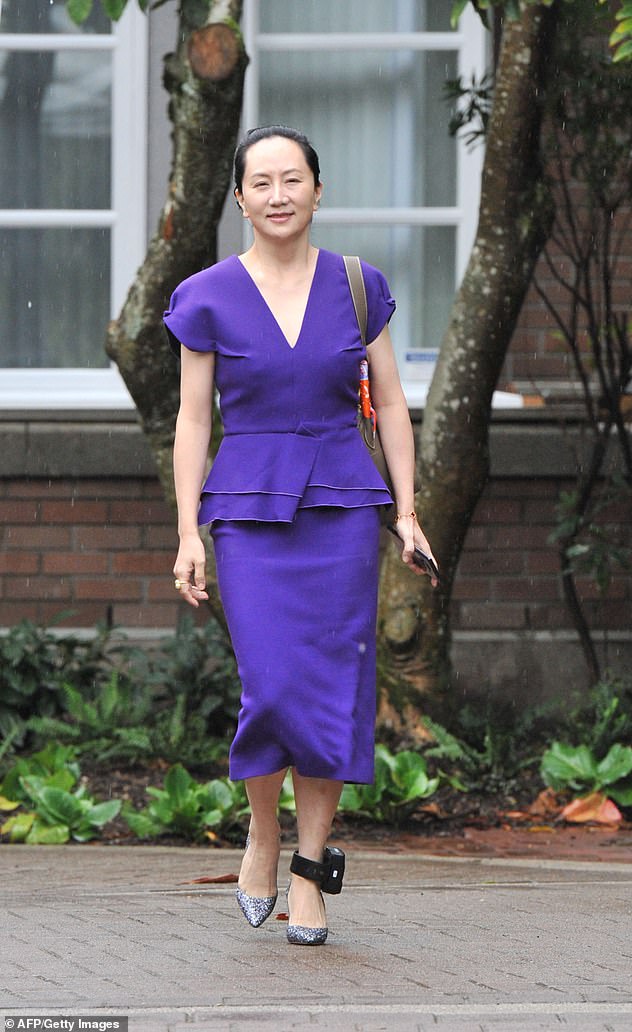 On Monday, she made sure she looked glam in a purple dress, with her head held high and a smile on her face

However, on Monday the attorney general of Canada said in a release that there was no evidence border officials or police acted improperly, or that the conduct of Canadian or foreign officials compromised the fairness of the extradition proceedings.

The defense claims that, if the process was abused, it justifies halting extradition proceedings. Besides accusations of misconduct related to her detention, they argue the United States is using Meng for economic and political gain, noting that after her arrest, U.S. President Donald Trump said he would intervene if it would help close a trade deal.

The government claims there is no justification for halting extradition proceedings. In its filing, it called the defense’s effort for more disclosure a ‘fishing expedition.’ 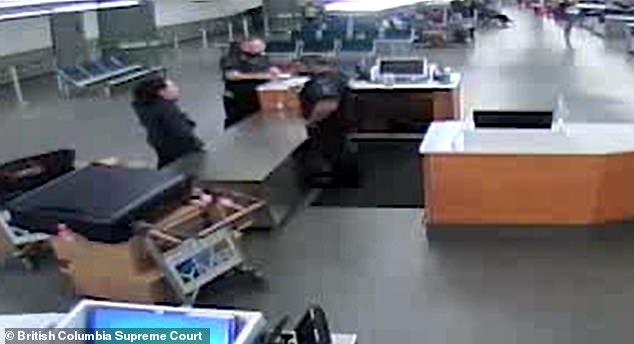 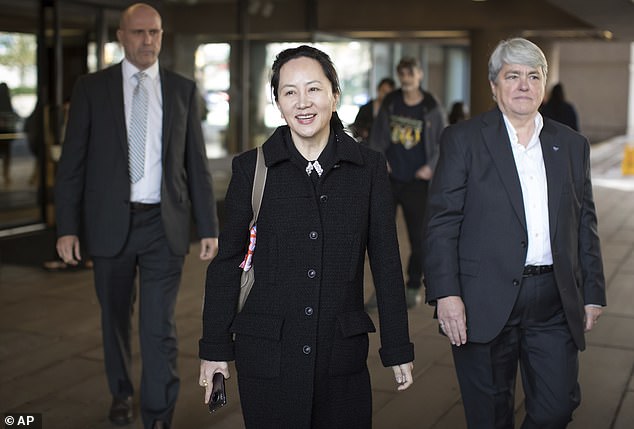 Meng, the daughter of Huawei founder Ren Zhengfei, spent 10 days in jail in December but was then released on $7.5 million ($10 million in Canadian dollars) bail and is now living in one of her two multimillion-dollar homes in Vancouver

The arrest has strained China’s relations with both the United States and Canada. In Beijing, China’s Foreign Ministry reiterated the government’s call for Meng to be released and allowed to return to China.

Meng, the daughter of Huawei founder Ren Zhengfei, spent 10 days in jail in December but was then released on $7.5 million ($10 million in Canadian dollars) bail and is living in one of her two multimillion-dollar homes in Vancouver.

Huawei, the world’s largest telecommunications equipment maker, has been accused by the United States of activities contrary to national security or foreign policy interests. It is also a defendant in the U.S. case against Meng.