The mother of a non-binary child has confessed that she finds it ‘really hard’ to use the correct pronouns for them as ‘it seems too much like hard work’.

Sarah’s 20-year-old child came out as non-binary and pansexual last year and changed their name from Sophie to Robin, saying they did not identify as either a male or female.

The mother has admitted that although she is accepting of her child’s gender identity, she hasn’t made ‘a great deal of effort’ to stop calling them ‘she’.

‘I find it really hard to use the “they” pronoun, really hard,’ Sarah told . 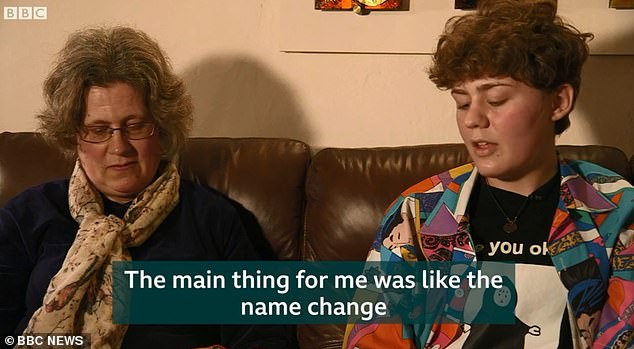 Sarah’s 20-year-old child (pictured together) came out as non-binary last year and changed their name from Sophie to Robin, saying they did not identify as either a male or female 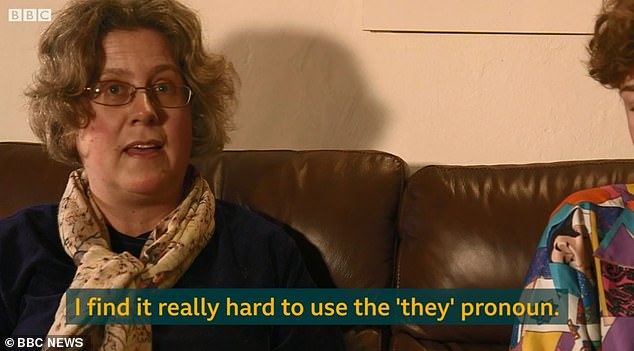 Sarah admitted that although she is accepting of her child’s gender identity, she hasn’t made ‘a great deal of effort’ to stop calling them ‘she’ because she found the pronouns difficult

‘I will put my hand on my heart and say I haven’t made a great deal of effort because it seems too much like hard work.’

Sarah also admitted she is worried about whether Robin being non-binary would affect their career as a doctor later on in life, and quizzed her child on how they would identify in the world of medicine.

Sarah said: ‘Obviously going on to study medicine some people do request to see a female doctor for whatever reasons. And I don’t know how you would define yourself in the world of medicine, how does that work?’ 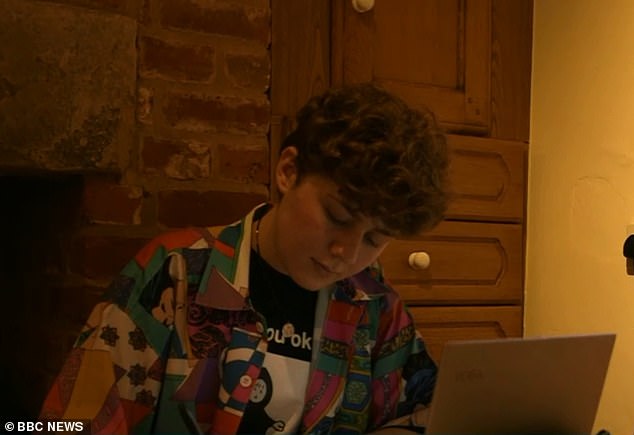 Robin is studying to become a doctor, but their mum fears their gender identity may affect their chances of succeeding in the workplace. Pictured, Robin at home

Sarah explained that she doesn’t want Robin ‘missing out’ on having a family and said that for her, the idea of a ‘happy home life’ involves having children.

Sarah said: ‘I suppose I didn’t want you to miss out, on the idea of you having a family. I guess every mother wants their child to have a happy home life and I guess for me that involved having kids and I wouldn’t have had it any other way.’

Speaking candidly, Sarah went on to explain that she finds it ‘uncomfortable’ discussing Robin’s gender with her religious friends.

Shes said: ‘I do have some friends, who are Christian friends they’re great you know and when I sort of mentioned you coming out as non-binary.

Sarah confessed she doesn’t want Robin ‘missing out’ on having a family. Pictured, Sarah with Robin and her other children

‘I did sort of sense almost an “oh okay” as if they don’t really understand it.

‘So from my point of view I feel a bit uncomfortable talking to people with very strong Christian beliefs, I don’t think my grandmother would have been very accepting.’

Robin went on to emphasize the importance of communication while experiencing a child who is questioning their gender identity and Sarah admitted she still feels sad about the ‘mental anguish’ Robin went though.

She said: ‘I still feel now so sad in some ways you had to out yourself through you know those mental anguish you had some very dark moments you were very depressed.’

Man charged with homicide of distinguished legal professional, 71, who was shot lifeless in his Chic...
Security guard bitten onthe face during docklands bar brawl after Derby Day
Mueller gives Flynn a pass and says he should get NO PRISON time
Samantha Markle hits back at 'fake news' that Meghan had a guard to protect her
West Point cadet plummets to his death after 'hanging onto a rock ledge' at NY cliff-diving spot
Shocking moment two suspects wheel a dead body wrapped in a carpet on a Target shopping cart
Vegan diets 'could help people lose nearly a pound a week'
Honduran worker injured in New Orleans Hard Rock Hotel collapse to be DEPORTED days after injury