Police officers in Paris have used tear gas to break up anti-government demonstrators after crowds started to gather in the streets, ahead of a busy afternoon of events and protests in the French capital.

More than 7,000 officers are to be deployed for rallies today over fears that yellow vest protesters could try to infiltrate a march against which is also planned.

This morning police in riot gear were moving quickly to disperse those around the Champs-Elysees avenue, Saint-Lazare train station and Madeleine plaza – areas where protests have been banned this weekend.

Most demonstrators didn’t wear the fluorescent vests that gave the movement its name and authorities said at least 39 people have been arrested and 596 security controls have been implemented. 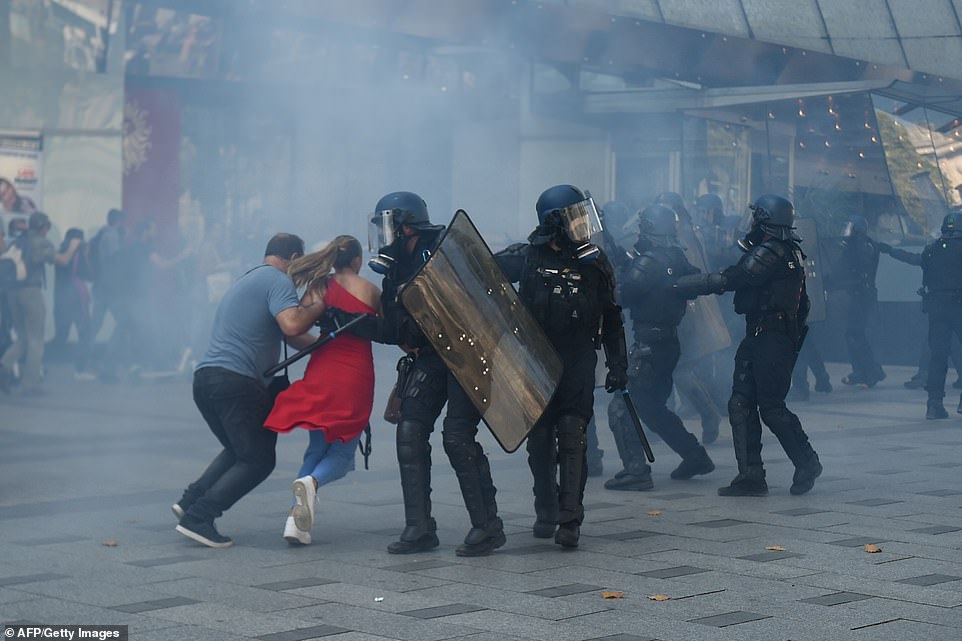 French riot police have fired tear gas on the Champs Elysees avenue during an anti-government demonstrations called by the yellow vests this morning. More than 7,000 officers are to be deployed for rallies, including a climate change protest, today 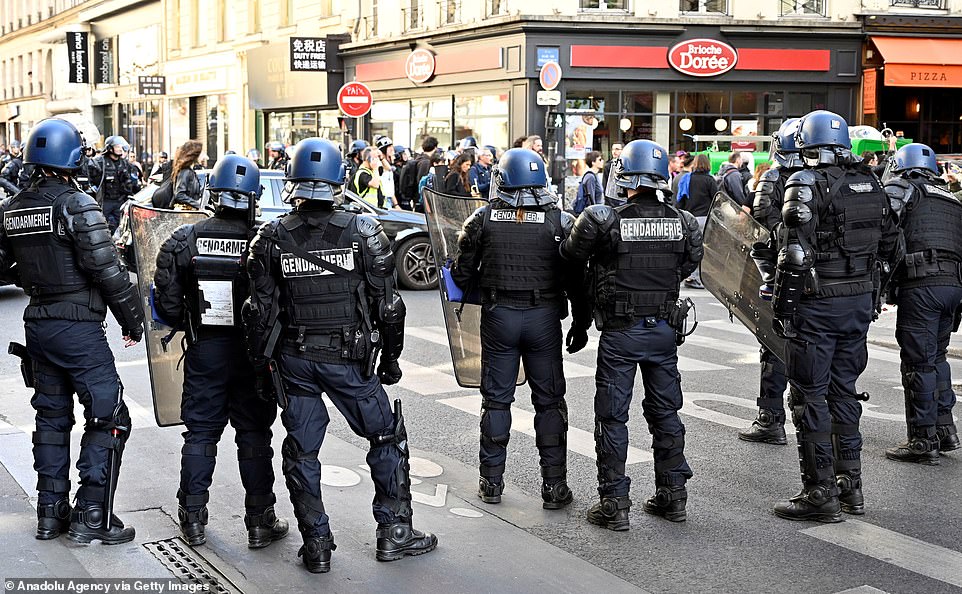 Authorities said at least 39 people have been arrested today and 596 security controls have been implemented. Police are seen on Boulevard Haussmann in Paris this morning as crowds pass on the other side of the road 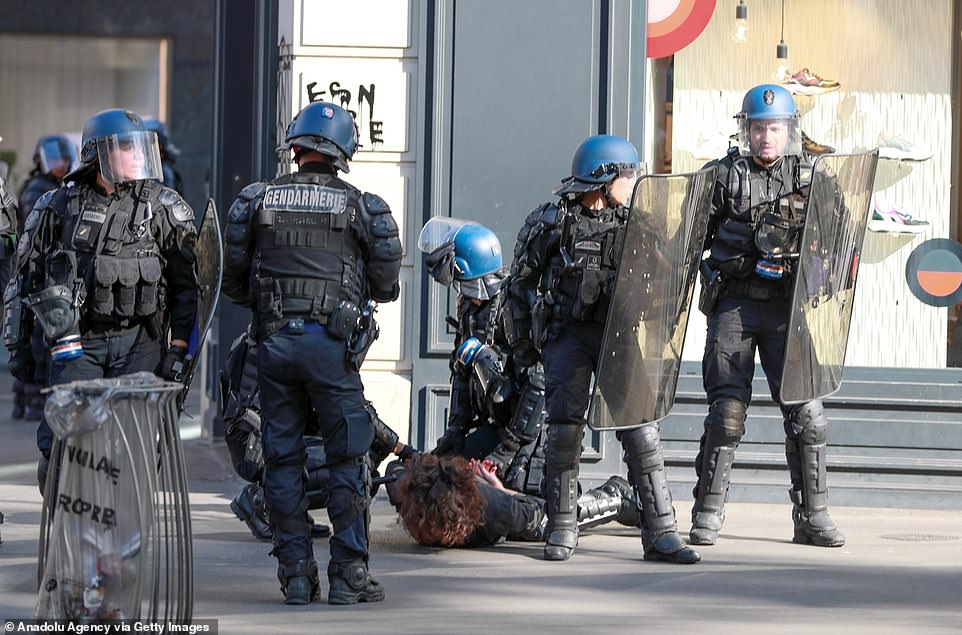 Several calls for demonstrations have been issued in the French capital today by yellow vest supporters, environmental activists and a far-left workers union. Pictured is one protester being taken into custody by officers

Protests have been banned across the city, including at the presidential palace, government and parliament buildings, the Champs-Elysees, the Eiffel Tower and Notre Dame Cathedral.

Several calls for demonstrations have been issued in the French capital by yellow vest supporters, environmental activists and a far-left workers union.

France’s annual heritage weekend, a very popular event with many cultural sites open to the public which are usually off limits, is also taking place today.

Climate activists are demonstrating Saturday afternoon in Paris to demand more action from the government and companies to reduce emissions and save the burning Amazon rainforest and the melting Arctic. 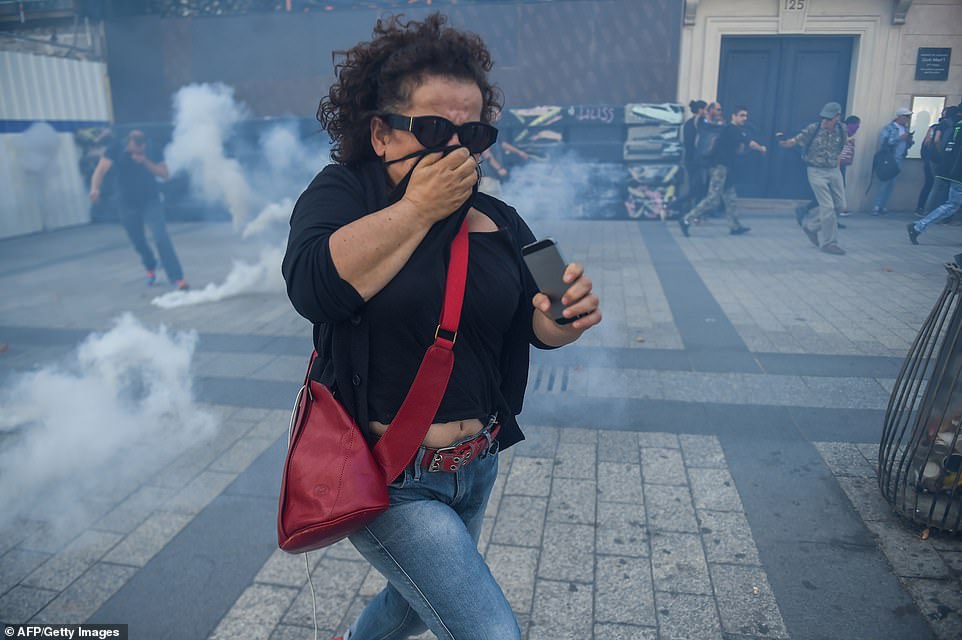 Protests had been banned in public areas including  the Champs-Elysees avenue, Saint-Lazare train station and Madeleine plaza today. Pictured is a woman covering her mouth as she runs away from tear gas this morning 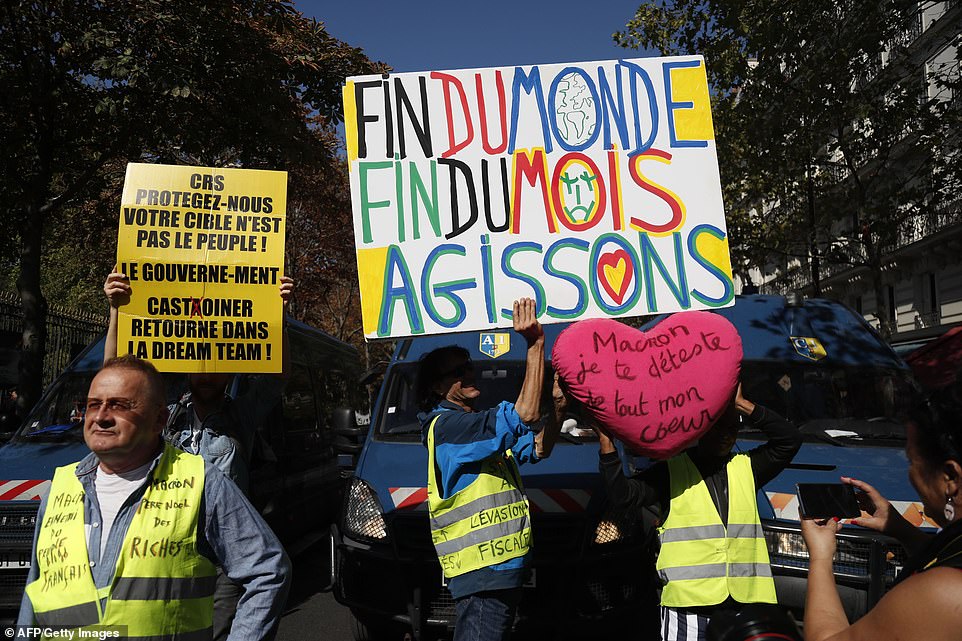 Authorities had been concerned that yellow vest protesters would meet up with climate change demonstrations today. Some people wearing high-vis jackets are pictured on the streets of Paris today 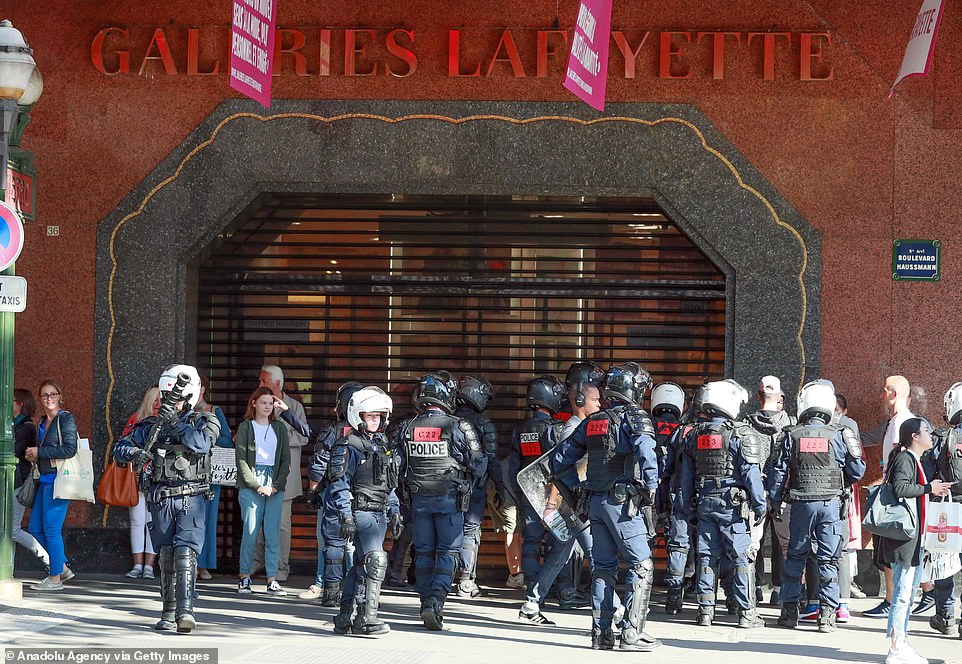 France’s annual heritage weekend is also taking place today and thousands of people are expected to be out enjoying the sites of the capital city. Paris police chief Didier Lallement has said 7,500 police would be deployed to cope with rallies 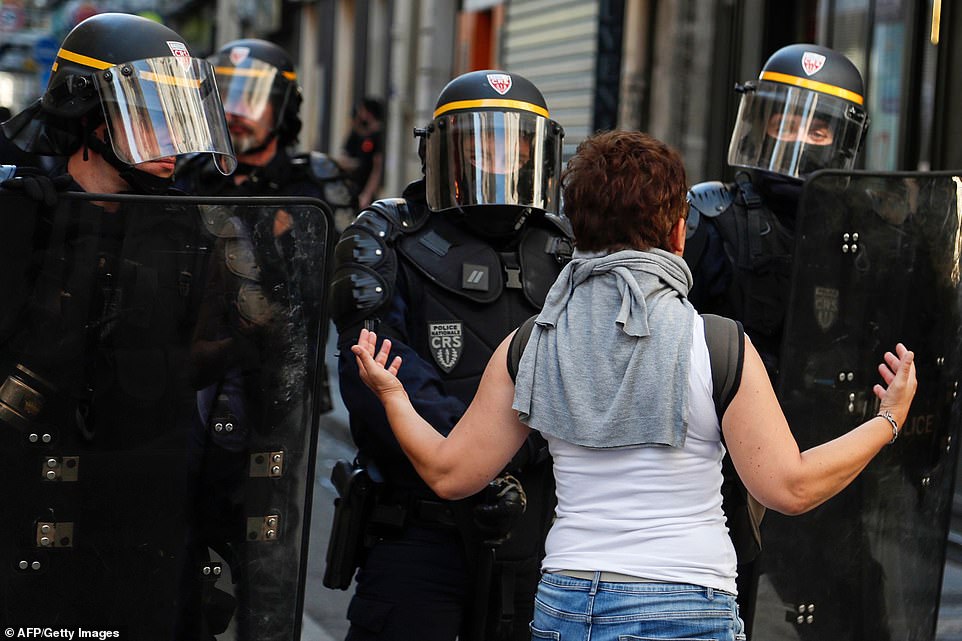 The hard-left Workers Force union is also holding a separate march against the retirement reform, amid concerns it will require people to work longer and reduce pensions.

The yellow vest movement erupted 10 months ago and blindsided President Emmanuel Macron, who protesters accused of being out of touch with the needs of ordinary French people.

Their weekly demonstrations prompted Macron to loosen the state’s purse strings to the tune of nearly 17 billion euros ($18.8 billion) in wage boosts and tax cuts for low earners, but tapered off over the summer.

Although fresh yellow vest rallies are planned today it remains to be seen whether the movement will regain the momentum of the winter and early spring, when the protests often descended into violent clashes with security forces, especially in Paris.

Macron on Friday called for ‘calm’, saying that while ‘it’s good that people express themselves’, they should not disrupt a climate protest and cultural events also due to go ahead on Saturday. 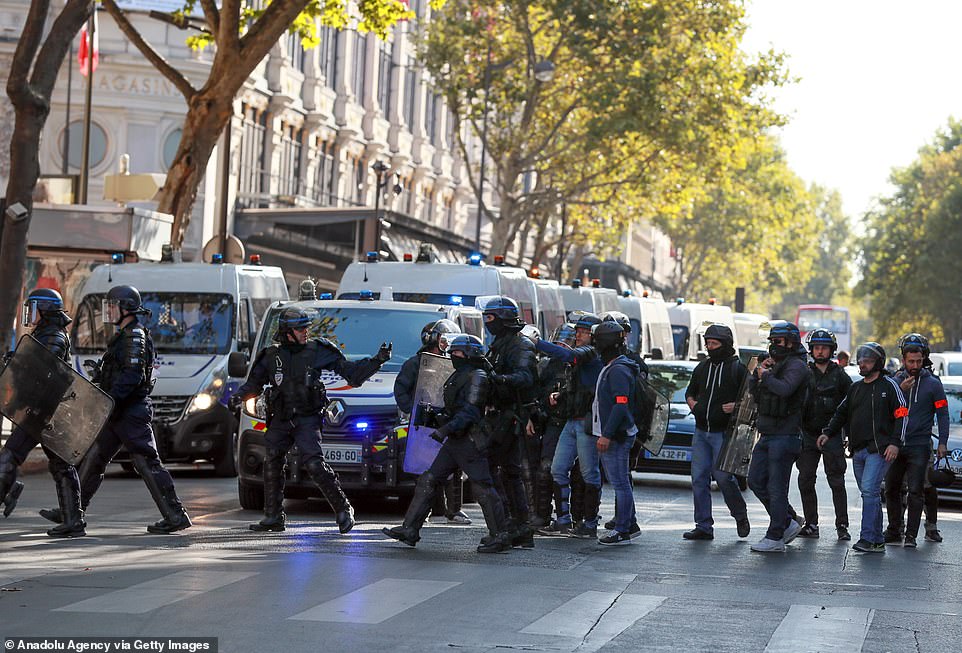 The yellow vest movement erupted 10 months ago and has caused President Macron to loosen the state’s purse strings to the tune of nearly 17 billion euros in wage boosts and tax cuts for low earners. Pictured are police in Paris today Paris police chief Didier Lallement has said 7,500 police would be deployed for Saturday’s rallies in Paris – numbers on a par with the peak of the yellow vest protests in December and March.

Key yellow-vest figure Jerome Rodrigues has billed Saturday’s protest as ‘a revelatory demonstration’, claiming ‘many people are going to come to Paris’.

The police have also been criticised for being heavy-handed in clashes with hardcore anti-capitalist ‘black bloc’ groups blamed for much of the violence that has accompanied the demonstrations.

After attracting 282,000 people nationwide on the first day of protests last November, yellow-vest protest participation had fallen sharply by the spring, and only sporadic protests were seen over the summer.

Macron said in an interview with Time magazine published Thursday that the movement had been ‘very good for me’ as it had made him listen and communicate better.

‘My challenge is to listen to people much better than I did at the very beginning,’ the president said.

Princess Margaret's affair with her 'toyboy' lover Roddy Llewellyn recreated for The Crown
How defiant £450million advertising tycoon Sir Martin Sorrell is bouncing back
Mother of twins who suffered from post-natal depression now competes in fitness competitions
New York driver 'panicked and crashed' her car into a stone wall because of a SPIDER
First-ever baby born to mom who had both of her fallopian tubes removed after having three children
Shocking footage shows thousands of dead bees after 7.1 magnitude earthquake struck California
Married billionaire Eric Schmidt's girlfriend says they'll have kids using frozen embryos
TALK OF THE TOWN: Princess Beatrice cancels her engagement party