The Patriots have released Antonio Brown after he was accused of sexual assault and he was dropped by Nike.

A statement from the team reads: ‘The New England Patriots are releasing Antonio Brown.

‘We appreciate the hard work of many people over the past 11 days, but we feel that it is best to move in a different direction at this time.’

Moments after the news broke, Brown tweeted: ‘Thanks for the opportunity appreciate @Patriots.’ 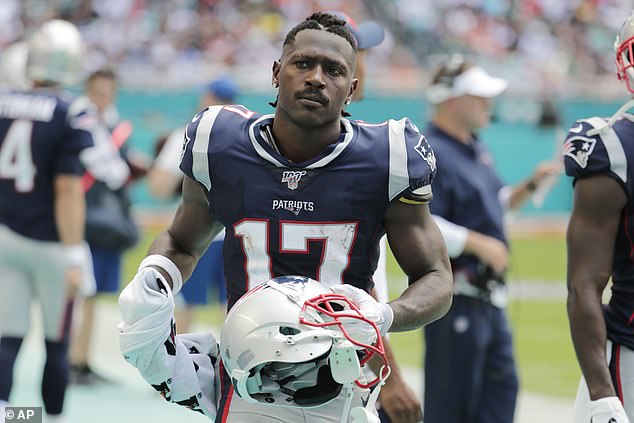 He follows this up with a tweet in quotation marks, which reads: “If I’m lying then I’m flying”, alongside a photo of him jumping into the crowd after he scored a touchdown during the only game he played for the Patriots.

He tweeted a picture of himself and head coach Bill Belichick along with the caption: ‘Thank you.’

He finally added in his own words: ‘The marathon continues.’

It comes hours after Belichick stormed out of a press conference on Friday after reporters repeatedly asked him about the latest allegations surrounding Brown.

The head coach opened Friday’s presser acknowledging the reporters’ desire to ask questions pertaining to Brown but added that he would not be commenting on those.

‘We take all the situations with our team very seriously,’ he said, ahead of the Patriots game against the New York Jets on Sunday. ‘There are some things we’re looking into. I’m not going to comment on any of the off-the-field situations.’

But the reporters would not let up on their questions, prompting the coach to become even more irritated. 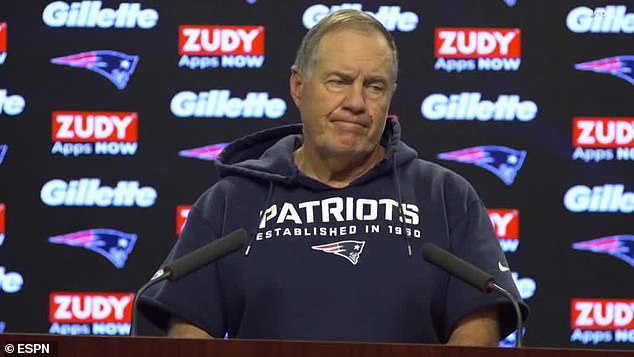 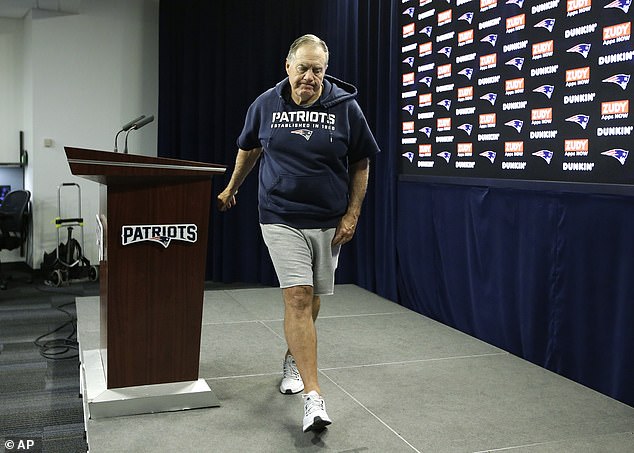 Reporters would not let up on their questions about Brown, prompting the coach to walk out

‘I think I have already addressed this so we are going to get ready for the Jets here,’ he asserted. ‘I’ll answer your football questions but the rest I am done with it.’

A reporter starts asking if ‘off-field stuff’ could contribute to issues the team could face in their game but the coach sees through the questions and storms off.

The latest news surrounding Brown involved a female artist who leveled claims earlier this week that Brown made unwanted sexual advances before firing her.

The artist came forward with her claims after Britney Taylor, 28, Brown’s former personal trainer, came forward to accuse him of sexual assault and rape.

Taylor says she was hired by Brown as a personal trainer in 2017 – alleging the first rape to have taken place in during a training session in June that year.

Taylor, a gymnast who first met Brown while they were both studying at Central Michigan University, says the 31-year-old ‘exposed himself and kissed [her] without consent,’ according to documents obtained by DailyMail.com.

It also comes after Nike Inc said it had cut ties with Brown.

‘Antonio Brown is not a Nike athlete,’ the company said in an e-mailed statement on Thursday. However, Brown’s Oakland Raiders and Pittsburgh Steelers jerseys were for sale on the Nike web site on Thursday morning.

Dog owner comes home to find her pooches have shredded all her pillows
Kimberly Guilfoyle speaks at Police Athletic League in New York
'Gut-wrenching' day as last Chevrolet Cruze comes off line at General Motors' assembly plant in Ohio
Elon Musk’s security clearance under review in response to his marijuana use on Joe Rogan's podcast
Schoolgirl was forced to cover up her MAGA clothing
Cuba Gooding Jr. reveals he was at the hospital with John Singleton when he died
Step forward Patrick Mahomes, the comeback kid, and America's new hero
Mother-of-one reveals her landlord asked her to spend the night when she said she couldn't pay rent