Winnie Harlow has come under fire for bemoaning flying economy class after her flight out of Milan Fashion Week was cancelled at short notice.

The Canadian supermodel, 25, took to Instagram on Wednesday to tell her followers she was forced to give up her business class seat, but needed to fly that evening because she had a ‘huge shoot at 6am’ on Thursday.

The former America’s Next Top Model star told fans she hadn’t slept in ‘four days’ due to the demands of a ‘hectic fashion month’, while posting an accompanying image of her sleeping in coach, wearing Prada with her shoes on the seat next to her. 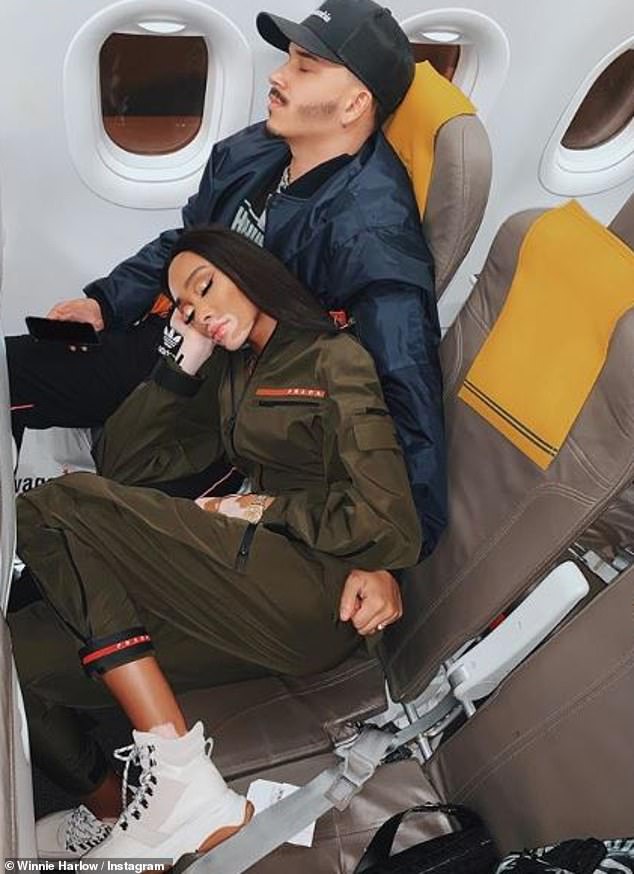 Coach class: Winnie Harlow has come under fire for bemoaning flying economy class after her flight out of Milan Fashion Week was cancelled at short notice

Winnie divided followers in the comments section, with some insisting ‘this really isn’t a big deal’ and asked if the predicament was ‘the biggest problem in her life’ while others praised the star for her candour.

The catwalk queen, who shot to fame in 2014 on the 21st cycle of America’s Next Top Model, had appeared at the Prada Milan Fashion Week show just hours before, and walked in numerous shows in London and New York over the past 10 days.

In the image, she was seemingly asleep on her friend’s lap while stretched out over two seats, with her shoes on the plane seat beside her – something that riled her fans – while she was also donning a Prada tracksuit.

She penned: ‘I haven’t slept in 4 days, and my flight got cancelled. The amazing airport escort got my team and I put on the fastest flight out but we had to give up our business class seats in order to land in time for a huge shoot at 6am… 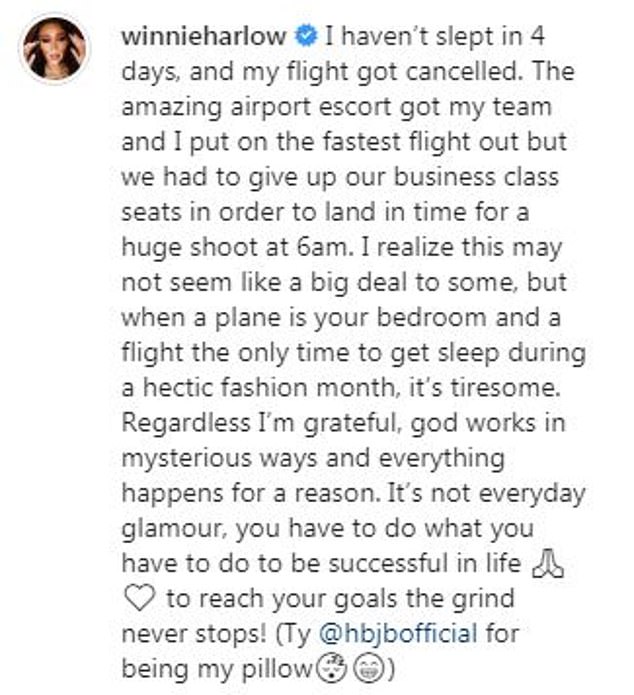 Essential: The Canadian supermodel, 25, told her followers she was forced to give up her business class seat, but needed to fly that evening because she had a ‘huge shoot at 6am’ 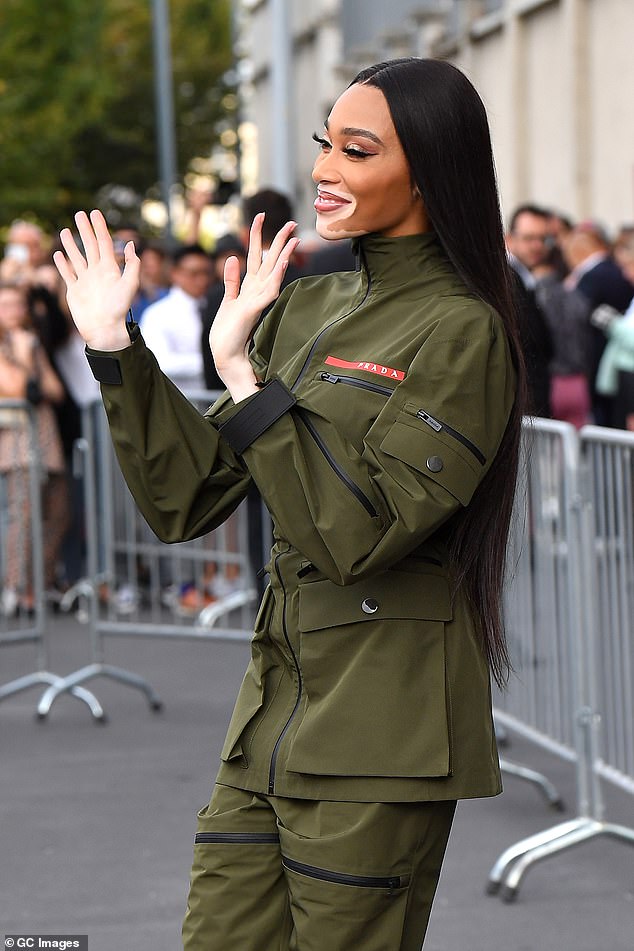 Tiring: The former America’s Next Top Model star told fans she hadn’t slept in ‘four days’ due to the demands of a ‘hectic fashion month’ (pictured at Prada hours earlier)

Pick up a pair of Prada trousers like Winnie

Shop this similar pair at Selfridges

She’s walked the runway for all the top designers but it’s Winnie Harlow’s off-duty style we can never get enough of.

The supermodel displayed her usual effortlessly cool aesthetic as she headed out and about in Milan, teaming a khaki Prada jacket with matching trousers, before finishing off with chunky trainers.

We love the utilitarian-chic vibes thanks to the zip pockets and khaki colour! If you’re a fan too, then click (right) to shop a super similar pair of Prada trousers over at Selfridges.

Or alternatively, emulate this look with the help of the high-street edit below. River Island, nasty Gal, Weekday and Asos have some great alternatives.

‘I realize this may not seem like a big deal, but when a plane is your bedroom and a flight the only time to get sleep during a hectic fashion month, it’s tiresome…

‘Regardless I’m grateful, god works in mysterious ways and everything happens for a reason.

She soon divided some of her 6.8million Instagram followers, who could not decide whether her predicament was worthy of her moaning status.

Some fans penned: ‘People ride in those seats everyday so this really isn’t a big deal but ok… Oh wow.. you poor thing.. did you buy that extra seat so you could put your feet up and not have to sit next to us regulars?… 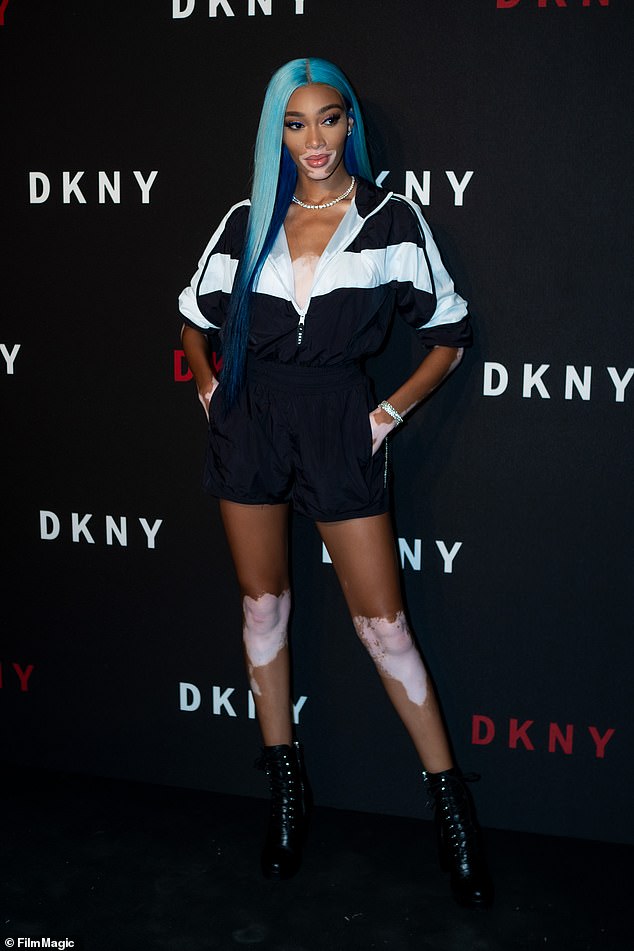 Shock: She discussed the struggles of her jetset lifestyle in the post which divided her fans

‘Also, very important you wear a Prada tracksuit to show people you don’t REALLY belong there… unreal… Ohhh I feel so bad for u.

‘U needed to give up your business class tix. That must be soooo hard… Is that the only problem you have in your life ??? Seriously… Lol *takes coach once *’.

Meanwhile, her supporters wrote: ‘ Y’all mad in the comments. But if she didn’t put the caption. 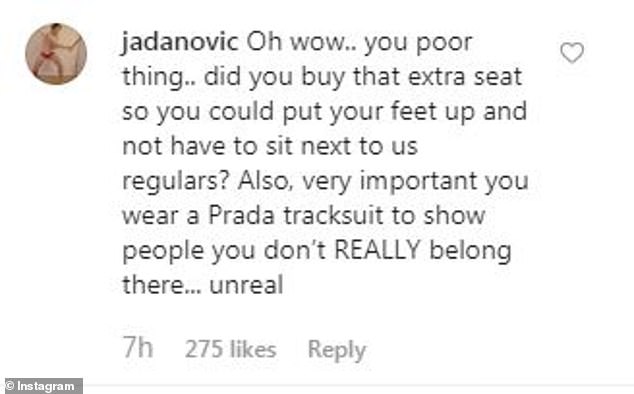 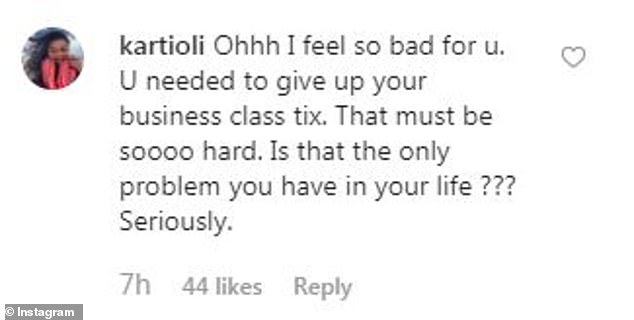 Divided: Fans were divided into two camps, with some throwing their support behind the star and others leaving sarcastic comments under her picture

‘Y’all would be saying ‘wow you’re not that rich/important/ well off where you could buy business class’ … but go off… You are the hardest working Supermodel.. I enjoy your posts Winnie.’

The model has had a busy fashion month so far; walking for numerous shows and attending parties, dinners and events.

Winnie has also been hard at work promoting her KKW beauty collaboration with Kim Kardashian, 38. 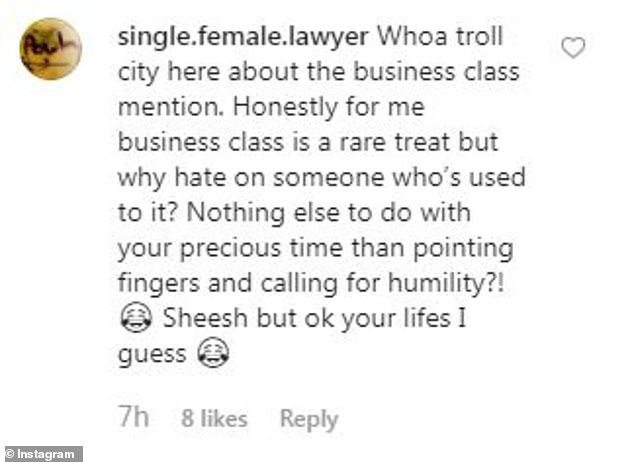 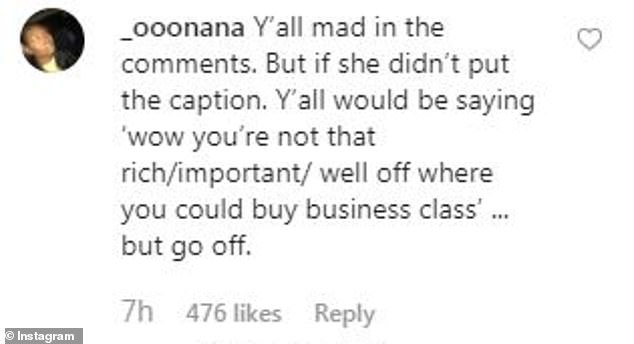 Supporters: It was not all beef, as some fans actively stood up for the model 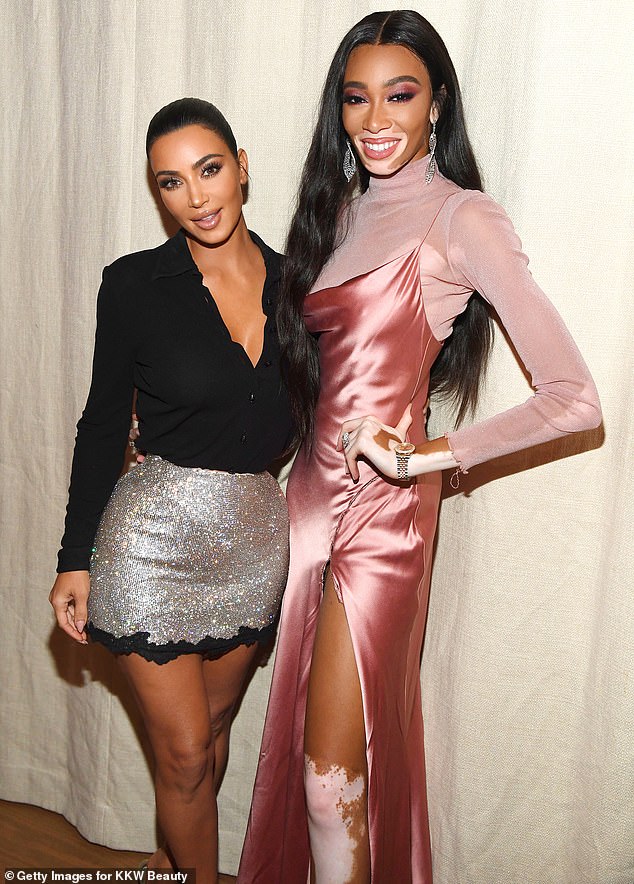 Busy bee: As well as the demands of fashion month, Winnie has been hard at work promoting her KKW collaboration with Kim Kardashian, 38 (pictured in New York on September 12)