passengers remain confused about whether they’ll be able to go on their planned holidays next Friday as flights remain cancelled despite pilots calling off the strike.

Yesterday the British Airline Pilots’ Association (Balpa) announced that it will not be striking as planned on September 27.

But the airline had already scrapped about 800 journeys amid the row over pay and conditions. 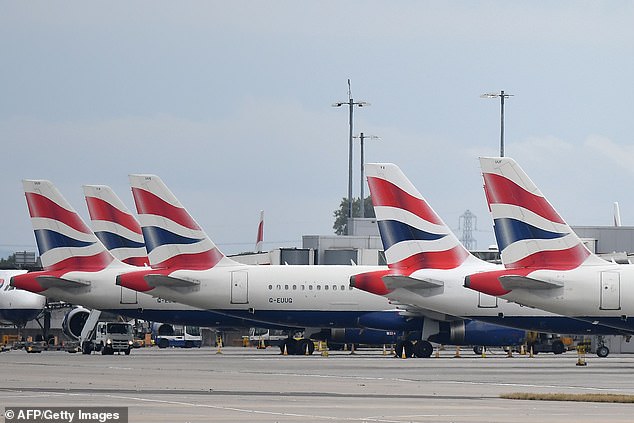 British Airways scrapped about 800 flights for a strike that has now been called off, leaving passengers confused as to whether they can switch back

Customers remain baffled about whether they can switch back to the flights they had originally booked after many were left swapping airlines.

They took to Twitter last night urging BA to reinstate the original flights for which flyers had paid.

When one Twitter user asked if she could have her original journey back on that date, the airline admitted it had no answers yet.

One woman tweeted: ‘If the strike is cancelled can I be transferred back to my original flight? I was transferred to another airline but I’d rather have my old flights back.’

Another said: ‘I really want my original flights back. They are so much more convenient.’

An account using the handle @RunnersKnees, whose user is planning to run the Berlin Marathon on September 29, was also baffled as to what he should do.

‘So given the BA pilots have cancelled their strike on Berlin mara weekend does that mean the flights are back on? Saw people having to rebook.’

And social media user Ria wrote: ‘BA cancelled strike. So does that mean you can change back to original flight if you rebooked on a less convenient one? #guessnot.’

Sardonic Traveler said that the ‘damage is done now’ and branded the pilots ‘money-grabbing’.

BA started cancelling flights and informing passengers last Thursday afternoon to avoid falling foul of EU laws that entitle customers to compensation if they receive fewer than 14 days of notice.

Under the same rules, the airline is not required to reimburse passengers for hotels and car hire.

Customers on cancelled flights will have either been refunded or rebooked on to a flight with a rival airline.