Israel remained in political deadlock tonight as a second election in five months failed to break the stalemate between Benjamin Netanyahu and his rivals.

Netanyahu’s Likud party was on 31 seats while challenger Benny Gantz and his Blue and White movement were on 32, with 90 per cent of results counted.

Neither has a clear route to a winning coalition in the 120-seat Knesset, raising the prospect of a unity government.

The stakes are especially high for Netanyahu, who is facing a corruption probe and may be unable to fend off criminal charges if he loses power.

The political crisis has forced Netanyahu to cancel a trip to the United Nations next week where he had hoped to meet his ‘friend’ Donald Trump. 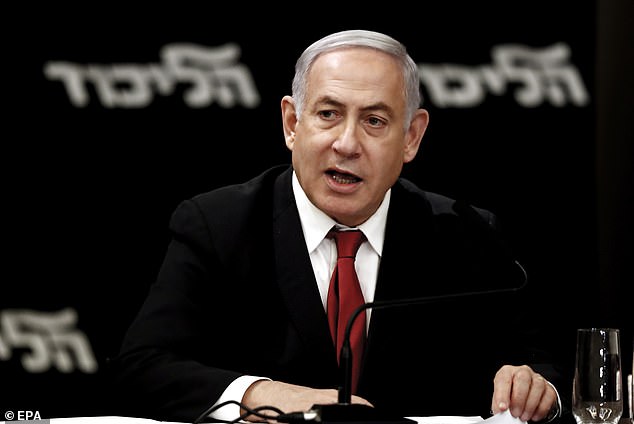 Benjamin Netanyahu (pictured) is hanging by a thread after he failed to win a majority in Israel’s second election of the year, leaving the country in stalemate

Israel’s longest-serving PM had borrowed tactics from the Trump playbook in the hope of winning a majority, lashing out at the media and alleging vast conspiracy against him.

Hoping to fire up his base, he made unfounded claims of fraud in Arab districts and launched a series of attacks on Israel’s Arab minority.

But the tactic appears to have backfired as turnout surged in Arab towns and helped to deny Netanyahu a majority.

The mainly Arab Joint List alliance was set to become the third-largest bloc in parliament with 13 seats, according to Israeli media.

‘There are only two options, a government led by me or a dangerous government dependent on the Arab parties,’ Netanyahu insisted in Jerusalem today.

‘In these times, more than ever, when we face enormous security and political challenges, it cannot be that there will be a government that depends on anti-Zionist Arab parties,’ he said.

Gantz, addressing supporters in Tel Aviv, called for a ‘broad unity government’ but cautioned that he was waiting for final results.

‘We will act to form a broad unity government that will express the will of the people,’ the former armed forces chief said. 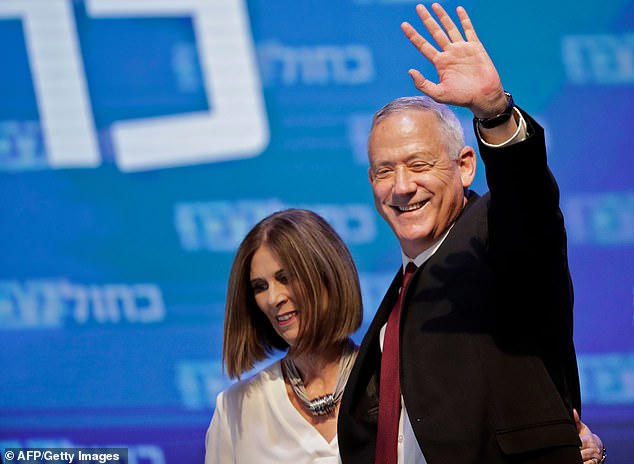 Gantz’s Blue and White party has signalled that it will not make a deal with Likud unless Netanyahu agrees to stand down.

But Netanyahu is desperate to cling to power as he faces possible corruption charges which could make him the first sitting Israeli PM to stand trial.

Israel’s attorney general has recommended indicting Netanyahu on bribery and corruption charges in a series of scandals, pending a hearing next month.

If he stays in power, his right-wing allies could agree to give him parliamentary immunity, but that now appears unlikely.

Some analysts have suggested a deal may be agreed in which Netanyahu steps down from public office for good in return for reduced charges.

Many Israelis have also grown weary of Netanyahu’s wife, Sara, and their oldest son, Yair, who have gained a reputation of behaving more like a royal family than public servants.

He has not declared in favour of either of the two leading contenders.

A former Netanyahu ally, Lieberman is a hawk on security issues but has long campaigned against what he sees as the undue clout of ultra-Orthodox parties.

Israel’s Arab parties have traditionally not endorsed anyone for prime minister.

‘The main difference in this vote is the turnout among Arab citizens,’ Joint List leader Ayman Odeh told journalists outside his home in the northern city of Haifa.

‘There’s no doubt that this is what made the difference. Without that, Netanyahu would already be prime minister.’

The election was the second in five months for Israel.

President Reuven Rivlin, who must appoint someone to attempt to form the next government, said there was a ‘need to avoid a third’.

Netanyahu suffered one of the biggest defeats of his political career after the previous elections in April.

His Likud along with its right-wing and religious allies won a majority, but he failed to form a coalition and opted for a second election rather than risk having Rivlin choose someone else to try.