No fashion show is complete without the holy trinity of models – Kaia Gerber, and her sister Bella.

Bella, 22, led the way in a sizzling lilac slip paired with a complimentary hat while she was flanked by her sister, 24, and Cindy Crawford’s lookalike daughter, 18, who donned near-identical ensembles in varying shades. 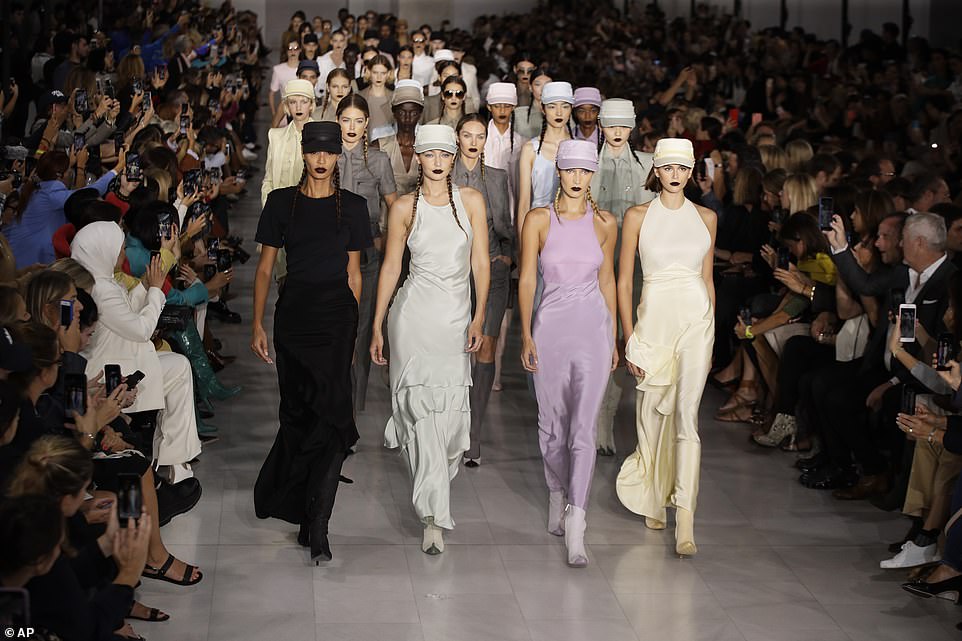 Wow! No fashion show is complete without the holy trinity of models – Kaia Gerber, Gigi Hadid and her sister Bella and on Thursday they appeared at the Max Mara Spring-Summer 2020 collection during Milan Fashion Week

The catwalk was illuminated by the trio in their matching ensembles, while they were also joined by Joan Smalls, who was sporting a similar dress to the ladies yet she went for black.

Bella’s striking features were enhanced with the addition of a bold black lipstick which stood out boldly against her alabaster complexion and newly bleached tresses.

Proving to be an all-star event, Bella, Gigi and Kaia were flanked by a host of other models including Joan Smalls, Candice Swanepoel and Doutzen Kroes who were giving their all to the show. 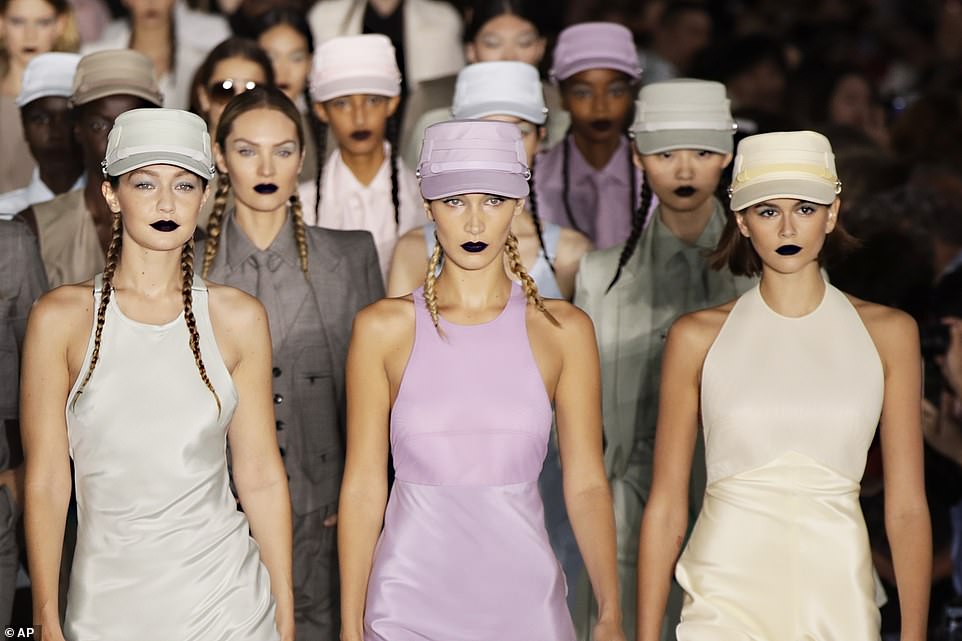 Wow: Bella, 22, led the way in a sizzling lilac slip paired with a complimentary hat while she was flanked by her sister, 24, and Cindy Crawford’s lookalike daughter, 18, who donned near-identical ensembles in varying shades

Sister, sister! The girls looked stunning as they strutted their stuff on the runway in their complementary looks 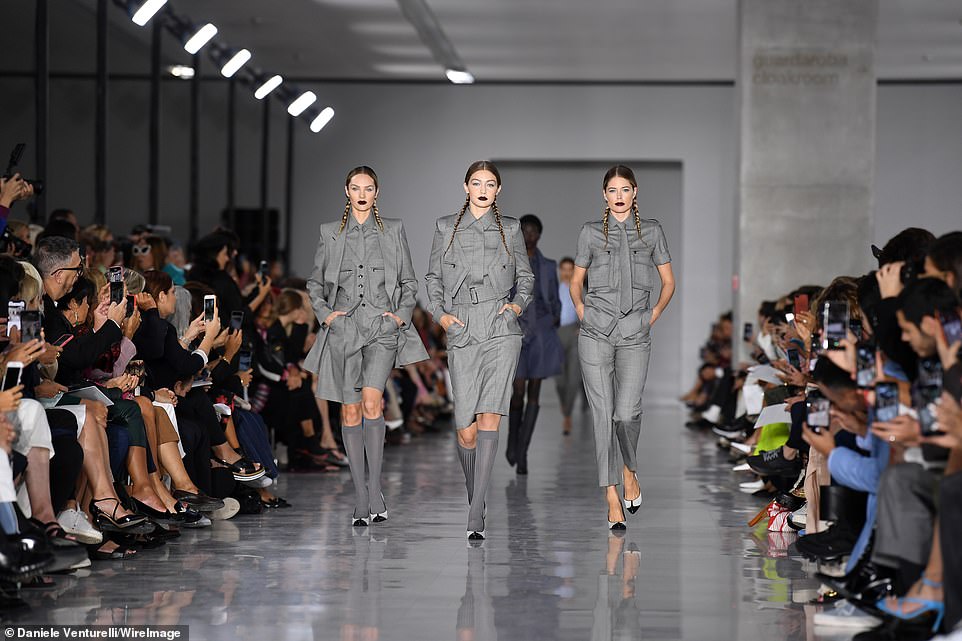 Changing it up: Gigi later walked alongside Candice Swanepoel and Doutzen Kroes (left-right) while donning preppy grey ensembles with a school uniform feel

The trio have been busy on all the hottest runways in what has no doubt been an exhausting stint following New York and London Fashion Weeks before now treading the boards in Milan. The trio all starred in the Burberry show back in London last week and stood out again at Michael Kors show during New York Fashion Week.

Gigi’s appearance comes after she has gone public with new boyfriend Tyler Cameron, with whom she has been growing increasingly close in recent weeks. Tyler was by Gigi’s side last week for the Rotterdam funeral of Gigi’s Dutch maternal grandmother Ans Van Den Herik.

The model, who have been dating around a month, were spotted arm in arm outside the service for van den Herik, who died late August after a long battle with cancer. Bella, brother Anwar Hadid and his girlfriend singer Dua Lipa also attended the service. Their mother Yolanda Hadid attended along with her new boyfriend Joseph Jingoli.

General contractor Tyler has reportedly been dating Gigi since July. The couple were first spotted canoodling on August 4 at the Soho House member’s only club Dumbo House in Brooklyn.

Gigi had been single since splitting from her on/off boyfriend of five years – former 1D boybander Zayn Malik – sometime in January. 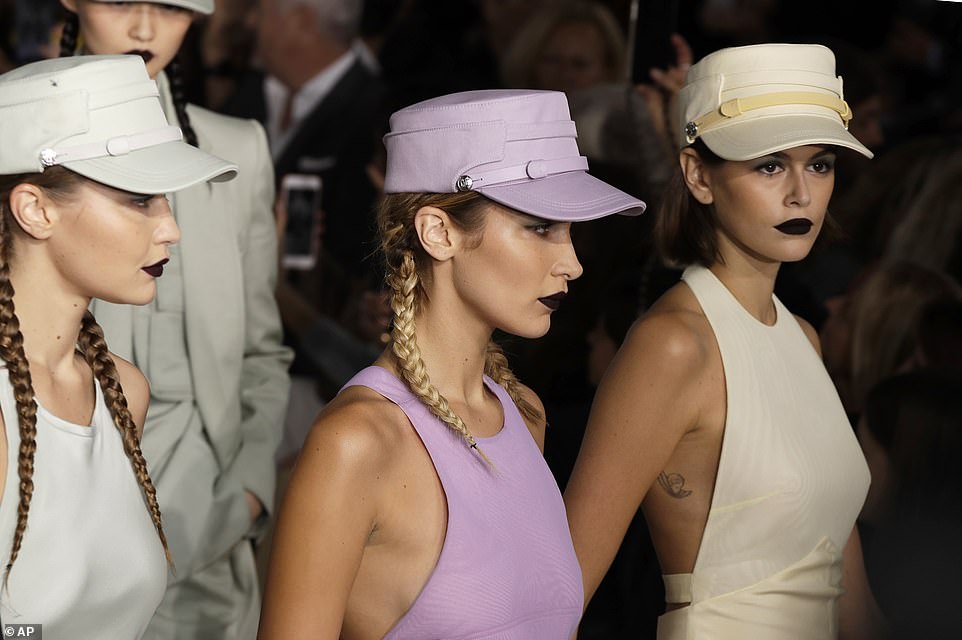 Here come the girls! The ladies pulled their very best model pouts as they headed along 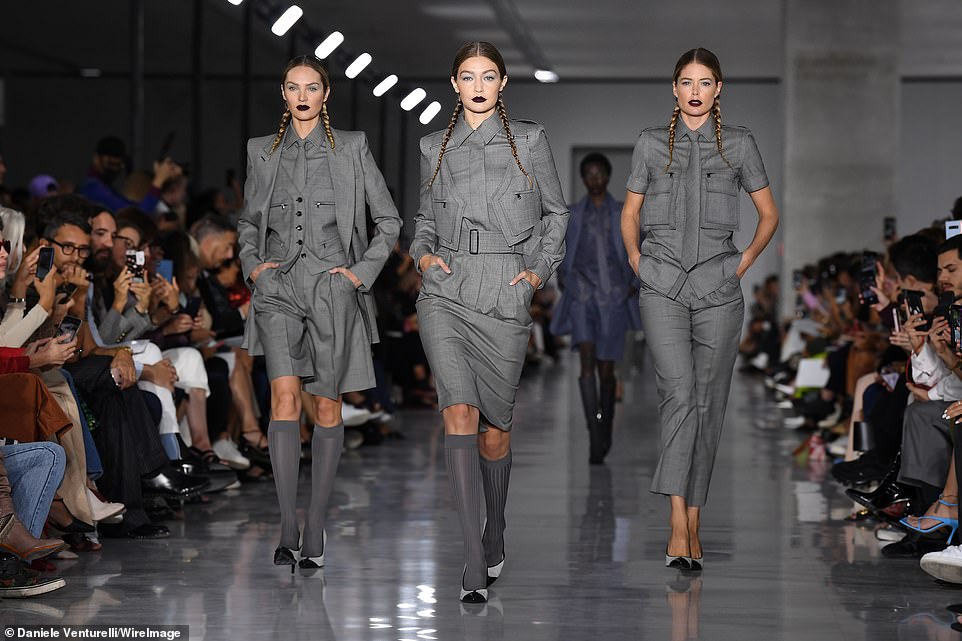 Changing it up: The ladies rocked grey knee-high socks which only added further to the school uniform look

A girl who can do both! The styles of the season were extremely contrasting – with structured tailoring standing alongside sizzling silk – with Kaia proving she can pull off both looks