Her gruelling six-month Phoenix World Tour came to an end over the weekend, after she performed for fans in Europe, North America, Asia and Australia.

And Rita Ora, 28,Hot Right Now was seen enjoying some much-needed downtime on Wednesday, when she stepped out in her hometown of London to run errands.

The Hot Right Now hitmaker nailed off-duty chic, stepping out in a patterned black minidress, which she teamed with a brooch-covered green checked coat. 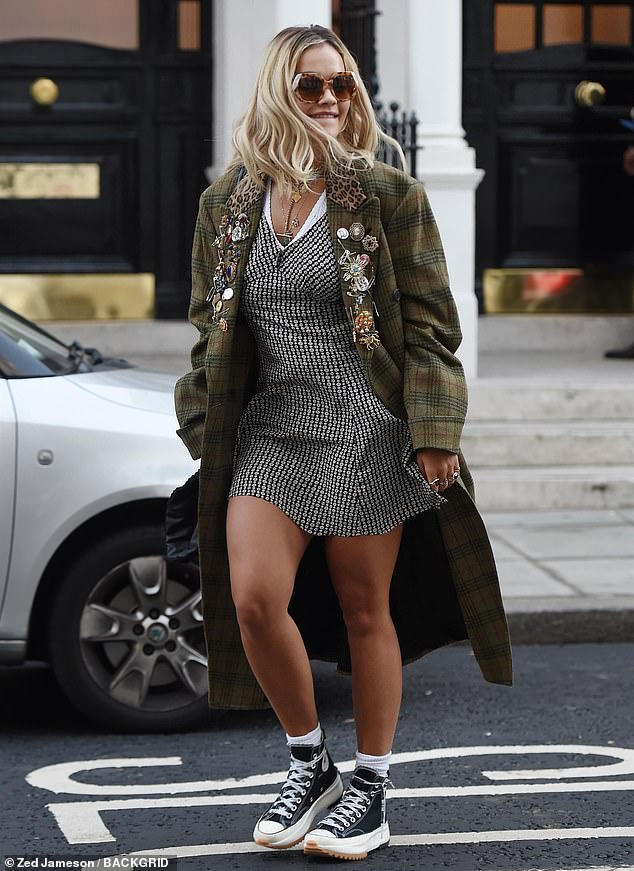 Out and about: Chart-topping singer Rita Ora was seen out and about in London on Wednesday

Boosting her height with a pair of black platform mid-tops, the Kosovo-born beauty shielded her eyes from the early autumn sunshine with oversized tortoiseshell frames, while a broad selection of chunky statement jewellery tied her look together.

Wearing her platinum tresses in tousled waves, Rita looked relaxed and happy as she got through her tasks for the day, which included a visit to her management’s office.

The star finished off her Phoenix World Tour, which started in March, in Paris, with performances at the French capital’s Westfield Velizy 2. 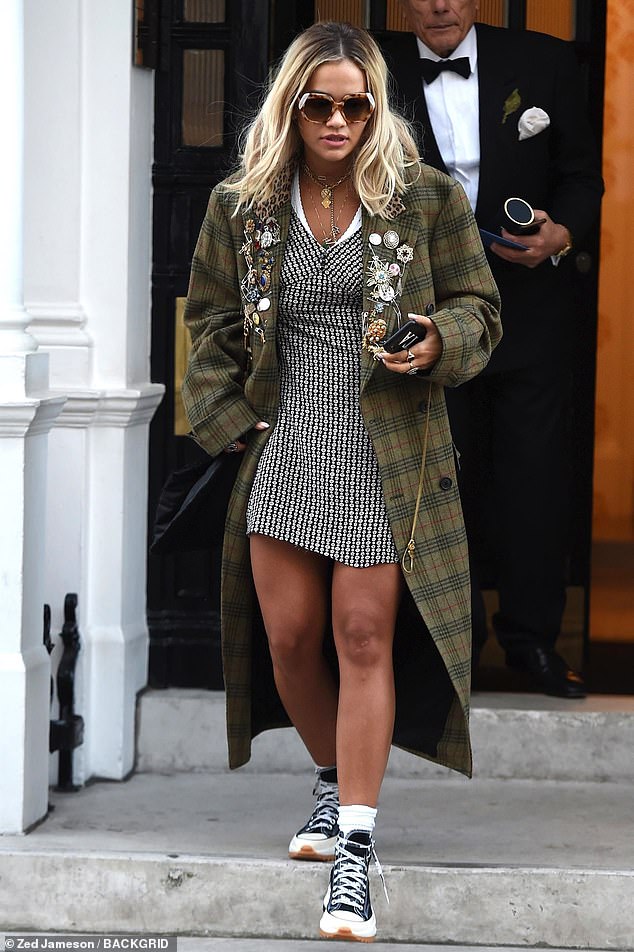 Off-duty chic: The Hot Right Now hitmaker nailed off-duty chic, stepping out in a patterned black minidress, which she teamed with a brooch-covered green checked coat

Away from the stage, Rita recently spoke to about her fluid sexuality and admitted she finds rumours she is dating every man she’s pictured with frustrating.

Speaking about her love life, Rita said: ‘I admire beauty from men and women. I see things as faceless and genderless, for me it is about the person.’

Rita, who has been confirmed to join the judging panel of new talent show The Masked Singer, previously released the song Girls which featured themes of bisexuality and self-love. 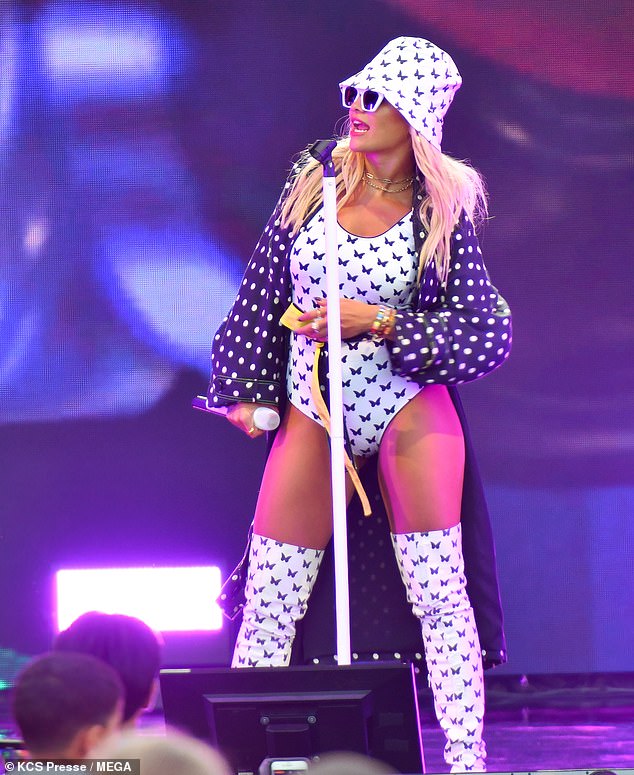 End of the road: Over the weekend, Rita wrapped her six-month Phoenix World Tour in Paris

She explained: ‘Girls was written to represent my truth and is an accurate account of a vert real and honest experience in my life…

‘I have had romantic relationships with woman and men throughout my life and this is my personal journey.’

The hitmaker also dismissed previous speculation she was dating singer Liam Payne after a series of steamy performances and insisted the pair are just good friends.

She said: ‘I have a lot of male friends, a lot of very attractive male friends, and they are my good friends. It doesn’t mean you have to be hooking up with them you know.’ 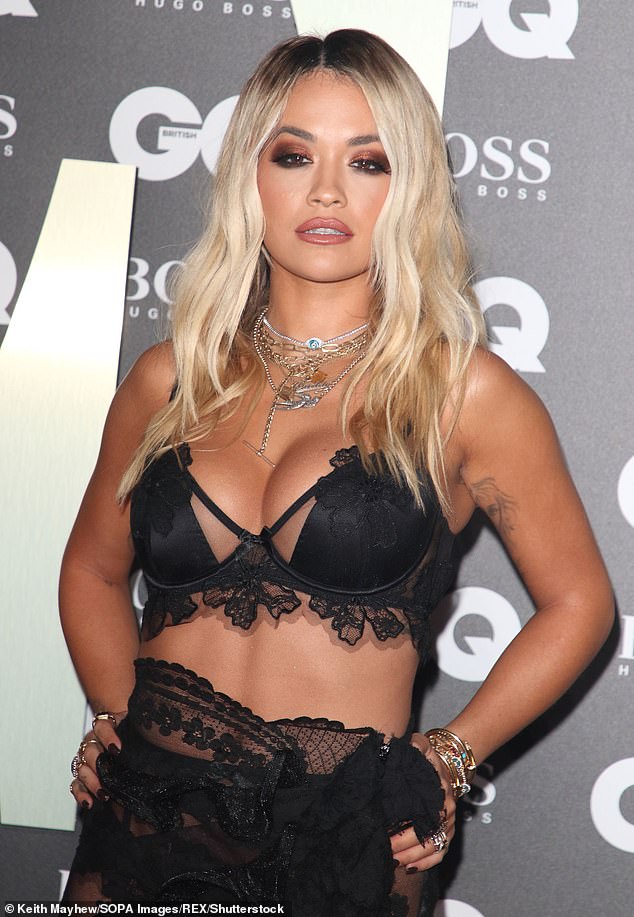 Candid: Away from the stage, Rita recently spoke about her fluid sexuality and admitted she finds rumours she is dating every man she’s pictured with frustrating. Pictured this month

Rosie Huntington-Whiteley enjoys family day out with Jason Statham and toddler son Jack
Kate Wright wears glasses and a simple black top in barely recognisable throwback snap
Paulina Porizkova say she's '54 and proud of it' adding she's had 'no fillers, no Botox'
IT: Chapter 2 trailer shows Jessica Chastain fearing for life while drowning and bloody Pennywise
Justin Bieber grins from ear-to-ear leaving a dance studio...as Yummy peaks at #2 spot on Billboard
Justin Bieber admits he was 'reckless' 'crazy' and 'wild' during his relationship with Selena Gomez
Mark Wahlberg, 48, gets an assistant to carry his haul of Louis Vuitton shopping bags
Harry and Sandra Redknapp reveal they haven't seen their grandchildren amid coronavirus lockdown