A broken-down Volvo was crushed when a lorry ploughed into it on a ‘smart motorway’ where the hard shoulder was being used as the slow lane.

Shocking pictures show the destruction caused to the rear of the vehicle after the smash on the M1 in the early hours of Tuesday.

The car was travelling on the southbound carriageway between junctions 29 and 28 in Derbyshire when it broke down on the hard shoulder, being used as a slow lane.

A blue HGV travelling behind it failed to see it in time and smashed straight into the back of the stranded car. No one was injured. 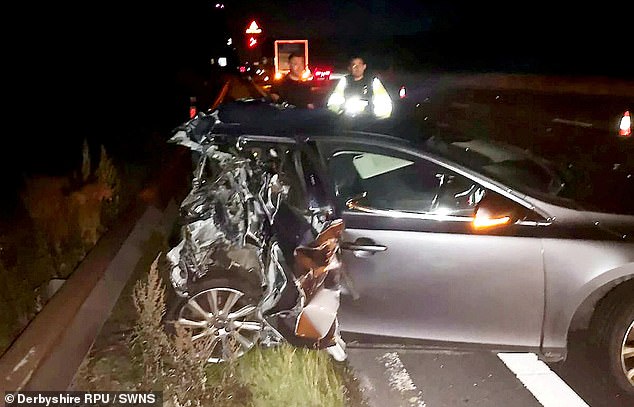 A broken-down Volvo was partially crushed, pictured, by a lorry after it stopped on the hard shoulder of the ‘smart motorway’ M1 which was being used as a slow lane

The force posted: ‘M1 South J29 to J28 overnight. Volvo breaks down in lane one. Lorry fails to see it and react in time and drives into it.

‘Good job there was no one sat in the back. Break down in a live lane? Get out, quickly, call 999.

‘This isn’t politics or victim blaming but a public safety message. Get out the car or suffer the consequences of others failings.’

Other drivers expressed their fury at smart motorways, branding them an ‘absolute death trap’.

Peter Walker wrote on social media: ‘Wow, they were very lucky. It’s bad enough breaking down and being on hard shoulder (was said to be the most dangerous place) but when no hard shoulder absolute death trap.’ 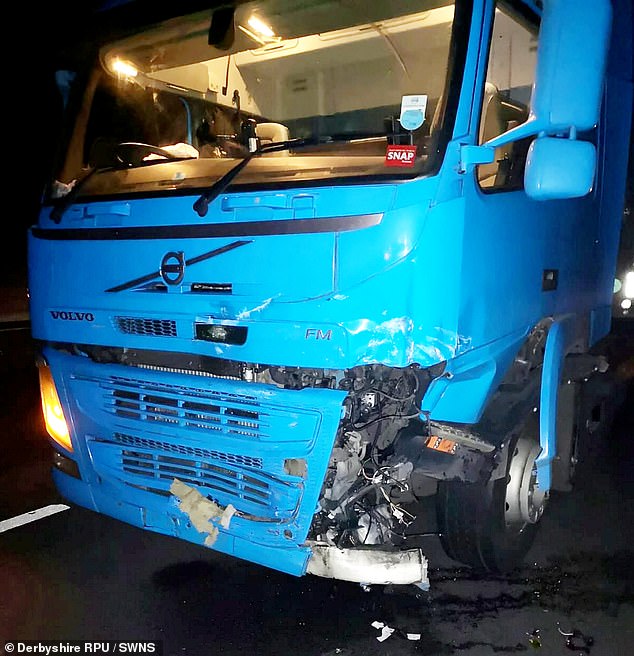 No one was injured in the crash and the lorry, pictured, ploughed into the back of the Volvo because it failed to see it was stationary

Katrina tweeted: ‘This is exactly why ‘smart motorways’ are the most stupid initiative ever! Just get rid and bring back the hard shoulder.’

Smart motorways have come in for heavy criticism since they were first introduced in 2006.

Four people have been killed on the M1 in just 10 months after being hit by traffic in a live lane that used to be the hard shoulder, according to reports.

The 3 types of smart motorway

Multiple lanes, variable speed limits and a hard shoulder for emergencies only.

Variable speed limits and a hard shoulder that can be turned into a fourth lane when needed.

Drivers are told via electric overhead signs to use the hard shoulder during peak hours.

Variable speed limits and a permanent fourth lane instead of a hard shoulder.

Fears have been raised over the accuracy of signs that say whether a hard shoulder is in use as a driving lane and a lack of safe areas to stop in case of a breakdown.

Richard Goddard, of the Campaign For Safer Roadside Rescue And Recovery, told the Mail on Sunday: ‘I think the motoring public will be flabbergasted and shocked to see the scale of the cash cow these smart motorways have become.

‘We fervently believe they are not safe. The refuge areas are too far apart. Motorists face the petrifying risk of breaking down in a live lane, many hundreds of yards from a refuge area with traffic barrelling down behind them.

‘At the very least, every penny generated by these cameras should be ploughed back into making these roads safer.’

Meanwhile a survey of drivers taken earlier this month revealed more than half of drivers don’t use all the live lanes available.

This is because more than half of drivers are unsure if they’re supposed to use a hard shoulder at the time or are simply concerned it won’t be safe, according to the study by Kwik Fit.

A quarter of those surveyed said they don’t use the left-most lane due to concerns that there may be a stationary vehicle ahead.

Another 24 per cent said they simply don’t think smart motorways are safe and therefore use them as they would a normal motorway with a hard shoulder.

Earlier this year, Matt Pates, the East Midlands regional traffic operations manager for Highways England, said hard shoulders were not a ‘hospitable’ place for drivers to be and .

In June, Jason Mercer, 44, and Alexandru Murgeanu, 22, were killed when a lorry ploughed into them after they pulled over to exchange contact details.

Mr Mercer’s widow, Claire, claims Highways England is responsible as it failed to provide her husband with a safe zone and plans to sue the government agency for corporate manslaughter.

WHAT ARE ‘SMART MOTORWAYS’ AND WHERE ARE THEY?

Smart motorways’ are supposed to ease congestion by allowing cars to drive on the hard shoulder at least some of the time, with traffic being monitored via cameras and ‘active’ speed signs.

Six more are under construction and another 18 are being planned.

However Highways England said a ‘comprehensive’ review of ‘smart motorways’ would be carried out after admitting lower limits were not always correctly set.

There are currently more than 20 sections of ‘smart motorway’ on seven different motorways, including on sections of the M25 and the M6

Jim O’Sullivan, chief executive, said that 40, 50 or 60mph limits were being set before congestion mounted on ‘smart motorways’ in England, using predictions about traffic levels.

Data has showed that 72,348 people were fined on motorways with variable speed limits last year. This was almost double the number a year earlier and a tenfold rise in five years.

Of those, two thirds of fines were handed out to motorists travelling at 69mph or below, even though the national speed limit is 70mph.

Highways England’s advice on driving on smart motorways includes a list of recommendations:

The Bachelor: Cat Henesey-Smith will get shut down by Nick Cummins
Construction worker, 23, miraculously survives after four story fall
Lea Michele showcases lean legs in black yoga pants while grabbing coffee in Los Angeles
'Small Island' author Andrea Levy dies of cancer aged 62
Bookmakers see a late flurry of bets on a male Baby Sussex
All shot up! Gun bought by Elvis Presley after Las Vegas crowd attacked him set to fetch £15,300
MMA fighter breaks her rival's NOSE with a vicious headbutt
DAN HODGES: Why does the Left hate Priti Patel so much?