Brexiteers today stepped up their attacks on Luxembourg PM Xavier Bettel in the wake of his extraordinary snub to .

Tories raged that Mr Bettell had forgotten that Britain ‘saved’ the tiny nation after it was occupied by the Nazis in the Second World War.

The backlash came after Boris Johnson’s trip to Luxembourg for talks was overshadowed by a calculated insult from his host.

Mr Bettel – whose country has a population of just 600,000 and an economy half the size of the budget – first refused to move a joint press conference with Mr Johnson indoors to prevent the British PM being ‘drowned out’ a small but noisy protest.

Instead he continued with the media call solo, delivering a furious anti-Brexit rant against the backdrop of a Union flag, while gesturing at the empty podium set up for Mr Johnson. 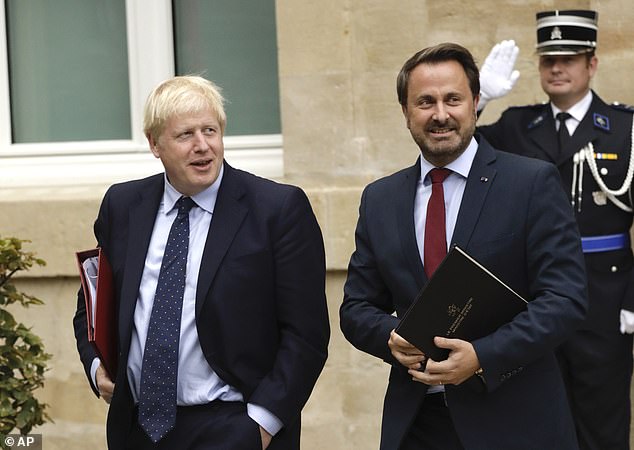 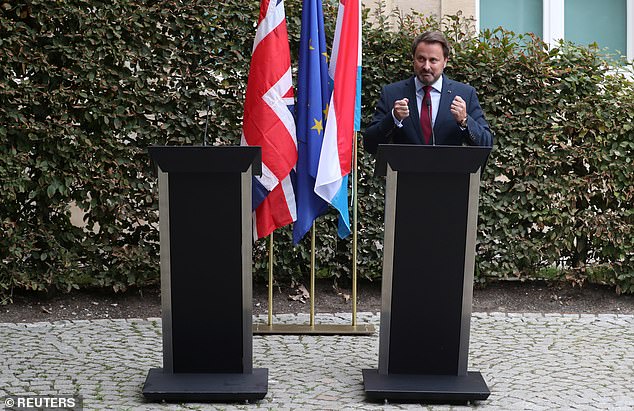 After refusing to move a press conference away from noisy protests, Mr Bettel delivered a furious anti-Brexit rant against the backdrop of a Union flag, while gesturing at the empty podium set up for Mr Johnson (pictured) 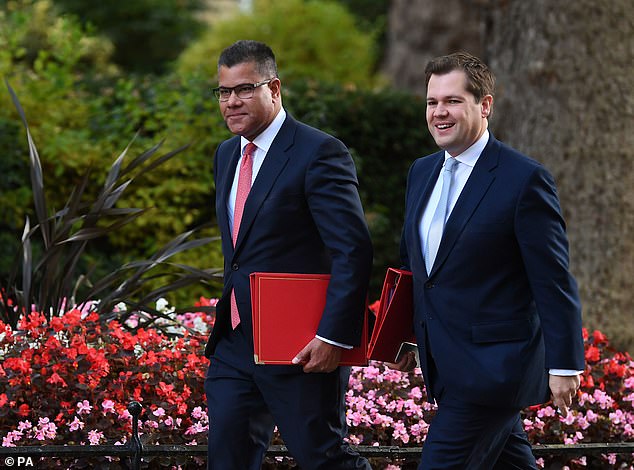 Mr Bettel branded Brexit a ‘nightmare’ and warned the ‘clock is ticking’ for Mr Johnson to bring forward new proposals – saying the EU would not be to ‘blame’ if the UK ended up crashing out without an agreement.

The PM attempted to make light of the row, saying it would not have been ‘fair’ to Mr Bettel to continue with the joint event as ‘there was clearly going to be a lot of noise and our points would have been drowned out’.

He gathered his Cabinet today to update them on progress in the wrangling with the EU, which also included a crucial lunch meeting with commission president Jean-Claude Juncker in Luxembourg. The two men agreed to step up talks to a daily basis, and Mr Juncker described them as ‘negotiations’ for the first time.

Who is Xavier Bettel?

Xavier Bettel has been the prime minister of Luxembourg since 2013.

He has been a vocal critic of Brexit and the amount of time it has taken the UK to set out the terms on which it wants to leave the EU.

Speaking in the run up to the original March 2019 Brexit deadline, he said: ‘We don’t force the United Kingdom, you decided to leave, we shouldn’t exchange roles.

‘We have to just find a deal and we negotiated the deal, we found the best possible deal and we are not in a souk where we are going to bargain for the next five years.’

The 46-year-old is married and in 2018 he became the first openly gay PM in the world to be re-elected for a second term in office.

He previously served as the Mayor of Luxembourg City between November 2011 and December 2013.

He then led the Democratic Party into Luxembourg’s national elections in 2013, finishing third.

However, he was invited to form the next government and became PM, leading a coalition of the Democratic Party, Luxembourg Socialist Workers’ Party and The Greens.

The government remained a rainbow coalition after elections last year.

But Tory MPs from both Remain and Brexit wings voiced anger at the Mr Johnson’s treatment.

Former Cabinet minister Iain Duncan Smith said leaders had a duty to show ‘courtesy and civility’, and pointed out that Luxembourg was liberated from German occupation by Allied forces.

‘The irony is that Luxembourg was saved by Britain. National leaders should always treat one another with courtesy and civility. Good ones do,’ he told the Telegraph.

Former Brexit minister David Jones said: ‘If Remain supporters are revelling in this gratuitous rudeness to a British Prime Minister, they should examine their own motives.

‘Most patriotic people would say it’s another good reason to leave on October 31.’

Sir Nicholas Soames, who was expelled from the Tories for rebelling over the law against No Deal, accused Mr Bettel of ‘unhelpful grandstanding’.

‘Very poor behaviour by Luxembourg. Boris Johnson quite right not to be made a fool of.’

Mr Bettel told Mr Johnson that protesters, who heckled the British PM as he arrived at the meeting, would be ‘respectful’ during the press conference.

Officials said Mr Bettel had also refused a request to remove Mr Johnson’s lectern and Union flag before starting the press conference, leaving it to look like the British PM had simply refused to turn up. One Government source said: ‘Friends don’t behave like this.’

Another pointed out that Mr Johnson only agreed to see Mr Bettel as a ‘courtesy’ after European Commission chief Jean-Claude Juncker asked to move a planned meeting from Brussels to Luxembourg. ‘It was a stitch-up,’ the source said. ‘But let’s see what other EU leaders make of this behaviour.’

The row threatened to overshadow talks between Mr Johnson and Mr Juncker in a Luxembourg restaurant. 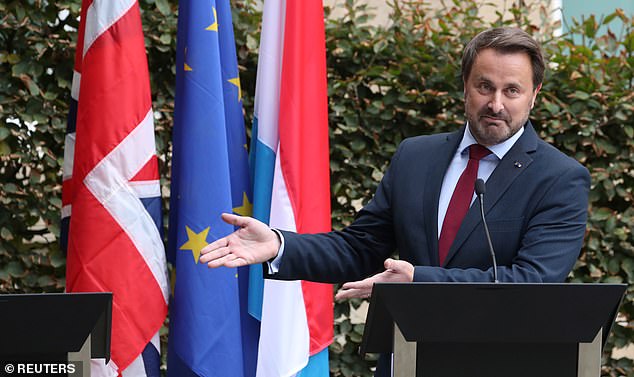 In a brutal assault Mr Bettel said the ‘clock is ticking’ to get a deal and insisted: ‘We need more than just words’ 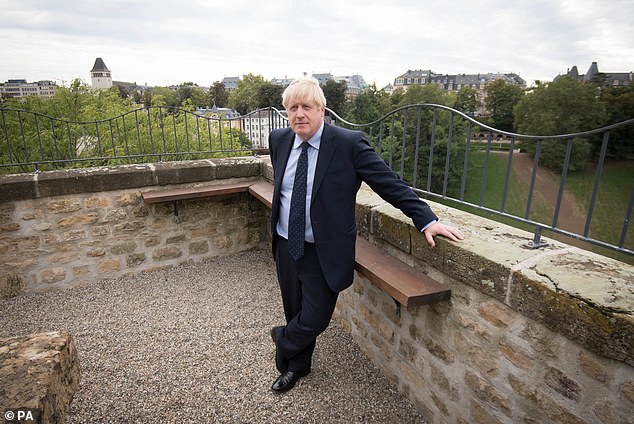 But a senior Government source last night issued a downbeat assessment of the prospects for a deal following those talks, saying: ‘It’s clear Brussels is not yet ready to find the compromises required for a deal so No Deal remains a real possibility – as the gap we need to bridge remains quite large.’

Xavier Bettel sparked an extraordinary public spat with Boris Johnson yesterday after refusing to move a press conference away from protesters.

The Luxembourg PM accused Mr Johnson of holding the future of UK and EU citizens ‘hostage for party political gains’.

Gesturing to the empty podium where Mr Johnson should have been, Mr Bettel said: ‘Now it’s on Mr Johnson – he holds the future of all UK citizens and every EU citizen living in the UK in his hands.

‘It’s his responsibility. Your people, our people, count on you – but the clock is ticking, use your time wisely.’

Mr Bettel, answering questions from reporters, said: ‘For me I just have one Withdrawal Agreement on the table and it’s the one from last year.

‘There are no changes. There are no concrete proposals for the moment on the table. And I won’t give an agreement to ideas. We need written proposals and the time is ticking.’

Mr Bettel told Mr Johnson to ‘stop speaking and act’, adding: ‘But we won’t accept any agreement that goes against a single market, who will be against the Good Friday Agreement.’

He said: ‘This Brexit it’s not my choice.

‘It’s been a decision from a party, a decision from David Cameron to do it. They decide, I deeply regret it but don’t put the blame on us because now they don’t know how to get out of this situation.’

Mr Bettel said the EU side would not be responsible if the two sides were unable to reach agreement on a new Brexit deal.

‘Some people would love to give the blame to another and not be responsible for the situation,’ he said.

‘Theresa May accepted the Withdrawal Agreement. So don’t make it like the European Union is the bad guy not accepting decisions the UK proposes. They accepted them.

‘These are home-made problems. I won’t accept any time to be responsible as a European leader… for, I am sorry, the mess we are in for the moment.’

Mr Juncker and Mr Johnson held a two-hour working lunch in fine-dining restaurant Le Bouquet Garni, just five-minutes from the Ministry of State, where the Prime Minister met Mr Bettel and where the joint press conference was due to take place.

The 18th-century dining spot is located in the heart of medieval Luxembourg and the menu was changed at the 11th-hour for the pair.

They were originally supposed to eat snails, salmon and cheese, but instead feasted on pan-cooked chicken oysters, butter-roasted pollock with creamy risotto, then red and black berries, iced marshmallow and basil sorbet.

After the two-hour lunch – the first face-to-face meeting since Mr Johnson became PM – Mr Juncker told reporters it was a ‘friendly meeting’, adding: ‘Negotiations will continue at high speed.’

Privately, officials said the UK was unlikely to publish formal proposals ahead of the Conservative Party conference at the end of this month, when Mr Johnson will be anxious to avoid giving the impression he is considering further compromise.

Sources pointed to the long history of the EU leaking British proposals in order to discredit them.

Mr Johnson yesterday acknowledged the EU was ‘still officially sticking on their position that the backstop has got to be there.’ In an interview with the BBC, he said a deal was only possible if there is ‘movement from them on that crucial issue’.

And he suggested a key part of his plan is ensuring that Northern Ireland has a democratic lock on any move to keep it tied more closely to the EU than the rest of the UK.

Mr Johnson warned that failure to resolve the backstop would mean ‘we’ll have an exit with No Deal on October 31’, adding: ‘That’s not what I want. It’s not what they want. And we’re going to work very hard to avoid it. But that’s the reality.’

A Luxembourg government official acknowledged that the UK had asked to switch yesterday’s press conference indoors because of ‘concern about noise levels’.

But the source said there ‘wasn’t enough room’ indoors to accommodate all the journalists who had attended the event.

Rory McIlroy and Sergio Garcia pair up for four balls on day two of Ryder Cup
BBC to put 100 box sets including Bodyguard and McMafia back on iPlayer
Yes, you really CAN beat heart disease:
Britain's biggest charity the Wellcome Trust drops plans for a four-day working week
Nigel Farage sips champagne at the Polo with Georgia Toffolo after 'costing Tories by-election win'
Firefighters rescue 'idiot' father, 43, who got stuck in a 15-inch storm drain
Are smart meters leading to higher energy costs for rural homes?
Commuters in India squeeze onto buses while police in Nepal arrest lockdown flouters