A mountain rescue team was called out to save a tired dog who refused to carry on his walk.

The nine-year-old terrier would not budge at the end of a ‘long wet day’.

The unnamed owner tried to carry the dog but he proved too heavy and the man was forced to call for help. 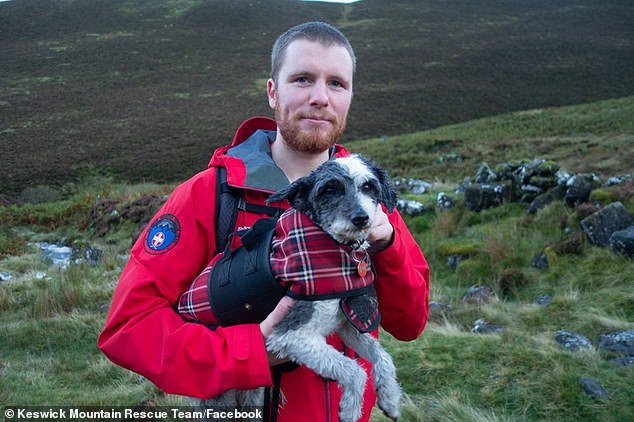 The pair took refuge in a wooden hut until the team of six volunteers and one search dog got to them on a stretch of the Cumbria Way in the Lake District and took them to their accommodation in Caldbeck.

Keswick Mountain Rescue, which carried out the operation last Thursday, said: ‘With visions of Great Danes and Rottweilers and the possibility of having to call more team members to stretcher the dog off, the team were pleased to find a small and easily portable, cold, shivering terrier.’

It took more than two hours for six team members and one search dog to rescue the man and his dog. 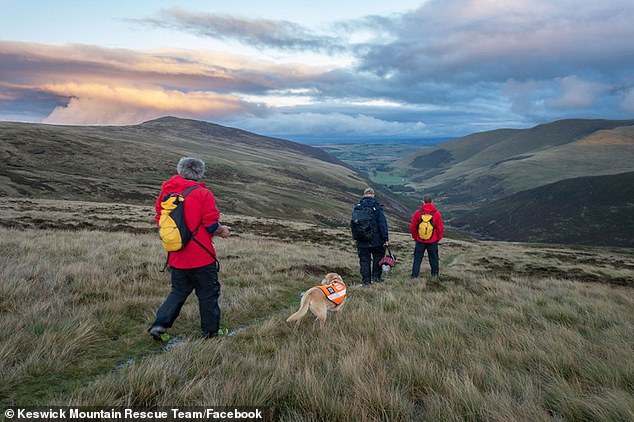 The exhausted terrier was carried in a harness back down the hill.

A car waiting below then drove the pair back to their accommodation in Caldbeck.

Rescuers’ work was praised online, with Rachel O’Brien writing on Facebook: ‘This lovely outcome could so easily have been different if they hadn’t had help from mountain rescue.

‘Cold, wet and tired could easily mean hypothermia for man and dog and I’ve got a 10kg dog so know how heavy that is to carry even for a short distance.’

England 12-11 South Africa PLAYER RATINGS - Autumn Internationals 2018
Children In Need: Boyzone's Shayne Lynch WINS Strictly Come Dancing special
Life on Mars is NOT out of this world!
Actress reveals for first time how youngster she met in Africa 15 years ago 'calls her mum'
Ex-Liverpool Stephen Darby on motor neurone disease diagnosis and effect on wife Steph Houghton
Ballot box warrior Lord Buckethead rebrands as Count Binface
Who Wants To Be A Millionaire player who won £500, 000 says helping his family is 'best bit'
China tells US to close its consulate in Chengdu after Trump closed Chinese consulate in Houston