It’s the kind of spooky tale salty sailors might share on a stormy night – that of the abandoned boat that followed its owner home.

It involves a 24ft ocean rower assumed lost more than a year ago when a Scots adventurer was forced to halt his attempt at a solo Atlantic crossing.

Yet 48 hours ago, the vessel, named Alba, washed up on a beach close to the place he had been heading for – and on the island that was home to his ancestors. 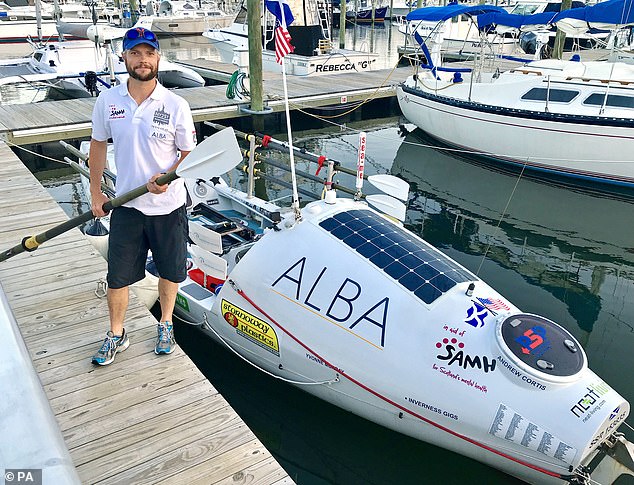 Niall Iain Macdonald, 45, was rescued 880 miles into his third attempt to cross the US coast to the Isle of Lewis due to stormy weather and wasbeen given the shock of his life afterhis boat washed up on a beach at Askernish in South Uist, his mother’s ancestral home

Gaelic broadcaster Niall Iain Macdonald, 45, had been making his third attempt in four years to cross from the US coast to the Isle of Lewis when he got into difficulty in stormy seas 880 miles into his journey and had to be rescued. At the time he described the drama as ‘harrowing’.

On Thursday, Alba washed up on a beach at Askernish in South Uist, his mother’s ancestral home, less than 100 miles from his own home in Stornoway, on Lewis.

Mr Macdonald said: ‘I was shocked when I heard that my boat had been found, and even more surprised that she had come ashore on the beach in South Uist, where my mother is from.

‘I am amazed it made it home. At the end of October, the tracker signal either stopped or got knocked off. 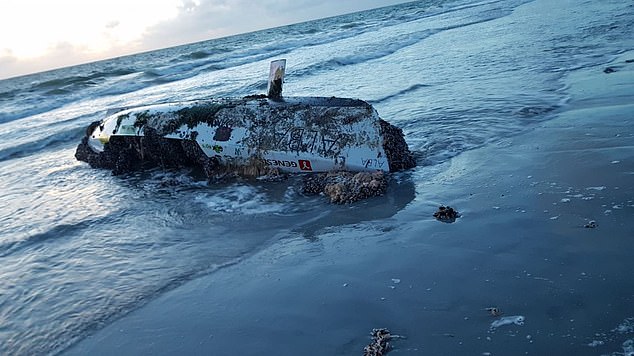 He says the boat is covered in goose barnacles and not in a good shape (pictured). Macdonald had hoped to raise £100,000 for the Scottish Association for Mental Health and to highlight mental health issues by rowing 3,400 miles in three months

‘It was going around in loops of the Grand Banks [of Newfoundland] at the time.

‘It has a lot of goose barnacles on it and other damage. I have mixed emotions. I am glad it has been found but sad to see it in the state it is. It is not nice to look at.’

Mr Macdonald said the damage suggested that the boat had washed ashore elsewhere first. He added: ‘I always knew that if it turned up it would not be in a good way. It’s all a bit strange what has happened. I’m still trying to come to terms with it.

‘Not only is it less than 100 miles from where I live in Stornoway, I also have very strong family connections with Askernish as that is where my granny was from and my late mum was brought up close by in Daliburgh.

‘She was a great ocean rowing boat and so many people in the Stornoway community helped me get her ready for my challenge.’

Mr Macdonald, who is weighing up another bid to row the Atlantic, plans to travel to South Uist to make arrangements to take the boat back to Stornoway. 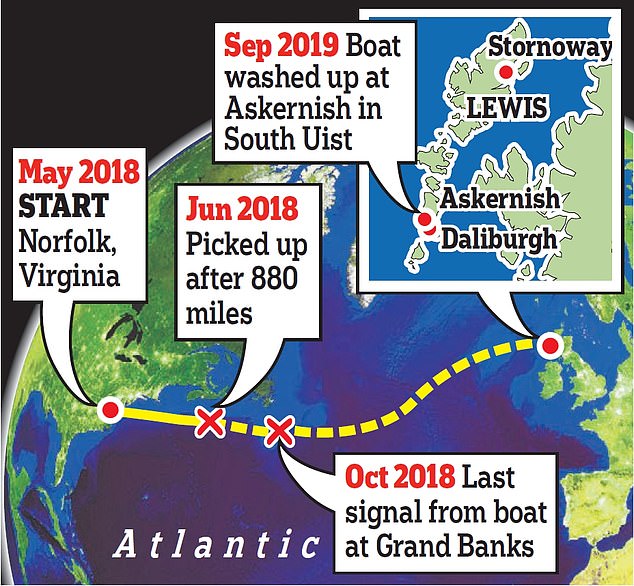 He says he is ‘still trying to come to terms’ with how the boat managed to travel from just off the coat of Norfolk, Virginia to Scottish Island Askernish in South Uist – in just over one year

He had hoped to raise £100,000 for the Scottish Association for Mental Health and to highlight mental health issues by rowing 3,400 miles in three months.

He said of his ghost vessel: ‘She almost made it home.’

Queues round the block for Boris Johnson's Tory conference speech
Rescuers search for missing plane in South Carolina
Boris Johnson gives Jeremy Corbyn ultimatum for cross-party deal to fix dementia care crisis
Napoleon Bonaparte's descendent marries the great-great-great niece of French Emperor's wife
Fish oil supplements could be 'as good as drugs' for treating some cases of ADHD
Britain has hit its 'taxable limit', a former minister warns the Government
Rhys Jones's killer Sean Mercer is pictured for the first time since he was jailed
Duchess of Cornwall tells of her love for rescue dogs Beth and Bluebell in radio interview