Verdict: A story of naked greed

After her prolific early career, doesn’t appear in many films these days. But this is not the week to observe that we don’t see much of her, because in Hustlers we see most of her.

It is a film inspired by a true story, about a bunch of stripper/prostitutes who prey on wealthy customers, drugging the men and fraudulently using their credit cards.

Lopez is terrific, and while I can’t claim to be an expert, it’s hard to imagine even a professional pole-dancer looking more at ease astride a pole. 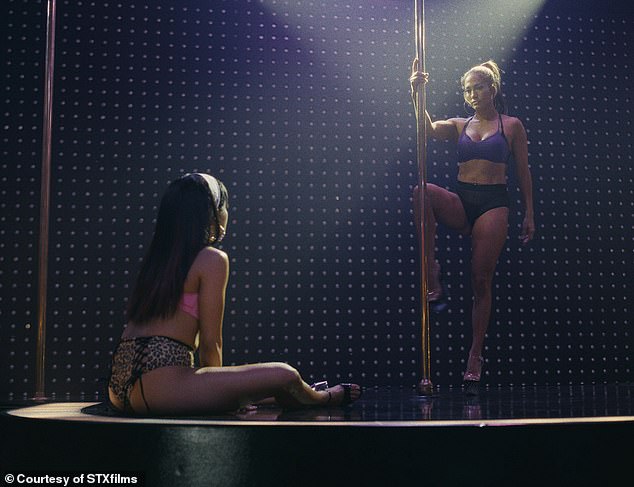 Jennifer Lopez (pictured right) plays a pole-dancer in this new film Hustlers which is inspired by a true story of strippers who are preyed upon by wealthy customers. It revovles around It’s simply lots of sleazy men being taken for a sleazy ride

She plays Ramona, an experienced stripper who acts as mentor to newcomer Destiny (Constance Wu), and teaches her all the pole moves — the stag, the reverse stag, the scissor-sit, the half-nelson, or maybe I’m beginning to think back to ITV’s Saturday-afternoon wrestling. At any rate, there’s quite a repertoire.

The story pings between 2007 and 2014, when a journalist (Julia Stiles) piecing the story together interviews all the protagonists.

Following the 2008 financial crash, pole-dancers suffer a direct hit; the Wall Street bankers don’t flash the cash like they used to.

So Ramona thinks, why don’t the strippers start stripping the assets of bankers who still like to party, and who, after all, were responsible for the mess everyone’s in?

They begin spiking men’s drinks with a cocktail of ketamine and MDMA, two drugs which together make the victims woozily incapable of protecting their pin numbers.

We see this happening a lot, which is where the narrative suffers. This is not a sophisticated scam and the film is not The Sting, or American Hustle, or even Ocean’s Eight. It’s simply lots of sleazy men being taken for a sleazy ride.

Writer-director Lorene Scafaria does her best not to make the women look sleazy, too — they’re just trying to earn a buck to support their grannies, kids, themselves — but with limited success. Nor can she stop Hustlers getting rather tiresomely repetitive.

She tries to jolly things up with a lively soundtrack and other devices such as slow-motion, but not even a slow-mo J-Lo can quite overcome the paucity of the plot.

Still, among the largely female audience at the screening I attended, it went down great guns. It would make the perfect hen party film — unless the stags are out on the same night, heading for a strip joint.

A right royal return to Downton!

Verdict: Back in the Abbey bit

An early Seventies episode of Upstairs, Downstairs, an ITV period drama of beloved memory, revolved around a visit to the big house in Belgravia by the King and Queen.

It was a good hook then from which to hang myriad storylines about class, deference, snobbery and anxiety, and it remains one now, as an ITV period drama of much fresher memory, although no less beloved, is given a big-screen makeover.

The eagerly-awaited film version of Downton Abbey arrives in cinemas today, following Monday’s widely-publicised world premiere in London. That was already my second viewing of a movie which gives us what we never expected to see: the Earl of Grantham’s second chin wobbling in empathy, Mr Carson’s eyebrows beetling in consternation, the Dowager Countess of Grantham’s lips pursed in disapproval, all in gigantic silver-screen form. 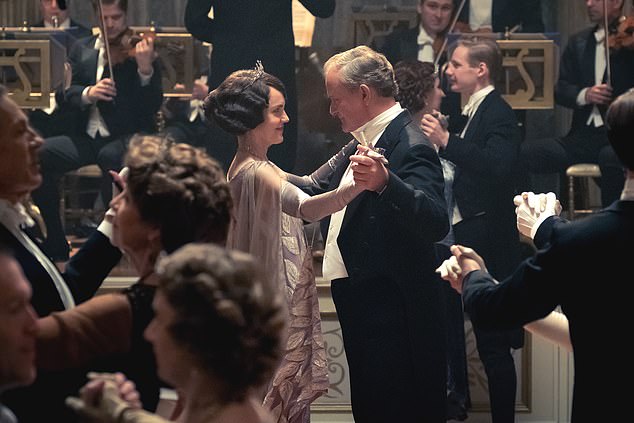 The Downton Abbey cast are back in this film-version full of compacted plots and sub-plots, some compelling, some preposterous, some purring with early promise then fizzling out, just like on the telly

The characters pick up pretty much from where they were last set down.

But soon he is summoned out of retirement to help prepare for the visit of King George V (Simon Jones) and Queen Mary (Geraldine James).

There is a marvellous moment when, granite of both countenance and purpose, he strides bowler-hatted down the drive towards the great house.

An unseen orchestra swells, as when anything momentous happens in movies. Sylvester Stallone as Rocky rising from the canvas, John Wayne squaring up to the Comanche, Carson returning to ensure the kedgeree is on the sideboard in time for breakfast, that sort of thing. 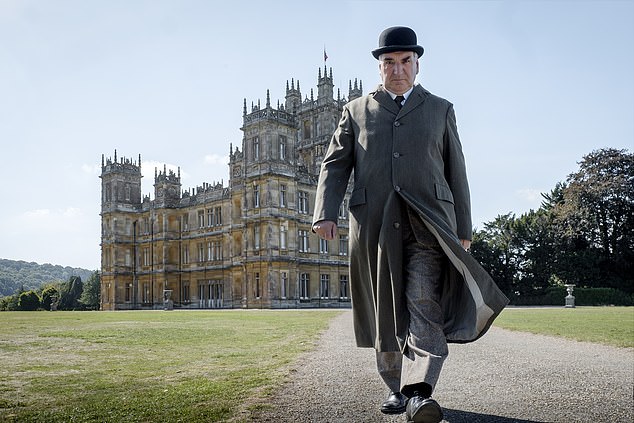 Actually, that’s where the challenge lay for Downton’s creator Julian Fellowes, who wrote the screenplay. Could he and U.S. director Michael Engler, a TV veteran without much feature-film experience, really make their story properly cinematic?

The answer is yes, up to a point. The lavish production values and meticulous period detail, last seen on TV on Christmas Day 2015, transfer splendidly to the big screen.

But in essence, even though the characters are 10ft high, this film is nothing more, nor anything less, than an entire series in miniature. It is full of compacted plots and sub-plots, some compelling, some preposterous, some purring with early promise then fizzling out, just like on the telly.

Knitting them all together is the overnight stay of the King and Queen, during a royal tour of Yorkshire. It is 1927. At dinner, His Majesty wonders whether old Lady Grantham (Maggie Smith) was affected by the social upheaval caused by the previous year’s General Strike?

‘My maid was rather curt with me,’ she tells him, a nice reminder that Fellowes is capable of writing very funny dialogue. As ever, much of it comes from Dame Maggie’s mouth, spat out past the plums.

Downton fans know she is at her most comical when she is in high dudgeon. Here, her dudgeon could hardly be higher.

The Queen’s lady-in-waiting, Lady Maud Bagshaw (Imelda Staunton), is her cousin, but they have fallen out over the question of who will inherit Lady Bagshaw’s fortune.

The Countess believes it should be her own son, the 7th Earl (Hugh Bonneville). Lady B has other ideas. Meanwhile, there is similar indignation below stairs, what perhaps we might call low dudgeon, because the King’s pompous butler (David Haig) has informed the servants that the royal household will be taking over their jobs for the duration of the royal visit.

This means that Mrs Patmore the cook (Lesley Nicol) is to be usurped by a comedy Frenchman (Philippe Spall). She’s understandably furious, as we would all be if a comedy Frenchman elbowed us out of ze way, demanding ze vanilla pods. But dopey Daisy (Sophie McShera) can’t fathom why anyone cares.

There used to be a time when Daisy couldn’t fathom anything. She barely seemed to know her own name, let alone a coulis from a consommé. But actually Daisy has discovered confidence. ‘All this fuss for a man and woman we don’t even know,’ she chirps.

The counterbalance to Daisy’s firebrand republicanism is the ardent royalism of Mr Molesley the footman, beautifully played for laughs by Kevin Doyle (who claims to have borrowed his awkward curtsey from Theresa May).

Yet republicanism rears its brazen head elsewhere in the story; how and where I must let you find out for yourself.

What you can probably guess, however, is that the Downton staff contrive to get the better of the royal retinue, albeit in ways that belong more to the plotting of a Chuckle Brothers sketch than a grown-up feature film.

Someone has been pinching silver knick-knacks. The boiler’s broken, although we know the oven still works because — spoiler alert — Lady Edith (Laura Carmichael) has a bun in it.

There are broader issues to grapple with, too.

Fellowes has a tasteful little grapple with Twenties attitudes to homosexuality by making Mr Barrow (Rob James-Collier) fall for a chap in the royal household, while Lady Mary (Michelle Dockery) is beginning to wonder whether the heyday of great landed families might be over.

Indeed, she’s so remarkably modern she uses the term ‘conspiracy theory’ fully 40 years before it was coined.

Still, Fellowes can be forgiven the odd anachronism, and for squeezing in too many storylines. After all, they are only there as springboards for our favourite characters.

Happily, creepy Mr Bates (Brendan Coyle) doesn’t get much more than a limp-on part, to the relief of those of us who still rather wish he’d gone to the scaffold in series five.

And that, finally, is the key to enjoying this movie.

There’s absolutely no point seeing it if you don’t already know who all these people are. If you do, how can you possibly resist?

Love, life and childbirth in a film to break your heart

For Sama is a gripping Arabic-language film about the Syrian civil war, set in the beleaguered city of Aleppo, and containing the single most extraordinary image I’ve seen in documentary cinema if not ever, then certainly all year.

The co-director, with the British filmmaker Edward Watts, is Waad al-Kateab, who has constructed it as a kind of love letter to her young daughter, Sama. It is also a letter of apology, full of contrition on behalf of her and her doctor husband for bringing Sama into a world where Russian warplanes deliberately drop bombs on hospitals, to break the spirit of those rebelling against the dictatorship of Russia’s ally, President Assad.

It chronicles the fight, not so much against Assad, as to stay alive and unbroken. 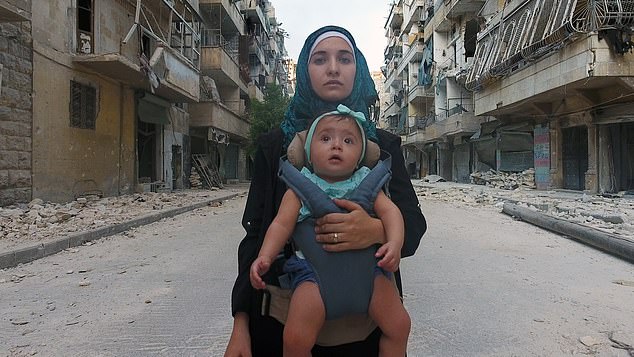 Small events assume huge meaning, such as a man giving his thrilled wife a persimmon in a city devoid of fruit and vegetables.

As for that extraordinary image, it comes about two-thirds of the way through, when a mother in the final stages of pregnancy is caught in a bomb blast.

She seems to be dead. So does her baby, delivered by Caesarean section, despite the best efforts of the medics to find life.

I’ll say no more. But if you can find this documentary, see it.