Jean-Claude Juncker risked fury today as he claimed British people were only ever ‘part time Europeans’.

The outgoing president of the European Commission said ‘from the very beginning’ the UK had not been fully committed to the EU.

He labelled a ‘tragedy and a failure’ but insisted he was in no way responsible for the current chaos surrounding the UK’s split from Brussels.

The comments from Mr Juncker came as he prepares to step down from his role in a matter of weeks.

He will be replaced as the head of the commission by Ursula von der Leyen on November 1 as his five year term comes to an end.

Meanwhile, European Parliament president David Sassoli today raised the prospect of MEPs vetoing a new Brexit deal if it does not include the Irish backstop.

Separately, Michel Barnier took a swipe at Downing Street as he said the EU was still waiting for ‘concrete, legally operational proposals’ from the UK on how to break the current impasse.

Mr Juncker reportedly told the Euronews TV channel: ‘The British were told for more than 40 years that they were in but they didn’t want to share all the policies that have been decided. 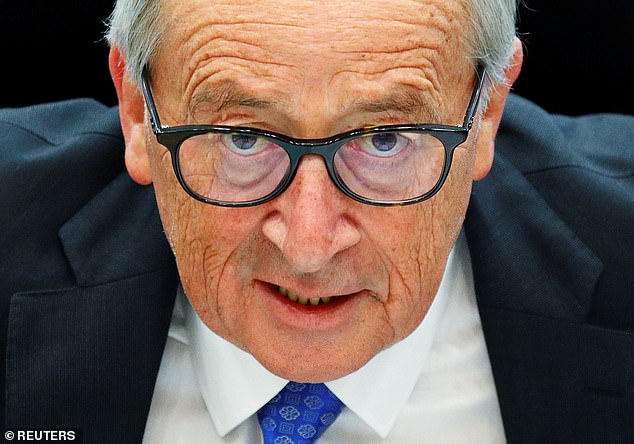 Jean-Claude Juncker, pictured in Brussels yesterday, today claimed that Britons were only ever ‘part-time Europeans’ 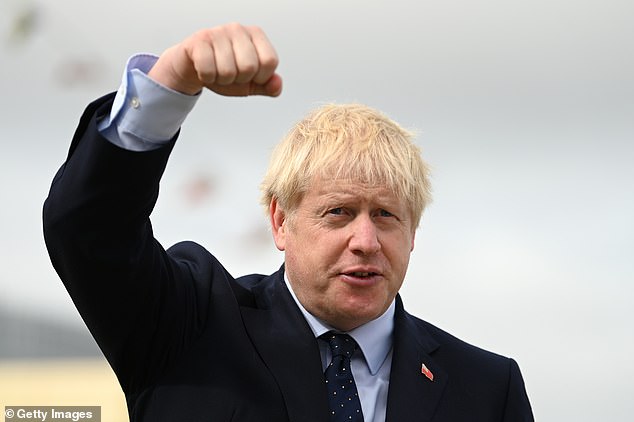 He added: ‘It is a tragedy and it is a failure, but I have to say I don’t think it is mine because I didn’t decide to have this referendum.’

Mr Juncker also said the UK should not have been ‘surprised’ by the 2016 Brexit vote because ‘if you are telling the people over decades that this is not exactly what we wanted’ voters are likely to respond in a ‘negative way’.

His comments, reported by The Telegraph, came after Boris Johnson said he is ‘very hopeful’ of a Brexit deal despite Mr Barnier’s apparently pessimistic outlook.

The Prime Minister insisted the ‘landing space’ for an agreement was becoming clear, amid fevered speculation that a watered-down Irish backstop could pave the way for a deal to be agreed.

The PM last night moved to quash claims he was wavering over the full removal of the pivotal Northern Irish border backstop, saying he would ‘insist’ it was scrapped.

But aides have been examining proposals for arrangements that would apply only to , rather than aligning the whole UK with EU market rules.

On a visit to HMS Belfast in London today, Mr Johnson said: ‘I’m very hopeful that we will get a deal, as I say, at that crucial summit. We’re working very hard – I’ve been around the European capitals talking to our friends

He added: ‘But if we have to come out without a deal on October 31, we will be ready.’

Speaking at the European Parliament this morning, Mr Barnier said he was ready to look at ‘any concrete legally operation proposals from the UK’.

Mr Sassoli also waded into the spat as he insisted there will not be any deal without an Irish backstop.

MEPs have a veto over any agreement and they are likely to exercise it if they believe the Irish border insurance policy has been watered-down.

‘There can’t be an agreement without a backstop. There won’t be one,’ he told reporters in Brussels.

‘I would like to stress this point: the United Kingdom hasn’t provided any alternatives… anything that has been workable.’

‘We are willing to go back to the original EU proposal which is that a backstop will only be added for Northern Ireland,’ he said.

'He's a participant': Kanye West jokes that he was anxious about spouse Kim being alone with Trump
Was Jackie O's split the REAL reason behind her weight loss?
Mac on... Tories plotting for No. 10
Shh! Anti-agers no one but you need know about: How do Hollywood celebs look so flawless at parties?
Couple's £1,000 trip to Turkey became holiday from HELL with husband left fighting for life
John Travolta rings in the new year with a new BALD look alongside 18-year-old daughter Ella Bleu
Fergie appeals to help Sierra Leone slum as Princess Eugenie praises her mother's charity work
Belgian student, 9, drops out of Dutch university after dates row