Felicity Huffman arrived in court on Friday afternoon ahead of her sentencing hearing in Boston.

Huffman, 56, is hoping to avoid serving a sentence of one month in federal prison that prosecutors have recommended in the case after she entered a guilty plea to charges of conspiracy to commit mail fraud and honest services mail fraud.

Those charges stem from her decision to pay a proctor to falsify her teenage daughter’s standardized aptitude test so that she could attain a higher score.

Huffman is the first parent who will be sentenced for their role in the scandal, and the US Attorney’s has asked that the court order Huffman to serve time behind bars for her actions.

Prosecutors made a few not-so-subtle references to Huffman’s fame and fortune in their sentencing memo, suggesting that probation at her California compound would be more like a vacation.

‘Neither probation nor home confinement (in a large home in the Hollywood Hills with an infinity pool) would constitute meaningful punishment or deter others from committing similar crimes,’ read the court filing submitted last week. 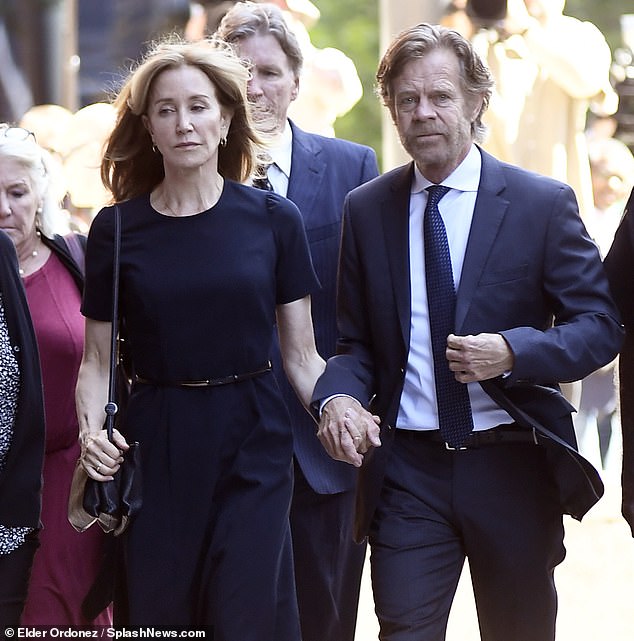 Desperate housewife: Felicity Huffman (above arriving in court) was seen arriving in federal court in Boston on Friday alongside her husband William H Macy, ahead of her sentencing hearing 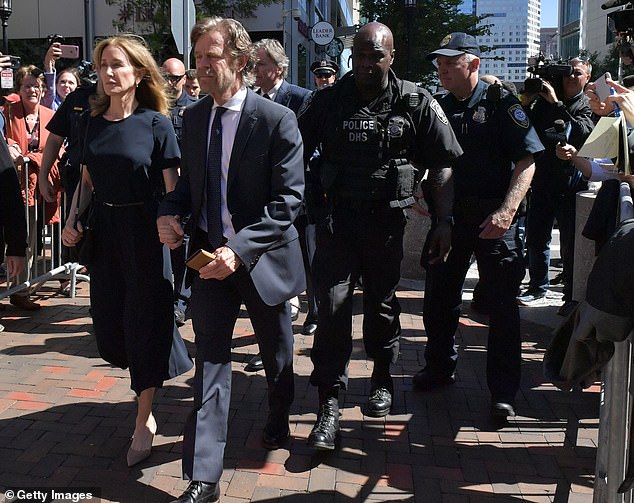 America crime: She was escorted into the courthouse by US Marshalls, wearing a simple black dress and nude pumps while holding Macy’s hand (above) 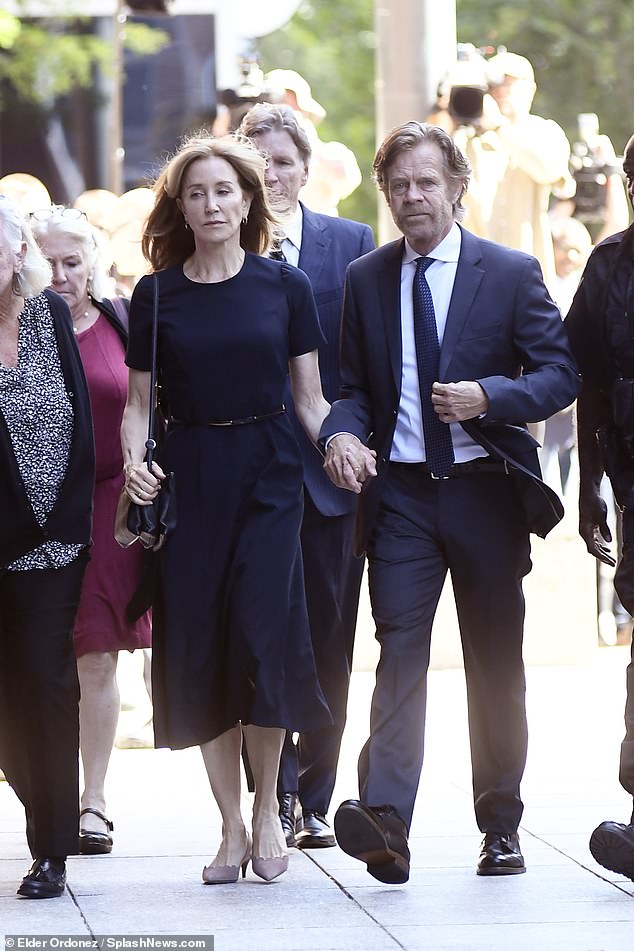 A somber Huffman touched down in Boston on Wednesday with her husband William H Macy ahead of her appearance in federal court.

The Oscar-nominated actress was in no mood to talk and hid behind a cap and sunglasses as she made her way though Logan International Airport.

Huffman was much more open in the letter she wrote to Judge Indira Talwani prior to her arrival in Boston.

In that letter, which was obtained by DailyMail.com, Huffman detailed the tearful confrontation she had with her daughter after her arrest.

That same court filing also revealed that on the morning of Huffman’s arrest, her teenage daughters woke up to find FBI agents with guns drawn to their heads.

‘I have broken the law, deceived the educational community, betrayed my daughter, and failed my family,’ wrote Huffman in her letter to Judge Talwani.

‘When my daughter looked at me and asked with tears streaming down her face, “Why didn’t you believe in me? Why didn’t you think I could do it on my own?” I had no adequate answer for her.’

Huffman continued: ‘I could only say, “I am sorry. I was frightened and I was stupid.”‘

She then explained how this one decision caused her entire life to fall apart.

‘In my blind panic, I have done the exact thing that I was desperate to avoid,’ said Huffman.

‘I have compromised my daughter’s culture, the wholeness of my family and my own integrity.’

The actress also got support from over 30 friends and family members, with her siblings, Eva Longoria, Macy, Desperate Housewives creator Marc Cherry and more writing letters on her behalf that were filed in court.

In an odd twist, the judge’s decision could mean that Huffman spends next Sunday night behind bars or at the Emmy Awards.

Her Netflix series When They See Us is nominated for 16 Emmys, though she was not among the acting nominees for her work on the program.

Huffman portrays Linda Fairstein, the former chief of the sex crimes unit at the Manhattan District Attorney’s office, in When They See Us, which is directed by Ava DuVernay.

The actress has been nominated for five Emmys and won the award for Outstanding Lead Actress in A Comedy series in 2005 for her work on Desperate Housewives.

Huffman admitted to paying $15,000 to a fake charity to facilitate cheating on her daughter Sofia’s SATs in April.

Soon after the news broke, the actress released a statement saying she was ‘ashamed of the pain I have caused my daughter, my family, my friends, my colleagues and the educational community.’

The  actress also stated: ‘My daughter knew absolutely nothing about my actions, and in my misguided and profoundly wrong way, I have betrayed her.’

Federal prosecutors are asking a judge to sentence her to a month in jail for her role in the sweeping college admissions bribery scandal.

US Attorney Andrew Lelling recommended in filings submitted last week in Boston that Huffman spend 30 days in jail because she acted ‘out of a sense of entitlement, or at least moral cluelessness.’

Huffman’s lawyers argued she should get a year of probation, 250 hours of community service and a $20,000 fine instead.

Her lawyers said in their reply to this memo on Thursday that prosecutors were ‘comparing apples to oranges’ in the case law they cited in their brief.

Federal documents show that while Huffman worked alone to iron out the details when the couple’s first daughter had her SAT changed by a proctor to improve her score, Macy was aware of the situation and the payment came from the couple’s joint account.

He in turn took a more active role in organizing the younger daughter’s fraudulent SAT, agreeing to the money and a set place and time much like his wife had done one year prior with their other child.

In that case however, the couple’s daughter achieved the results she had hoped for on her own and the mastermind behind the operation was informed that she would not be needing to submit a fraudulent score.

Huffman paid a $15,000 ‘charitable contribution ‘to participate in the college entrance exam cheating scheme on behalf of her eldest daughter,’ states the complaint.

‘Huffman later made arrangements to pursue the scheme a second time, for her younger daughter, before deciding not to do so,’ according to the documents.

The charging documents state that Huffman had the site where her daughter took the SATs moved from her own high school to a test center West Hollywood.

That was to avoid a teacher who knew the girl, who had also applied for and received extended time to take the test, from being present.

The girl’s test was then administered by a proctor who had flown in from Tampa and told investigators that he ‘facilitated cheating, either by correcting the student’s answers after the test or by actively assisting the student during the exam.’

That proctor, Mark Ridell, has also been charged.

In this case, Huffman’s daughter scored a 1420, which was a 400 point improvement from her PSAT results just one year prior.

The documents also include the transcript of a phone call between Huffman and the individual who facilitated the test in which she admits that her older daughter had assistance and expresses her desire for her younger daughter to get similar help.

In a follow up call just this past December, Huffman and her unnamed spouse spoke about their daughter wanting to get into Georgetown.

It was then decided that the young girl would take the exam twice, once on her own and once with help, to ensure she got the score necessary to get her into Georgetown, it is claimed.

Then, at the last second, the couple decided not to have their daughter take the test with assistance.

Huffman is one of two Hollywood stars wrapped up in the scandal.

Fellow actress Lori Loughlin is still in the pre-trial phase, with the Full House star fighting back hard and entering a not guilty plea against the claims she paid to get her eldest daughter into USC.

Loughlin and her husband are facing jail time because they opted to use the athletics route to gain their daughters admittance into University of Southern California.

This required daughters Isabella and Olivia, who had never before rowed in their lives, to pretend they were on crew teams.

In order to sell that, they posed for photos on ergometers, suggesting that they were both aware and willing participants in their parents’ plan.

Furthermore, Olivia knowingly had Singer’s team fill out her college applications according to the complaint.

‘On or about December 12, 2017, Loughlin e-mailed [Singer], copying Giannulli and their younger daughter [Olivia], to request guidance on how to complete the formal USC application, in the wake of her daughter’s provisional acceptance as a recruited athlete,’ states the complaint.

‘Loughlin wrote: “[Our younger daughter] has not submitted all her colleges [sic] apps and is confused on how to do so. I want to make sure she gets those in as I don’t want to call any attention to [her] with our little friend at [her high school]. Can you tell us how to proceed?”‘

In response, Singer wrote an email ‘directing an employee to submit the applications on behalf of the Giannullis’ younger daughter [Olivia].

Loughlin and Giannulli ‘agreed to pay bribes totaling $500,000 in exchange for having their two daughters designated as recruits to the USC crew team – despite the fact that they did not participate in crew – thereby facilitating their admission to USC,’ according to the documents.

The couple emailed Singer in 2016 about their daughters college prospects, stating that they wanted to do the necessary work to see that the girls got into USC as opposed to ASU.

Kate Middleton ends maternity leave with visit to wildlife garden
My dad is just like Apu and he should STAY in The Simpsons
Boeing 'did not tell pilots' about flaw that is blamed for deadly Lion Air plane crash in Indonesia
Carrie Ann Inaba joins The Talk as permanent replacement for Julie Chen
Is this the new Laurel of Yanny? Internet is divided over Sesame Street clip with Grover 'cursing'
El Chapo 'gave Enrique Pena Nieto $100million bribe' while he was on the run
Mother who has a RHINO HORN growing out of her head turns to Dr Pimple Popper for help
Cafeteria worker fired for giving lunch to student that had no money REJECTS offer to be rehired