The wife of a ‘grumpy and very vocal’ soccer coach came up with a genius way to reveal the gender of their second child – by getting the referee to give him a ‘pink card’ on the sidelines at a football match.

Cristian Materrazi is the women’s soccer coach at Fairmont State University in West Virginia, and his wife, Courtney, is the women’s volleyball coach.

Courtney decided to announce the gender of their second child in a very creative way with the backing of her husband’s team, on September 1. 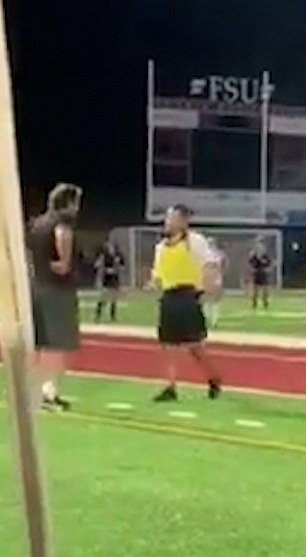 The ball had gone out of play over the team bench and the referee took the opportunity to call Cristian over.

He told him that he had enough of him talking and Cristian responded with asking the ref, ‘are you seriously giving me a card right now?’ according to bystander Abbey who filmed the whole thing.

The footage then shows the ref showing a stunned Cristian a pink card, rather than the normal yellow or red cards.

Suddenly all the players and those standing on the sidelines cheer. 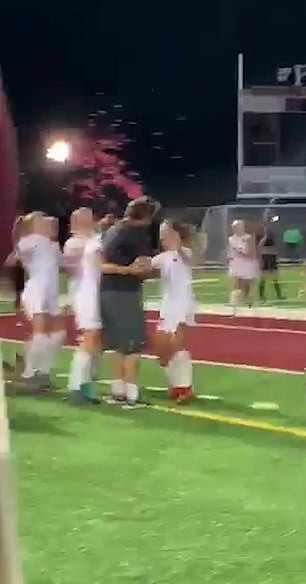 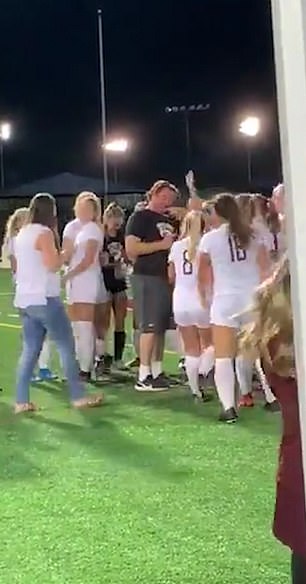 The female players rush over, screaming in delight and hug their stunned coach

The female players rush over, screaming in delight and hug their stunned coach, as it dawns on him he is having a daughter.

Pink confetti is thrown in the air by the excited female team.

The girls, in their white strip, jump up and down excitedly, continuing to throw more confetti at a shocked but delighted Cristian.

‘Cristian is a very vocal coach on the sidelines and thus him getting a card would be nothing new!’ said Abbey.

‘The women’s soccer players were told the gender the day before so they could prepare the bench with hidden bottles and piles of pink confetti,’ Abbey added.

$200Okay reward in South Australia homicide of father who vanished after getting back from Thailand
David Silva opens up on struggles when son Mateo was born prematurely
Mark Judge's college girlfriend claims she has repeatedly asked to be interviewed by the FBI
Taxpayers will fund £2million-a-year bill to protect Islamist hate preacher Anjem Choudary
Police fear a STRANGER murdered pregnant woman stabbed to death in her bedroom
Renaissance 'comic strip' reveals fellow artists mocked Leonardo da Vinci for his red hair
New Zealand is hit by 5.3 magnitude earthquake
McDonald's bosses vow to step up efforts to combat litter as they join UK clean-up campaign