Police have arrested five people, including the Extinction Rebellion founders, over a plot to cause disruption at Heathrow tomorrow – but organisers say tomorrow’s protest will still go ahead.

Roger Hallam, the founder of the environmental campaign group, and fellow campaigner Mike Lynch-White, were planning to fly planes in the exclusion zone around Heathrow on Friday.

They were both arrested at a cafe in Bethnal Green, east London, earlier today according to a splinter group of Extinction Rebellion, but separate from it, called Heathrow Pause.

Met Police have confirmed that two men were arrested in Bethnal Green, east London and two women and one man were arrested, in Highgate, north London.

Despite the arrests, Heathrow Pause has claimed their plan to fly drones in the 5km exclusion zone around Britain’s biggest airport on Friday, will continue, potentially causing misery for passengers. 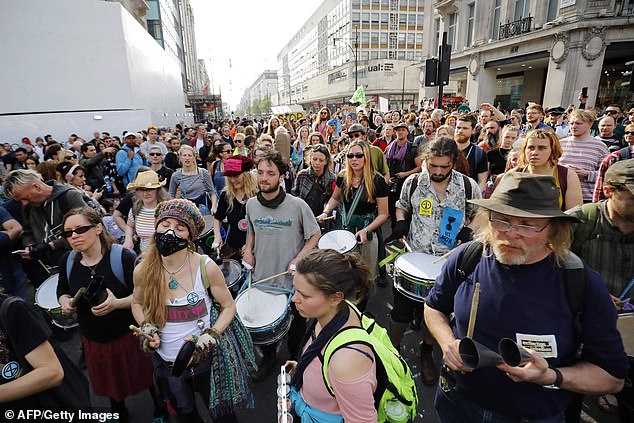 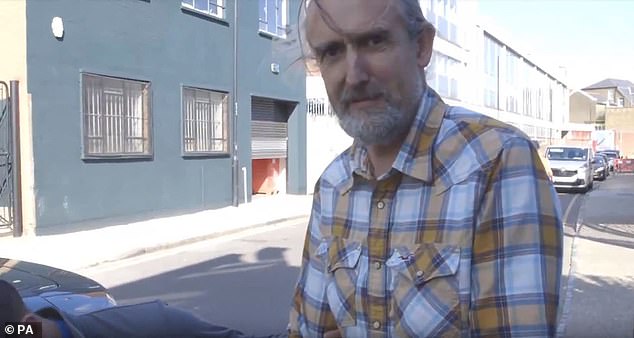 Roger Hallam, a co-founder of the Extinction Rebellion group, being arrested in Bethnal Green, east London, on Thursday afternoon over plans to fly drones near Heathrow Airport 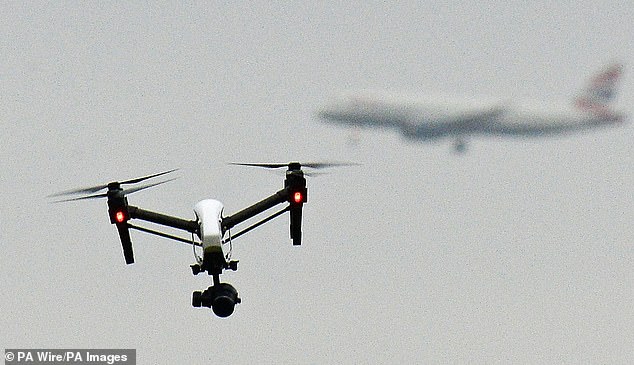 Despite the arrests, Heathrow Pause has claimed their plan to fly drones in the 5km exclusion zone around Britain’s biggest airport on Friday, will continue, potentially causing misery for passengers (stock image)

In a tweet they said: ‘The action will carry on exactly as planned, peacefully and non-violently, regardless of today’s events.

Video footage shows Mr Hallam and Mr Lynch-White being handcuffed by plainclothes officers and put into the back of unmarked vehicles this afternoon.

The three men and two women, aged between their 20s and 50s, were held on suspicion of conspiracy to commit a public nuisance, police confirmed.

Heathrow Pause previously said it has ‘no choice’ but to carry out the action and invited the Prime Minister to join the protest.

It said: ‘The current Prime Minister is on record for saying his opposition to Heathrow expansion is so profound that he would ‘lie down in front of the bulldozers’.

‘We invite Boris Johnson to join us in flying a drone and showing his commitment to stopping Heathrow expansion and addressing the climate and ecological emergency.’ 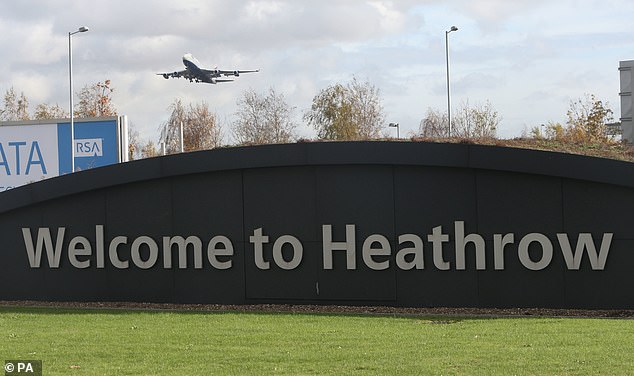 Climate change activists have held a number of disruptive protests this year.

Most notable was the shutdown of a number of sites in central London in April by Extinction Rebellion, including Oxford Circus and Waterloo Bridge.

Deputy Assistant Commissioner Laurence Taylor, said: ‘We have carried out these arrests today in response to proposed plans for illegal drone use near Heathrow Airport which protest group Heathrow Pause have said will take place tomorrow morning.

‘Our policing plan is aimed at preventing criminal activity which poses a significant safety and security risk to the airport, and the thousands of passengers that will be using it. We have warned previously that arrests would be made if this activity continued.

‘In these circumstances, we believe these arrests to be a proportionate response to preventing criminal activity that could significantly impact on a major piece of national infrastructure.

‘We remain fully prepared for the planned protest tomorrow, and will work quickly to identify criminal activity and arrest anyone committing offences.’

A Heathrow spokesman said: ‘Flying a drone within 5km of Heathrow is illegal and any persons found doing so will be subject to the full force of the law.’

He added: ‘We agree with the need to act on climate change but driving change requires constructive engagement and action.